This last weekend I got the chance to play in a local tournament, the Guardian Cup Lite 8.25. One of the sad things about being a TO of one of the larger tournaments in my city is that I don’t get to play in said tournament and miss out on the chance of ITC points. My city has been a bit dry as of late when it comes to tournaments as well, so the only option has been to travel, which I can only do so much.

I had an idea that would allow me to host and play in a smaller one day Rogue Trader type tournament. I took care of the behind the scenes work, scheduling, prepping, calendar, information, and lead setup and clean up. For the tournament though I brought in two other judges and did a triumvirate system to judge games, make rules calls, and enter in data. My friends Eben (online known as Pretre – The Rumor Monger Master), and Jeremy (online known as Mikkhaillenin or the French Overlord). Together we planned to play and if someone had a rules issue against one of us, another would judge.

My reasoning for the above mentioned concept was rather simple. It was to be a smaller tournament – 30 players or less – and I can count the times I’ve had to make rules calls for games pretty much on one hand in the past four events I’ve ran with two of them being larger two day GT’s. I felt confident that we could all play, enter in data, make rules calls, and remain transparent with the event. I trust both those other gentlemen as they are very rules knowledgeable and great guys to boot.

We set up for 30 players with FAT mats on each table. Big shout out to the crew from TSHFT that loaned us some FAT Mats and brought some terrain to showcase their new line of sight blocking terrain. It should work great in my opinion for next weekends event. We ended up with 23 players and were ready to rock. Note to self: always have a ringer ready to play in the event of odd number of players.

The plan is pretty simple – Priests run with the Cents with poor mans perfect timing (auspex) and feel no pain. This does make the Centstar T4, but FNP has been pretty clutch in many occaisions. Anything that can keep the star alive longer is good news . 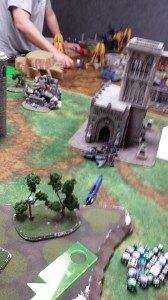 Hunter was running a Raccoon (Clan Rakkan) deathstar of bikes kitted out with storm shields, lightning claws so he had a 3++ invulnerable and 4+ Feel No Pain. He had a few other bike squads and two Imperial Knights – an Acheron and a Crusader. We were both running elite armies that couldn’t necessarily handle attrition well so it was important to me to be the one attirioning him.

He had his bikes central and his knights on either side with the Crusader on my right and Acheron on my left. I pushed hard right and went after the Crusader first doing 4 hull points round one with my drop podding cents. Turn two had his Crusader dead and my DP Cents dead from his grav bikes. Turn three I went after the Acheron and got him down to one hull point and my Dreadknight could not finish him off in assault, allowing him to assault my star with the Bikestar and the Acheron. I actually weathered things very well and took out the Acheron with my Libby’s hammer. Things were looking good. I planned on gating out and finishing off his other bikes so I could get in a position to win. Then I misshaped and rolled a 1, killing my Centstar. Ruh oh! I still had a chance to win on maelstrom, but couldn’t get the rolls to seal it. 1-10 loss for me! Great game and still a lot of fun.

Jason had a big Harlequin star with the Cast of Players, a Farseer, and an Autarch. Supporting that was a squad of Wraithguard in a Wave Serpent, 3 Hornets in a squadron, some Dire Avengers, and the Crimson Hunter formation. Lots of ap2 shooting that can be the bane of my existence.

I knew I had to take care of the Wave Serpent and Hornets fast, all the while avoiding the Harlies and positioning to safeguard against the flyers. It was a super close game that came down to the last few turns when his Crimson Hunters wiffed against Draigo and Loth who split off to get Maelstrom and score a three for the scouring. Had it ended turn 5 I believe he would have one or tied, but it went on and I was able to wipe out the Harley star and get on objectives to win the game. 10-0 win for me.

Kris’s list is actually one that worries me. Tons of bodies all with poison. There were something like 6 Venoms, 3 Raiders, a Ravager with the S5 AP2 guns, Scourges, Reavers. Kris is a more casual player who has come and gone in playing lately. She went first and didn’t have a lot to do so got on objectives. My first turn…oh what a first turn. My lone Dreadknight was poised to put some hurt on a couple of Venoms and their inhabitants when he perilsed rolling Sanctuary, then rolled a 1, then rolled double sixes for his leadership test! Bye bye Dreadknight and hello First Blood to my opponent. Heh heh.

I got pushed out of my left side with the loss of my Dreadknight, leaving the Tacs to take on half the army, so pushed hard right and worked on cleaning her off of the two objectives there, attempting to keep up on Maelstrom and whittling down her forces. The drop pod cents were allstars this game, absorbing a ton of Venom firepower and those FNP’s were super clutch in keeping them alive. If Kris had more experience I think she would have won, but in the end I held her two objectives and contested the other two, and was also up on Maelstrom. 10-1 win for me.

I ended up 7th out of 23 so not to shabby and nabbed some ITC points. We were able to give out prizes for Best General, Best Paint, Best Sports, and Best Overall with some left over to raffle off.

Thoughts For Next Time

Ringer, ringer, ringer. Need to scrounge up a ringer for the events. Someone to round things off and make it even if need be. I feel bad about giving a bye, but we had someone step up most of the time so that was good.

I’m also looking into getting more L shaped terrain as what was at BAO. I’ve actually found some cheap 40W lasers cutters on eBay so I might end up doing that as it sounds fun and I would like to learn something about that. The L shaped terrain added a great dimension in my opinion and added another depth to deployment allowing some protection against alpha strike armies. I’d like to find a cheap alternative to develop those pieces for my events.

In the end, having some help score and judge was pretty awesome. We had no issues that I was aware of and people seemed to have a great time. We even had some out of towners as one gamer was visiting from Hawaii and borrowed my Necrons to play. Rupert came all the way from Canadia and took Best General with his Eldar.

My list is going to change a bit more as I want to add Locator Beacons to my drop pods for some Gating deep striking shenanigans. I can’t use them first turn as the model has to start on the table that turn to use it, but turn two and later it should be good to go. Well that’s all from me for this weekend’s article! Hope you enjoyed the report and happy gaming.

Hey CaptainA, thanks for organizing and putting on such a great event! Was well worth making the trek down from Canuckistan to spend some time in PDX and meet new peeps.

The concept of judges joining in worked well for this scale of event and im glad you were able to play.

Sorry I couldn’t hang around any later, I would have liked to have seen the end of such a fun day, but that’s how it goes sometimes. Who ended up taking best overall?

Will be glad to come down again for another event!
Cheers

Glad you could make it! From a numbers perspective, you took every category, except sports. Did Jeremy contact you about the gift cert? If not lets get that taken care of.

Sounds great! I’m hoping to pull off something smaller with my mini ITC events (ie both playing and TOing).

Can you talk to me more about this laser cutter thing? What is that? What does it do?

I really wanna make it to Warporch. We’ll see!

Laser cutter is exactly like it sounds. A laser in a metal box that runs through a program and cuts or engraves material. This one would be able to cut MDF and Acryllic. I’m thnking about making terrain and custom objective markers.

Ah HA! Makes sense! I know that the NOVA folks were talking about some kind of professional foam cutter that they used. I’m interested in anything that will stream line terrain building.

Oh, and it should go without saying that I’d love to see you at WarPorch! 😀

Thanks! I was pleased how it turned out.