You are here: Home › 40K › Wither Art Thou, Astra Militarum?

Rawdogger here and today I wanted to talk about a 40k army near and dear to my heart, the Astra Militarum. With nothing more than a lasgun in their hands and a whispered prayer to the Emperor on their lips, who can say they don’t have a soft spot for the plucky humans as they try and defend humanity from the horrors of the 40k universe? 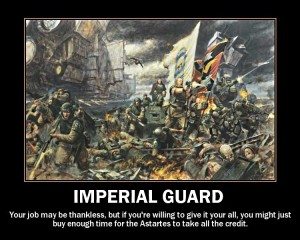 Recently, I’ve noticed a sharp downturn in the presence of the Astra Militarum in competitive events. Even as three sources have become the norm in ITC competitive tournament play I have been seeing less and less of them at big name tournaments throughout the country. I remember not too long ago we were seeing a lot of people rocking the Lascannon blobs with Ignore Cover orders and Pask in Leman Russ Punishers giving orders to split fire an Executioner. What could be the cause of their decline in their attendance? I thought I’d take a few moments to highlight some of the reasons I believe we are not seeing Astra Militarum on the tabletops of competitive tournaments.

They Ain’t THAT Cheap – Guardsmen clock in at 5 points per model so taking them in any significant amount will start to add up really quickly. The most popular method of taking your standard Guardsmen is to take multiple infantry squads and blobbing them up to make gigantic units but a blob of 50 Guardsmen will run you 250 points before adding any heavy or special weapons to the squads. Their Leman Russ tanks also clock in at a minimum of 120 points and the super popular 5th edition Vendetta now costs 170 points for 3 twin-linked Lascannon shots from a model that won’t come in when you want it to and will hit twice if you are lucky.

What’s an Armor Value? – Let’s face it, an AV of 14 don’t mean JACK in a game that spams grav and D slangin shenanigans in every other army on the table top. As stated above, the armored behemoths of the Astra Militarum aren’t exactly cheap in the points department and when you have so much long range armor shredding weapons on the board the poor Leman Russ Battle Tanks are looking less and less appealing.

Bigger Sometimes Isn’t Better – A common retort by Astra Militarum players regarding competitive game play is that they can drown their opponents in bodies. While they definitely can, and have access to Fearless due to Priests, any good player will just tar pit the unit with a hard to kill, fearless model on their own. Yes, your Guardsmen might eventually grind their opponent down via sergeants with power axes or other such things but your opponent will be tap dancing around your blobs while you do so.

They’re REALLY Easy to Kill – While the ability to blob up your Guardsmen does add a degree of surviveability the fact that a minimum squad of Eldar Jetbikes with Scatter Lasers can shred 8-10 of them per round does not bode well for the squishy humans. Blobbing up in the backfield only encourages death by barrage or drop podding flame templates.

Glass Cannons – A large part of the problem with Astra Militarum is that they hit hard but crumble as soon as any moderate firepower is leveled back at them. Take the Wyvern for example. This bad boy hits hard with 4 twin-linked strength 4 cover ignoring templates that have Shred for some reason. That sounds amazing but I’ve never had one of them survive more than 2 turns before their AV12 open-topped asses got blasted to kingdom come. 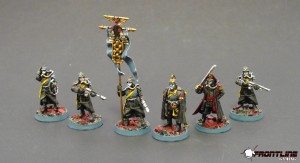 I think what it really boils down to is the age old issue of Codex Creep. Sadly, the Astra Militarum are just out-shot and over costed compared to the new codices we’ve seen released in the past year. When you have drop podding grav spam, D-slangin Gargantuan Creatures with a toe in cover, free weapons and transports, and whatever the hell the thing InControl brought to the BAO is you get a sullen acceptance that the Astra Militarum just can’t hang in the current competitive environment.  With the next codex release we need to see Guardsmen heavy weapon squads that clock in at around 10 points per model, a way that Guardsmen can  increase squad sizes without blobbing together, and weaponry that really speaks to the firepower that the Astra Militarum are known to possess.  Until then, I’ll keep plugging away with my Catachans and Steven Seagal (Stormlord) but that’s only because I’ve stopped trying to compete in competitive events long ago.

So what do you guys think? Are the Astra Militarum truly outclassed in the competitive 40k environment? What are some of your best tips and tricks when using your Astra Militarum armies?