Hello all!  Rawdogger here to give my initial impressions of the yet to be released Age of Sigmar.

The introductory boxed set is due to be released this coming Saturday and for the past few weeks the 4 page ruleset has been leaked (released) for the general public’s perusal.  The game features a simplified ruleset where unit’s stats to hit and wound are based on their own abilities and are not modified by the opposing player’s unit’s stats.  There is some damage modification stats from different weapons in the game or abilities from the units themselves but in general the roll needed to wound a dragon will be the same needed to wound a goblin. Games Workshop has tried to offset this seeming imbalance by giving characters and large monsters a high wound count to offset this mechanic and in general units will be hitting on 3’s or 4’s and wounding on 3’s and 4’s.  Please keep in mind that these are just my initial thoughts and I have not gone through the rules or each unit’s warscrolls with a fine tooth comb.  Speaking of Warscrolls, each unit from the factions in the now defunct Warhammer Fantasy were given Warscolls that allow them to be played in the new system, albeit with severely toned down powers and abilities.  Yes, some of the scrolls include silly rules such as riding and imaginary horse or talking to your models for bonuses to hit and wound but there aren’t many of these and honestly I don’t see anything wrong with a bit of silliness when playing a game of army men with other grown ass men. 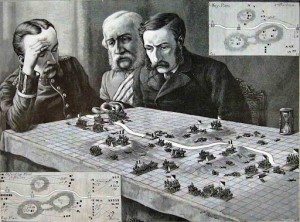 The 800 pound elephant in the room that everyone IS talking about are the complete and utter lack of points in the game system.  I’m not as well versed as some when it comes to knowledge of other game systems but I don’t believe there to be any other major miniature game systems that have no point costs.  Point costs go a long way in balancing a miniatures game and with Games Workshop not only leaving the point costs out of Age of Sigmar but emphatically stating that there would NEVER be any point costs included in the game they have certainly doubled down on their statements that they are a models company first and a miniatures game company second.  Now, there ARE some balancing factors in the initial release with the Sudden Death special rules.   Basically, if a player is outnumbered in model count by their opponent they can choose from a list of objectives on the Sudden Death table that will allow them to instantly win the game if they complete the objective.  This is nice but kind of leads to even further imbalances such as the outnumbered player choosing a relatively weak single Warscroll character to kill and win the game instantly.  There has been some talk of a books of scenarios that will let players know exactly what they are allowed to take and if that is the case we could see some type of game balance coming into play from GW.

One of the biggest complaints regarding Age of Sigmar is the seemingly impossible task of having organized play (i.e. tournaments) with this new game system.  I think this was the intent of the development studio as Age of Sigmar was clearly written as a true beer and pretzel game to be played with your friends and there is NOTHING WRONG WITH THIS.  Every game does not have to be playable in a competitive organized manner.  Does this mean that a set of organized competitive rules couldn’t be developed by the community to cater to the segment of the customer base that WANT to play in that environment?  Of course not!  Here are some ways that Age of Sigmar might be balanced to the point where organized competitive play would be possible.

Wound Count – This is one of the more prevalent ways that people are talking about balancing the game.  Both players would have an agreed upon amount of wounds that they were allowed to field.  This would make the decision of taking a 10 wound dragon over a 10 man squad of archers much more tactical for players.  The drawback to this method is that most 1 wound models are not equal in abilities and stats, i.e. a Goblin is not the same as a Chaos Warrior, etc.  People would also use this method to abuse the Sudden Death mechanic and take high wound low model count armies.

Warscrolls – Pictures from an email printed in Word Pad that are reportedly from GW themselves to game store owners (we didn’t receive one) have been floating around for a couple days in which the rep states that a good way to balance the game for competitive play involves limiting each player to a number of Warscroll types.  This would work if Games Workshop didn’t get greedy and leave unit sizes open ended which encourages model sales for large units.  Even if a unit cap is implemented we fall into the trap where an apple doesn’t equal an orange and a unit of 20 Goblins is NOT the same as a 20 man Chaos Warrior unit.

Point Costs – Something that has not been getting a lot of dialogue would be implementing an unofficial point cost to all models in the game system.  This would be a lot of work and would constantly have to be updated, as well as being COMPLETELY unofficial in nature.  A combination of using Warscroll limits (FOC) as well as point costs would be the most effective way of making the game system playable in an organized setting but would involve the most work and would incur the most negative feedback from the community.

I want to end this article by stating that there is nothing wrong with playing Age of Sigmar the way Games Workshop intended, imaginary horse riding and all.  There are many other game systems available for you to get your competitive rocks off with so why not have one game that you can enjoy being silly with while having beers?  Also, traditional Warhammer Fantasy players are rightfully upset and should not be jumped on for venting their frustrations.  Imagine if this happened to you 40k players and the game system you knew and loved was gone overnight?   I’m not saying that Games Workshop should be given a free pass for dumping Warhammer Fantasy and I’m also not saying that Games Workshop should be vilified for creating a simple tabletop wargame that plays differently than other traditional tabletop wargames. What I am trying to convey in this article is that personally I think Age of Sigmar looks to be a fun game that is meant to be played with friends but can definitely be modified to be a competitive organized tournament game as well, but it will take a lot of hard work and unity from the community, which is sadly a hard thing to come by in our hobby.

So what are your thoughts on bringing balance to the Age of Sigmar?  Unnecessary? What’ the best way you can think of to balance the game to allow organized play?