Portland, OR has a great mix of 40k gamers. There are competitive groups, narrative groups, casual groups, bloggers, and others as well. It isn’t hard to get a game in at the many different stores and clubs in the area and that has made it easy to make 40k my primary tabletop game of choice.

A couple of weekends ago the Ordo Fanaticus gaming club hosted another Annihilation tournament at their club on the Eastside of Portland. I had attended the first one and was one game away from victory. There were some heavier hitters this time around so I hoped I would do as good or better with my Decurion Necrons this time around.

To be honest, I felt my biggest opponent was going to be the heat. It was slated to be in the 90’s (don’t laugh, I’m from Portland where it rains for 9 months ayear! 90 feels like 120!) We were also upstairs in a pretty un-air conditioned place so I had a long day in the heat and had to stay focused as well. Some of the facts here might be hazy as my brain was fried by the end from the heat! 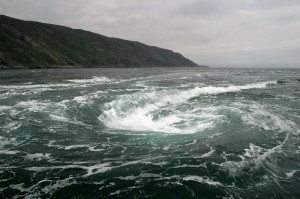 Bronson, the Mediocre Gamer, has found a version of Maelstrom that is becoming more popular in Europe and is adopting it for these rounds of tournaments. The concept keeps the flavor of Maelstrom, with players pulling cards from a deck to see what their objectives are that turn. The difference is in how the overall round is scored. At the end of each round, players compare their scores to see whom has the most points. The player with the most points “scores” that round and the first to four “scored” rounds wins the game. It works a bit like a tennis match.

The winner of the Maelstrom wins 5 points with the bonus book points still in play for First Blood, Slay the Warlord, Linebreaker, and the addition twist of fate tokens. Each game a player gets two tokens which can be used to redraw an objective, or re roll a die. If you use one, you give your opponent another bonus point. Players were also able to customize their Maelstrom decks a bit in only needing 28 cards of the 36 to be used in the event.

What this does is allows games not to be decided in the first turn by a lucky draw. It has happened to me before, where a player scored nine points in the first turn and therefore made it nearly impossible to turn around. Those types of situations are all too common for me in my Maelstrom games and is my biggest issue with that system. Adding a random component on an already random games makes it…too random! 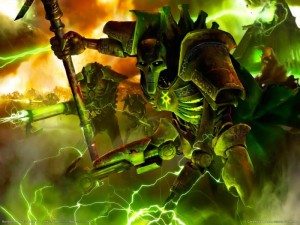 My list has come about with some ideas…”modeled” after Dr. Insanitron’s Necron list with some other ideas from The French Overlord. This is the light version as this tournament was supposed to be not so hardcore in the realm of list building. The event followed a lot of the ITC format for list building.

Round 1 – Cleanse and Control/Dawn of War

My first round was against Evil Bryan and his Double Steel list. Two Steel Legions. There were a ton of Leman Russ tanks witch pretty much every version you could think off. I knew I had a fine shot as everything in my list can hurt tanks, but he has the potential of a lot of firepower. His biggest problem though was his lack of mobility and the attrition that came with even my basic warriors able to do damage to his units. I pushed up along all fronts of our Dawn of War deployment and punished his lines one tank at a time. Solid victory for the Necrons.

Round 2 – Spoils of War/Hammer and Anvil

My arch nemesis! Burk! I played Burk at the last event in the final round for it all and here we were again with the same armies battling for victory one more time! Revenge is at hand! In our last game, my list was punishing his, but I just couldn’t pull the cards I needed. I focused on his ObSec units and deep struck my destroyers into his backfield as we were playing hammer and anvil and he totally outranged me. I went first and rushed up the midfield with my Wraithstar. His drop pods answered in return and put pressure on the objectives. I won the first round, he one the second round and we tied on the next two. The last round I was able to make it very hard to score and ended up winning 4 rounds to 3. It was a great, close game and a lot of fund.

Round 3 – Cloak and Shadows – Vanguard Strike

Third round had me against Sorienor. Last time we played, his Bully Boyz shoved it down my metal pipes, but this time he had a dual bike star list with SnarfSnarf (Zardsnark) a warboss, painboys, and lots of bikes! It is super fast and brutal. The hidden objective really helped me as I was able to score some crucial turns against his orks with round two seeing my Wratihstar score a key objective netting me 3 points with a special Necron tactical objective that I got on turn one. This allowed his big bike star to assault my Wraithstar turn two, but the Canoptek Harvest rule really came into play here as I was able to make a lot of great saves and stay locked in combat for the rest of the game. His second bike star got stuck in combat with my destroyers and I was able to hold them up long enough to do more scoring with my fast Scarabs and transport flyers. I pulled it out in the end with Sorienor just unable to counter my scoring each round. 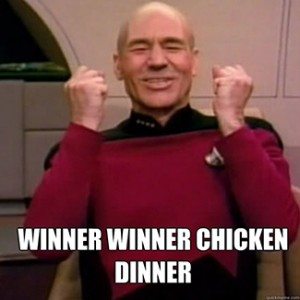 So the final results had me with 24 points and Pretre (the rumor warmaster himself) who also went undefeated at 23 points. Victory for me! I was pretty pleased as I was so close last time. I’m a wiener!

Overall I really enjoy this format of Maelstrom. We had some issues with how ties worked each round as both players scored a point with a tie this time, but the format is still being tweaked as a whole. It makes Maelstrom so much less punishing if you lose a bad round to bad card draws and makes it a much better game in my opinion. You might give a shot at your next Maelstrom game and see how it plays, especially if you haven’t been a fan of Maelstrom like me. In the end I had three great games that could have gone either way so I couldn’t be happier.

Thanks for the bat rep! Also, I really like that tweak on Maelstrom missions! I hope that catches on!

Also, I like that I know every single person that you played against and you. God, I miss playing tournaments…

sounds like a good change to maelstrom! Thanks for the report CaptainA. Any chance you’ll be available for a game first week of August? I’ll be visiting my home state from sunny Arizona that week and am hoping to get a game or two in while there.

With this format, is there any data on how often the player going 2nd won?

I would guess that there was a drastic imbalance.

We scored at the end of each player turn, so there wasn’t a big imbalance.

I went first in every game. There was talk that players thought going second was superior though.

My first game, I screwed up and scored at end of Game Turn, so going second was bad. After Bronson clarified, it was clear that going first/second didn’t matter.

Second was good, the first way. Typing is hard.

I love that format! My friend and I play mostly maelstrom and I hope it catches on. We’ll likely give that a try and see if it makes our games better.

Question: How are tourneys adjudicating the wraith whip coils when assaulting through difficult terrain? Do wraiths swing on Init 5 or init 1?