Here at the Frontline Gaming Studio in San Diego we have decided to begin a new campaign of Pathfinder. I, as the intern, have been taken up the responsibility of writing the campaign, and running every game session. Instead of opting for the traditional Pathfinder campaign setting I have chosen to write my own original story arc set in a grim-dark fantasy realm inspired by the Witcher series and the Warhammer Fantasy setting.

This campaign will be live streamed in its entirety over Twitch.tv, broadcasting ever Wednesday at 6:00 PM, using the Roll20 software where each player will Skype in and will have their webcam feed placed on the screen. The campaign will include detailed graphics (scenes will be pre-generated, and battles will feature a gridded map) as well as music and background audio depending on the scene (music and background conversations in a tavern, birds and wind in a forest, the clash of steel in a set piece battle) As a viewer, you will be able to watch each encounter, plot twist, and exciting moment as it happens as well as tune in to the dialogue and banter of the party as they progress through the story. Furthermore, we have decided to create an additional Player Character that will be reserved for a Twitch subscriber selected at random each week. This will be a pre-generated, in-setting, character that will allow our viewers to have a direct impact upon the campaign.

The theme of the campaign is a dark low-fantasy setting (rare but powerful magic users) in which viewers can expect to see scenes requiring the players to work through mysteries, find clues, and hunt down evil creatures and persons using their various investigative skills. Expect to see mature material as this campaign will attempt to portray a medieval world recovering from wanton warfare as vividly as possible. The scale of the campaign will be much larger than the heroes themselves, and their actions will be only a part, albeit an important one, of the larger narrative and struggles evolving around them. 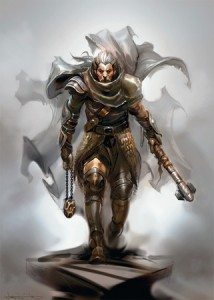 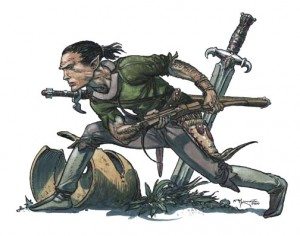 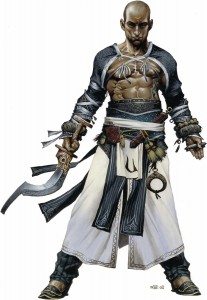 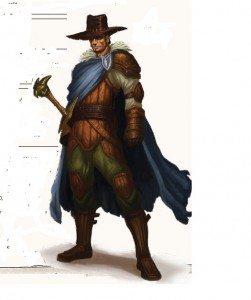 And of course the villain…sort of: 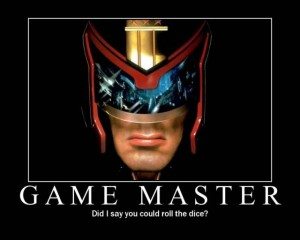 Here is a copy of the background for the first quest I have provided for the PCs:

Chapter One: ‘The Mists of Branwald’

The region that the actions centers around is called the Vehmic Empire; The Empire is a large swath of land ranging from a southern sea ringed by the metropolises of the Vehmic Heartland to the harsh, damp, and much less populated reaches of Norland and Ostland. The histories of these provinces are as ancient as they are bloody, as the recently (a mere half-decade before our story begins) overthrown noble houses of Rurik (Norland) and Vyatichi (Ostland) waged a century long war for dominion of the Northern Realms. Many thousands of soldiers, and innocents were killed in the long years of war, and the bitterness of that age still clings to the land.

The climax of the war came to be known as the Battle of the Red Frost, and was fought on the slopes of great hill where the fortress of Ostergaard still stands today (albeit in ruins). The battle, which was joined during the waning month of autumn, ended with amidst a blizzard that flew south from the Thorn Range to the north. As many men as were slain by sword, bow, and axe froze to death in their armor before they could reach their enemies. The house of Rurik emerged from the slaughter victorious, and in the next spring is armies swept across Ostland, pillaging, burning, and killing to gain recompense for over 100 years of bitter war. Not a decade later the legions of the Vehmican Empire, led by Emperor Arnulf von Alfheim, swept across the unified kingdoms of the north, and cast down the still battered and bloodied forces of Rurik V the Great. As the story opens, Emperor Arnulf is entering his twilight. His sons, Otto, Radulf, and Karl, each have a powerful following and equally powerful ambitions….while the ancient houses of the North are rumored to have survived the invasion. 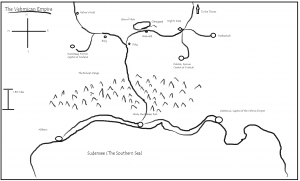 It is in this realm scarred by brutal war, constant looting, pillaging, and exposure to all the horrors and excesses of war that our adventurers find themselves. All four of them have seen their fair share of action and adventure (the quest begins with all PCs at level 3) by the time fate weaves them together at the Silver Doe inn in the town of Dolg. It is now 5 years after the Vehmican invasion, and a relative calm has settled over the lands. The emperor’s troops patrol the roads, and the towns have prospered from the massive influx of trade from the Vehmican Heartland. In the wilds however, nothing has changed. The North has always been a place of mystery, and for all time creatures from men’s darkest dreams have stalked its forests, and its mists. Our heroes must muster all their strength, cunning, and intellect to uncover the evils that stalk these lands, root them out, and destroy them if they hope to prevent the region from descending once more into the horrors of war. Beginning in the town of Dolg, the party hears rumors that trouble may be brewing in the nearby village of Branwald. The village lies on the shores of The Lake of Mists and at the foot of the Broken Mount, which houses the ruins of the great fortress of Ostergaard. Once set upon the path, it is up to our heroes to learn what it is they face, and stop it if they can. 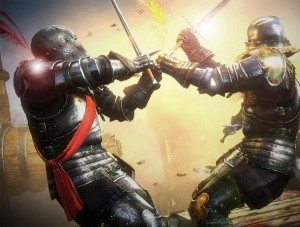 The campaign, beginning with the quest above, will last a full 8 sessions spanning eight weeks. The heroes will each begin at level 3, and will end the campaign at level 11 after having made their way through a variety of situations, and after solving many mysteries. They will uncover dark secrets, and even darker characters in their quest to find answers to the questions that will be presented in ‘The Mists of Branwald’. The party will be thrust into the middle of a brewing conflict that threatens to once again drown the region in blood, and they will need to choose whom they support. Are the Imperial authorities, who bring order at the tip of the sword, truly worse than the kings who bled their nations for over a century? Or are the old ways, complete with their hardships and boons, worth returning to at any cost?

Join us Wednesday nights to join the advenutre!

7 Responses to “Pathfinder Campagin: The Fall of Norland – introduction”