You are here: Home › 40K › Editorial › The Reinforcements Detachment 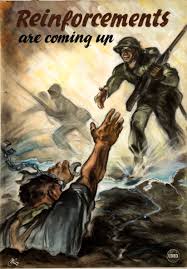 Loopy brings us an idea on how to implement Side Boards in 40k!

The idea of a sideboard is certainly not new to Warhammer 40,000, but the implementation of such a thing has always been thought to be a bit of a pain. With the advent of Detachments, it could be seen as nearly impossible to try and figure out which Detachment a unit came from when added to the list, particularly if a tournament organizer is going through twenty or more lists and an opponent has to go through the other player’s list in a short amount of time before their game begins. Factor in unit upgrades and you’ve got a real tangle on your hands.

This is why I figured it’d be useful to create the Reinforcements Detachment. This gives all players a choice to either use it or not while keeping the swapping-out clean. Using the Detachment also doesn’t unfairly benefit armies which are well-suited for specific tactics within their core units such as Tau and Space Marines while other armies need to buy specific units for this task such as Orks and Eldar.

Lastly, making this a Detachment forces the player who decides to use it to choose a single faction for their sideboard, use up a Detachment limitation, and give up Detachment benefits. Players will be trading one kind of flexibility for another.

It is my hope that this will bring flexibility to lists which allow them to face lists built for extremes, whether by simply allowing them to field a bunch of anti-air, some drop pods with melta, or simply three separate psykers in the hopes of generating just the right powers to face their enemies.

Muster our Reinforcements: While you only ever pay the points for this detachment once, when building your army, you may create up to three Versions of this Detachment, each with the same points level. Each Version may use whatever faction or units you desire within the confines of the other restrictions of this Detachment. Note that unique units may only be taken once across all Versions. During the generation of pre-game abilities, generate them for each Version of this Detachment separately.

Note that my point with this article isn’t to discuss the benefits or the negative aspects of sideboards in general, but to simply provide a more organized and equitable way of executing them. Please do leave a message in the comments below if you think this Detachment could be further refined.

30 Responses to “The Reinforcements Detachment”