Hello everyone, Frankie here to talk about the Game Empire ITC I just attended. Be sure to check out the Tactics Corner for more great tournament reports!

I decided to give the Thunderdome another go after their poor showing at the Guardian Cup 8, the Ocho. I took an upgraded list to the local ITC event lead by Harold Deathwolf for some leadership buffs. The local store down here is Game Empire and has some great players with some nasty lists. My first round I pulled an Astra Militarum list with a Baneblade, Pask in a Punisher, Plasmacutioner, two Wyverns, two Hell Hounds and a Valkyrie. This is going to be a tough match up especially with the amount of fire power Pask and the Baneblade have. He won the roll to go first which is for sure not good for the Thunderdome. I made sure to deploy some 2+ save lords in the front of both units. One roll to rule them all: I throw the dice to seize and it is a 6. Winner, winner chicken dinner! Just what I needed, I run both units straight towards his army giving him one turn to kill them. He fires away bringing 3 Battle Leaders down to 1 wound and shoots the Demolisher cannon which I am able to look out sir to little Fenrisian wolves. My turn two I bring on the Fire Raptor along with both units of Blood Claws. I am able to charge both Hell Hounds, one Wyvern, and Pask with the Plasmacutioner. He should have deployed them a bit farther away but was only a problem because I seized. I was able to kill all of those tanks with the strength 10 Powerfists and the Fireraptor was able to bring down the other Wyvern. That was the way the game went, unfortunately my opponent didn’t have enough firepower to bring down the two wolf units after my first charge. Space Wolf victory 11-1 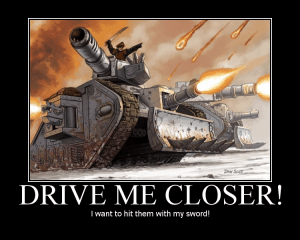 Game two I pull a Chaos player that took three units of zombies, Kharn, Typhus, A sorcerer, Vindicator and some Havocs. Kind of an odd list but not horrible at objective missions. Kharn and Typhus make two of those Zombie units a little scary even for the Thunderdome. I lose the roll to go first and deploy the little wolves in the front so that the Demolisher cannon doesn’t kill my Battle Leaders. I fail to seize but my opponent makes a big mistake and moves his bikes too close to my Thunderwolves. He is able to alpha strike one wolf squad down to a few Fenrisian Wolves and a few wounds to a couple Battle Leaders. I charge into the bikes wiping them out fairly easily. My other wolf unit fails the charge to the Zombies, unfortunately. He fires again killing more Fenrisian wolves and even a Battle Leader. He also charges into my other unit but forgets to cast Force on Typhus. I end up winning combat since the little wolves have a lot of attacks. I am also able to kill Typhus because my opponent accepted a challenge and got Power Fisted. Unfortunately my opponent made a few more mistakes and I was able to wipe out all the Zombies with my other wolf unit. It took 5 turns for me to get the Zombies off of the two objectives which had me sweating a little bit. Another Space Wolf victory 11-0. 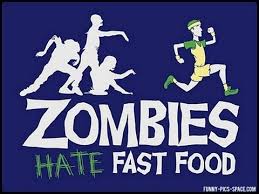 Game three I have a chance to win this thing as long as I keep my head on straight. I pull an Ork Army with a Stompa, Mega Nob deathstar, Two units of Trukk Boyz, and a bunch of Deffkoptas. Unfortunately for him he pulled me on a kill point mission. I also won the roll to go first which is what I needed since the Stompa has a seven inch, strength 10 blast. He tries to seize but is unsuccessful I run forward but didn’t think about model placement and left too much space between the front Fenrisian Wolves and the Battle Leaders. My opponent is smart and splits my leaders. He charges the Stompa into one end and the Mega Nobz into the other end. He quite easily wipes out the whole unit except for Harold who luckily is more than 6 inches from the combat and is able to leave combat. The other unit he charges with one Trukk unit and 2 Deffkoptas. I kill the whole unit of Boyz and one of the Deffkoptas. He fails his leadership and I am able to run them down. Now I have a chance, I charge the rest of my Battle Leaders into the Stompa! Maybe not the best plan but we’re going for it! The Fireraptor comes in as well and is able to kill one Trukk and stun the other. I get super lucky and do 11 penetrating hits to the Stompa and am able roll an Explode result. My opponent is not happy about that as I for sure rolled above average, and the Stompa went boom. The Stompa is also able to stomp two 6’s before dying taking 3 Battle Leaders with him. At this point I have a large lead on kill points and just need to run away. My opponent is able to pick up a few more killpoints with his Koptas. And loads up the Battlewagon with the Mega Nobz. My Fireraptor is able to kill the Koptas and the other Trukk. I try to run the Thunderwolves I have left away from the Nobz. On his turn he is able to make the charge unfortunately to the Battle Leaders I have left who are with Harld Deathwolf. He makes quick work of them with all those claw attacks. But Unfortunately he fails three re-rolls with the lucky stick and gives me Warlord. My Powerfist attacks are able to kill all but one of the Nobz and the Painboy. The next few turns my Fireraptor ends up killing the last of the Nob unit and I am able to pick up linebreaker. Great game and a tough army to face with the Thunderdome. Space Wolf Victory 10-3 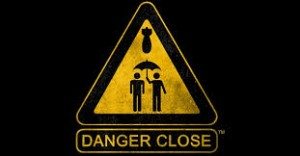 I ended up winning the event with the most battle points. Not taking overall since my army’s not the best painted, yet, still only 3 colors. I’m happy I was able to bring home a big W, especially after my army’s poor showing in Oregon. I really enjoy going to RTT’s and cannot wait to go to another one soon. The Thunderwolves will be on the table more this season as I truly believe it can do well against the meta right now. We shall see and I will get you guys some more battle reports.

10 Responses to “Welcome to the Thunderdome: Game Empire Tournament Report!”