Well, the votes have been cast, and the results are in! As always, it is surprising to see the results. We also had a record breaking response this time, 1,531 votes!

Question 1: How many detachments do you want to use in the ITC?

We brought this up again because the way I wrote the question last time, it was a bit ambiguous on the results. Sorry for that, but it was awesome to get a chance to correct course and get a clear cut answer. 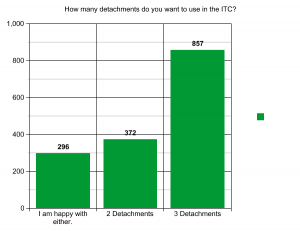 Well, there you have it. 3 Detachments is the clear winner. I am happy to see this, personally, as I think 3 Detachments in the age of “Combi” or “Decurion” style detachments helps to level the playing field and provides for more creativity in list building. When 7th first rolled around, we didn’t have the diversity we do now available to all the factions though data slates, formations, etc. and it felt unfair. Now though, I feel this is a positive move for the ITC and look forward to writing some really creative lists!

Question 2: Which of the follow D Weapon damage charts would you like to use for RANGED D weapons in the ITC?

The last ITC poll voted Ranged D weapons out of the circuit mostly because of the dreaded 6 result. Time after time we see that gamers just do not like picking up their models with no interaction. While in a casual setting over beers, I could see it being fun and funny, but in the context of tournament play where you pay to go to an event, having the game decided on the lucky roll of a 6 makes the game too much Chutes and Ladders and less Chess for many gamers. However, with the introduction of D weapons into the Eldar codex, we had to react or have Eldar players unable to use a big chunk of their book, which is no fun. We offered up the options of a modified D table to keep it powerful but toned down, or to just let it ride with the full powered D. 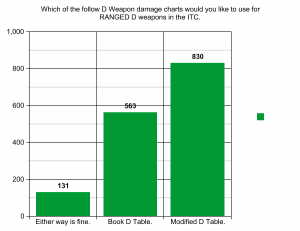 Whew, I was relieved to see this pass. Having played a dozen games with the new Eldar, and having played vs. a lot of full strength D weapons previously, I can agree that playing with it per the BRB is not very fun. When you lose a critical unit on turn 1 due to a lucky 6, it really takes the wind out of your sails. And while yes, that can happen with normal weapons, too, the fact that you do not get to take any type of save really sucks the fun out of it. However, I must say, I was surprised at how many folks voted for the unmodified D table. I thought this one would be a blow out, actually. I would guess that that represents a number of players that have not really been exposed to it before. Or, they simply preferred that to the only alternative presented and would have liked to see some other type of modified D table. Just speculation there, of course, but either way I am happy to see this pass. The result is that D weapons are still very powerful and still useful for stopping mega-durable “Deathstar” style units, but not likely to end a game for someone on turn 1, or to make high value, single model units a liability.

Note: we have already updated the ITC list of allowed LoW and some folks will immediately wonder why a certain D equipped LoW is not yet on the list. We will slowly be adding more units as we have a chance to try them out. There are other factors to consider with many LoW other than just if they have a D weapon or not. Thanks for your patience!

Question 3: Do you want to see Come the Apocalypse (CtA) allies in the ITC?

This is another question we wanted to revisit as we asked it in a way in the last poll that resulted in a slightly ambiguous result. So, we presented it in clear terms, this time to get a clear answer. Do you want CtA allies in the ITC or not? 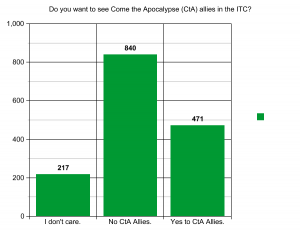 Same result as before. Most gamers in the ITC simply do not like the fluff breaking nature of CtA allies. I happen to agree, personally, although I voted yes to them under the condition of the next question, which we will get to. While this is a game, the fluff of the game is the coolest part of it, IMO. The aesthetics of the game and the story of the game are really important to creating a sense of immersion in it. Most ITC participants would prefer to not violate that fluff, it would appear.

Note: Does this mean your CtA army will never be allowed in an ITC style tournament? No, local events can break this rule if their community wants to, and at our bigger tournaments we also offer unrestricted events (namely our Friendly events) to those that enjoy this style of play. We won’t be seeing them in Championships format events, though, for the time being.

Question 4: If CtA allies are allowed in the ITC, how would you like them to be implemented?

While this is a moot question due to the result of the previous one, it is still interesting to see the results. We asked if CtA allies were to be accepted, how would ITC participants want to see them implemented? 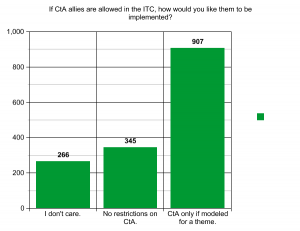 A fairly dramatic response. Overwhelmingly, players want to see an effort made to maintain aesthetics. This is a hobby in addition to a game, and I agree wholeheartedly with this sentiment. If we are going to have fluff breaking combos, at least take the time to model and paint them to match. That is being thoughtful to your opponent in addition to providing a fun modeling project, too, and is reflected in the votes. Again, if you have a CtA allies army you have your heart set on playing, many larger ITC tournaments offer unrestricted format events, such as the 40K Friendly at the LVO so that you can put your creations on the table!

Question 5: Eldar Windrider Jetbikes currently are able to take a heavy weapon on each model in the unit. Do you think that unit should be changed to restrict the number of heavy weapons to 1 in 3?

This was certainly the most contentious question on the poll, this go around. And, the results were surprising to say the least! 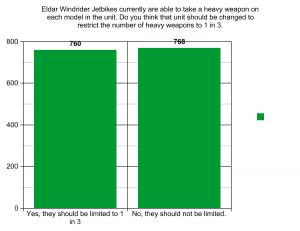 Holy crap, that was close! We’ve never had a margin of victory this narrow, before. 760 said change it, 768 said leave it. 0.005% more ITC participants that voted on this issue wanted it to ride than didn’t. Wow.

So, this is telling of quite a few things. First of all, I will say from a personal perspective that I am disappointed that this came to be as I genuinely believe that while Jetbikes won’t break 40k or anything hyperbolic like that, they will be the next Wave Serpents of 40k. Now granted, while I think the 6th ed Wave Serpents were arguably more impactful, Jetbikes with Scatter Lasers will be extremely prevalent and are too points efficient. They are not unbeatable by any stretch of the imagination, though.

My guess is that a lot of the votes to leave Jetbikes as written came from folks who simply have not played against them, yet (or maybe feel that they aren’t so bad!). Or from those that have not played against them with all of the tricks that are yet to come as players get used to them. As with the first time we proposed a change to Invisibility and it got voted down, but later was massively voted in, it is probably due to a lack of exposure. However, the vote is what it is, so get a strategy to counter the Scat Packs, as they will be prevalent.

On the up side, this proves a number of important points. For one: those folks that are opposed to the ITC polls on the grounds that players only vote in their own self-interest should take note. Clearly, that is not the case. Gamers do not always vote simply to benefit themselves or hurt their opponents. As not everyone players Eldar, not even close to half of ITC members, we can see here that not everyone voted for their own interests. Players voted with their conscience.

Secondly, Frontline Gaming does not have the ability to sway everyone’s votes as has–humorously–been stated in the past. We present what we believe to be the correct path based on our beliefs and experiences which may sway some gamers, but players vote with their conscience as can be seen.

Question 6: Would you like to see the following change made to the stomp chart: you can always make a “Look Out, Sir!” roll in response to stomp attacks.

This has been a hot topic issue, lately and is yet another incarnation of the desire of many gamers to not simply pick models up off of the table in response to an overwhelmingly powerful attack. We’ve seen it expressed with D weapons numerous times, and we see it again with Stomps, which are potentially even more devastating. 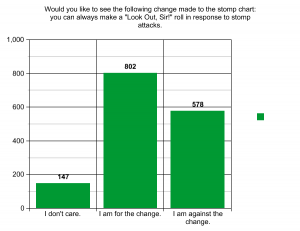 As we’ve seen time and again, folks lean towards the more conservative side of these issues. When in melee with a model capable of Stomp Attacks, you will be able to take a LoS! roll if the models under the stomp template are able to do so, giving you some chance of surviving. This to me is a big positive as many armies can only really deal with things like Wraithknights and Imperial Knights in melee, with Power Fist or Klaw style weapons and now have at least a hope of not losing them in the process of doing what they need to do. This levels the playing field a bit.

So there you have it! The people have spoken. We look forward to another fun season of the ITC!

← Skitarii Tournament Report from the Storm of Silence
Signals from the Frontline: Warhammer 40K and General Gaming News, Rumors, Tactics and Comedy! (Link to Live Show in Notes!) →