TinBane here, talking about what all this 30k nonsense is, and why/how you can join it four books into the series.

30K/Horus Heresy is a modified rules and list set (using the base 7th ed 40K rules now), set 10,000 years before the current time period. If you are interested in doing your own research, some of the best resources are podcasts. I recommend the “Eye of Horus”, “The Imperial Truth”, “The Independent Characters” and “The Overlords”, probably in that order

The 40k 7th ed system of Combined Arms Detachments (CADs), is replaced by the “Age of Darkness” detachment, which has built in a slot for allies and a Lord of War (LOW). Each legion of space marines has access to a list of standard units. The first thing you should know about legion lists, is that they don’t have a little rule called “And They Shall Know No Fear” (ATSKNF), that’s right motherfuckers, training wheels have come off!

These differ greatly from 40k, for example Tactical squads are 10 – 20 marines, and can only be fielded with bolters, however they do have a rule called “Fury of the Legion” which allows them (in some circumstances) to fire twice at the expense of next rounds shooting. The conditions on Fury are such that it’s of great use defensively, which makes large tactical squad locking down an objective actually quite a fearsome prospect to shift. Of course, if you can get a strong melee unit into a 20 man tactical squad, you can break them and run them down (see ATSKNF comments above).

Doesn’t Marine on Marine get boring?

With the launch of quite a large Mechanicum range, and the new Solar Auxilia, 30k isn’t just about power armour any more. But even if it were, it still not boring. The Night Lords, for instance, get the Legiones Astartes (Night Lords) rule. In addition to the basic “always regroup on your base leadership” astartes rule, the Night Lords get a bunch of legion specific bonuses:

Night Lords also gain an alternative power weapon option (The nostraman chainglaive), the ability to deep strike terminators and the ability to adorn themselves with other people’s faces (not alpha legion style, just to freak people out). 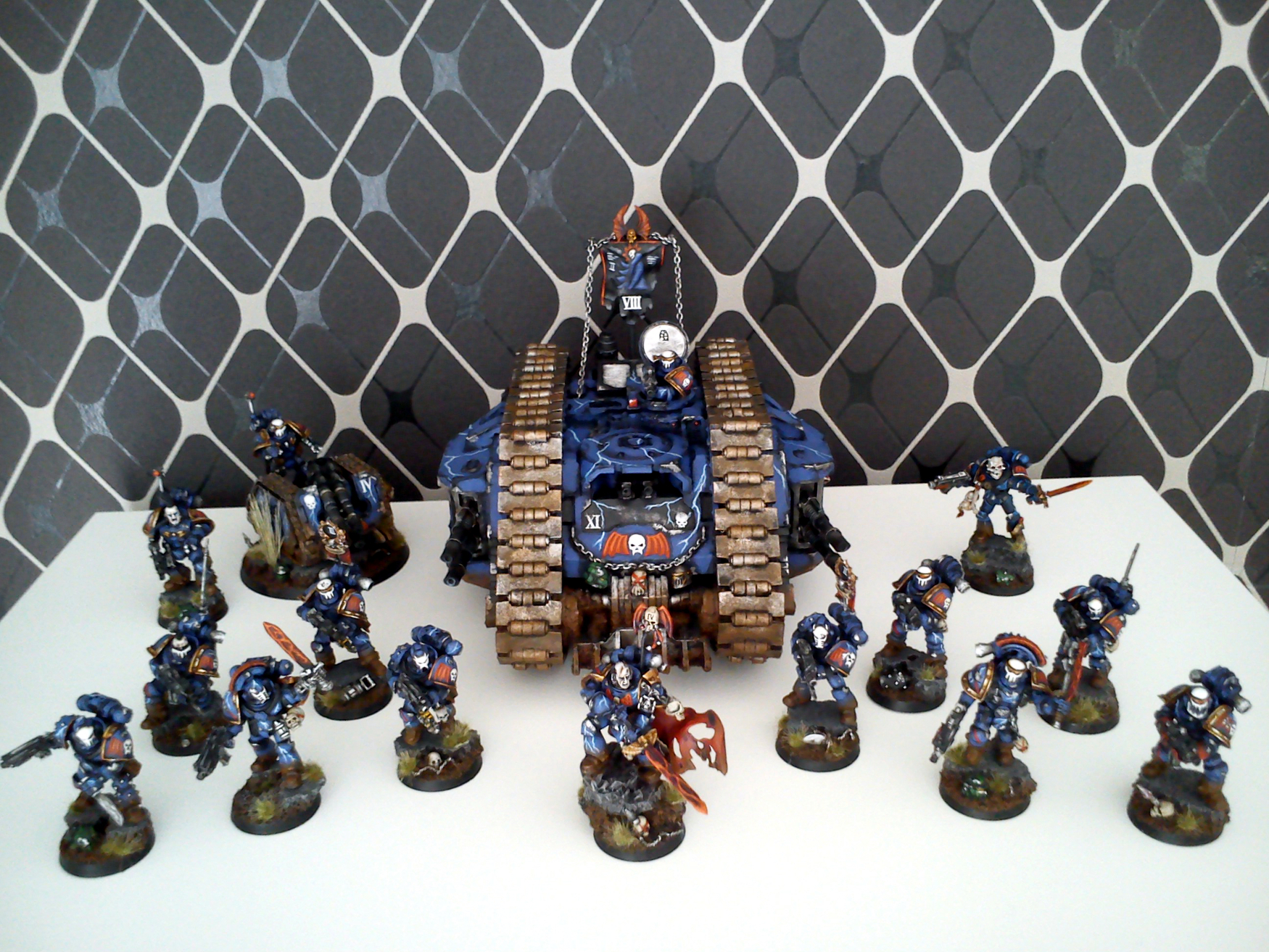 Unfortunately, not my Night Lords

Now we get to the special gravy of 30k, the Rites of War. Created before the existence of formations, Rites of War represent changes to your list to fight using a specific method or ideology. Whether it’s the spearhead assault of the Lunar Wolves, the implacable stone fist of the Imperial Fists, or the “Errrrrrrg, KILL!” of the World Eaters (Ok, I made that one up) each legion represented so far has at least one Rite of War. There’s also a generic list of rites which includes “Pride of the Legion” and “Orbital Assault”.

The Night Lords’ Rite, “Terror Assault” is a good example of how thematic these are. On the plus side, it gives you Night Fighting on a 2+ on turn one, a 4+ to continue it on turn 2, and a 6+ to continue it on turn 3 (Night fighting might even kick in again in turn 5, depending on the mission). You must take the Night Lords elite “Terror Squads” as your compulsory troops choice, and they can be taken as a regular troops choice, and nearly your entire list can be put in drop pods or dreadclaws. The downsides are that you must take an extra compulsory troop choice, you can’t ally with another Legion, your HQ choices gain some limitations, and you only get one Heavy Support choice.

So you can see, in 30k there’s quite a lot of effort to support your ability to play a thematic list, and still have it effective on the table top. In general, it’s combined with a mind-set that taking completely bonkers lists is kind of missing the point. It’s all mega-expensive resin though, right?

Well, yes it is. The forge-world kits for 30k marines, don’t come with any extras you’ll normally get in a tactical box. It’s just a set of marines with empty arms, but many players get into 30k by using 40k models. With a bit of converting, you can use current or even out of date 40k kit to represent your force (I have in fact, seen a force made up entirely of space crusade marines). In some ways, the older miniatures can even fit better. 30k uses a slightly less exaggerated scale to 40k, while the miniatures are the same size, you’ll find that for instance the ludicrous sized Dark Angels swords stick out like dog’s balls.

If you are interested in 30k, check it out at the next Con you are at. The players are generally very friendly and happy to explain things. Alternatively annoy your friend who plays it, pirate the rules and play a proxy game in your garage, or join the online community to see if there’s people in your area already playing. In general, if you have a painted 40k army that you can make a list using, then the vast majority of players won’t bat an eyelid in playing an introduction match with you.

Is there anything I shouldn’t do?

If you love unit spam. If you thrive on the salty tears of crushing other player’s hobby dreams. If you frequently fiddle with your opponent’s miniatures and break them. If you love tying the ruleset into tight knots to support whatever devious play you are about to unleash. Then 30k probably isn’t the game for you. That said, if most of your gaming experience has been in the cut-throat world of super competitive 40k, if you approach it with the right mindset, you might find that you enjoy it!

30K is rapidly growing in popularity, there are a lot of players out there (including anyone interested in chaos legions) who aren’t getting what they need from 40k (like the ability to represent the force they want). It’s really taken off in the UK and Australia (where the models were about the same price, with extras, as the base 40K kits. $65 tacticals box, yo), but it sounds like it’s starting to gain traction in the US.

← Pre-Order Special on Assassinorium Execution Force is a GO! Save up to 25% off on your entire order!
Signals from the Frontline: Warhammer 40k and General Gaming News, Rumors, Tactics and Comedy! →
0 0 votes
Article Rating
Subscribe
Login
7 Comments
Oldest
Newest Most Voted
Inline Feedbacks
View all comments

YES! The love for 30k needs to keep growing! Great article bro, I am working on my 30k Ad Mech and Knight forces and I love it! The Primarch models are simply the best that Forgeworld has ever put out. I picked up a Horus model at Adepticon and love it!

Thanks guys! I’m hoping to lure Reece into 30K so he can actually field Night Lords 😉 without being a chump.

Great Article. I’m in the middle of creating my own 30k Ultramarines Army. I’ve got almost 2 tactical squads (of 10) and 2 heavy support squads (missle launchers and rotor cannons) made just from Space Crusade marines.

One of the other tactical squads (along with my bike squad) is all Rogue Trader beakies. The detail is obviously much lower than a resin squad, but the vintage look is fun.

30k can be done in a cool and cheap way.

That’s so awesome!
I love the old rogue trader and space crusade models. I have a bunch mixed into my 40k force.

I love how sneaky the Rogue Trader beakies look, and how brooding the space crusade sculpts are. (I do hate the legs as the sculpt is kinda screwed up on the plates over the leg, hard to line properly as you have to create your own line in some spots)

Old School Rhinos and Razorbacks are quite plentiful as well. I’ve got 6 Rhino Chassis (with a few whirlwhind and razorback turrets) and a few predators, all for far less than the cost of a new gamesworkshop kit, and for a fraction of the cost of the new forgeworld ones. I paid on average about $25 for each one.

At first I would tireless strip each one, taking maybe a week a chassis, but got bored one day and just threw a fully painted one under my airbrush hood, 30 minutes later, I had a decent looking Ultramarines tank.

I’m kind of out in the boonies here, but if any of the reasonably nearby places start doing 30K events, I might have to dig out all my old RT-01 Beakies and put together an Alpha Legion force.