You are here: Home › News › What is Maelstrom’s Edge? 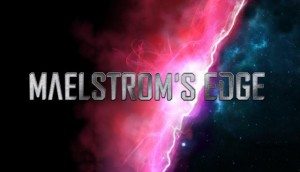 Maelstrom’s Edge is a next generation, squad based tabletop wargame set in a gritty science fiction universe of desperate survival. Players will be thrust into a fast, tactical game full of action and consequence, where every moment counts, and where there is always a way to change the game. No game is complete without a compelling setting, and we’ve worked hard to create a detailed and original universe for our players to explore, with deep science fiction worldbuilding and exciting, professionally written fiction. 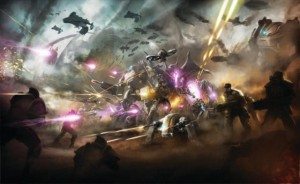 The game will be launching on Kickstarter at the end of April, so be sure to sign up or follow us on facebook to be notified of when you can get your copy ordered.

If you want to jump in to the Maelstrom’s Edge universe right away, you can buy our first two novels on amazon right now.

Our team of game designers, writers and artists have been working hard for the past three and a half years to develop a universe, range of models and ruleset of the highest quality, and we are extremely close to accomplishing our goal.

The Maelstrom, a gigantic apocalyptic explosion of dark energy, is rapidly expanding out from the heart of the galaxy, destroying everything it touches. The Epirian Foundation has spent years terraforming the planet of Zycanthus with its robots, but with the Maelstrom approaching, the mysterious religious group the Karist Enclave have decided the world is ripe for conversion to their cause…

In the Battle for Zycanthus boxed set, we’ll provide everything you need to play the Maelstrom’s Edge tabletop game, in which physical plastic models are moved around a table to simulate a battle. As well as the rules, dice, templates and tokens required for playing our innovative new ruleset, backers will receive two armies in detailed, multipart HIPS plastic for the Karist Enclave and Epirian Foundation factions. The models are provided as plastic sprues and you get to assemble and paint them, customising your forces to your own preferences and battle plans.

Our models are some of the most detailed ever to be made. We are exclusively working in the best possible material – injection moulded High Impact Polystyrene (HIPS) plastic, at 28-32mm (~1:56) scale. Every model is made in multiple parts with multiple variable poses, additional weapons and choices to allow you to pose and customize your forces exactly as you like.

The ruleset for the Maelstrom’s Edge tabletop game has been written from scratch by one of the world’s leading authorities on tabletop wargaming: Jon Regul (yakface) of Dakka Dakka. For over a decade Jon has fixed other people’s rulesets for tournaments, and all this time has been developing a ruleset of his own. This ruleset now exists in the form of Maelstrom’s Edge, and is everything we as gamers felt was missing from what’s out there today. 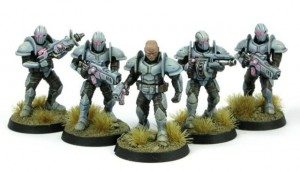 7 Responses to “What is Maelstrom’s Edge?”