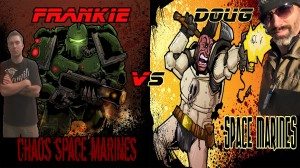 In this game Frankie will be facing off against Doug  so tune in to twitch: FrontlineGaming_TV on Thursday the 16th.

We had no internet last night, sorry about that! Working on a solution to avoid that happening, again.

I’m a bit confused on the rationales on some of the list’s choices.

Why only ten Horrors? Adding one more gets you an extra Warp Charge every turn (until it dies, anyways, but hopefully the enemy has other things to focus on early game), which seems well worth it for 9pts.

Why only an Exalted Reward on the Herald? I’m assuming that most games it will go for the Grimoire to buff units, but you’d really benefit from having a Lesser Reward so you can pick up a nice melee weapon on the cheap. A Locus to buff the doggies would also be useful.

No Mastery Level upgrades or Familiar on the Sorcerer? The latter, at the very least, seems like a much better buy than the Combi-Melta and could easily be fit in. I would assume you are rolling on Telepathy with hopes of getting Invis/Shrouding to help keep one of the melee units alive, but with ML1 that’s a pretty long shot…

The Heldrake stands out as a bit of a strange fit in this list. Everything else is strongly aggressive and forces the enemy to deal with it early on, but the Heldrake won’t come in until later and serves a very different role. I kinda feel that dropping it for a third Maulerfiend (or for more Khorn Dogs and a Herald) would be a superior option.

exalted is so he can grim the brass scorpion

That is an auto perils. Risky.

Why is is an auto-perils? The Grimoire isn’t a psychic power.

Will the live stream be added to the “Past broadcasts” on the twitch page? Alot of people are unable to see the live feed but like to watch the next day.
-Thanks

I think they’re working to edit them and put them up on youtube – also usually twitch does post them I think.

.. from what i understand there were net issues last night so the game wasn’t streamed (this is hearsay as its what i heard, and i have no factual evidence to support this)

We had an internet black out, last night, sorry guys!

It isn’t as creepy as it sounds i promise..

We figured it was something like that – sorry about the blackout!

Yeah, that was so frustrating.