I Can Necron, and So Can You!

Rawdogger here to talk to you all about a Necron army idea I’ve kicking around in my head. You think you know how to Necron? I’ll teach YOU HOW TO NECRON, BRUH!! Ahem, sorry to get so excited. You would think I’m living in San Diego with Reece and Frankie wearing a Famous hat with a flat brim and a Tap Out shirt.  Since the release of the new Necron codex a couple months ago it’s been hard to ignore the internet buzz regarding the power of the codex. Almost every forum thread or blog comment section talking about the power of either codex A or codex B is flooded with arguments along the lines of ‘oh you think that’s powerful, what about the Necron codex’, etc. As someone who is not very good at the tactics of the game any news that there is a codex that jabronies like me can pick up and rock faces with is sure to grab my interest, so I recently picked up the codex and gave it a nose. 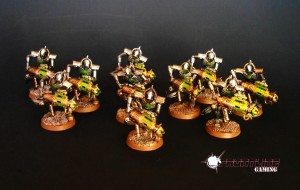 My initial thoughts of the codex are that it is incredibly powerful and resiliant. In the right hands an optimized Necron list can decimate the opponent while taking little damage in return. I would say that the Decurion detachment is the way to go if you intend to take a competitive list. The ability to have all Reanimation Protocol rolls on a 4+ as well as unlocking the formations with additional abilities is almost too good to pass up. A couple stand out units that I zeroed in on were Nemesor Zahndrekhand Wraiths though there are almost no units in the codex that I would classify as useless. So with these units in mind and the power of the Decurion Detachment in my heart, I set out a tournament winning Necron army list. The list combines the old power of the flying croissant list with the new power of the Decurion Detachment and formations all while keeping my love for Immortals. 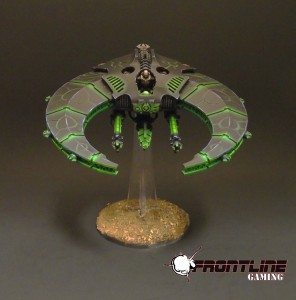 So the basic premise of this 1850 list is Anrakyr and the Royal Court join the Immortals either on the board if I am confident they won’t get slammed turn 1 by my opponent. The unit itself is fairly resilient, with a 3+ armor save and a 4+ reanimation protocol roll. They also receive a 5+ invulnerable save from the Cryptek’s Chronometron. In combat they put out 8 WS5 and 3 WS 4 Warscythe attacks on the charge from the Overlord, Anrakyr, and the Lord. Not to even mention the attacks from the Immortals and Cryptek. The unit also has Counter Attack thanks to Anrakyr. I like the Veil of Darkness’s ability to either get you out of a jam or get you where you need to be to get that crucial firing solution to pull off a victory. With Tesla Carbines I should be able to get a good amount of shots from the unit, not to mention the Staff of Light from the Cryptek or Anrakyr’s Tachyon Arrow. I really thought about Lycheguard, but I’m just not a fan of close combat units in 7th edition 40k. Yes they are nigh unkillable but a good opponent will just stay away from them or toss them disposable units to munch on. 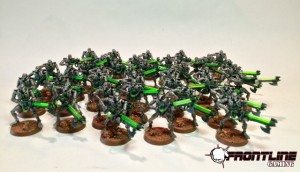 The Necron Warriors do what they do and come on to the board with their Night Scythes, hopefully teleporting and wrecking a face or two while doing so. The Night Scythes themselves are still phenominal at taking out fliers and infantry alike with their twin linked Tesla Destructors. I like what the Tomb Blades do for their cost, and with S6 cover ignoring blasts they can torment the opponent’s weak backfield units hiding in cover. The Canoptek Harvest really packs a punch. With the ability to give the models in the formation within 12″ of the Spyder (the Scarabs) Reanimation Protocols, Shred, or Fleet, the Harvest is really a standout choice in the codex. Scarabs still wreck a lot of units while Wraiths are just incredible now with a 3+ invulnerable save and T5. In assault the unit pumps out 24 S6 rending attacks at I5. Not too shabby, flabby!

← Daily Awesome Conversion
Eldar, the ITC and the Dirty D: Keep Calm and Carry on →