So a couple of weekends ago, I got the chance to attend a local event held by Ordo Fantaticus, one of the largest gaming clubs in the NW, who put on a huge team tournament for Warhammer and 40k each year. This was a small, three round event that was the culmination of their escalation league, but since they had extra spots open, they allowed pour souls like me to attend and go for the prize.

Mr. Mediocre Gamer himself was running the tournament and wanted to try out some modified elements of Maelstrom that he had heard about from the European regions. Since I Merica, I was skeptical at first, but was glad about the changes as follows.

Instead of the Maelstrom points going to the overall score, they were tallied up each round. You scored them like normal at the end of each player turn and the person with the most Maelstrom points won the round. The person with the most rounds won or the first to get to four rounds won was declared the winner. The winner of the Maelstrom won 5 points, then the book bonus points were added in for First Blood, Slay the Warlord, and Linebreaker. There was also another element where each game a player had two points that they could spend during the game to immediately discard a Maelstrom objective or to reroll one die. If you did this, your opponent got a point towards the final tally.

The card points were also modified in that a D3 was an automatic 2 and if you couldn’t score a Maelstrom objective you could discard it.

In all I really liked these changes as I have had one too many Maelstrom games where there was a blowout turn like in one game against Dr. Insanatron where he scored 9 points in the first turn making it pretty much game over right there. I hate games like that where you know there is literally no chance to win. 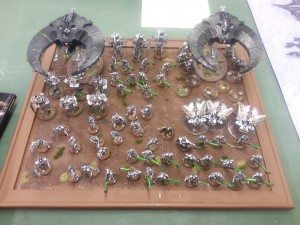 As mentioned before Ordo hosts a team game where they will be doing Maelstrom missions and although they can frustrate me as seen before, my friends want another crack at it so we are going in hot with Maelstrom in mind. I’m planning on doing my Necrons as they have been a blast with the new book. I’ve been in love with the Decurion Detachment but wanted to try a CAD to see if Obsec was going to be greater than the improved Reanimation Protocols. It was also a Highlander event so I had to follow the Highlander rules of there can be only one! Except for troops. J

The list wasn’t meant to be the hardest one ever, it was more about trying some new units (my shiny new Flayed Ones) and just trying to make a Highlander list work with what I have. 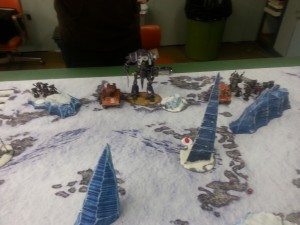 Game one had me against a mixture of close combat Death Company and the Archeron with some mixed fire support. I rushed the Scarabs and Wraiths forward towards the Knight and the Flayed Ones toward a unit of Death Company. My left flank was strong, but my right flank was exposed to the larger Death Company and Cullexus bearing down on my objectives and warriors. His Death Company tore up my Flayed Ones but my Scarabs and Wraiths took down the Archeron and Baal Predator. We essentially rotated around each other but my shooting and assault was able to outpace his. I took the win.

Game two as against none other than ITC CSM top player Joel Talley! We’ve known each other for a bit and I know Joel to be a solid player. He came in with a hard hitting mixed Daemon/CSM list with the Brass Scorpion as center stage. I knew I had to get rid of that beast if I was going to have any chance to take the game.

I made some big mistakes in holding my Scarabs back to soon, allowing his Plague Drone to do some work on them. By the time I got into the Scorpion, my assault was way too weak to take it down. I did a fair amount of hull points, but not enough. This allowed it to rampage into my backfield and get into my big block of warriors. I was able to Veil out and put more hull points into it, but still couldn’t take it down. 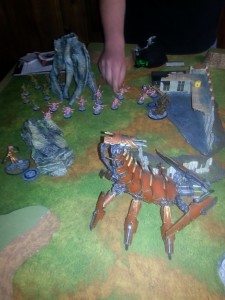 Then came the final turns. The Scorpion went after my Tomb Blades for the win and charged at them. They overwatched, rolled one 6, followed that up with one more 6, and he failed his 3+ Grimoired invul save peeling off that final hull point! This allowed me to take the turn and go on to win the game.

Game 3 was the final round and decided 1st place. I went up against Burk’s Space Marine and Knight list in an Ad Mech style. He was running Ad Mech before it was cool man! It was a mixed force with some Tacs, Chapter Master, Dread in a Drop Pod, Scouts, Vindicator, Whirlwind and an Errant Knight with a stand in model from the classic Macross saga that I fully approved of.

It was also where my luck ran out. First turn my tomb blades jumped onto an objective, lost one to dangerous terrain and failed their moral and ran off the table for First Blood! He didn’t even have to do anything. It was pretty hilarious. I put a lot of pressure on him and made some great movement, but just couldn’t get the cards in my favor. It was still a great game and I tried a few times to turn things around but it wasn’t meant to be.

With my round three loss I ended up coming in second and secured a nice gift cert. It was also a potluck and there was a ton of food. I brought Japanese Curry and we feasted, diced, and had a good time. 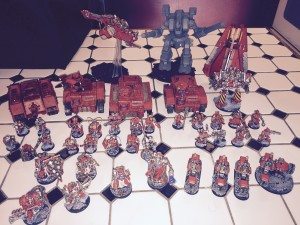 I’m leaning more and more to the Decurion detachment for my Crons. I for one felt I was missing on so much even with Obsec, which only came into play a time or two. I know I could have used Move through Cover for my Tomb Blades on that last game for sure! Coupled with Relentless and the army wide +1 Reanimation Protocols I feel that the trade off is worth it.

Thoughts on This Modified Maelstrom

Overall I liked this system a lot more than the regular Maelstrom system. The crazy random nature of how Maelstrom works and how huge points can be quickly scored and take the game away has been a big turnoff for me. I would say that more of my games have had this happen more often than not. Even in this system Game 3 had this happen where my opponent got the cards he needed and I didn’t. In the end I had a good day of gaming, eating, and hanging out.

Some thoughts have been percolating about why a lot of local leagues and events have been doing more Maelstrom events and why tournament players typically don’t it and more casual players do, but that is for another article. I love the concept of Maelstrom, scoring throughout the game, but have yet to see it done to a satisfying manner. I feel this idea of round Maelstrom scoring over totaling your Maelstrom points has some good merits and is worth a look at.

Leave a Reply to Castle