I am so excited for the new Skitarii! 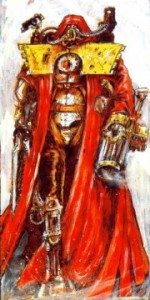 As a long time 40k geek, I am so excited to see GW exploring the rich depth of the game’s background. I remember the old John Blanche artwork, as shown above, and how cool and evocative it was of a truly grim dark version of technology in a future that I was both fascinated by and had no desire to actually exist in.

There’s tons to love about the Adeptus Mechanicus background, and there’s actually a ton of it! Forge World has been doing an awesome job with their predictably gorgeous line of products. 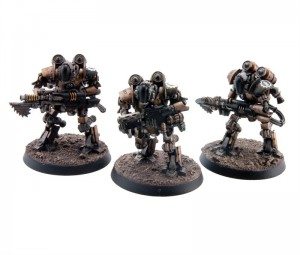 But GW diving into the Skitarii will really bring it to the masses, so to speak. The gorgeous plastic kits they’re releasing just look fantastic! They did such a good job of capturing the feel of the Skitarii (or Tech-Guard as they are sometimes called), and I am very excited to get my hands on some of them! I’d be a bad business person if I didn’t take this opportunity to mention that we are having a 25% off sale on Skitarii right now over at Frontline Gaming. Click here for more details!

Plugging our store aside, I can’t wait to see what all we get with this release! So far, the Rangers and Vanguard look very cool! I love the concept of a unit (Vanguard) that is so irradiated that not only are they dangerous to anyone who stands near them, but they will eventually destroy themselves! Brutal. But, if rumors can be trusted, lowering enemy toughness by 1 in melee make this an incredible support unit. It seems that they will be a good ranged unit, too. Speaking of shooting, the Rangers look to also be a really solid addition to any list. Their weapons look to be excellent.

I am most excited about the Sicarian Infiltrators and Ruststalkers. They look just too cool! Rumors for their rules sound pretty interesting, but I certainly want to try them out before passing judgement. However, wonky looking robo-ninjas is something I cannot pass up on an aesthetics basis, alone! All of the crazy kit they are rumored to have sound awesome too, like grenades that are haywire AND poison? Sweeeeet! That is just the kind of uber tech kit I would want in a Skitarii unit.

The new walkers are beautiful models but I am a bit on the fence as to the rules, just yet. Again, way too early to tell anything without a play-test, but the shooting version, the Ballistarius, looks very cool with a rumored BS2 Snap Shot on largely Twin Linked weapons. That makes them actually very solid AA units in addition to bringing mobile firepower to a TAC list. The Dragoon looks brilliant and is rumored to be quite quick, adding 3″ to it’s various movements, but I am left a bit baffled if it has no AP on it’s weapons? We’re also hearing rumors and seeing leaked pics of a rumored heavier walker tank, with tons of cool sounding options that I am digging! Too early to tell, I can’t wait to get my greedy paws on that book! 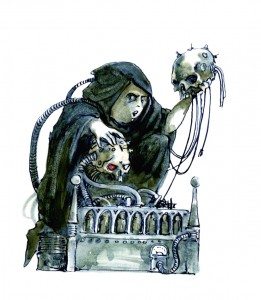 What seems to be curiously missing though, is HQ. Skitarii definitely have HQs in the lore, the Masters of the Skitarii, in addition to the Magos they belong to. I can only speculate why we aren’t seeing those? Maybe in releases yet to come? Also, will we get Ordinatus LoW? That would be awesome! How about the Praetorians (Skitarii special forces) or Sagitarii (Skitarii heavy weapons specialists)? Electro Priests!!!

Time will tell, but for now, i am just really excited about this release. I think Skitarii will make a versatile, colorful, and fun addition to many armies. I particularly see them meshing well with Imperial Knights, where they will fill many of the gaps in a 3 Knight list.

What all are you most excited about for Skitarii and what would you hope to see if the line is expanded?

I heard the rumor was the Skitarri are like the scions and there’s going to be a big AdMech codex, but you’d be more in the know than me 🙂

I hope to see them sometime! I’m way exited about the Ad Mech – going to use them as allies for my Iron Hands project.

I have heard that, too, but, only time will tell. It would be awesome to have a fully fleshed out AdMech army, but I would guess that with FW already doing it, that that may not occur unless GW puts those units in the Codex. However, they did the opposite with IG and took them out of the Codex so who knows?

“It’s ok buddy, it’s not like they are the same points cost as you….”

Reece the grenades aren’t poisoned, just wound on 4+ so they work agaisnt GMCs a subtle but important difference

Ah, thanks for the clarification.

I am uber stoked for them, yes.

Sadly, I dont really have the money right now to invest into them. And if I were to start Admech Army, I’d probably go Legio Cybernetica from FW and get the big beasties on offer there like the Castellax and Thanatar before investing into Skitarii.

That said, they are REALLY cool. If there is a larger Admech GW release, they’d probably be shooting themselves in the foot a bit if they excluded FW Admech.

Then again, FW is prohibitively expensive when compared to Plastics…they’d have to work on that.

Yeah, that would be bad ass.

The mechanicus will find themselves quite welcome in my templar’s damocles crusade. The technoheritics need to be shown the empires obvious superiority!

I could not agree more. These guys are tailor made to support a three knight primary detachment.

Yeah, I agree completely. They’ll be good with Sisters, too.

I bought 6 boxes of skitarii, 3 boxes of ironstriders, 3 boxes of sicarians.. I uh.. I am going in deep on them 🙂 Also using my Acheron/Castigator/Knight with them!

Fucking boss mode! Can’t wait to see the army. We’re getting a detachment of them for the studio here, too.

Hot Damn! You’re going deeper than deep on this!

Cant wait to see the army in some BatReps!

I shelled out for the limited edition codex. I’ve been waiting almost 20 years for an actual AdMech Codex, and now that it’s here, I’m totally getting the shiniest version 😀

Unfortunately, that meant I could only afford a couple boxes of the Infantry afterward, so it’ll be a while before they see the table as more than a tiny side force to my Guard, but eventually I’m going all in on these guys.

Also, according to the leaked pic of their Detachment, they’re like Harlequins and have no HQ of their own. I’m guessing Tech Priests and such will be covered in a full AdMech Dex if this does well.

i wanna see neo-space marines with buzz saw hands and gun arms, i want goddamn giant robots with lobster arms, and a choo choo train that shoots D hellstorm templates. the 30k ad mech is so good, srsly, just give me a bunch of that, castellax and myrmidons…