Rawdogger here to discuss the latest 40k codex release, Khorne Daemonkin. Why they didn’t just call it Codex Bloodthirster I’m not quite sure though that may be the reason I don’t work in marketing for Games Workshop. Seriously, the GW marketing department figured out a way to get players of this codex to purchase the new Bloodthirster kit in multiples due to the many ways their characters can turn into them during a game. Hats off, marketing department. From someone with a background in retail and marketing it truly makes me smile reading all of the forum and blog comments that gleefully state the amount of Bloodthirster models the person will need to purchase. 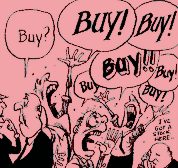 From an aesthetic point of view the 120 page codex is top notch. Though a lot of the artwork is recycled from the Chaos Space Marine and Daemon codices, there does appear to be a good deal of original artwork in the same vein as the new artwork in Codex Harlequins. It’s a bit too cartoony for me personally, but I know a lot of people like it. The codex continues the awful trend of putting the war gear list in front of the units which are then in front of the appendix and detailed war gear pages which makes turning back and forth an annoying experience but I suppose I should just get over it already.  Around 70 pages are fluff and artwork.

Enough on the wimpy aesthetics, let’s get to the good stuff! RULES FOR THE RULE GOD!

Point Costs and Stat Lines- Sorry boys and girls, the point costs for all units taken from Codex Chaos Space Marines and Codex Daemons are exactly the same. The stats are also unaltered, so those hoping Blood Crushers would be T5 in the new codex are SOL. Most depressing for me is that Berzerkers have not been changed at all. This also points to the fact that they will not be altered in any new Chaos Space Marine codices that may come out in the future. Why oh why do they not have base 2 attacks or initiative 5? The only rending attacks that they used to have were so scary! Oh well, quite the missed opportunity for GW but I understand they could not have the same unit in two different codices with different points or stat lines.

Blood Host Detachments – The forces of Khorne get their own Decurion style detachment a la the Blood Host Detachment. For those who have no idea what the hell I’m talking about, the Decurion detachment is a special Necron detachment that unlocks more formations with their own special rules when taken and currently count as a single source choice in the ITC tournament format. These detachments have a set amount of units comprised of kits that GW needs to sell and are mandatory if you want to take the cool formations it unlocks. In the Blood Host Detachment the players are forced to take a Slaughter Cult formation which includes a mandatory unit of Possessed. Got to sell the kit somehow! You know what I’m sayin’?  HUH DO YOU GET IT?  The benefit of taking the detachment as opposed to just taking the individual formations in the book is that the Slaughter Cult in the detachment gets to generate a Blood Tithe point automatically at the start of each turn.

New Formations! – Khorne Daemonkin comes with a slew of fancy new formations. They are as follows.

SLAUGHTER CULT – Not only is it the name of a kick ass high school metal band, it’s a formation that allows the player to remove cultist units that have failed a morale check in order to add to the Blood Tithe number as well as adding additional Blood Tithe points to all units in the formation whenever a player cashes in their current Blood Tithe points.

BRAZEN ONSLAUGHT – Comprised of 1-4 units of Chaos Terminators and 2-4 units of Blood Crushers. If any of the units in this formation are outnumbered in combat each model gets an additional attack. Not too bad if you plan to run an army of Blood Crushers. You do have to pay a tax of a unit of Chaos Terminators but you can just kit them out to be a suicide melta deep striking squad.

KHORNES BLOODSTORM – Comprised of 2-4 units of Raptors, 1-4 units of Warp Talons and 0-1 Heldrake. Units in this formation add +1 to the strength of their Hammer of Wrath or Vector Strikes. WOW THAT IS AMAZING.

GOREPACK – If I ever have a biker gang made up of other 30 year old white suburban men this will be the name of our gang. Comprised of 2-4 units of Chaos Bikers and 1-4 units of Flesh Hounds. Units in this unit have move through cover as well as preferred enemy Psychers. Flesh Hounds in the unit have Hammer of Wrath and the Chaos Bikers have shred on their Hammer of Wrath attacks. Honestly, I can see this formation getting a lot of play since Khorne Hounds are regularly bad ass. The bikers are still meh though the Move Though Cover definitely helps.

CHARNEL COHORT – Units comprised of Khorne Daemons. All units in the formation get Counter Attack. The HQ unit can re-roll the die to come in from deep strike reserve and any other unit in the formation coming in from deep strike reserve do not scatter if they come in within 6” of the HQ unit. Also, enemy units take Fear tests at -2 to their leadership. FINALLY fear can be the game changer GW clearly wants it to be.

Blood Tithe Table – Khorne Deamonkin has a unique army table called the Blood Tithe. Any time a unit from the codex either destroys an enemy unit or is destroyed themselves the Khorne player generates a Blood Tithe point. The points accumulate (cap of 8) and can be spent at the start of the Khorne player’s turn. The table is as follows.

1) All units from Daemonkin get Adamantium Will until the start of your next turn. Could be good if going against a lot of psychic powers I suppose.

2) All units from Daemonkin get Furious Charge and Rage until the start of your next turn. This would be an excellent one to use right before some crucial charges. RAARGHH

3) All units from Daemonkin have Feel No Pain until the start of your next turn. Always a useful trait to have.

4) +1A for all units from Daemonkin. Again, not to shabby right before a charge. Set that up with number 2 and baby, you’ve got a stew!

5) 8 Blood Letters or 5 Flesh Hounds are summoned within 12”any friendly unit from Daemonkin. Can you ever have enough Flesh Hounds?

8) A friendly character takes a leadership test. If passed they become a Blood Thirster of Unfettered Fury. If failed the character is removed as a casualty. Sorry, no characters with Daemon of Khorne special rules allowed.

Artifacts of Slaughter – Some cool unique artefacts are available to players of the Daemonkin codex. A quasi Daemon ax weapon that gives benefits for how many wounds it causes. A piece of armor that gives a 3+ armor save with Eternal Warrior. And of course, an ax that can turn a character into a Blood Thirster, because BLOOD THIRSTERS ROCK AND JUNK.

Blood Thirsters – The daemon of the hour! No one can deny the absolutely GORGEOUS model that GW has put out for the Blood Thirster. Sometimes we see things like the Logan Grimnar Santa Sled and we forget that GW can actually hit the ball out of the park now and then with their sculpts. Rules wise, the Blood Thirster is a real beast and properly reflects the brutality of the model. There are three versions of the Blood Thirster that players of Daemonkin can take. All three have the same respectable stat lines of WS10 BS10 S6 T6 W5 I9 A6 LD9 Sv 3+ and come with the Deep Strike, Fearless, Daemon of Khorne, Blood for the Blood God (Blood Tithe Tally), and Skulls for the Skull Throne(always challenge or accept challenges) special rules.. The Bloodthirster of Unfettered Fury is lowest costing of the three. He comes with an Ax of Khone which on the charge with Furious Charge gives it 7 S7 attacks which instant kill on a roll of 6 to wound. Not too shabby! Next up we have the Bloodthirster of Insensate Rage, which comes with the Great Ax of Khorne, a D weapon that strikes at I1 and has Rage. Certainly something that will remove units with ease. Lastly we have the Wrath of Khorne Bloodthirster with an Axe of Khorne, Blood Flail (AP 2 Specialist Weapon and d3 S7 AP2 Assault D3 weapon) and Hellfire (heavy flamer with Soul Blaze). This dude comes stock with Adamantium Will, and Hatred (Characters) and puts out 8 S7 attacks on the charge. YOUCH! Overall I like the Blood Thirsters but still feel they will be shot to pieces before getting to do anything. Hive Tyrants will still be hitting these guys with 10-12 strength 6 shots a turn with a likelihood of wounding twice per Tyrant. Not to mention Sky Firing Tau plasma weaponry, Twin Linked Grav Cannons, etc. If they get into combat they will straight up murder homies but the problem with assault in 7th remains an issue for them.

Overall, I really do like this codex. It’s not going to be able to hang with the big boys at the top tournament tables but has a good mix of fluffy and powerful special rules and combos. I’m disappointed that Berzerkers are still shit and that Kharne is not included in the codex. I really think it was a missed opportunity for GW to really beef them up and sell more kits.

So what are you thoughts on Codex Khorne Daemonkin? Wet Noodle or Powerful Cucumber?