You are here: Home › 40K › How often does First Blood determine game outcome?

TinBane the Aussie, discusses game points in the ITC format.

Frankie and Reece had an interesting discussion on the podcast recently. If the maelstrom and primary objectives are worth the same game points (rather than 3 and 4 respectively) does this make first blood less or more important? One perspective, is that first blood is less of the proportion of total points in the game, and therefore contributes less to the outcome. Another is the vague hand-wavy explanation that it’s odds of being the tie-breaker between two sides is raised.

Who is correct? My gut is that it’s the latter, evening out the two major contributors means that it will contribute more to the likelihood of victory. And that’s based on a very real, and very serious real world model: two party systems, worldwide. When you have a balanced, or close to balanced, traditionally “two party” system, the major parties have to negotiate with the independents to pass or deny legislation. If you have 251 or 25,000,001 members in the party, that one independent has the only vote that really matters. That’s right, politics and gaming in the same thread, in effect and analysis of the role of point “blocks” to outcomes in either case.

Okay, so the simplest way to find out the answer, is to model it. I’ll lay out here, my assumptions:

There are three objectives (primary, secondary, first blood) that can only be scored once each, and are always scored. Therefore we’ll assign the odds as 50/50 for each, and make them independent of each other (winning primary in our model, doesn’t effect the odds of winning secondary).

We have a set of other objectives (line breaker, warlord) which can be won by nobody, everybody, or one player. Now with these objectives, the best idea is to work out what’s the worst scenario for the opinion I’m trying to push, and use that scenario. It adds conservatism to the results. The worst case, is each player having a 50/50 chance of winning any of these. That will result in the most “chaotic” distribution of points, which will mask the effect of first blood. If the odds of getting linebreaker or warlord go up or down, then there’s more chance that both players will either get or not get it, nullifying the effect.

The modelling system runs a “game” and assigns each player each objective. It then measures for each objective scored, whether it contributed to the end result or not. For instance, if I win a game by two points, then warlord, line breaker and first blood can’t be an individual deciding factor in that outcome. Only the primary or secondary can be the deciding factor. If the result is only a win by one, then any of those I scored, contributed fully to my win. If I absolutely spank the other player, and win both primary and secondary, and everything else, then none of those factors were decisive in my victory, it was the combination of all of them. In the case of a draw, every point scored changes the result, and therefore every point is decisive.

Let’s review the results, because they are super-interesting! 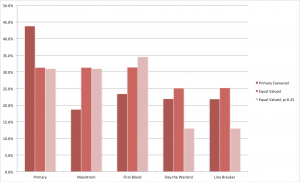 Now, I’ll just remind you, these don’t add up to 100%, because games can be decided by multiple factors, or by no factor at all. Maelstrom is low, because many of the games are going to be won by Primary + Tertiaries. If you are relying on the Maelstrom to win, it’s a hard route. If we are allocating points randomly, then it’s obviously not going to pan out a lot of the time. Players playing for a maelstrom win, often have a good idea of how they can achieve it. So it’s likely that maelstrom wins are more decisive in actual battle data… maybe. It’s also possible that players are worse at playing for a maelstrom + tertiary play, than randomly allocating the points would result in. It would be interesting to see if we could get this data from the LVO some how!

When we change to equalise the primary and secondary, we see something REALLY interesting happen. The Primary, Maelstrom, and First Blood are largely indistinguishable. 31.3 – 31.4 % of games are apparently won by primary or maelstrom, combined with first blood. This seems to suggest your odds drop from 50% to win or draw a match against your opponent, down to 34% when he takes first blood off you, in the new configuration. In the old one, it dropped from 50% to 38%. So balancing the primary and secondary, will actually enhance the impact of first blood as a deciding factor, in the best case scenario (remember, the 0.5 we used to calculate the odds of warlord/line breaker).

What happens if we implement the new change, and it’s not 50/50 on linebreaker/warlord. What if your odds are 25% for claiming each of these tertiary points? Well, then we get to the lightest graph. First blood accounts for 34.5% of wins/draws in this scenario. And your odds of winning or drawing with a guy who just took first blood, are less than 1/3 at 32.75%.

So there you have it. It looks like if we modify the ITC format, to match Maelstrom and Primary mission points values, we’ll increase rather than decrease the importance of First Blood.

← Daily Awesome Conversion
25% Off Pre-Order Special is a GO for Skitarii! →

22 Responses to “How often does First Blood determine game outcome?”

Leave a Reply to winterman