You are here: Home › 40K › Uncategorized › The Last Laugh

An article from Jeremy  aka the French Overlord outlining his latest unique army idea.

Bonsoir mes petits connards (Good afternoon my little asshats), this is MikhailLenin aka the French Overlord bringing to you the freshest of fresh in new ITC format awesome list combo.

Oh but before I share this new French discovery to the broader community, I want a PSA to come out mentioning that GTA from Team Zero Comp is not allowed to use this list without paying me royalties in the form of Whiskey, Coffee and sometimes both in the same drink. Though for everyone else, you can use it freely, modify it freely, and most of all laugh at your opponents with it but I beseech you all to refer it in its true glamour: “The Last Laugh”. 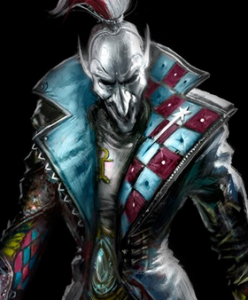 If no one here could figure out from the last paragraph that this list was going to be a Harlequin army, than you should probably not continue reading this long monologue of me promoting my ego. Yes, internet, I feed upon you like an Archon feeds upon the blood of human innocents in the 40k universe (Which is NEVER, since there are no innocents in 40k). ANYWAY, back on Topic, the concept of the list first started when I was considering my new ITC 2015 Army I wanted to corner and around the same time came out the Harlequin Codex which was perfect because I immediately dialed in onto a very specific relic in the book, The Mask of Secrets. For those who are uninitiated in the codex, it is a Shadowseer only upgrade that grants the Bearer and his unit Fearless but also a 12” bubble that affects all enemy units with a -2 Leadership modifier. Now the tough question was how to build a working combination list with this Item that could also function in the ITC 2 Source Detachment.

At first I considered using the Masque Detachment or Cegorach’s Revenge but the point investment make its tough considering that the army has little to no shooting from afar. The reason being that if I was going to build a list around the -2 Leadership modifier than I would need ways to maximize on this and also increase the potential of it so the first thing that came to mind was the Iyanden Shadow Council with Spiritseers because not only do they gain access to Telepathy but they also gain access to the Eldar Runes of Battles powers and both lore contain highly useful power which I go farther in detail with. The formation I ended up taking is the Cast of Players Formation allowing you to take 1 Deathjester, 1 Shadowseer and 1 Troupe which meant I could take the Mask of Secret, gain access to a Nasty Melee Unit and allow me to pick the Troupemaster as Warlord and unlock completely the new Warlord traits from the Harlequin codex which are phenomenal. The Formation ability is actually pretty useful since the unit is mostly on foot, it grants the unit and all Eldar/Dark Eldar units within 6” the Crusader Special Rule which allows them to roll 2D6 for Runs and pick the highest and also consolidating an additional D3 on top of the D6. 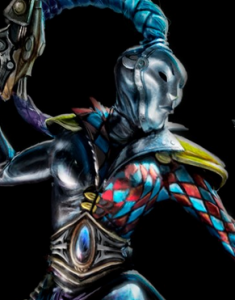 Next up was figuring a delivery method for the Star since most of the Psychic powers were 18” to 24” range and the LD bubble was 12”. For adepticon with their near limitless source allowance, I considered an Archon with a Webway portal because he could also purchase a 6” -2 LD modifier bubble as well and allow me to pinpoint deep-strike the unit within maximum threat range for it to be effective but it also meant I was depended on a reserve roll and that my opponent had little to no interceptor since he could intercept before I could cast psychic powers. Than for ITC format, I decided to steal an idea from Dr Insanotron aka Ben Cromwell which was to purchase an Imperial Bunker with an Escape Hatch upgrade to basically function as a pseudo webway portal.

Before I enter into core army mechanics, I feel you guys probably would want to actually this list I am talking about!

The French Overlord’s “The Last Laugh”

The core mechanic of the list is what I like to call “Laughing your opponent units off the stage” (you can all applaud me for that name in your dark cold rooms who’s only light source is the light from your monitors). As you can see there is fair amount of Psykers in the army, a Total of 14 Mastery levels giving you a range of 15-20 Warp Charge dice a turn. The important element here is that there 3 Separate units (the Farseer, the Spiritseers and the Hemlock) in the army that can cast Psychic Shriek which is by far the most direct way of “Laughing your opponent units off the stage”. The Spiritseers can also get a shot at “Embolden/Horrify” which can drop a unit LD by another 3 modifier as well as the Hemlock Wraithfighter which gets Terrify which can drop them by another -1 LD. By the magic number is -5 LD and I will explain why. You will always roll on the Phantasmancy table for the Shadowseer because you auto gain Veil of Tears and because there are some great powers in there but most importantly there is “Mirror of Minds”. The MOST OP power combo in the game with a -5 LD modifier, as some of my opponents found out lately. Let me explain to you all what “Mirror of Minds” does, it is a Warp Charge 2 Focussed Witchfire power that is a pseudo Mind-War but there is a large mechanic difference. Your Target Model and the Shadowseer roll a D6 and add their respective LD, if the result is Equal to the Shadowseer or less than the Shadowseer, the target model take a wound with no armour or cover save. Repeart this PROCESS until the target model beats the Shadowseer which IT CANNOT DO when the Highest it can roll is an 11 and the minimum a Shadowseer can roll is an 11 (due to the -5 LD) so it equals to basically auto removing a model. 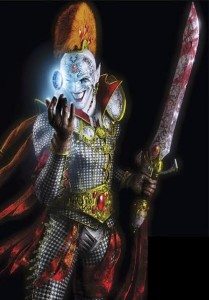 As you notice there is a lot of synergy effects happening in the list with the psykers. They can Shriek, they can lower LD, they can cause Morale tests (and with the Hemlock Wraithfighter on the table cause them to reroll successful pass) and finally with the Deathjester “Death is not enough” rule, you can even make units which only are in range of the bubble run away with a whopping -4LD by killing 1 model. I typically start rolling on Telepathy on the Spiritseers for the first two to try gaining access to Invisibility, Shrouding, Terrify and Dominate. If by the first two spiristeers, I don’t have invisibility, I would roll on the Farseer next to hope I can finally get Invisiblity and if I don’t have it, would keep rolling on it for the last Spiritseers. If you do gain invisibility I would try to roll on Runes of Battle on the last 2 Spiritseers for Embolden/Horrify, Protect/Jynx and Quicken/Restrain which come in useful throughout the game. The Shadowseer is really looking for Mirror of Minds, Fog of Dreams or Dance of Shadows. Fog of Dreams is really useful when you fight armies with a Lynx to basically shut it down since it forces it to snap shoot when the power goes off and Dance of Shadows is really useful much like Shrouding to beef up the Halequin unit defensively because even with Veil and Invisibility it can die gloriously. Some would recommend also taking summoning on the Farseer which is a good recommendation but I don’t think I even have enough charges to both cast Invis, all the LD modifiers and Shrieks to cast a Summon reliably.

Now, while the core army mechanic is the “laughing your opponent’s units off stage”, you can’t forget that the Harlequin Troupe themselves packs quick a punch in melee. With WS5, I6, and 3 attacks, a basic Harlequin with Hit and Run + Furious Charge is nothing to sneeze at . Equipped with the Caress they become an all-purpose death tool. The Caress functions much like the old Harlequin kisses aka 4th ed Rending. Any roll of a 6 to Hit results in an automatic AP2 wound or auto glance which basically means they can tackle any threats through sheer volume of swings. The one rule clarification I would like for the Caress is if the roll of 6 hits are removed from the pool of hits when they trigger their automatic wounds/glance as currently written it is not clear. In case you fight an ad-lance I would recommend having the Farseer take Prescience so that they can re-roll their misses in melee. Do not forget that the Shadowseer and Deathjester also have Haywire Grenades purchased.

The rest of the army is pretty obvious mechanically with Wave Serpents and Hornets to provide backfield fire support to the Harlequin star. Keep in mind that the Bunker functions as both a delivery system for the Star as well as protection from turn 1 shooting assuming your opponent did not bring some bunker breaker firepower! What do I mean by delivery system? I would deploy the Bunker in the middle of deployment edge with the backdoor entry point facing my opponent and I would drop the Escape hatch when I deploy them in it exactly 12” in no man’s land preferably in cover so that when they emerged from it on turn 1 they are not just 12” into no man’s land but 18” in and in cover as well. The reason for placing the bunker with the entry door facing my opponent is if he infiltrates on top of the hatch to prevent me from using it, I can exit the start from the entry point and assault them on turn 1. (Repel the Enemy). 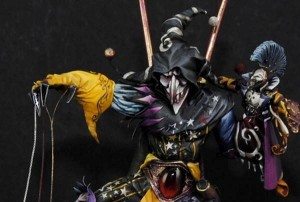 Well I hope you enjoyed reading about “The Last Laugh” as much as some of my opponents got to see it in action at Adepticon! I will be answering questions in the comment section as often as I can.

38 Responses to “The Last Laugh”