Dark Angels, Hot or Not?

You are here: Home › Uncategorized › Dark Angels, Hot or Not?

It’s Thursday, which means it’s time for an installment of Rawdogger’s Randoms. Today I’m going to discuss the much maligned Dark Angel codex. Constantly the red headed step child to the more athletic and handsome Codex Space Marines, the Dark Angels seem to get the short end of the stick edition after edition due to their place in the order of codex updates. I myself have been known to harp on the poor Dark Angels from time to time, though deep down I find that I have a soft spot in my heart for the poor zealot bastards. While the codex does suffer from not having some of the cool toys Codex Space Marines get to take to the table and having a supposedly elite force made up of not so stellar Terminators, there are bright spots to be found. Just not in the Deathwing section. Ever. So let’s look at some of the units and war gear options that will make you want to swipe right when building your Dark Angels competitive list. That’s a Tinder joke in case you missed it.

So to start off we add a couple Imperial Knights…… 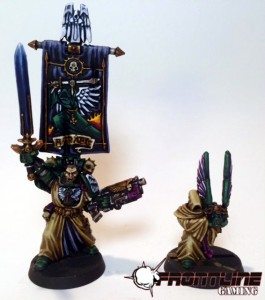 Let’s start with the main man with the plan, Azrael. He makes all Ravenwing and…sigh…Deathwing units Troop choices, which gives them the Objective Controlled special rule. This also increases the number of those units you can field. He is able to choose whichever DA Warlord Trait you wish, no need to roll for it. Though he is not stellar in terms of his stat line, having the same stats as a Space Marine Captain, it’s his war gear items that really bring him up in the power level. Thanks to his Lion Helm, he confers a 4+ invulnerable save to whichever unit he joins (you see this a lot in joining Astra Militarum blobs) and his special power armor suit known as Protector confers a 2+ armor save with Feel No Pain to Azrael himself. Nice one! His Sword of Secrets makes his power sword S6 AP3 , Master-Crafted and his combi-bolter Lion’s Wrath gives him a single 24” plasma cannon shot per game. On top of all this war gear he has the old Space Marine Captain character trait of conferring his leadership value to any DA models on the board and has the Inner Circle special rule, which makes him Fearless (and his unit) as well as preferred enemy Chaos Space Marines. That’s great since you will more than likely be seeing a bunch of Chaos Space Marine armies on the top tables at your next tournament…. 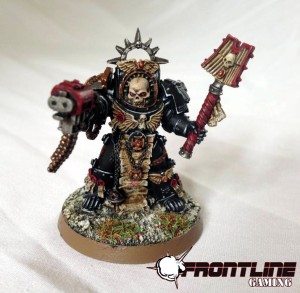 Yes I know what you are thinking, what the hell does a Chaplain HQ bring to the table? Multiple Sicaran Battle Tanks, that’s what BRUH?!? A large part of the problem that the DA Codex has is it’s lack of anit-flyer units. If you say flakk missiles I will reach out my hand from this computer and slap your face off. 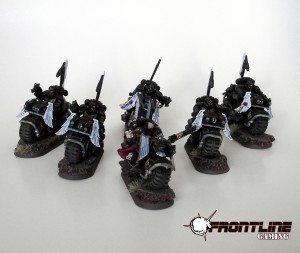 Here is the real meat and potatoes of the DA codex. The Ravenwing not only bring to the table the same speed and durability we have come to love with Space Marines bikers, but offer the DA player much more in versatility and lethality. To start off Ravenwing bikers can be made ob sec troop choices with the inclusion of Azrael or the Ravenwing special character Sammael, who narrowly missed being on this list. They come stock with Scout, which give the DA player a ton of options when choosing how to deploy their army. They also come with Hit and Run, which can be an incredibly useful and annoying tool. You think those White Scar chumps were the first to have that? Don’t even, OK? If you run a full 6 man squad you can attach an Attack Bike AND a Land Speeder, though the Land Speeder cannot join the squad and is vulnerable to high strength weaponry such as Bolters. Ravenwing also come with a free Teleport Homer which doesn’t matter much since you won’t be taking Deathwing, right? 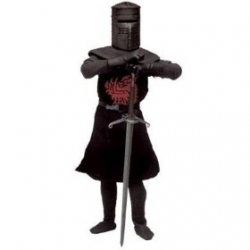 The Black Knights get all of the great things we discussed above with the Ravenwing Bikers, with the addition of some key war gear options and stats. The have an extra attack characteristic, which brings them up to 3 base with their Corvus Hammer and bolt pistols. The Corvus Hammer makes their attacks strength 5 with Rending. Umm, I’ll take three units please. The real gem of the Black Knights is the replacement of their twin-linked bolters with twin-linked Plasma Talons, which are 18” plasma guns on a relentless model. They do suffer from Gets Hot but the twin-linked rule does alleviate some of those concerns. You can have a model take a Ravenwing Grenade Launcher which lowers the toughness characteristic by 1 of any model that is hit by it’s blast. Thanks to the shooting rules in 7th edition you can fire that first, lower the toughness of the model you want to kill (Wraithknight) and then unload with your Plasma Talons. Just to add to the bad-assery the Black Knights come stock with the Skilled Rider special rule. 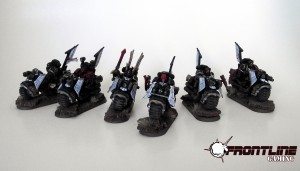 To build upon the building blocks above, the Ravenwing Command Squad has all the war gear and special rules of the Ravenwing Black Knights but can take even more great war gear options. One member is an Apothecary, giving the unit a Feel No Pain roll just in case those Plasma Talons decide to Get Hot despite their twin-linked nature. One member can be made into a Champion with some neat close combat war gear, but to be honest if you are in close combat with this unit something has gone terribly wrong. The real beauty of this squad is their access to the Sacred Standards. The unit can take one of several unit buffing banners such as the Standard of Devastation which gives all units within 12” the torrent 2/4 special rule for their boltguns as well as my favorite the Banner of Fortitude which gives all DA units within 12” the Feel No Pain special rule. Very important if you are running large units of Ravenwing Black Knights that are rapid firing Plasma Talons. The unit tend to get fairly pricey with these banners so protect them as much as you can with a durable character on a bike with an invulnerable save. 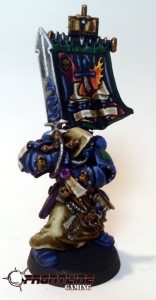 The Dark Angels have a lot going for them in the special wargear section. I find myself scanning the pages every once in a while and somehow finding a cool piece of war gear that I had missed previously. The top war gear piece that most will be familiar with is the Power Field Generator. For a mere 30 points, the bearer of this item confers a 4+ invulnerable save to any models (not just DA models) within 3”. The item has been recently nerfed by GW to say that an embarked model with the item does not confer the save to the vehicle they are embarked on. Oh well, you can’t win them all. Some other cool war gear items are the Displacer Field which gives the bearer a 3+ invulnerable save and the Porta-Pack, which gives the bearer and his unit the Preferred Enemy special rule if they kill and enemy character in close combat.

So there you have it. In every dog turd there is a grain that will one day sprout from the dirt to grow into a large tree or something. Not sure where that analogy was going but I thought I’d shoot for it anyways. The Dark Angels can be a competitive army but really need to include the units listed above with some help from Forgeworld and allies that can fill some of the areas where they are lacking.

What are your thoughts on the Dark Angels codex? Are there any units that I missed that stand out to you as must haves?

Posted on February 5, 2015 by Jason in Uncategorized

Leave a Reply to Nick W