Hello everyone, Frankie here, aka the World’s Greatest 40k Player. This is a tournament report from last weekend and my first tournament down in southern California at the Game Empire store where I busted out my Dark Eldar. Check out the Tactics Corner for more great tournament reports.

I went into the tournament not knowing too much about the comp, the format, anything. The World’s Greatest 40K player needs no preparation! What i did know was that I needed 1850 points, I knew they had paint/hobby scores and I knew the competition down here was pretty tough. Unfortunately my new tournament Dark Eldar list isn’t completely painted so I had to whip out the old one with the Corpse Claw formation. Not a bad list at all and will be a good test of the meta down here. So, I get to the tournament and, wow! what a showing. There are 24 players for a little one day RTT. Great turn out and I saw a lot of familiar faces from the tournaments we run. 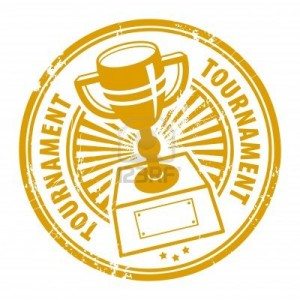 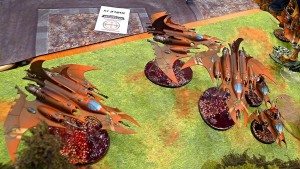 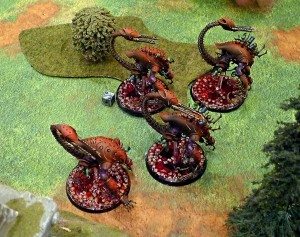 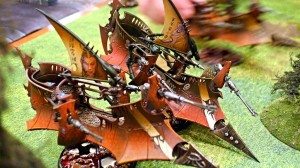 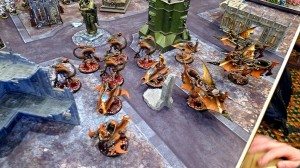 Alright, let’s do it!

Round one I pull an opponent that hasn’t gone to a tournament in about 5 years. Well shoot, this is going to be an easy game and not a great showing of the competition down here. He hands me his list and I kind of gloss over it, not too worried until I see a Fellblade…MOTHER OF GOD! My poor Talos will be ripped apart by that thing and I need to keep my Ravagers alive to hurt it. I need to think of a way to kill it and fast.

He wins the roll to go first and sets the Fellblade on the table right next to his Void Shield Generator, haha I will never kill that thing…..time for a new plan! He places his Red Scorpion Tactical Squads in two buildings in his deployment and the other one goes with Sevrin Lloth in front of the Fellblade. I keep my ravagers in reserve along with my Razorwings. My Talos deploy as close to the Fellblade as possible.

He shoots just about everything at my Talos doing two wounds. I luckily got night attacker as my warlord trait and got them a three up cover save. My turn I hide my Venom’s hoping that I can bring down the Void Shield next turn and migrate my Talos up close to a Tactical squad for a turn two charge. His Stormtalon comes on and surprisingly doesn’t kill a venom. The rest of his army shoots into the Talos killing one and bringing another down to one wound.

My turn a couple flyers come on and two Ravagers. My Talos get ready to charge either the Fellblade or the Tactical squad. Both flyers shoot into the Stormtalon and unfortunately don’t kill it. My Ravagers bring the Voidshield down to one shield and my Talos decide to charge into the Tactical squad after he tells me the Fellblade has 12 hull points, haha. A few more turns go by and we come to turn five. My Talos unfortunately died after killing the Tactical Squad and I lost my Warlord to a close combat with Lloth.

He contests my Emperor’s Will objective with his Scouts. I shoot his troop off of his Emperor’s Will objective and contest the center objectives that he was holding. Unfortunately I wasn’t able to shoot him off my objective and we end up tying the game 2-2 haha, sad day. Guess it’s not such and easy match-up after all. After walking over to turn in our score sheets I realize that my Talos killed a unit in CC which gives me one point towards the secondary. I verify with my opponent and re-work the score 5-2 Dark Eldar victory. That turned into a very close game and was a lot of fun. 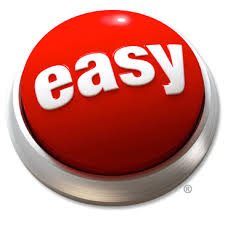 Game two I pull a fellow Dark Eldar Player which would be a good time to get through the dreaded Kill Point mission. Oh yeah, I forgot to describe the tournament format, let me do that, now. So, you got a pool of three missions and had to play each one throughout the tournament but were able to choose after you saw your opponent’s army. Then there was a set secondary as well. The Secondary on this game was to mark a unit as your communication unit and they gained objective secured and your opponent had to kill them to claim points. So, I picked my Talos as they are my most resilient unit. My opponent had two units of Grotesques , 5 Venoms, two units of Scourges and a unit of Reavers.

I get turn one and it is by far the best turn one I have ever had. Each Ravager kills a Venom and all of my venom’s kill both units of scourges. The explosions from the Venoms ends up killing a Warrior squad and 4 Wracks. My Talos also wiped out all but two of the Reavers. His turn the Reavers fly up my flank and the Venoms do two wounds to my Talos.

Turn two my flyers come on and kill the rest of the Venoms along with my Ravagers. My Venoms and Talos kill his Crone, Reavers and almost all his troops. His turn both Grotesque units come out of reserve and get ready to charge next turn.

My Turn I wipe out the rest of the troops and do 1 hull point to the Raiders. He charges in and kills all my Talos on turn 3.

Turn 4 I end up killing his warlord and blow up the last Raider. He gave me the game at this point. It was the craziest game I ever played, literally everything went my way. Everything I shot at died and the explosions from the vehicles were devastating for him. Awesome opponent though and we were able to laugh the whole time. Dark Eldar win 10-1. 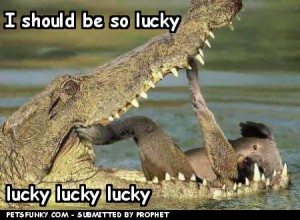 Round Three I pull the famous Copper Waddle, also the guy that will be running the Pub Crawl at the LVO. Cooper’s a fun guy to play against and a good friend. We had played a few times in the past as well and always had a great time. He is playing a White Scars list with a Sicaran, Fire Raptor and Sternguard in a Droppod with five Combi Meltas.

I get the Warlord trait to infiltrate the Warlord + 3 units which is awesome for this game and should help me to get First Blood. Cooper actually counter deploys me like a boss and keeps everything in reserve…. well shit, there goes my hopes of first blood. I should have left my Warlord in reserves. Why do I say that? Because I forgot to mention the Sternguard also have two heavy flamers…doh!

My turn one I keep all my vehicles close to the Talos so I can at least pick up a bonus point for killing a unit in close combat. Cooper drops down and kills my warlord with ease along with a ravager. He did combat squad so on my turn I am able to kill both units of marines and my flyer kills the Droppod. Cooper’s Sicaran, Land raider and command squad come in and are able to bring down another Ravager. My turn my other two Flyers come on and put their shots into the Sicaran which I am not able to kill. I am, however, able to bring the Command squad down to one bike and Khan. Cooper’s turn he doesn’t get any reserves and hides Khan and the Command Squad behind the Sicaran. My Flyers are able to blow up the Sicaran which is what I needed to do in order to see the bikes with my Venoms. My Venoms bring down the bikes with ease, and I then begin to make my way towards the objectives. Coop brings on his Fire Raptor and last two bike squads on turn four. The Fire Raptor is able to bring down two Venoms while his bikes make the other two Jink.

My turn five, my Troops and HQ’s come out of hiding and jump on all the objectives. My Talos and Flyers are able to kill all the bikes except for two. His two Bikes charge into my Venom that has linebreaker and holding an objective. If he kills the Venom, that will be the game as it will swing the objectives to his favor. The Fire Raptor was able to kill one Venom and my last troop. Luckily for me his two bikes miss and the lone Venom lives. The game ends up going on to turn 6 and I am able to grab all the secondary and primary points. Such a close game and for sure the most fun game of the tournament for me. Dark Eldar Win 9-2 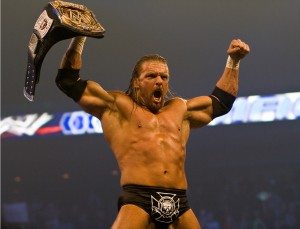 At the end of the event I end up getting second place because my army missed out on conversion points and I didn’t get quite as many points on round one as I needed. I came in second only by three points which was okay because the guy that won had never won a tournament before, so good for him! Over all I had a great time and can’t wait to play in the leagues they have down here. And of course, take some gold medals home from the tournaments as is befitting for the World’s greatest 40K player! Anyways thanks for reading, everyone.

21 Responses to “The SoCal RTT Experience!”

Leave a Reply to Aaron