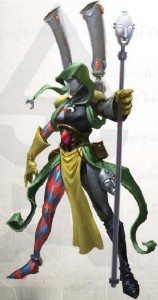 Who’s got two thumbs and is pumped for the potential release of the Harlequin supplement? This guy!

Harlequins have always been one of my favorite aspects of the 40k lore and I love the aesthetic as well as how the models play on the tabletop, too (usually)! So, GW essentially telling us that they are coming out on the 30th through hints in the White Dwarf and their YouTube vide is very cool, indeed. I had played them back in 2nd and 4th and had nearly every model in the collection. I always loved the crazy mix of looks combining elements of the clown, to the dancer with Mohawks and a ninja mash-up in a single model! 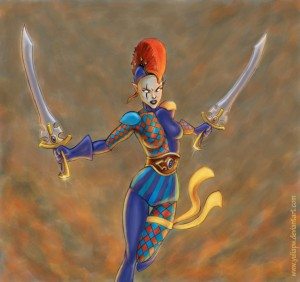 Harlequins retell the fall of the Eldar through performance and are monsters in melee on the tabletop. The rumored changes to allow them to rend on the to hit roll, a la 4th ed, is nutso! Anyone who remembers that edition remembers 6 Harlies out of a Falcon being able to mince dang near anything they touched. Some of the other cool rumored gear is the ability to get a single Str6, Ap2, Instant Death on a 6 attack, and D3 HoW hits at strength 6, Fusion Pistols and an AP2 Fleshbane pistol in adition to Haywire. Very cool! We will see how it all pans out once we get the release of course, but I am excited for it.

The big part of this for me though, is the Solitaire coming back. Yes! He has been missing from the game for quite some time and is one of the all-time bad asses of the game. Among the Harlequins, he plays the role of Slaneesh and as such, is doomed to potentially be consumed by the Chaos God upon his or her death (Cageorch, the Harlequin God does try to save them at that critical moment!). Beyond that, the Solitaire has also always been a monster of damage dealing. The rumored rules sound pretty solid, with potentially 10, WS9, rending on the to hit roll attacks at crazy high initiative on a super fast model: this guy can rock the house. And while he is rumored to be T3, 3 wounds with EW, he will die in short order to small arms fire. You have to play him smart to keep him alive. Plus, his Blitz ability which is rumored to be a D6 of movement for the game turn (potentially 7D6″ of movement, ignoring terrain and intervening models, wow!) that is really cool. We’ll see though, this is all just rumors now. 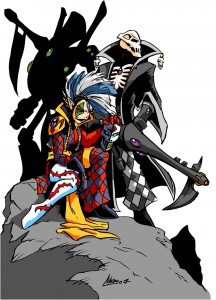 What I really want to see is if we get Shadowseers, Mimes, and Death Jesters? They are super fun and have always played a big part of the story of the Harlequins, too. Plus, Jetbikes, maybe? A Harlequin Wraithlord? Some type of transport?

But the big question for me is what it always has been: how to reliably get them into combat? At T3, expensive, and with only a 5++, they die like dogs to small arms fire. You HAVE to have a way to deliver them or they won’t be worth a hoot, even if they do hit like a freight train. Previously, Veil of Tears made them awesome at running up the table on foot, but that was changed with the current rendition of the Shadowseer. You could toss them in a Dark Eldar Raider, but if that thing explodes, most of the Harlies inside are going to die an expensive death…and you know they will be a high target priority.

So, we’ll see. That is the riddle you need to solve for the Harlequins to make them not only cool and interesting but useful.

What are you all most excited about with Harlequins?

Leave a Reply to defl0