Is the Knight Acheron the King? 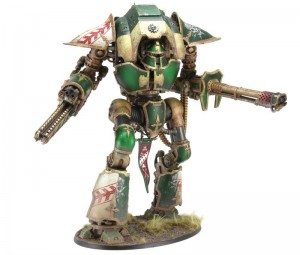 Knights are a bit of a hot topic with some folks, but I find them to be absolutely fine for all types of play in 40k. Even the much feared Adamantine Lance formation is not out of balance, IMO. Well, it is unbalanced in that it can be a very one dimensional army to play, but I don’t think it is anywhere as obnoxious as the Seer Councils of 6th ed.

That said, Forgeworld has been putting out some absolutely beautiful models in their new line of Knights that also have some really fun rules. In terms of in-game power though, they vary quite a bit. Some of them are a bit of a wet noodle due to some key short-comings. 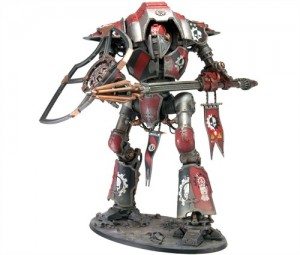 The Knight Lancer, for example, is a near miss, IMO. He’s an absolutely stunning model, but, at his price point he just misses the mark. If he just had a Heavy Stubber, he’d be a stud. As is, his really nice shooting attack is often a liability as if it destroys what you are shooting at, you lose the extra movement and offense of the Lancer’s formidable melee attacks. With a Heavy Stubber, he could shoot one target, then Stubber his melee victim and be much more versatile. Something that little really does have a big impact. Now, that is not to say the Lancer isn’t good, it is, but I don’t feel it is a top competitive choice. If you find yourself facing lots of other Super Heavy Walkers and Gargantuan Creatures, he certainly has a place, but as a general purpose unit, I think he falls a bit short. 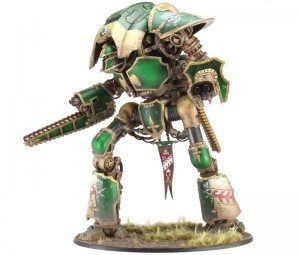 Enter the Knight Acheron! Now we’re talking! This bad boy is a beast, and sports several key, subtle differences that really set him apart from his brother Knights. For one, he has a secondary weapon in the twin linked Heavy Bolter under his Chain Fist. Awesome. That means he can fire his devastating Acheron Patter Flame Cannon at one target, and then assault another unit he fires the Heavy Bolter at. That alone is such a big advantage.

And his Flame Cannon is absolutely beastly! It is strength 7, ap 3, Helstrom Template (the giant flamer template), and ordnance. WOW. That is devastating. It will mow through infantry and light to medium tanks like nothing. Not rolling to hit, ignoring cover and most armor in addition to being Ordnance (roll 2d6 for armor pen, take the highest) means that this weapon is ultra reliable as you reduce so many variables from the shooting equation. This offensive potency on a chassis as fast as the Acheron (12″ move, 3d6″ run) is savage.

In melee, the Acheron has base 4 attacks and his Chain Fist is a D Slapper that rerolls 1’s on that D Damage table, meaning that if you hit a vehicle, you almost certainly destroy it. Brutal.

What this equates to is an all-around amazing unit whose only downside is that his brutal damage output means he will be a top, if not THE top, target for destruction on your opponent’s list. Knights are tough, but we play with them a lot in our local meta and fine that they almost always die. The Acheron is no different in that regard as his defense is the same as the other Knights.

He supported with dedicated AA and long ranged AT and numerous scoring units is a recipe for success if ever I saw one.

37 Responses to “Is the Knight Acheron the King?”