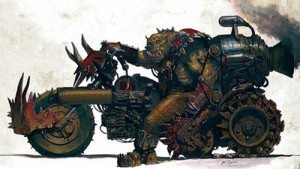 After having tried Zhadsnark out, I can say he is fantastic and this has lead me to a few more ideas on how to implement him in games. As always, check out the Tactics Corner for more great tactics articles!

We reviewed Zhadsnark here, if you want to get up to date on who he is and what he does.

Caught up? Good, let’s roll. So, after taking him out for a spin, I can attest to the fact that he really is a boss. Zhadsnark gives so much to an Ork list that they need, it isn’t funny. He fights well, better than a normal Warboss, but more importantly he gives you that solid troops choice Orks want. Warbikers are flat out a superior troops choice to Boyz or Grots in this edition. Due to their higher toughness and 4+ save, they largely get around the crummy Mob Rule. Mob Rule means if you fail a morale test you can avoid that result by beating the crap out of your own unit. Normal Boyz can get owned by this with T4 and a 6+ as you take D6, strength 4 hits. Now, with Warbikers you will take less wounds and save more of them.

Warbikers are also fast (obviously), so they don’t need a transport as Boyz often do. This also means less kill points per unit (Boyz+Trukk). They also shoot really well, better than Shoota Boyz as you get 3, twin linked strength 5, ap5 shots per biker. They also have better offense than a Slugga Boy due to Hammer of Wrath, and better defense than an Ard Boy due to Jink, T5 and the 4+. Plus, they get +1 to their jink save if they Turbo Boost, for a 3+ in most instances (if the unit is with Zhadsnark, it goes up to a 2+!). In all you get a great troop unit, particularly if your detachment grants them ObSec.

I used to run a 6 Trukk Ork list, all with Boyz with a Klaw. I remember wishing I could take even more Trukks! The reason it works so well is that it was fast and you could put multiple Klaws into a single combat, which is where you do the majority of your damage. Especially now with the challenge mechanic, having only 1 Klaw in a combat can stink as you can get killed before actually swinging it. Having multiple Klaws in a combat ensures that at least some of them swing. My Trukk Boyz did so well because I could hit one tough unit with 2 or more Boyz mobs and then let the Klaws that were 12 bodies deep, do the killing. Now that Trukk Boyz got nerfed so hard (Trukks are brutal for lightly armored units like Boyz), and First Blood being such a big part of the game, this list concept just doesn’t work so well, anymore.

It occurred to me though, that you could get the same effect with units of Warbikers. For roughly the same points investment, you get a unit that performs a similar role, better.

That is really comparable, points wise. Now, there are pros and cons each way, but, IMO the Warbiker unit is superior. You get less wounds yes, but those wounds are more resilient. You get FAR better shooting (18, twin-linked strength 5, ap5 shots vs. 15 sluggas, lols), the same mobility, the ability to jink for cover anywhere, possibly with a 3+. Plus, you only have a single KP vs. 2, and it is generally harder to earn. The twin-linked shooting also makes them quite a threat to FMC and low armor flyers, as well. The only detriment is inferior assault power, but not by a ton. Again, the Klaw does most of the killing with Orks.

So, running 6 units of these gents, possibly 1 at a larger size with Zhadsnark himself, means you have 6 highly mobile, ObSec troops that shoot well and are a threat to damn near anything on the table. They can grab objectives all over the place, turbo-boosting and then jinking to be very durable, even in the open. All this for just over 1,000pts with Zhadsnark. Not bad! That leaves plenty of points for support units and purely killy units.

That gives you very strong offense and scoring power. Turbo Boost the lot of them forward turn 1, and you are pretty much in the enemy deployment zone. If they can’t kill all of your Bikers right away, you are multi-charging all over their lines the next turn and doing massive damage. Plus, you get to play an Ork biker army. I dig it!

I would consider supporting this biker core with either solid support units like Lootas, Dakkajets, etc. (no big guns, unfortunately as Zhadsnark prohibits them) or go balls out and take even more fast pressure unit like MANz in Trukks (MANz do quite well in Trukks), Stormboyz, etc. to create and MTO list (Maximum Threat Overload).

← We have a F.A.T. Mat Contest Winner!
Signals from the Frontline: Warhammer 40K and General Gaming News, Rumors, Tactics and Comedy! →