Another Ork Tourney Report from Loopy

You are here: Home › 40K › Tournament report › Another Ork Tourney Report from Loopy

Loopy’s back with a tournament Ork report! Check out the Tactics Corner for more great tournament reports!

Dirty Goblin in Queensbury, NY hosted another fun 40k event this month with a bit of a twist from our usual fare. Players were open to take Unbound lists and there were some special Halloween-themed scenarios.

For this tournament, I decided to take my Ork Bike list to see how it would work out.  I plan on either bringing this list or my Green Tide list to Da Boyz GT, but I hadn’t had a chance to try this one out yet… at least not since 5th Edition anyways.  Back in 5th, this list was pretty great as long as there weren’t a lot of deepstriking Heavy Flamers or Dreadknights.  The list was also really good at the beginning of 6th Edition with actual Toughness 5.  Sadly, the advent of the Heldrake was the straw that broke the camel’s back in regards to this list.  Dreadknights are on the rise, but Heldrakes are in decline and I think the list has some merit; not as a tournament-winner, but as a list that I can feel reasonably good about at mid-table obscurity while having fun.

All deployments for this tournament were Dawn of War.

For “Investigate”, you can choose to look at one of the Objectives and roll on a random table for 1 Victory Point.  The table has both negative and positive effects on it. 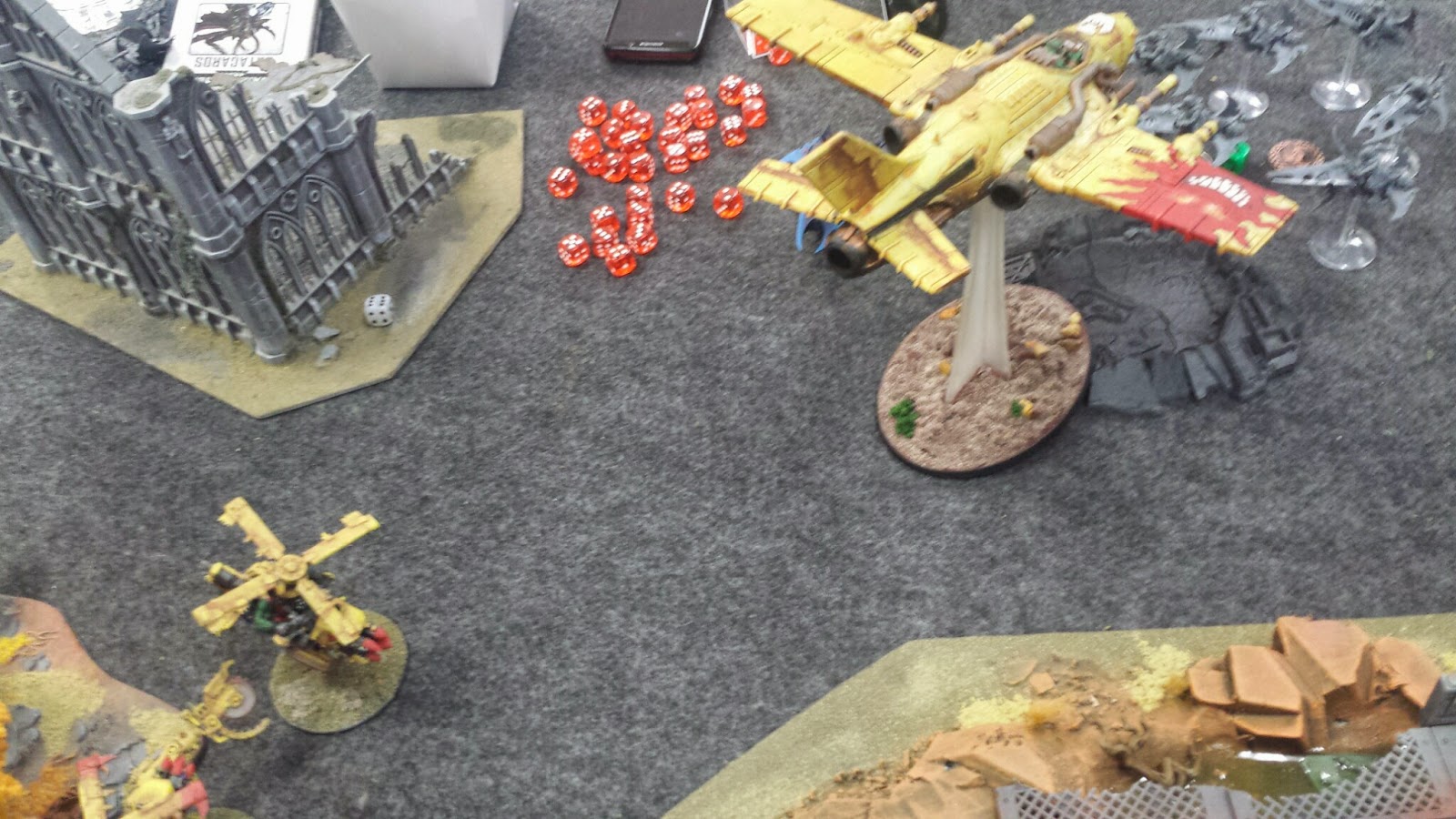 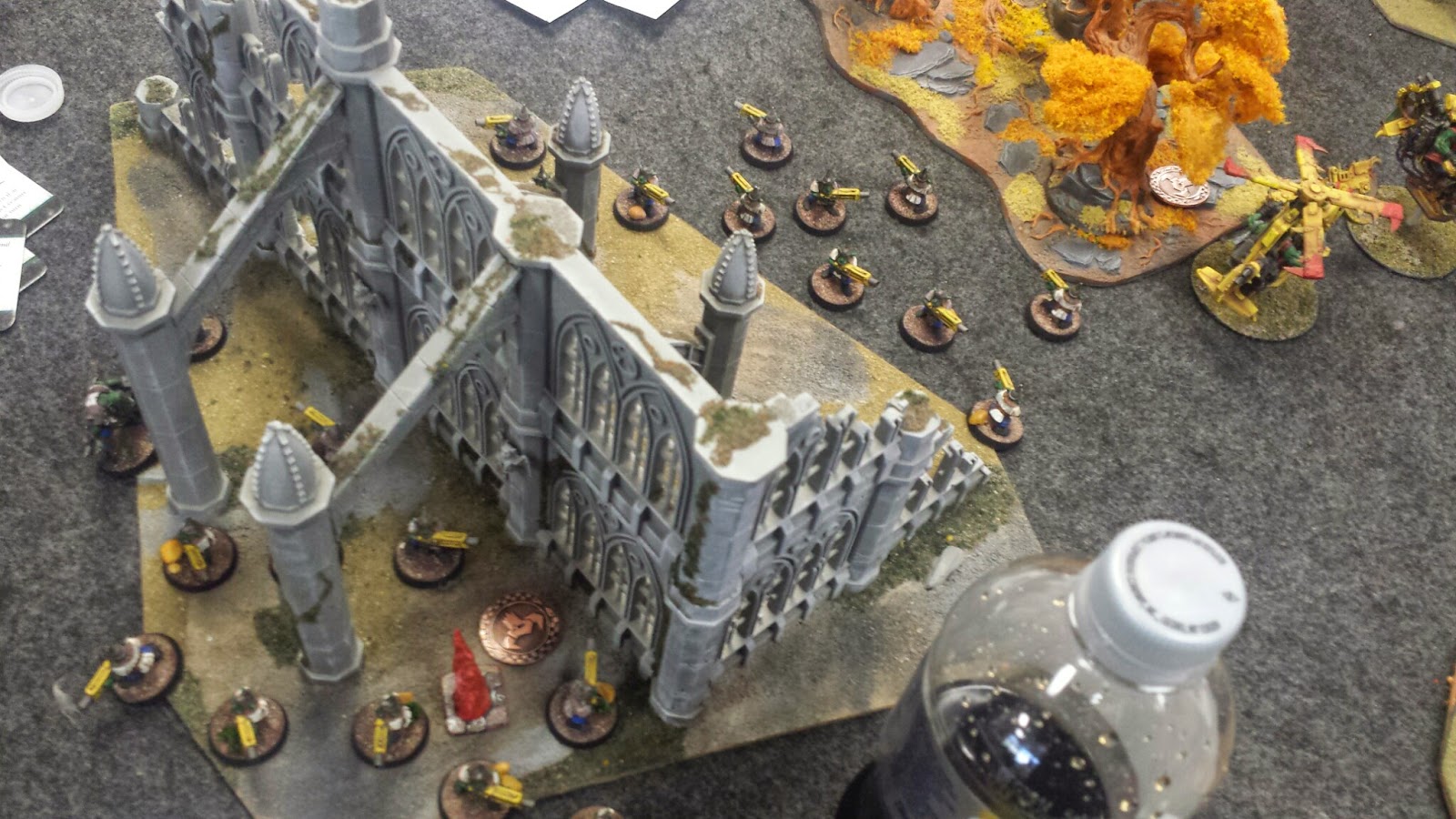 I realized halfway through the game that I’d cheated by taking a Warlord Trait; Zhadsnark’s “Warlord Trait” is basically the ability to take Bikes as Troops.  When I told Kendrick that he’d won the game, he said that we’d see how close the game was before we made that call.  In the end, we had tied on both primary and secondary objectives. That’s as close as it gets, so he agreed to take primary.  The score was still close thanks to tertiary objectives.

Primary: On the Prowl (Emperor’s Will)

For “On the Prowl”, we were playing Emperor’s Will, but there were two additional tokens with scattered around the board granting buffs and penalties throughout the game.

For “Night Stalker”, during your turn you nominate 1 unit.  When you wound that unit on a 6, it generates an additional hit.  If that unit is destroyed, you receive a Victory Point. 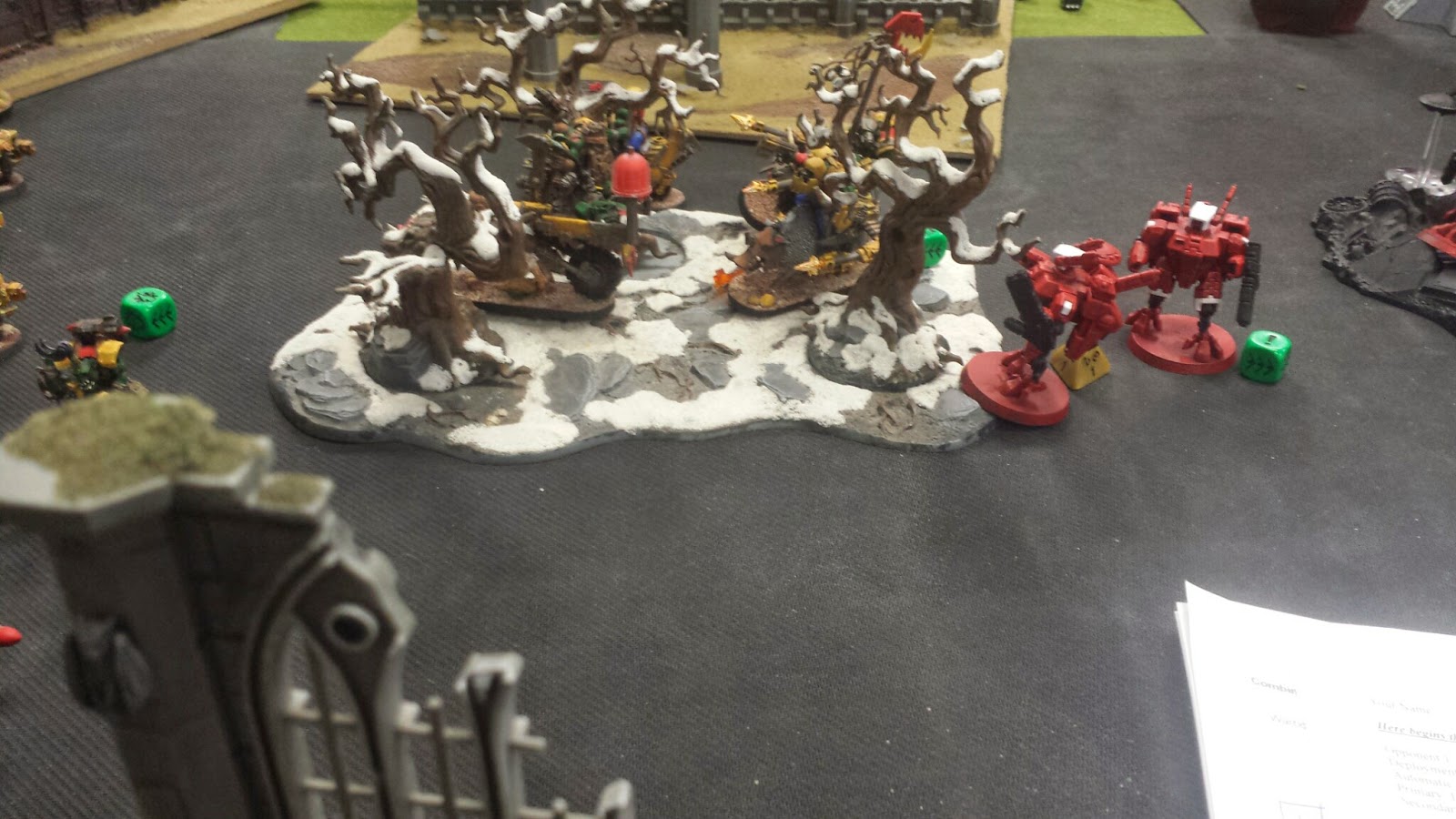 The game did continue for a bit after that, but I was so sore and exhausted that this was the end of the pictures.  In honesty, little mattered at this point.  Even though Bill’s missile unit (which is terrifying to my bikes with the AP 4 and Ignores Cover from Markerlights) is able to take out a few more units, I’ve run so far away to the other side of the table with my more fragile units that I clinch the primary objective.  However, Bill has taken secondary.

This is enough for Bill to take second.  Also, another player scores 1 more Battle Point than me and takes third.

Bikes are More Forgiving on Repositioning

In my game against Bill’s Tau, I was far too concerned about being out of position and spread out. Bikes do not suffer from the same kind of difficulties that foot or even armored infantry do.  I could have sent a unit of Bikes and the Nob Bikerz to take care of the Riptide on the right flank and would have been in a great position across the entire field to start taking care of suits when they dropped in.  Instead, I was forced to cross the board horizontally to take out the well-formed deepstrike gun line that the Suits were allowed to create.

Sure Wish I Could Take 2 Detachments

This list really needs a second Painboy on a bike.  Orks really really need extra HQs to be competitive.  The list is fine as it is and I think it will be fun to play, but I’m aching in my heart to be able to take another detachment.

So, I didn’t realize this, but regular Ork Bikerz do not have Stikkbomms.  This is rather unbelievable considering Boyz get them.  This is rarely an issue, but against the Tau it was kind of amusing.

What a wonderful unit.  He allows you to bring a themed Ork Bike list in a regular Combined Arms Detachment.  He is a dream in combat with an Initiative 4 Power Klaw, Stikkbomms, and Skilled Rider.  Although he lacks an Invulnerable Save, he is Toughness 6 and as long as I am smart with my target priority, he will do a lot of work for me.  He certainly did during this tournament.

Jinking with Orks is not the same as Jinking with other armies.  Going from BS 2 to BS 1 is a small price to pay for a 3+ save.  That is a fact.  Sure you’re going to have some trouble with armies that have dumb ignores cover shenanigans, but with some good target priority and with speed, this isn’t insurmountable.  Fact: models die, you just have to do your best to make more of theirs die than yours.

Curtis’s Eldar with 3 Wraithknights and all the Waveserpents took first place in this tournament and I never faced him.  Although I always get some kind of save against Waveserpents, the weight of fire is terrifying and the Toughness of those Wraithknights is quite daunting.  I’d love a chance to try this list against his Eldar before Da Boyz in November.

10 Responses to “Another Ork Tourney Report from Loopy”