You are here: Home › 40K › Detachments not Sources 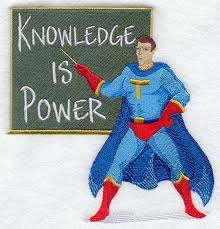 Hey everyone, Reecius here with a friendly PSA.

So, in the past we referred to building lists from multiple different books/e-books as writing a list with X number of sources. However, in the shift to 7th ed, that description no longer holds water and is actually misleading.

In 7th ed we had the advent of detachments. We had them in 6th of a different type, but the switch to 7th ed really defined it further while simultaneously opening it up. Now to be fair, the way it is presented in the BRB is a bit confusing, and the way the idea interacted with older books got really confusing with “blended detachments,” what was or was not a faction, etc. However, as 7th rolled along, it all came into focus with the books that were released.

That said, I still get emails almost daily from folks that are confused about how to write a list in 7th ed 40K. So, here is a quick and dirty guideline for writing a non-unbound 40K list in 7th ed.

Faction: what we used to think of as an “army” in 40K: Orks, Tyranids, etc. It is comprised of units with the same faction type. The list of factions in the BRB does not include all of those found in the game, but gives you an idea of the general idea.

Unit: a model or group of models that are the same faction: Tactical Marines, Dreadknight, etc. You can find rules for units across a multitude of rules sources such as in a codex, codex supplement, expansion book, Black Library digital section, Forge World Imperial Armor books, the White Dwarf, etc. A unit fills a specified battlefield role within a detachment. A unit can only ever be in a single detachment at a time.

Detachment: an organizational tool for using your units. It will require that all units in said detachment must be the same faction but can be drawn from any rules source (typically). A detachment can be a CAD, allied detachment, formation (and yes, a Formation IS a detachment, not a part of another detachment), or codex specific detachment such as the Dark Eldar “Raiders from Realspace” detachment, or the Haemonculus Codex Supplement “Covenite Coterie Detachment.” A detachment will have command benefits, and restrictions on how many of any type of unit can be taken. They can be as small as a single model (Assassin detachment, or a single Inquisitor) or include multiple other detachments as with a formation of formations such as the “Champions of Fenris” formation. Only the CAD, allied detachment and Skyblight formation have the Objective Secured special rule.

Dataslate: the dataslates provide rules for a specific unit that may belong to one or more Factions, such as Be’Lakor and Cypher. These are not detachments, but unique units with rules for how to play them and will fit into their battlefield roll within a detachment.

Therefore, the use of the term sources in the context of list writing in 7th ed 40k is a bit off the mark. It leads to the idea that you can only use a certain number of rules sources in a list when that is no longer the case. Using the idea of detachments is the better way to define list building in 7th ed because it is more accurate to the way we are given information by GW.

For example, you could write a list with a single detachment, but 4 or more different rules sources in that detachment: An Ork Faction army built using the Ghaz supplement detachment, the Grukk Face Rippa data slate from Da Red WAAGH! sourcebook and a Forge World unit.

So, it is in our best interest as a community to alter our verbiage to avoid confusion. When setting guidelines for how you want to play a game of 40K, stating how many detachments you would like to use, perhaps of what type, and then perhaps even limiting from which rules sources you draw your units, would be more specific and clearer.

I love the new system as we are always getting new stuff, it just takes a bit more defining to keep up with. Thanks for reading and happy gaming! 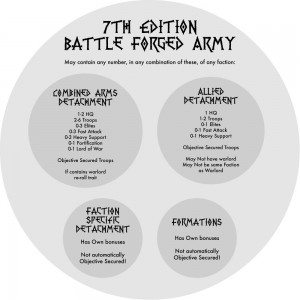 46 Responses to “Detachments not Sources”