Oh hello there Americanos! Simon here from 40kBrawl! back with another potty mouth batrep for you to enjoy!

Yikes…It’s been a while since I’ve written up a game – so go easy on me. Also, I’ve just turned 23 so I’m practically senile now too. ( lol #Oldmantroubles)

I always enjoy a game with Matt, we play competitively but always have a blast. He currently has a pretty gnarly Tank company in the works for a tournament coming up in November and so we test it out for a second time – this time against my tournament list – Nidzilla! So jumping in, a quick game overview;

( Apologies for the grey, the Tanks have literally only just been built!) 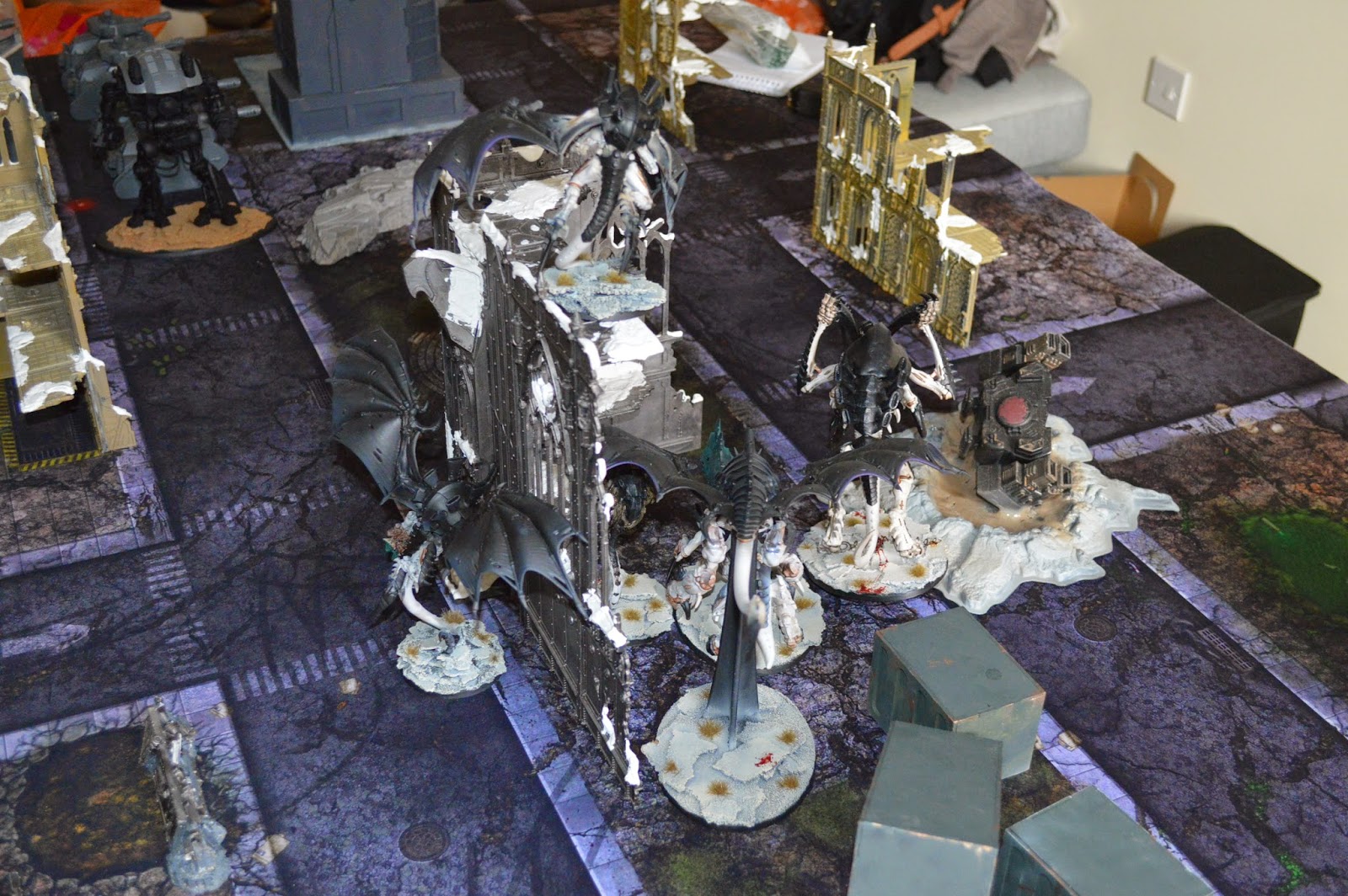 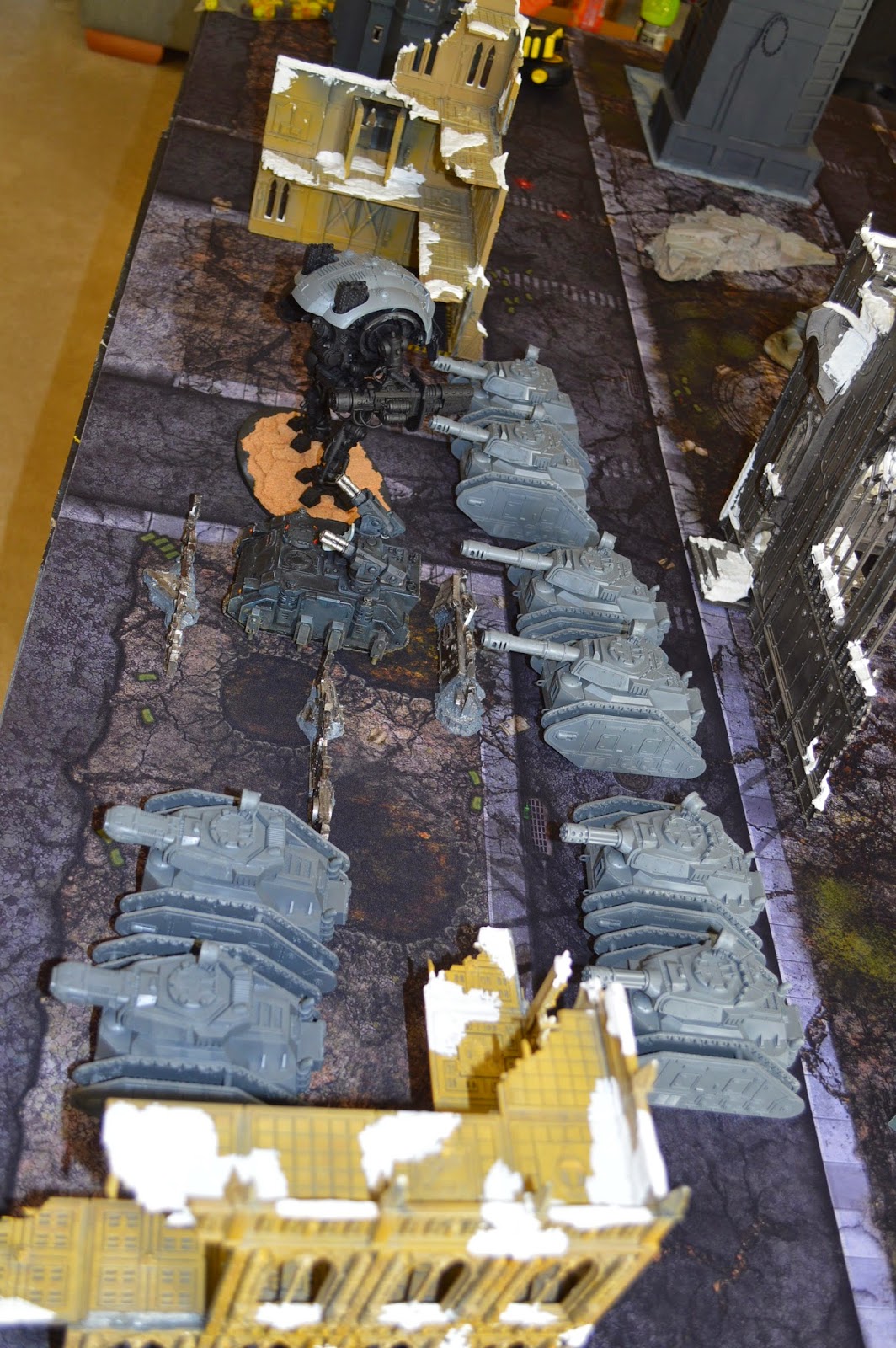 AV14… ah fuck. Not good for me at all. I was not confident in my list bringing this one home, especially looking across the field at 9 big tanks and a knight. My workhorse Flyrants definitely have a lot of work cut out for them in this game. The knight will be the key player for the Steel host’s side and will need to cause as much disruption as possible in the early stages of the game, so theres primary target number 1 for me. I win the roll to set up first and take the first turn.

Hammer and Anvil is not a good situation to be in for any Nid player but thankfully their is an abundance of cover on the board towards the centre, where the relic is. I deploy at the max 24″ range with the two Tyrants, Exocrine, Hive Crone and Dimachaeron all centred around the Malanthrope for 2+ Jink/ cover saves. 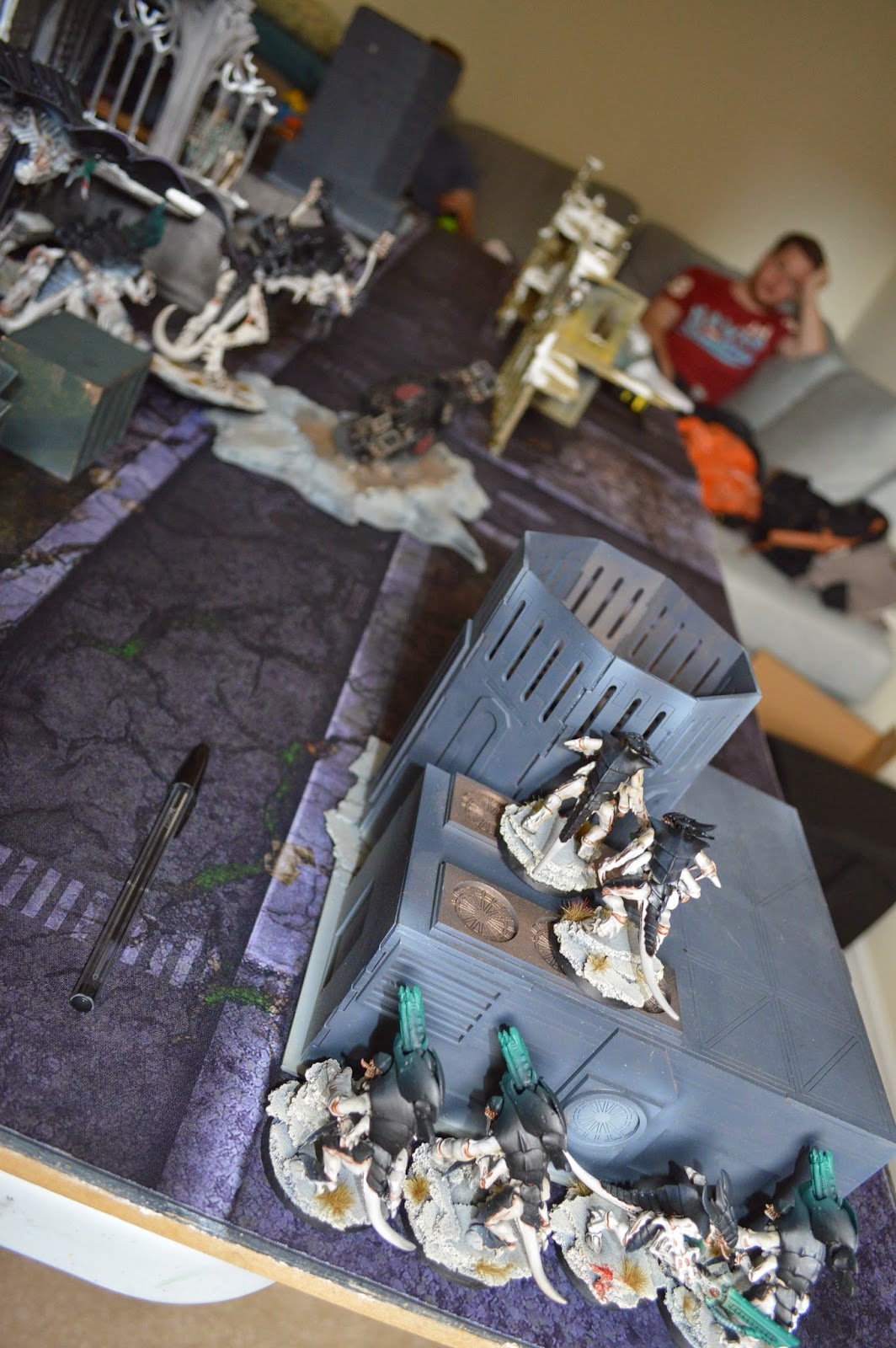 The rest of the LAN sit at the back of the board. Meanwhile, my brother nearly explodes with excitement on the sofa – Topright. The Steel host line up at the back of the board while the knight takes to the left flank at the max 24″. ( FYI ,The below photo was taken after the movement phase in turn 1, thats why you have an eager beaver knight!) 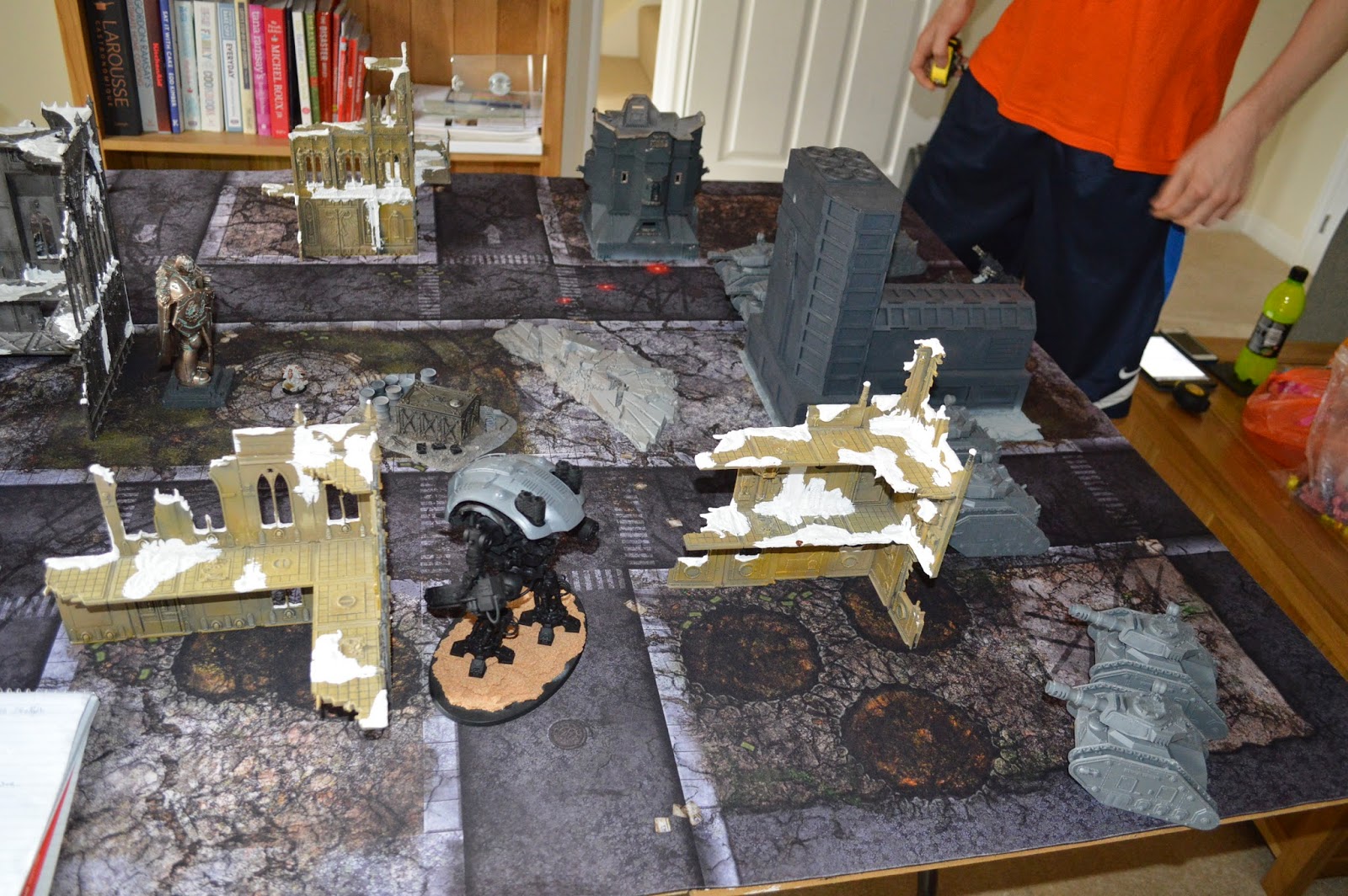 With deployment done, we roll on with the game. Matt decides to roll to seize and oh boy, he does! 😀 YAY! I hand over the tape measure in a huff and we get cracking.

The Knight power walks up the left flank like the King shit he is, while the Russ’s across the board line up their cannons, taking the Dima in sight. They unload a helltonne ( New demonic unit of measurement. Copyright 40kBrawl!) of blasts, bullets, shells and plasma upon the bundle of joy in the centre of the Tyranid deployment zone but only managing to pull off 2 wounds on the Dimachaeron. The Malanthrope has earnt his worth already, good job, my slithery son. ( That sounds pretty weird on reflection, ha.)

Both the Tyrants and Hive Crone take flight over towards the knights side armour while the Exocrine points its Fart Pooper ( Copyright Matt C) at the Knight. Their combined efforts cut it down to 3 HP. Both Tyrants now have catalyst ( as its the only spell worth manifesting…) 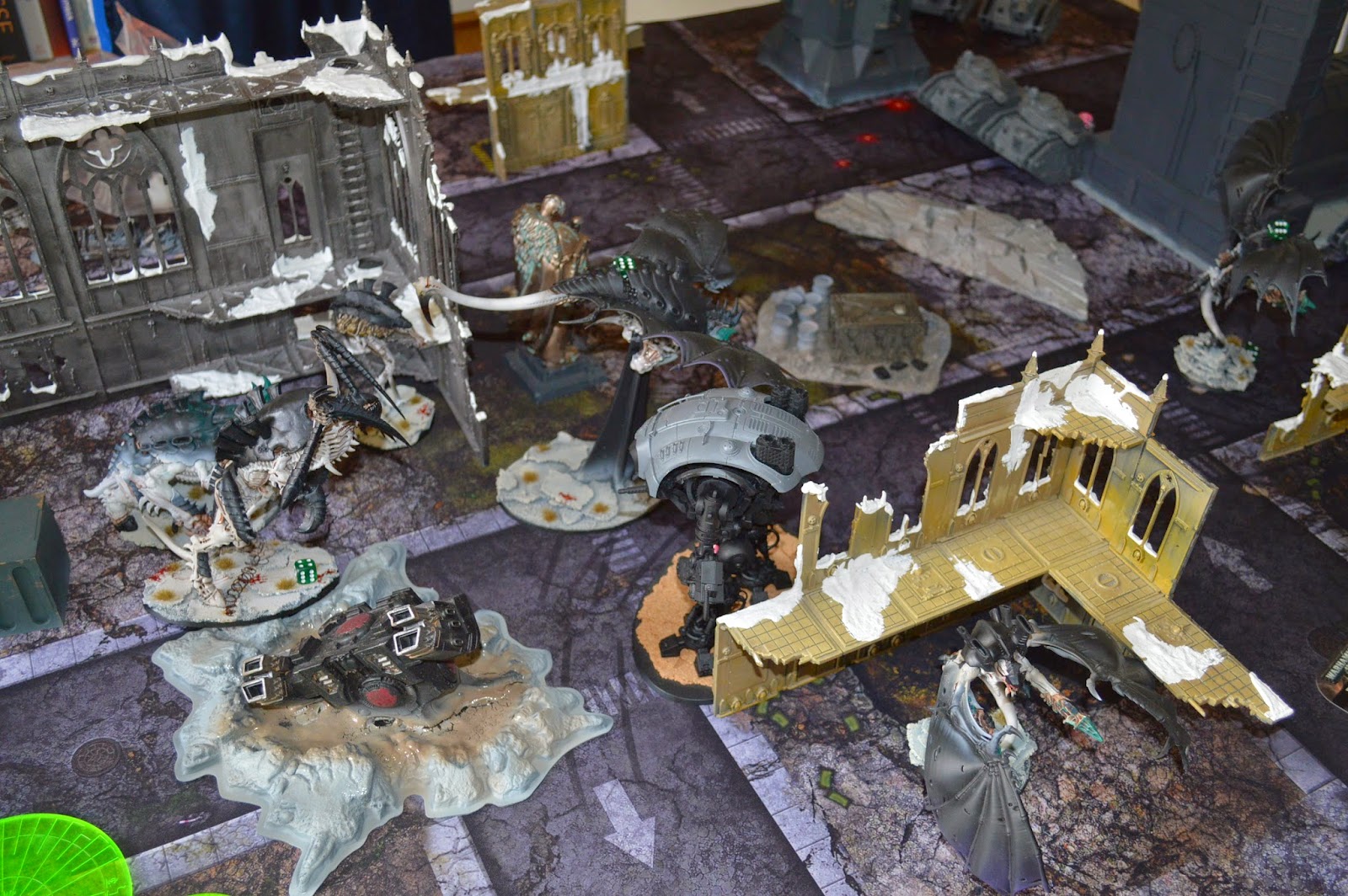 The Knight is looking fairly unshaken by the loss of hull points and stomps forwards, towards the Dimachaeron. The line of Russ’s reload their barrels and unload another round upon the Dimachaeron, Exocrine and Malanthrope and are more successful this turn, dropping the Exocrine down to 4 wounds and the Dimachaeron down to 1. Pask split fires, unloading into the Hive Tyrant cutting off 2 wounds while the other Punisher rattles it’s gatling cannon at the Hive Crone which successfully jinks every single shot away ( 2+ jink save, yessir!). The Knight rolls to charge the Dima to finish it off for FB but is just short on the roll.

Reserve rolls – 1 Mawloc and both ripper swarms drop in. The rippers pop up behind the Malanthrope for safe keeping while the Mawloc springs up behind the Exercutioners – hitting the rear armour of one of them… I roll for the first Terror from the deep hit –  A Penertrating hit! Result- weapon destroyed, haha! As the executioner isn’t destroyed the Mawloc is forced to come up again. I hilariously roll another penetrating hit on the rear armour and get a 6! what are the fucking odds in that?! haha! (I worked it out, 5.60% chance per hit!) (( If you can’t imagine Matts face at this point, its very similar to this.)) 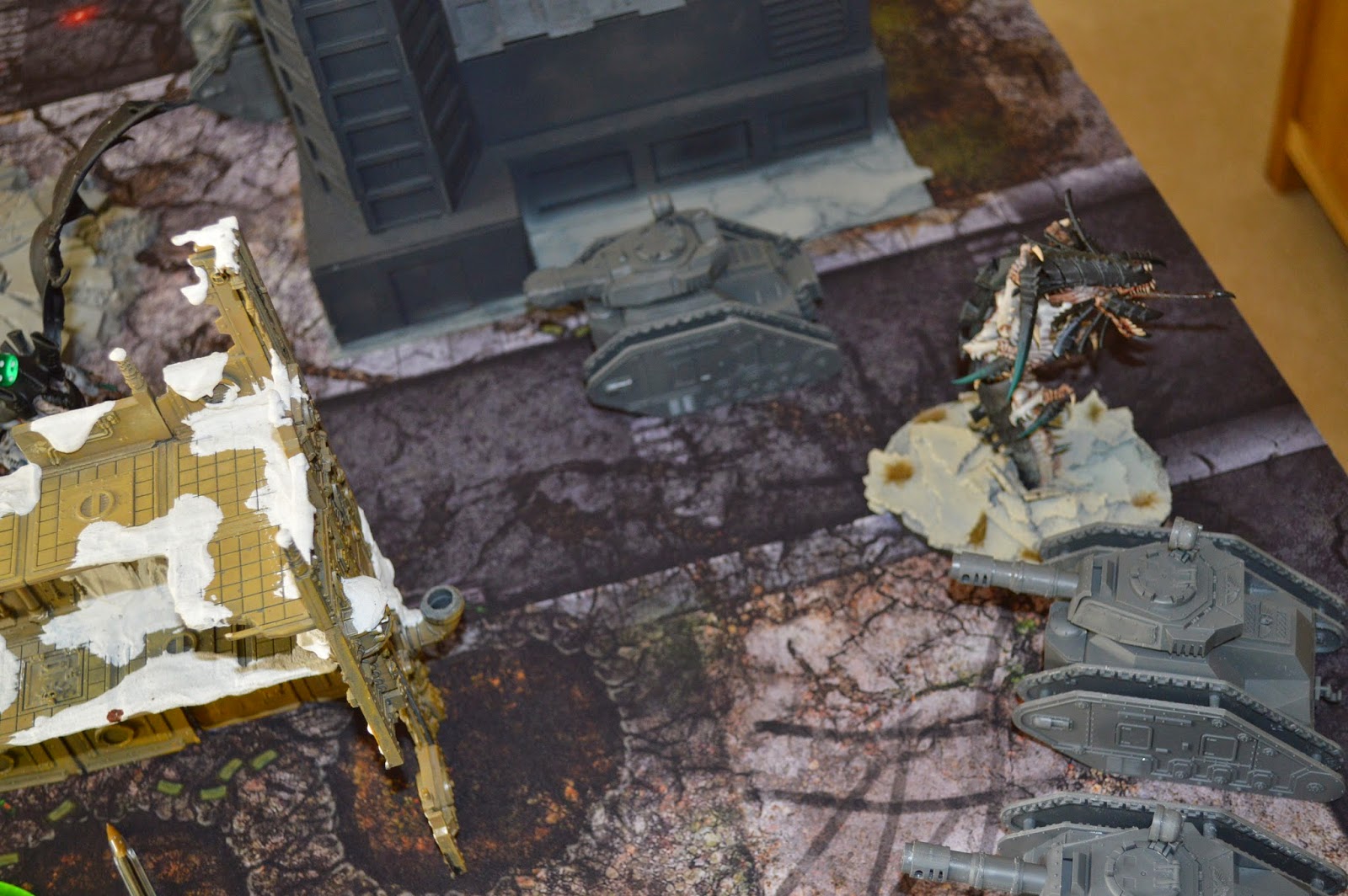 The Hive Crone vector strikes the Knight and cuts off another hull point from it, dropping it down to 2. Both Tyrants then devourer it with 24 shots, (12 of which are snap firing) finishing it off and exploding it for First Blood. Woop Woop! 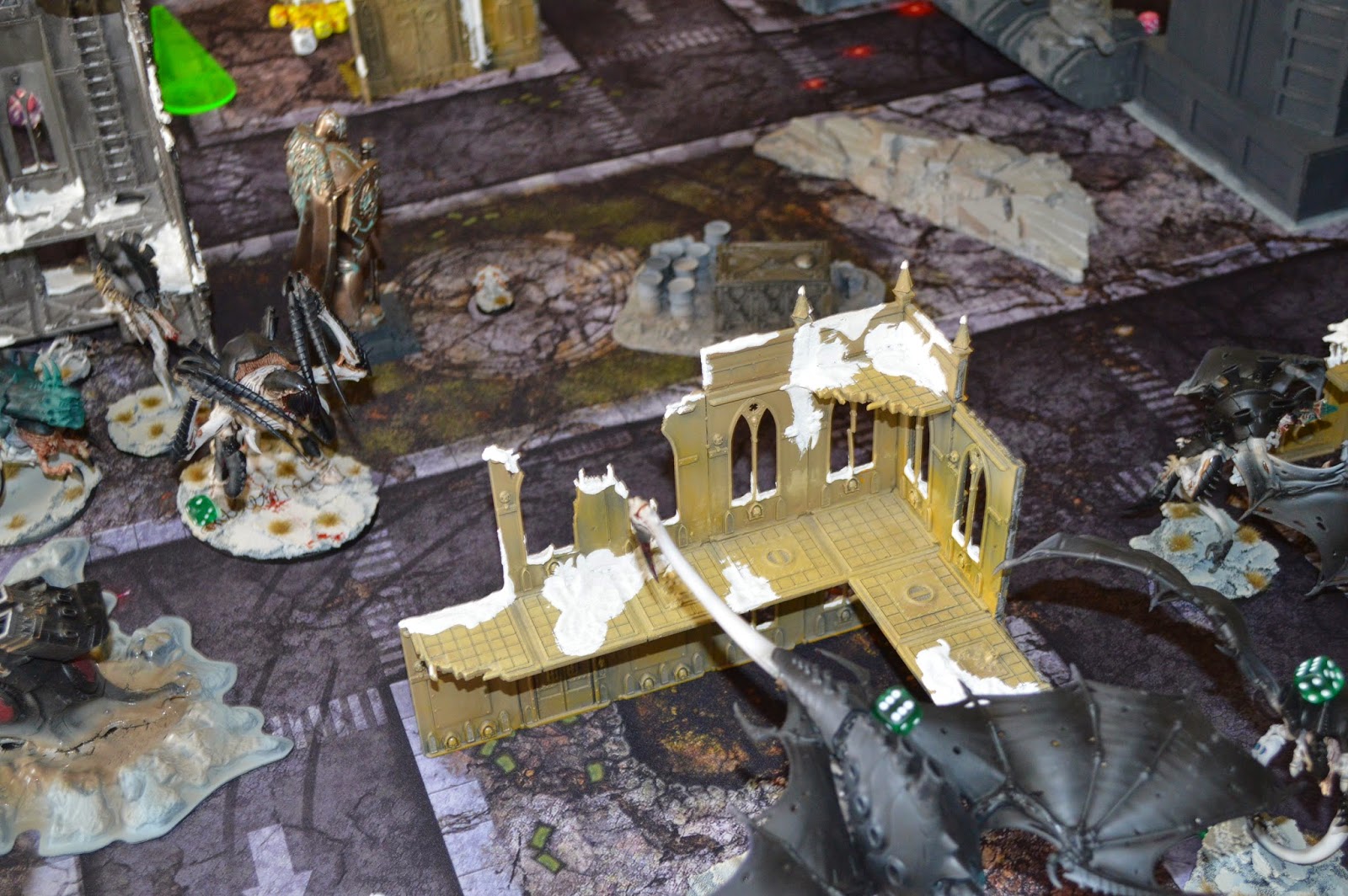 The Dimachaeron then scuffles back into the ruin to claim a cover save and the Hive Crone runs off the board into reserves.

With the Knight gone, the tanks have some jolly rough times ahead. They target down the Dimachaeron and remove the last wound on him. ( To give him credit, it took 40 shots from 2 punishers to gun him down. Hoorah! RIP.) The 2 Leman Russ’s aim their battle cannons at the Mawloc which happens to be a little too close for comfort… They BOTH scatter back onto themselves and cause glancing hits both times… haha! Oh wow. ( Sorry Matt, that was shit luck!)

The second Mawloc shows up, I bring him on in the IG deployment zone but in the safe, less busy side. The Flyhards ( New name, they have outgrown the measly status of Flyrants.) head over towards the Leman russ’s whilst the Mawloc worms its way over towards the last executioner. The Hive Crone re-enters play over on the left flank and fires the last of its haywire missiles at Pask’s Punisher, taking off 1 HP.

The Flyhard Warlord manifest Catalyst on itself and the other Tyrant and proceed to obliterate both Russ’s with their Electro grubs and Devourers. Goodnight and god bless. The Mawloc assaults and wrecks the last executioner. 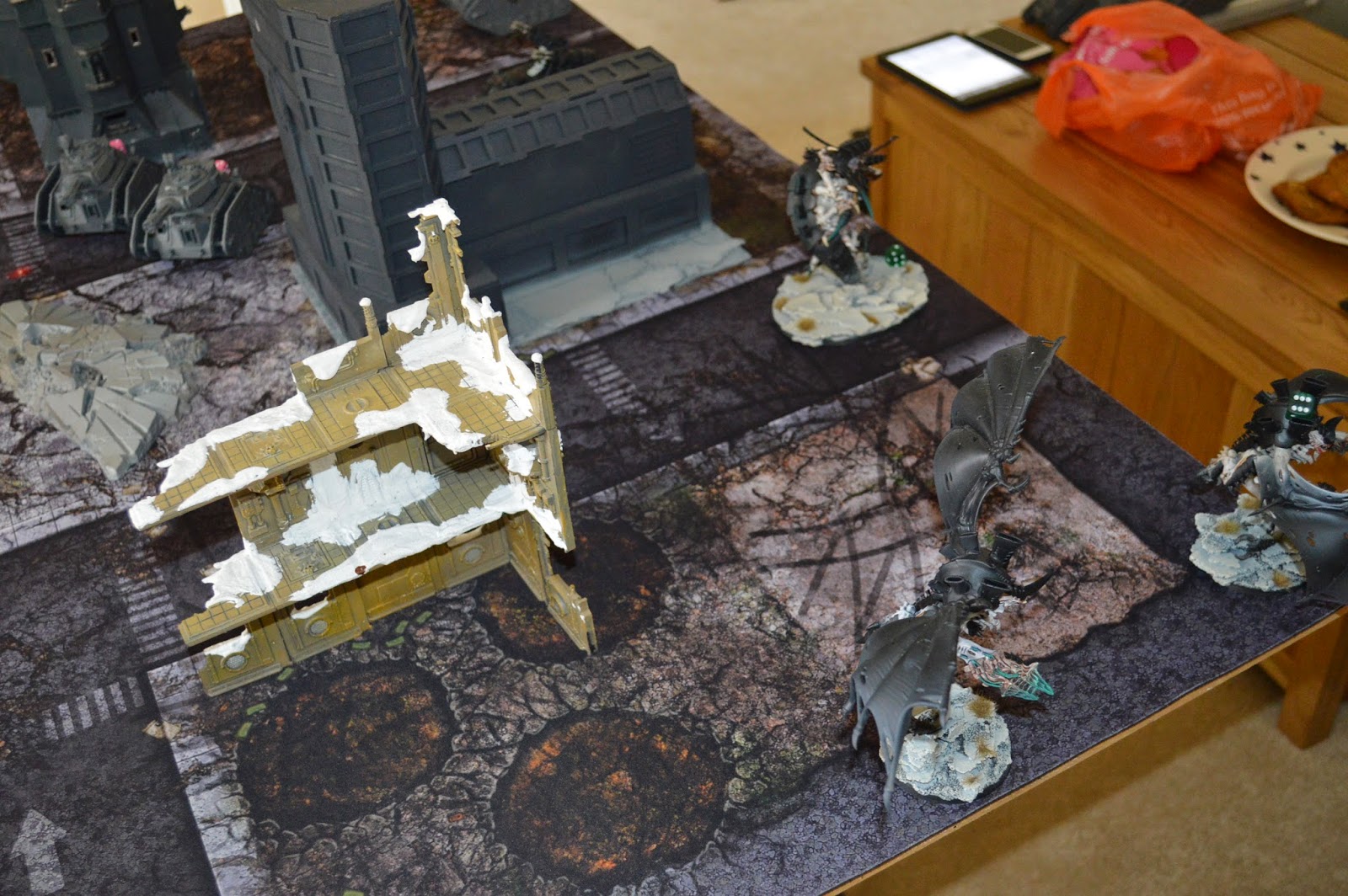 Pask points his Gatling cannon at the newly arrived Mawloc and shreds it down to 1 wound while the Vanquishers fail to harm the other. 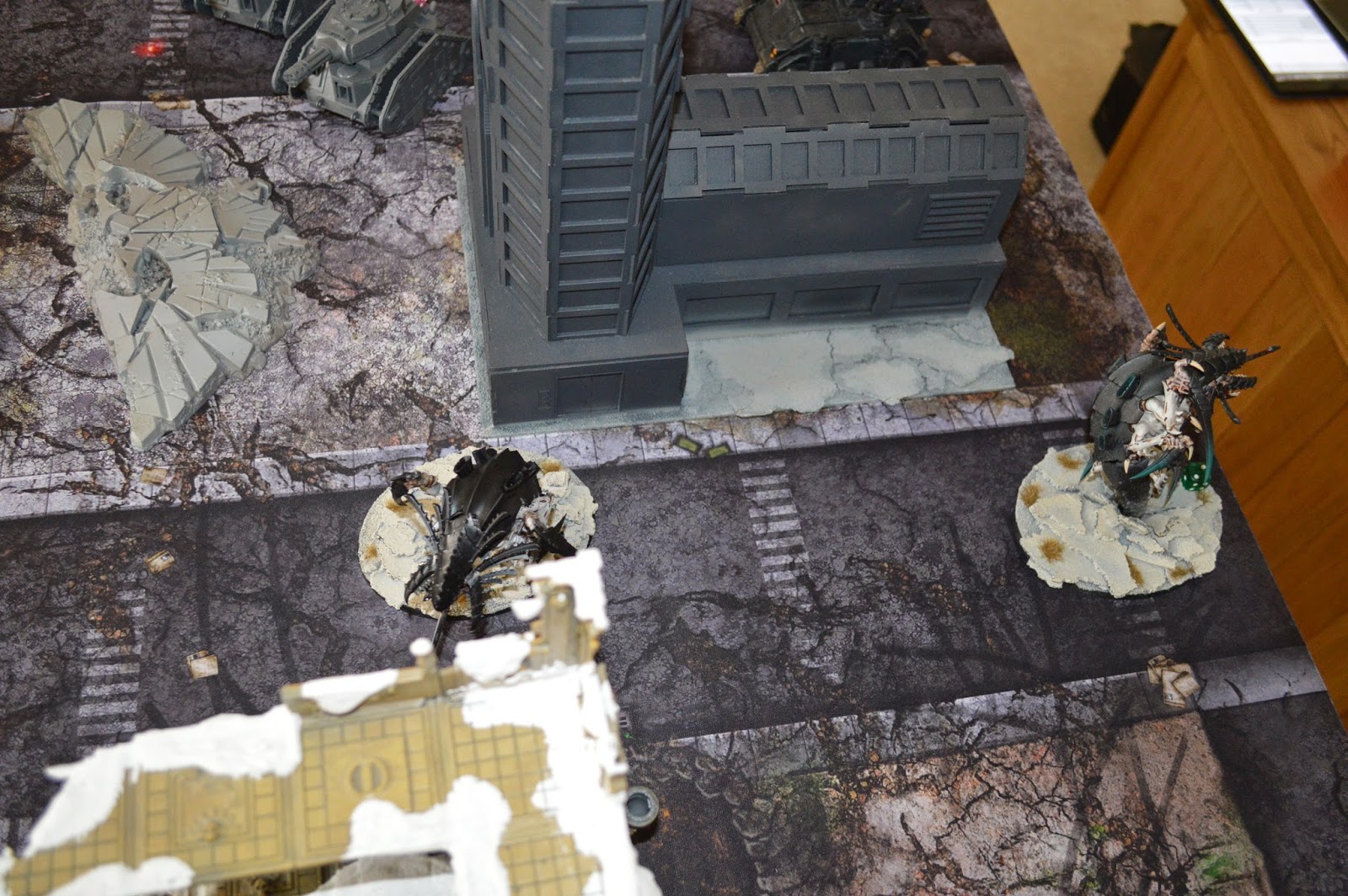 Mawloc on the right (above) burrows into reserves while the one on the left wiggles his touche over towards Pask. It cuts off one hull point and destroys Pask’s Gatling cannon with its Hammer of Wrath hit but fails to inflict any more with its talons. 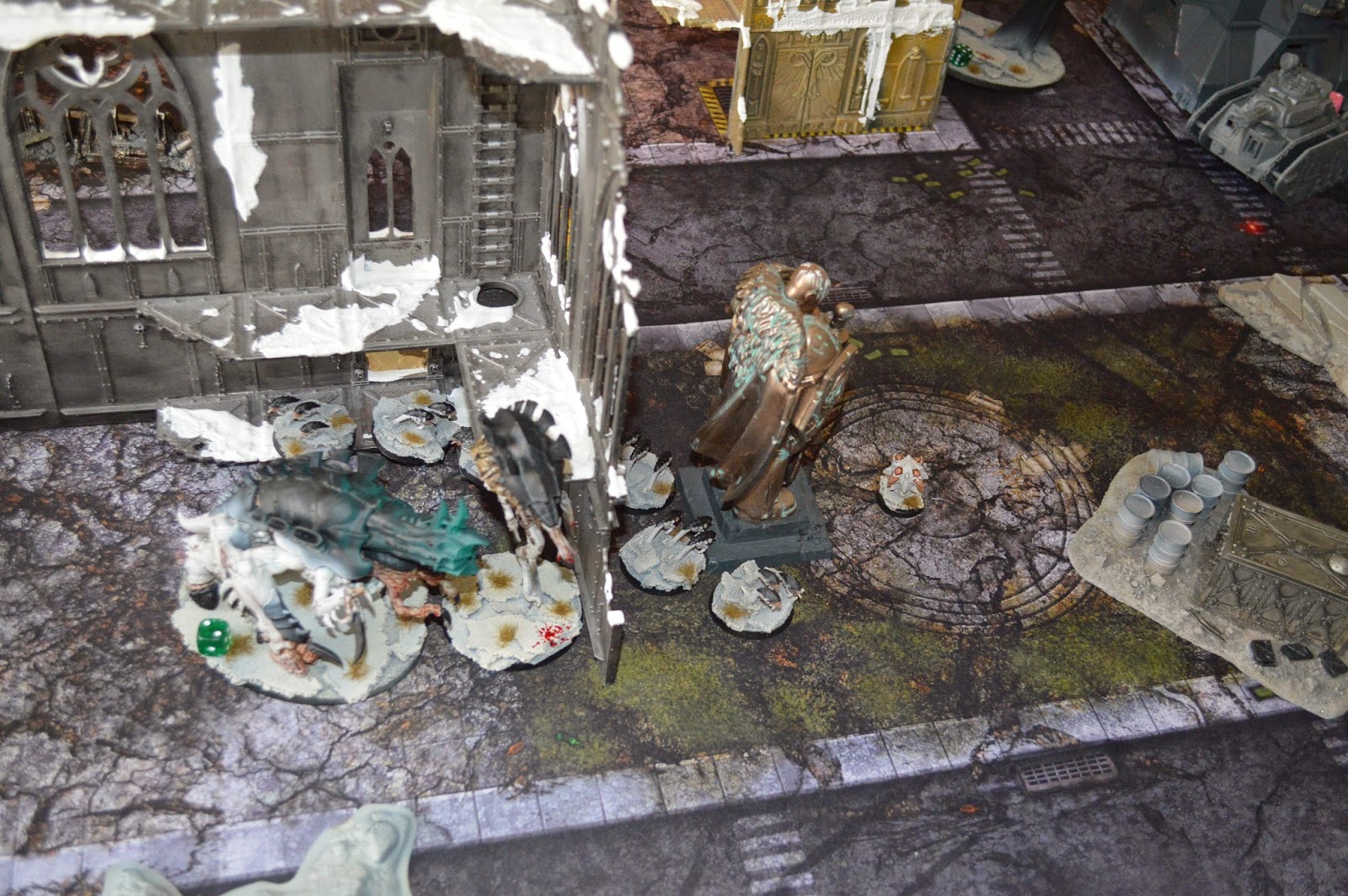 Both units of rippers move up towards the Relic while staying in the Malanthropes shrouding bubble. Both Flyhards drop down into Gliding mode and run forwards to hug the walls of the Laboratory. 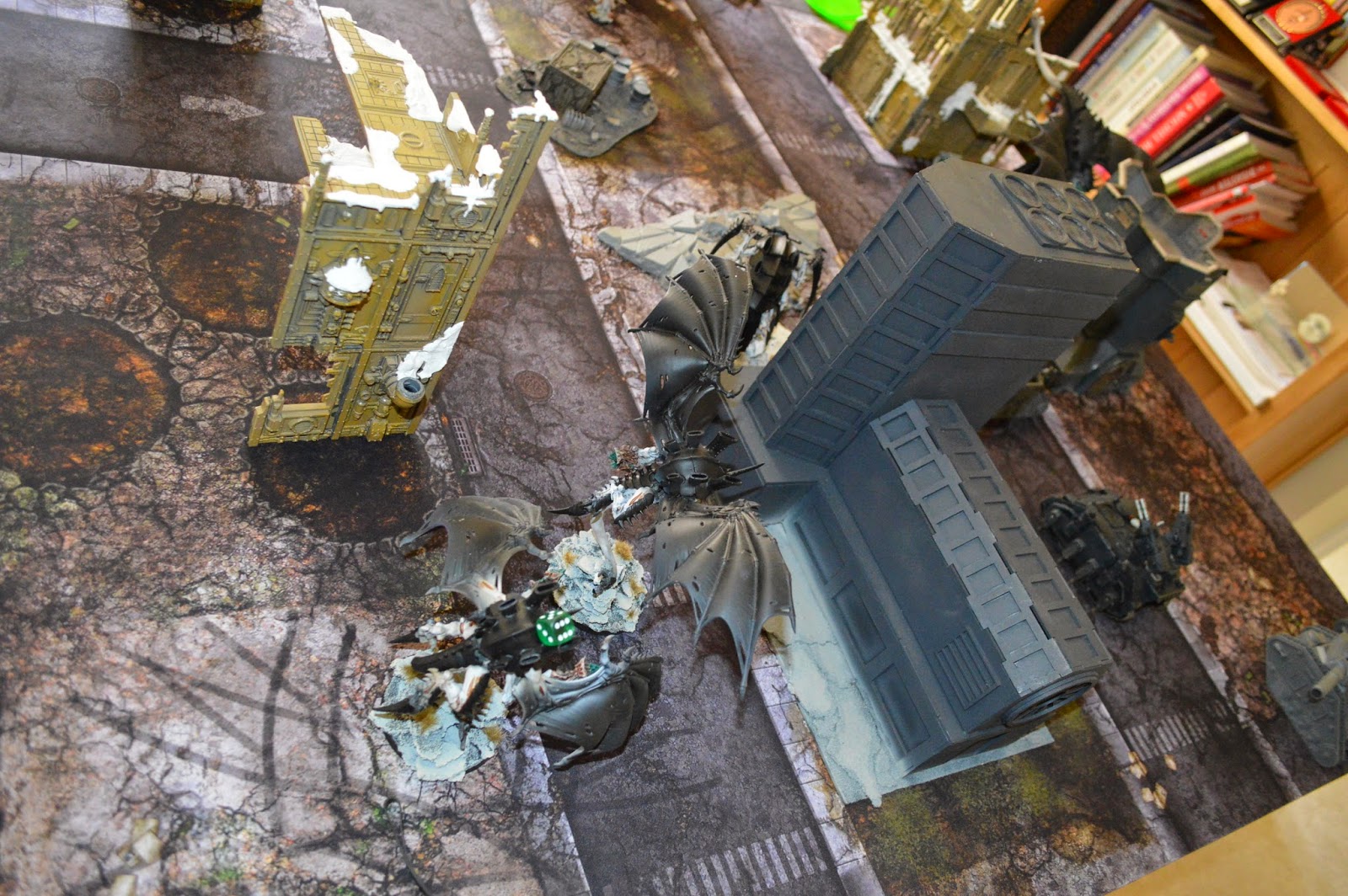 The Vanquishers take aim on the unfortunate Mawloc and dispose of it with ease while punishers unloads 20 Dakka on the Rippers, only killing 1 base… lol, Malanthropes <3. 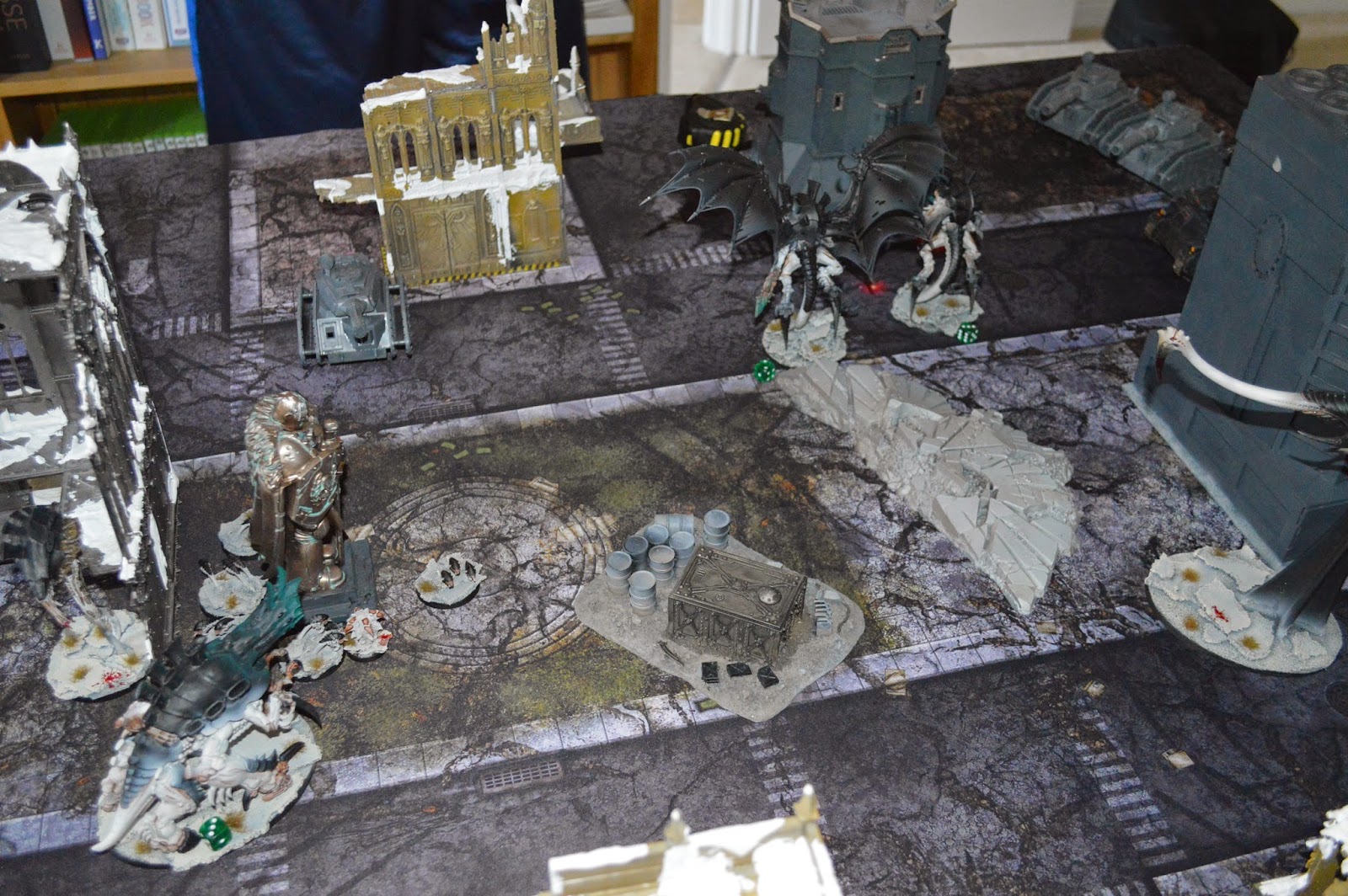 Matt does the honours and rolls for 6th Turn. He makes it, fires everything into the Ripper swarms but only kills another base. We call it there and have a gentlemanly handshake.

I really did not see the game going that way. Thinking back, I believe that the failed assault on the Dimachaeron was a pretty critical failure for the Knight in Turn 2. Also, the lack of ignores cover really saved my bugs’s( bugs’s?) asses!The Dima and Malan are such a beautiful couple. The Dima because: He’s so huge and so handsome, people just cannot help but feel threatened by him so they fire SO much dakka his way. Plus, It’s a fantastic centrepiece and an absolute bullet magnet. Also, if it gets the opportunity to claw something, I’ve no doubt that it will absolutely boss whatever IT may be. The Malan because: It gives everything shrouded, synapse, is T5 with 4 wounds and has regen. You know its amazing, I just like to remind myself. <3I’d like to also throw in a very special ‘Sorry, I didn’t forgot about you!’ tag for the LAN formation who where completely missed out during this game. literally, neither Warriors or Biovores did anything. Not a single shot was fired. but hey, what can you do against AV14 and no infantry to fire at, eh?Regardless of the LAN, I’m super stoked with my Nids right now. out of the last few armies that I have collected since I got back into the hobby, ( Necrons, Tau, Marines and now Nids- in that order) they are by far the most challenging and FUN army to play with. Like seriously fun, they are so involved, its rad.Anyhows, I hope you enjoyed the game and had fun reading about it. More chatter to come in the following few days. Until next time dudes, arrivederci x

Twenty twee, based in the South West of the UK and Do-er of 40kBrawl!
View all posts by Simon →