Hey everyone, we’ve got a really awesome announcement to share with the community! 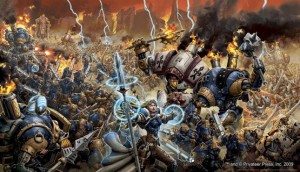 Frontline Gaming has always been an amazing resource for all things Warhammer 40k. With a fantastic painting service, pro level tactics/strategy, and hundreds of other excellent resources, within this domain name is, in my opinion, the best website for your futuristic grim dark dollar. Today, however, is a day where we add a new chapter to the saga of this historic tome. Warmachine and Hordes has been taking over competitive miniature games for more than 10 years and it is now taking over Frontline Gaming! Maybe that was a bit ambitious and certainly false, but today does mark the first ever Warmachine Wednesday on FLG* brought to you by your new steampunk strategic captain, Jason Flanzer. We are kicking off what will be an epic adventure and now, starting today, promising at least one piece of Warmachine** content every weekday. Don’t know what Warmachine is? Who the hell is Jason Flanzer and why should I listen to him? What will the Warmachine content even be like on this site? If these are the kind of questions rolling around in your head right now that is completely understandable, but not something that will last for long. So strap yourself in for a bit of history to kick off what is sure to be one hell of a ride.

Although it is known by many, Warmachine is a tabletop war game based in a skirmish environment. I say that due to the unique activation order that is very similar to that found in small skirmish games, even though the game has progressed to have quite a large model count and be considered by many to be a “full on war game”. With 12 armies to choose from, the overarching game system has much to offer traditional war gamers, as well as a cutthroat aggressive nature sure to get any player who loves getting into the thick of things excited. With each turn, players have the option of manipulating the army of a powerful warcaster or warlock and using engines of war called Warjacks or powerful monsters called Warbeasts to rend the battlefield and claim victory. Using the resources of the warcaster or warlock carefully, you must fight to destroy the opposing warcaster or warlock, while playing a centrally focused scenario based on controlling large objectives or areas of the map. With an unprecedented casual and competitive scene pushed diligently by the games creator, Privateer Press, you will find there are endless ways to share and enjoy this game as players develop in areas such as skill and game theory. 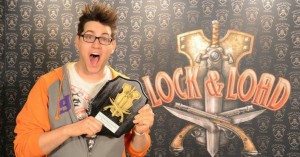 Now that we have an understanding of what we are talking about, who are we even listening to about it? A valid question and one you should certainly ask when perusing the depths of the internet looking for information on your favorite things. My name is Jason Flanzer, also known as JBFlanz, and I have played a lot of Warmachine. While that is a claim I am sure many can make, and certainly many will, it is the experiences that I am sure will separate me from the rest of the pack. Starting just like you, I picked up my first starter box and was hooked! As I amassed tons of games under my belt, I had the desire to test myself and started  traveling to many conventions. I immediately won my first two events I played in at a large convention and later that summer took second in the, at the time, world’s largest Warmachine event at Gencon in Indianapolis. I suppose all the work had panned out and of course I craved more, and over the years I have placed in the top two at every major venue (at least once) in the world that I have attended except Templecon. I was even blessed enough to captain the World Team Championship USA Team to a wonderful, nail biting second place finish last year. In addition to lots of events, I was part of the incredible Iron Agenda Podcast for many years and have worked with numerous other podcasts as a guest host and have continued doing that even today. I hope to put all of these experiences, events, and media knowledge into the work I do here at FLG and hope to hear from everyone along the way to help improve the content and develop the community.

The one thing about war gaming, and life, is everyone always has something to say. Furthermore, even if they are qualified to give you any sort of advice it often can be delivered in a way that is just not helpful. Here on FLG, the Warmachine content WILL be useful, credible, and it will come for players of every level. Just bought a starter? We will be working the new player angle often and share our favorite resources and tips to get you to become the type of player you want to be! Want to have a shot at winning your next convention? We will also be working in the world of high level competitive play and bringing on many of the world’s best to help out. Picky on how you like to receive media and information? We will be working our hardest to diversify the information given out here to suit the needs of the many. Whether that is articles, podcasts, videos, livestreams, or round table discussions we will be up to date with everything Warmachine and be your one stop shop for the hobby you love.

So…are you ready to jump at it? Then get ready to pull out your full metal fantasy and smash your opponent in the metaphorical mouth. Let’s pull out the FAT Mats***, smack glue on your final models, and get your Warmachine game on because we have tons to cover and, as you can see, it is just getting started. Look for your daily tidbit posted here and make sure to slap FLG on your toolbar because each day is only going to get better. See you on the tables.

*FLG = Frontline Gaming…no need to write it out every time, right?

**Most times the word Warmachine is used it is referencing both Warmachine and Hordes. There will be time when we look to call out the Warmachine armies specifically, but when I speak of the game system as a whole, I mean to represent both.

***Yes you need one of these to play, trust me.

Posted on September 24, 2014 by Jason in Editorial, Warmachine

Leave a Reply to anvilward88