As always, we ask our community for feedback on how we did at our event and what, if any, changes they want to see going forward!

So we sent the poll out to all registered players that attended the event, but got a smaller return on it than usual, but a number of folks reported that they didn’t get it in their email, which would account for the lower sample group. However, we still got a 36% response rate which is pretty solid.

Also, please note the actual questions and responses were longer on the poll than shown here as I trimmed them down to avoid having too much text on the actual graphs.

First and most important: did you enjoy yourself at the BAO? 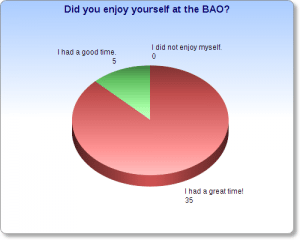 Well, that was a resounding yes. Nice!

Next up, how did folks like the new venue? 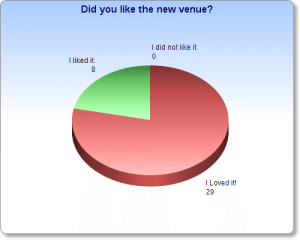 How did players like the blended Maelstrom and Eternal War missions? 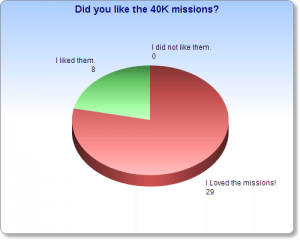 Again, not a single overtly negative response, nice! A large majority of voters said they loved the missions, which is excellent.

Did players enjoy having Lords of War at the BAO? 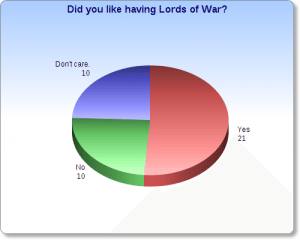 That is a pretty resounding yes vote on Lords of War after their first appearance in a tournament, winning out with a slim majority, but, a majority none the less. Also, the hard nos were less than 25% which is still a sizable chunk of people, but they are a minority of voters. 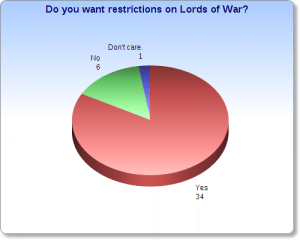 Well, that was a strong answer, wasn’t it? It seems most folks do want Lords of War, but not ALL of them. So, we will keep our restricted list but are open to adding units to the list as we go and learn the ins and outs of them better.

This next question was about army composition and what folks wanted to see going forward. Essentially we asked if folks wanted to stick with what we were doing, or allow for more freedom in list building. 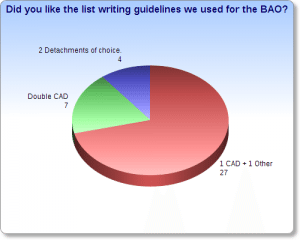 It seems that we struck the right chord with the voters as they voted a big yes to continue as we have been doing things with essentially 1 CAD type detachment + 1 other of their choice. Now, that said, as more books come out with army specific detachments that clearly function like a CAD, we will probably alter how we define our guidelines to reflect this.

Were games finishing on time? Time is always a constraint at tournament and players are always concerned about it. How many games were finishing? 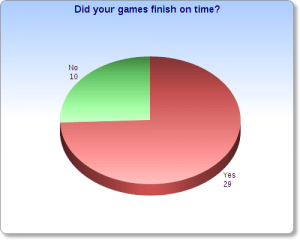 A big chunk of gamers were saying that their games did in fact finish on time, which is good. Going up to 1850pts makes games take longer, but, the 2hr45mn time limit seems to be working. We are always talking about chess clocks, too. We need to try it in practice to get a feel for it as that should settle the issue.

We always throw in a question just for fun on these to remind everyone that while we all take it seriously, it is just a game that we play for fun and to hang out with our friends! 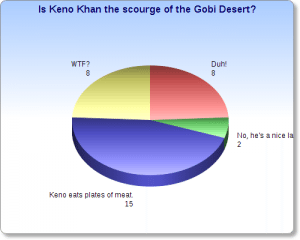 This question–and the answers–will make sense to anyone that listens to the podcast!

In all, this is great feedback and really helps us to make informed decisions going forward. It shows us that we are on the right track with our format and that folks are enjoying it and having fun. That is the goal! With our 4th BAO behind us we are now turning out attention to the second annual LVO!

Thanks to everyone that came, helped, had fun, and made the BAO a success!