Heres a small game where I test out my Nid FMC Spam list ( cut down for 1250) vs a high AV list including two Forgeworld Sicarans and Knight Cerastus. 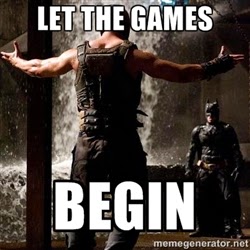 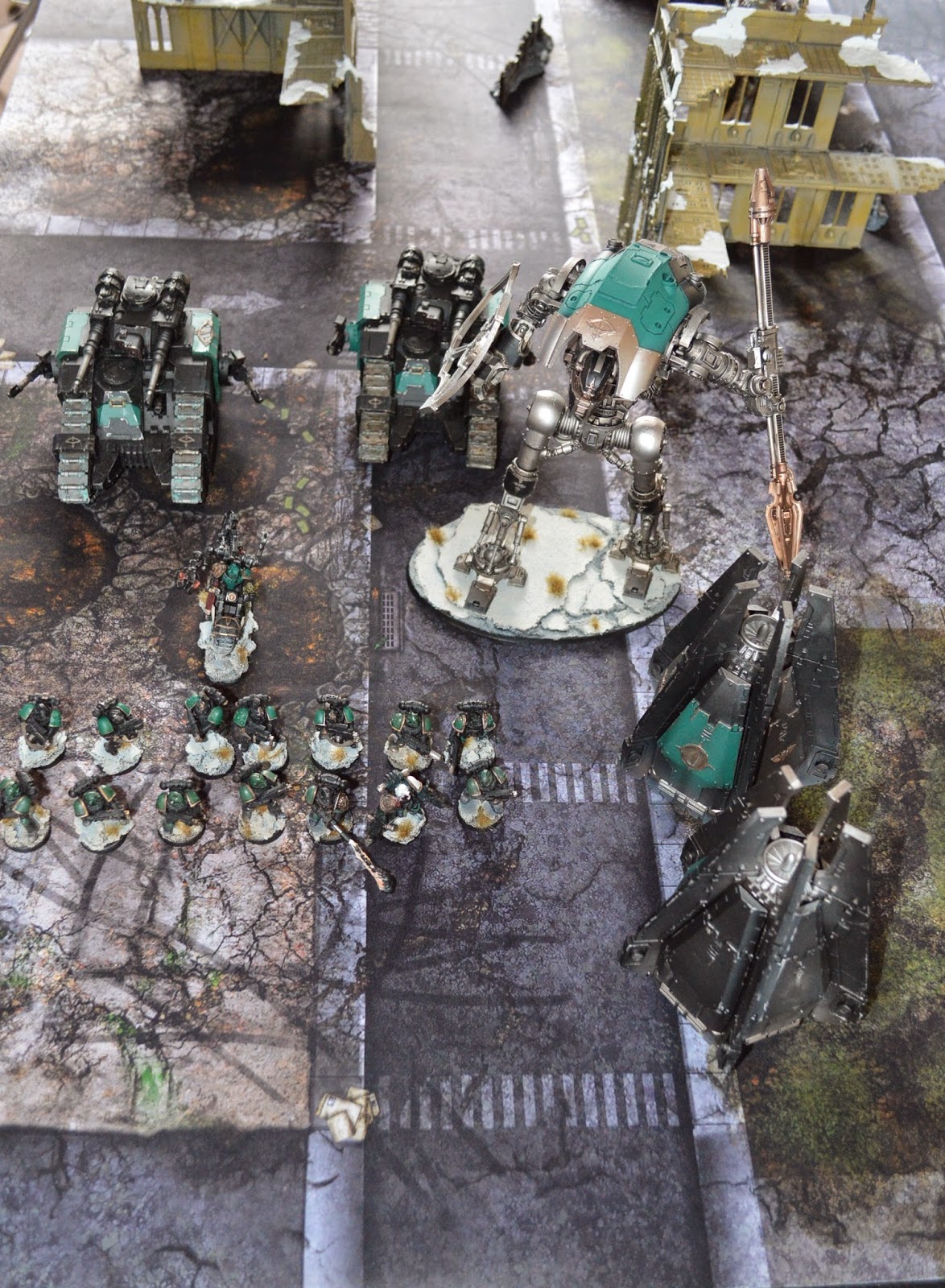 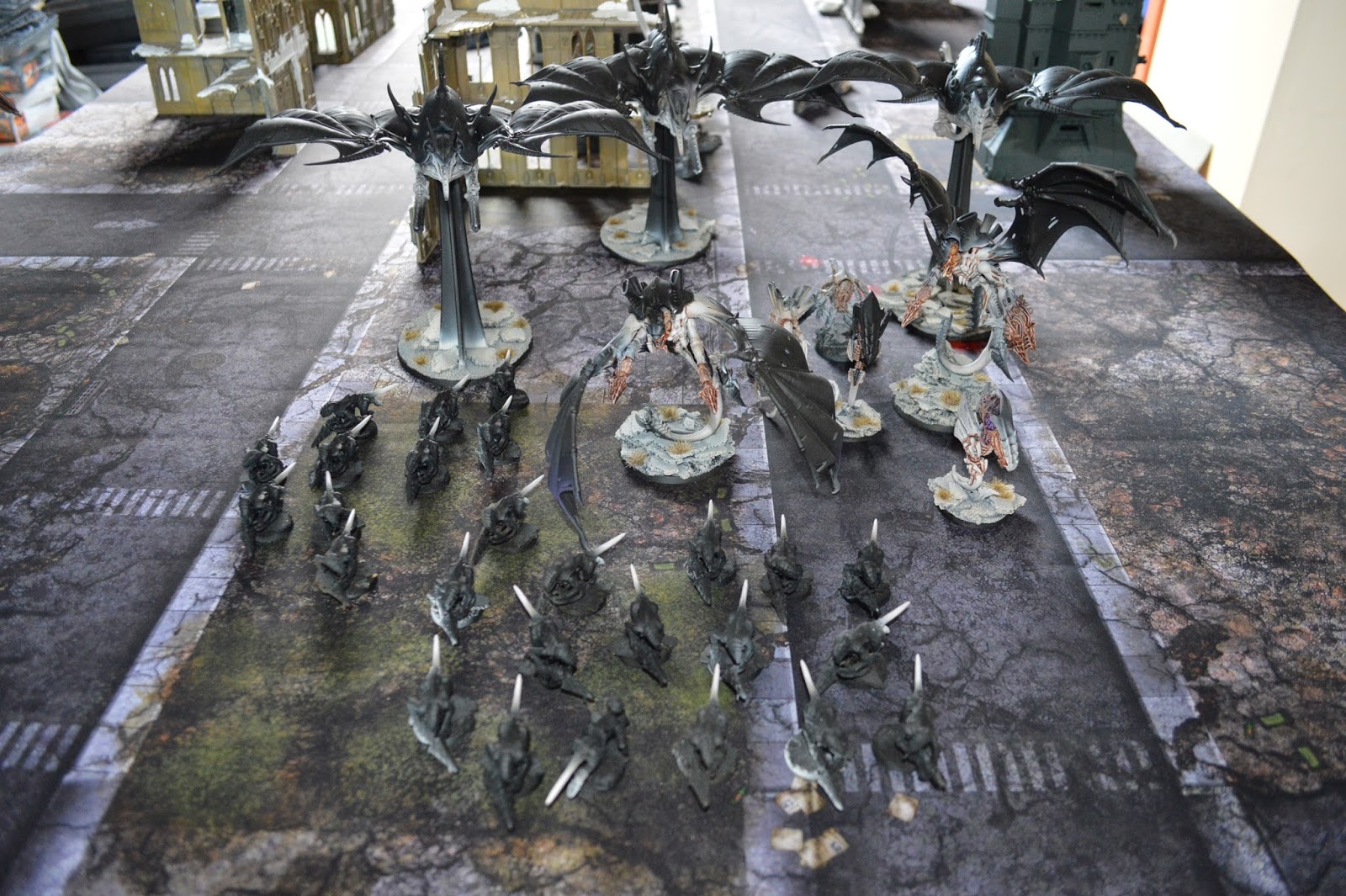 Check out Frontline Gaming and Tablewar Gaming’s awesome range of gaming mats like the one above over @ https://www.frontlinegaming.org
The Lists: 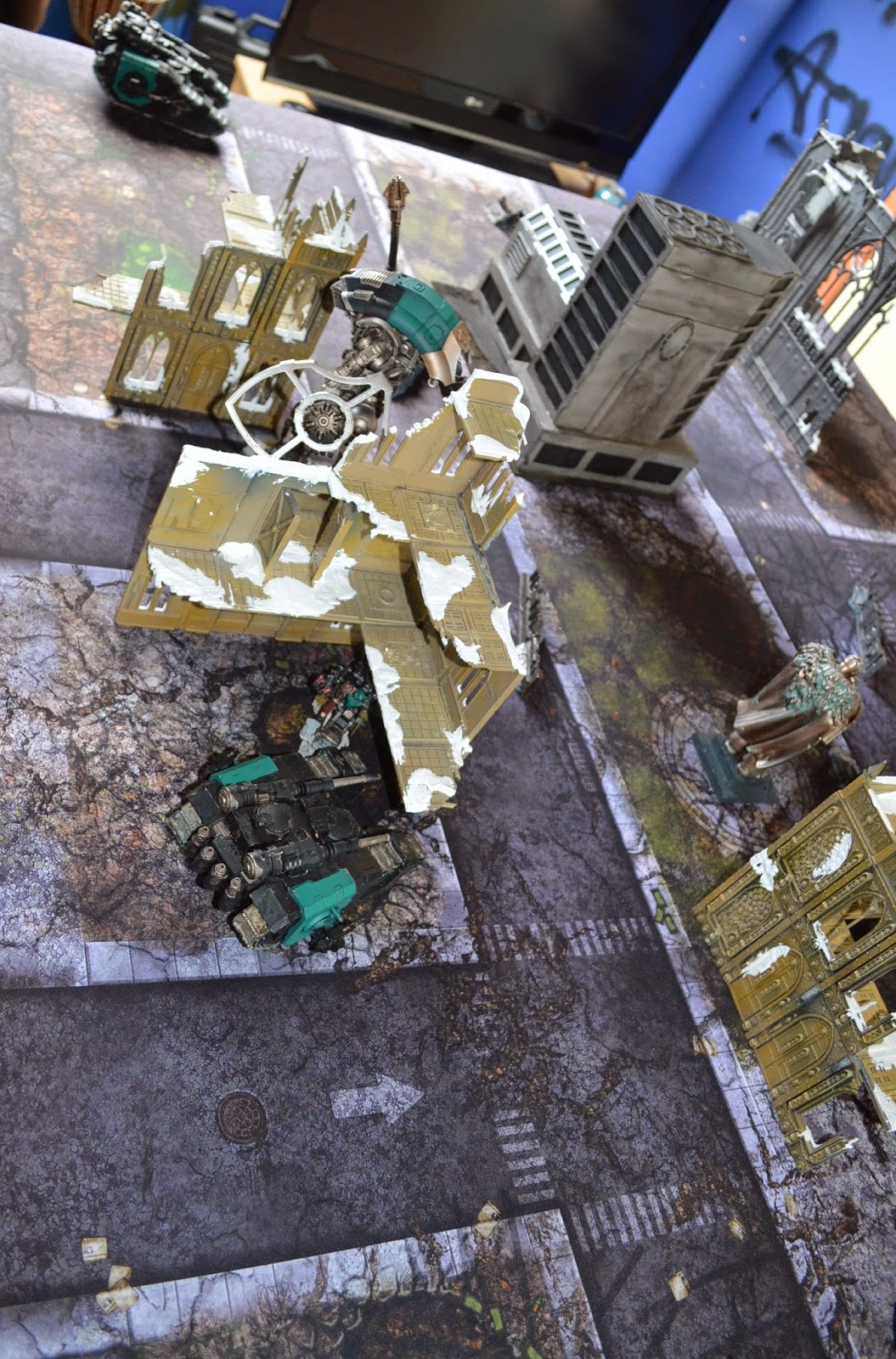 Tyranids counter deploy by crowding into the ruin on the right hand corner of the table, bubble wrapped by the shrouding given off from the venomthropes and stealth from the Conquerer of Cities Warlord trait for a 2+ Cover ( I know right?! Awesome!) 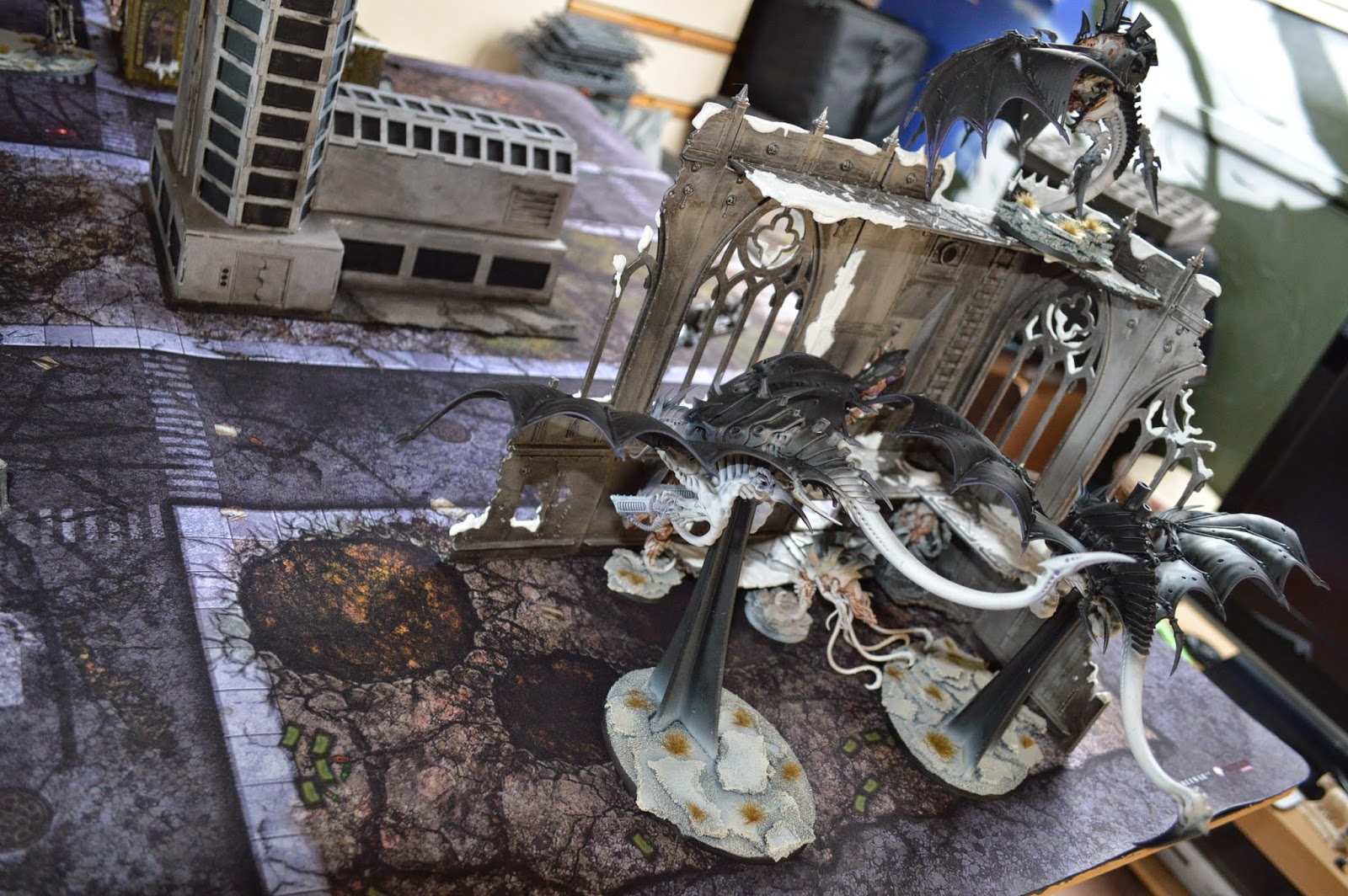 Tyranids attempt to sieve but fail on a very “average” 4. Darn bugs! 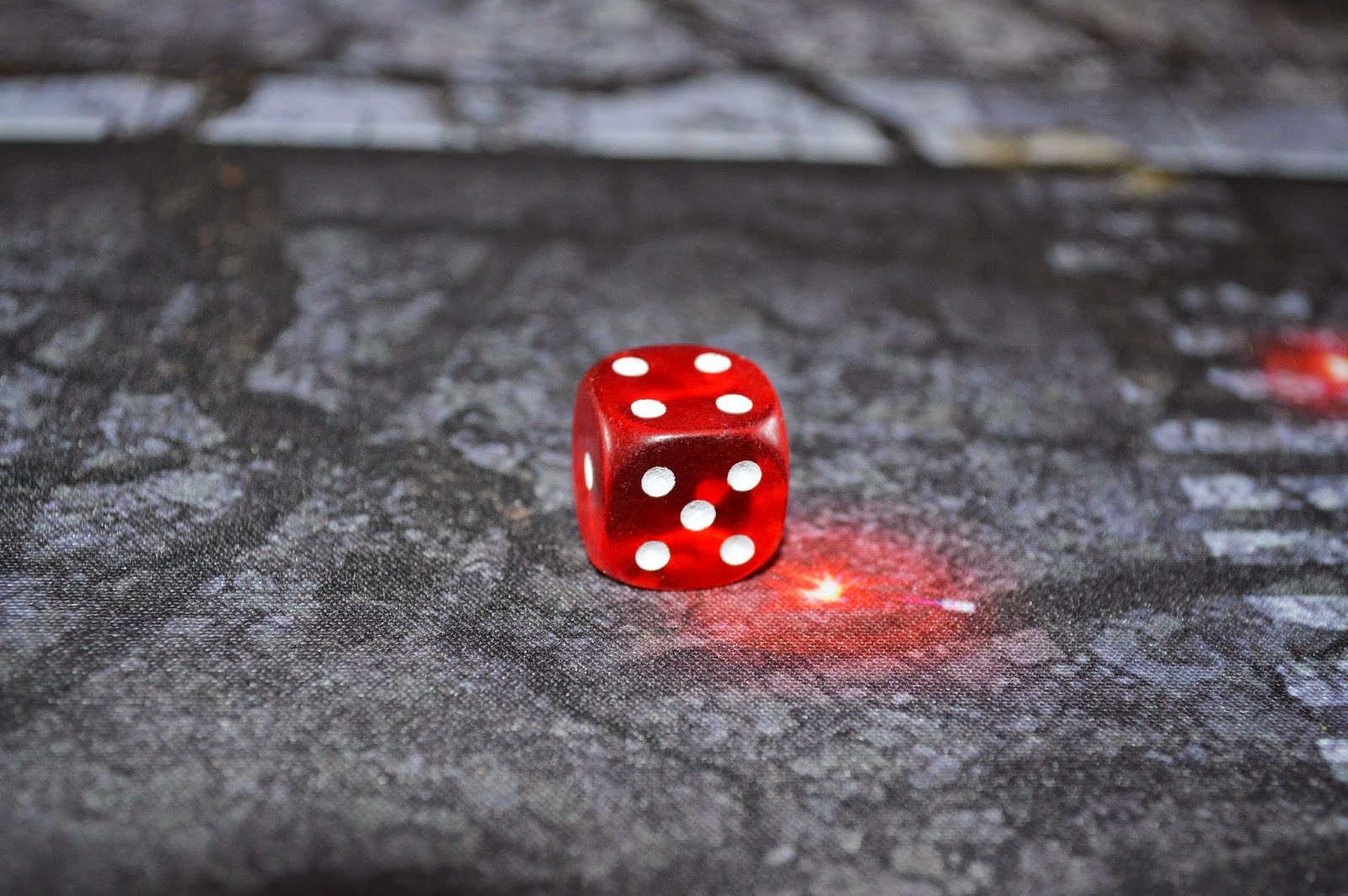 The (SoH perspective) right flank Sicaran and Knight advance up the board, point and click at the Hive crone cutting it down to 3 wounds.  The Sicaran on the left flank goes to shred the Hive Tyrant but fails to tickle him with his 2+ cover. 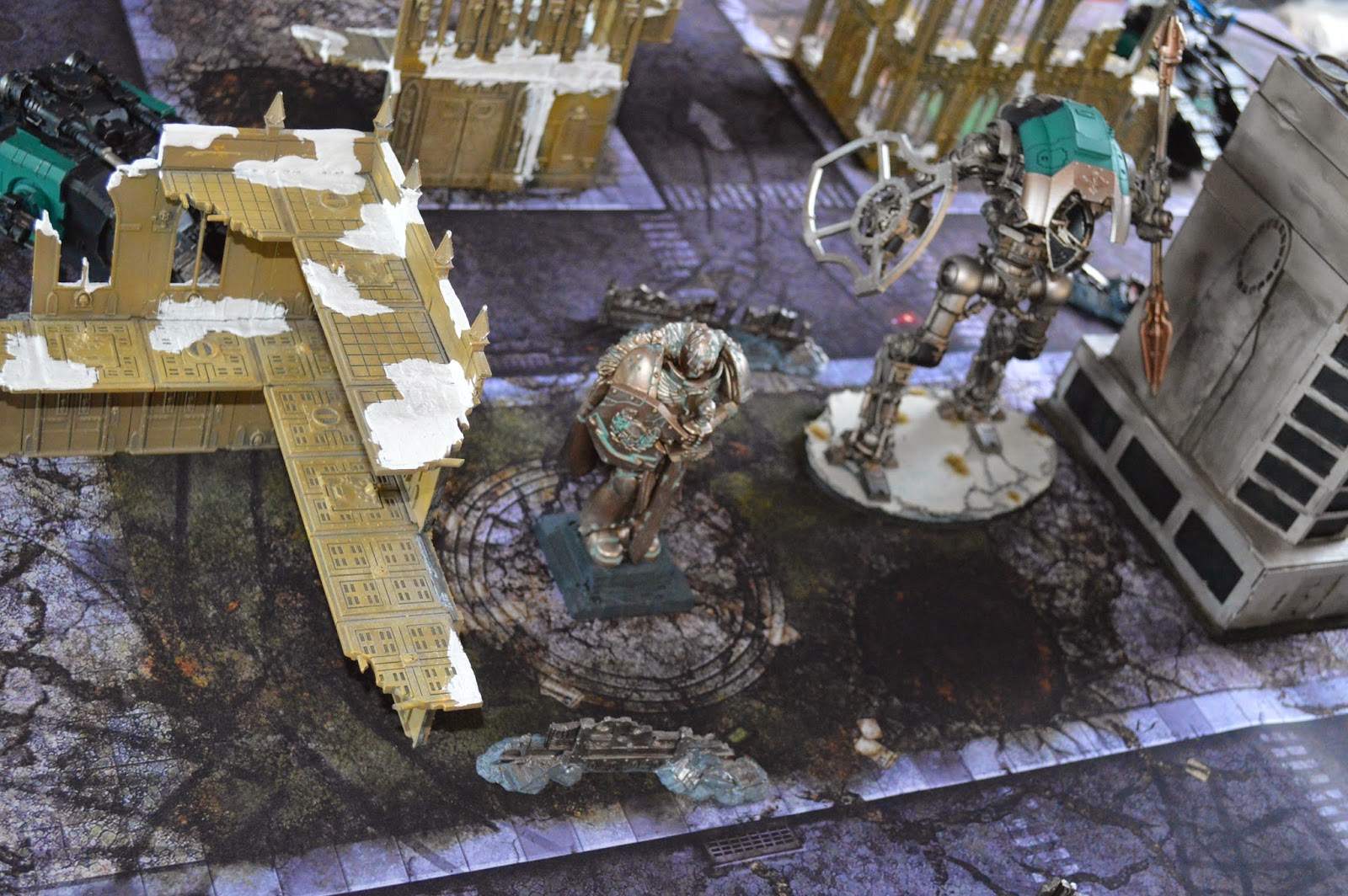 Drop pod Melta arrives to bring bolter hellfire upon the crone but wiffs and fails to harm it! 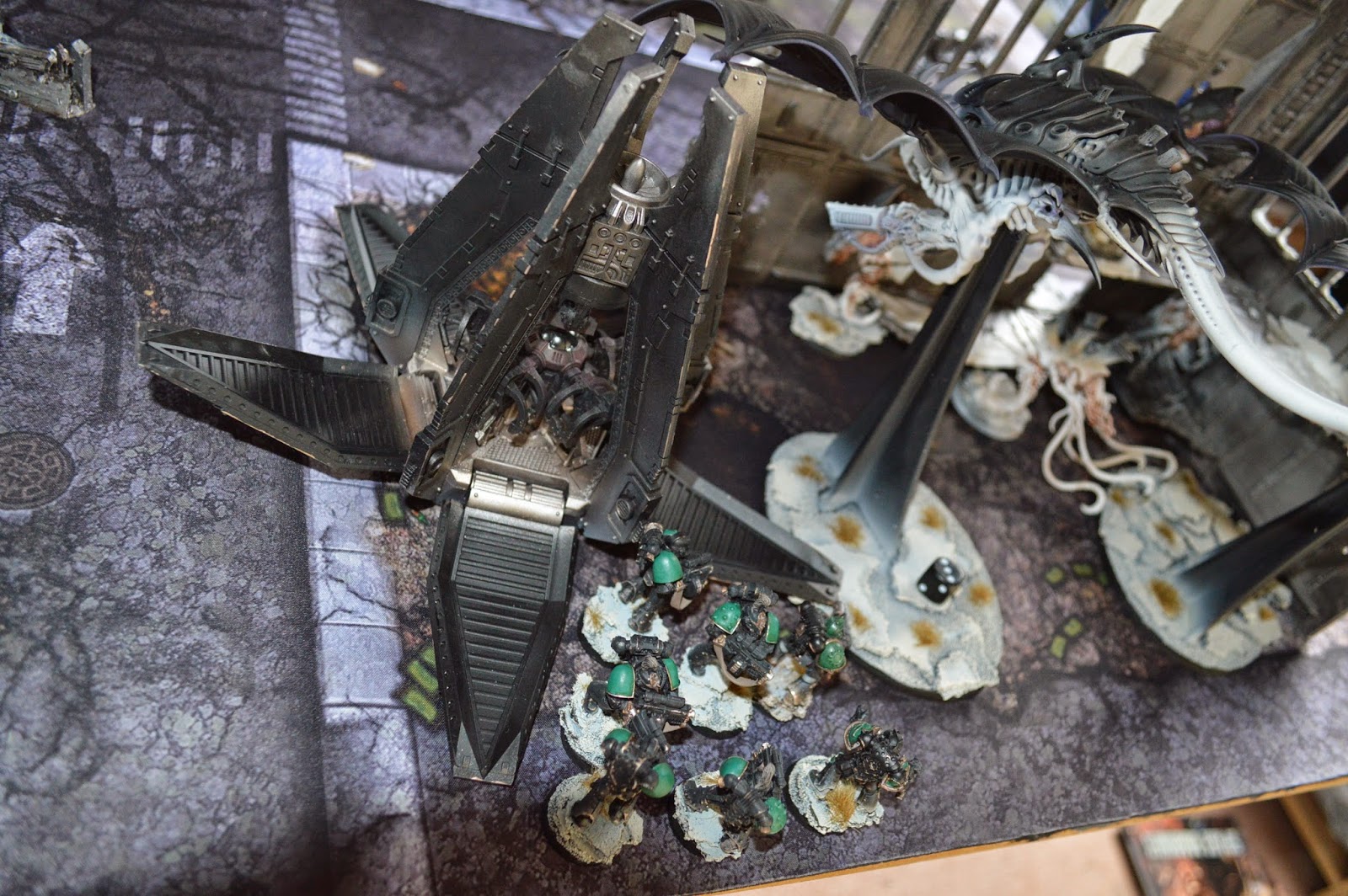 The Crones and Tyrants take flight and fly forward. The Zoanthrope perils whilst casting catalyst on the Hive Tyrant but only loses a single wound from the Perils table. The two Crones fire their Tentaclids and score two glancing hits on the Knight but it makes both of its ion shield saves. The Warlord savages the back of the Knight and tears off 3 Hull points from its undefended rear armour. The Ceramite is cracking!

The second Hive Tyrant alongside the Venomthropes assault the marines and murder 4 of them. They break and escape the assault, running towards the lanky knight for protection. 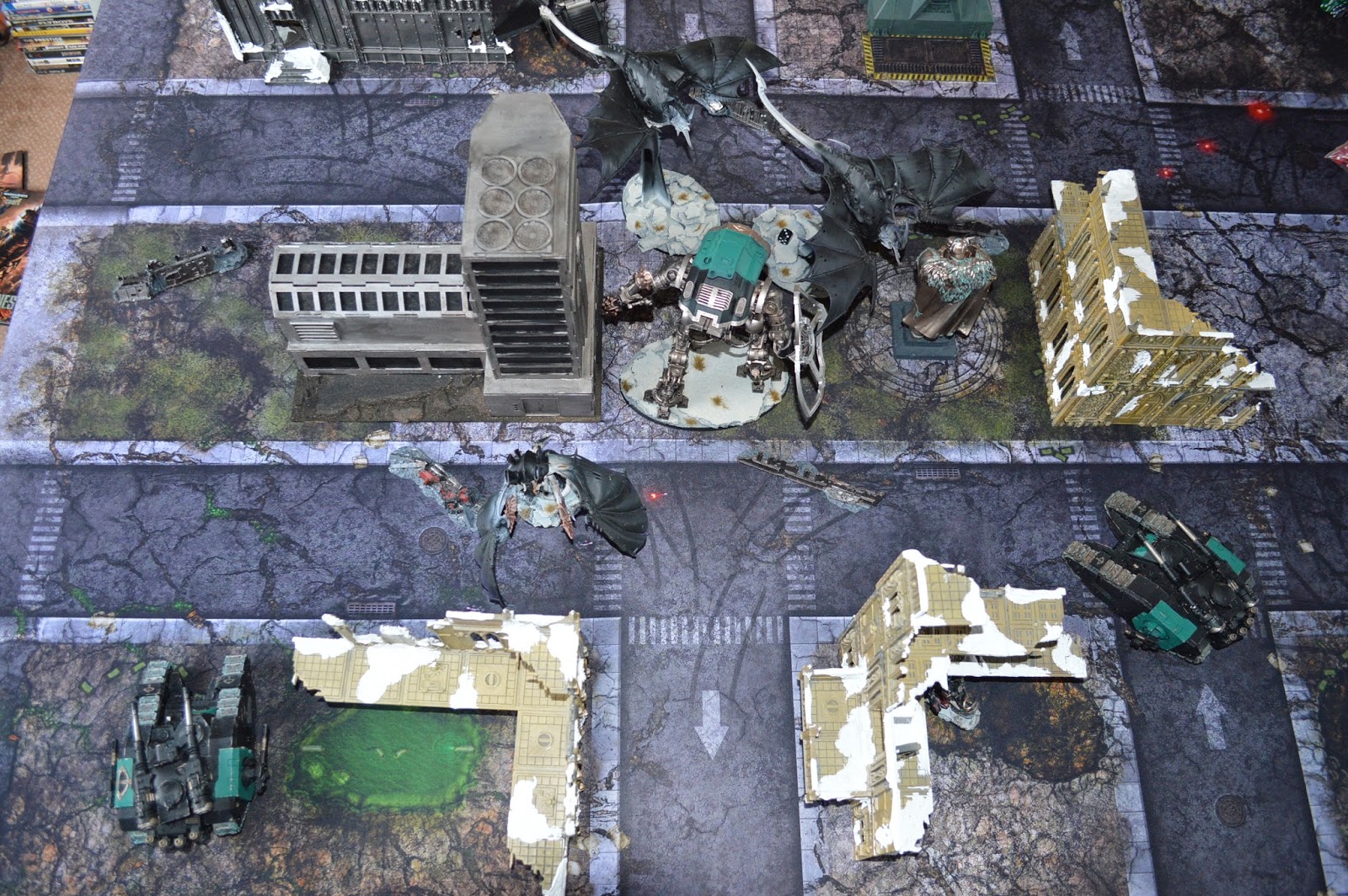 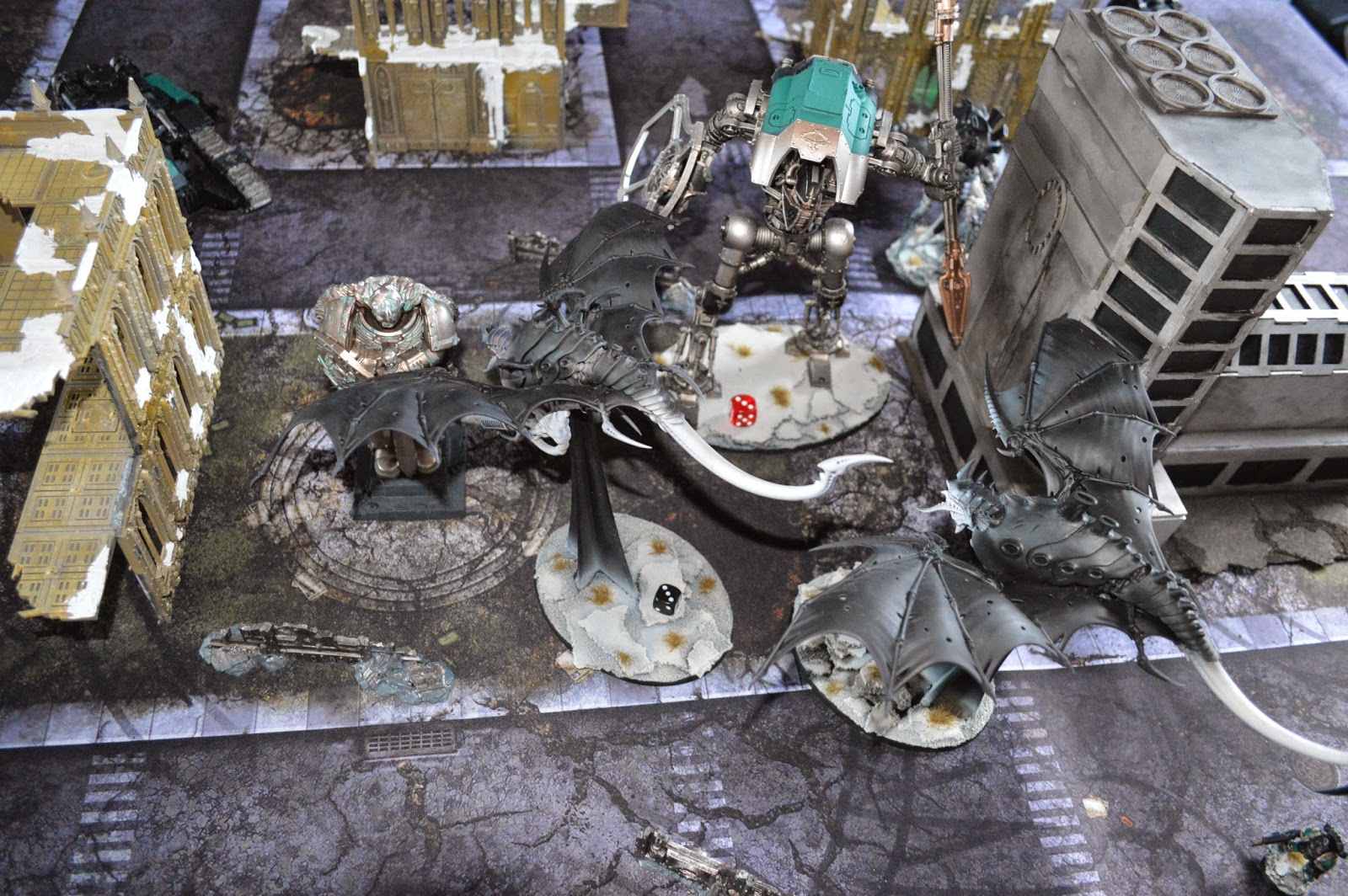 Drop pod reserves do not arrive which can be forgiven. The Sicarans surround the Hive Tyrant while the Cerastus has its eye on the hive of bugs in the right hand ruin as there are a LOT of kill points to tally up. However, thanks to the positioning of the hive crones it’s just not going to make it anywhere near CC this turn… The Sicarans absolutely shred the Hive Tyrant Warlord, inflicting 3 rending wounds and 2 armours saves – which it manages to save, leaving it limping on its last wound and passing its grounding check. RATS! The Cerastus manages to hit and wound the Crone leaving it burnt and bloody on 2 wounds but passes its grounding checks . The knight proceeds to  fail its IWND roll! It had better start stomping soon otherwise it is never going to earns it worth back in this game! The risk you take! 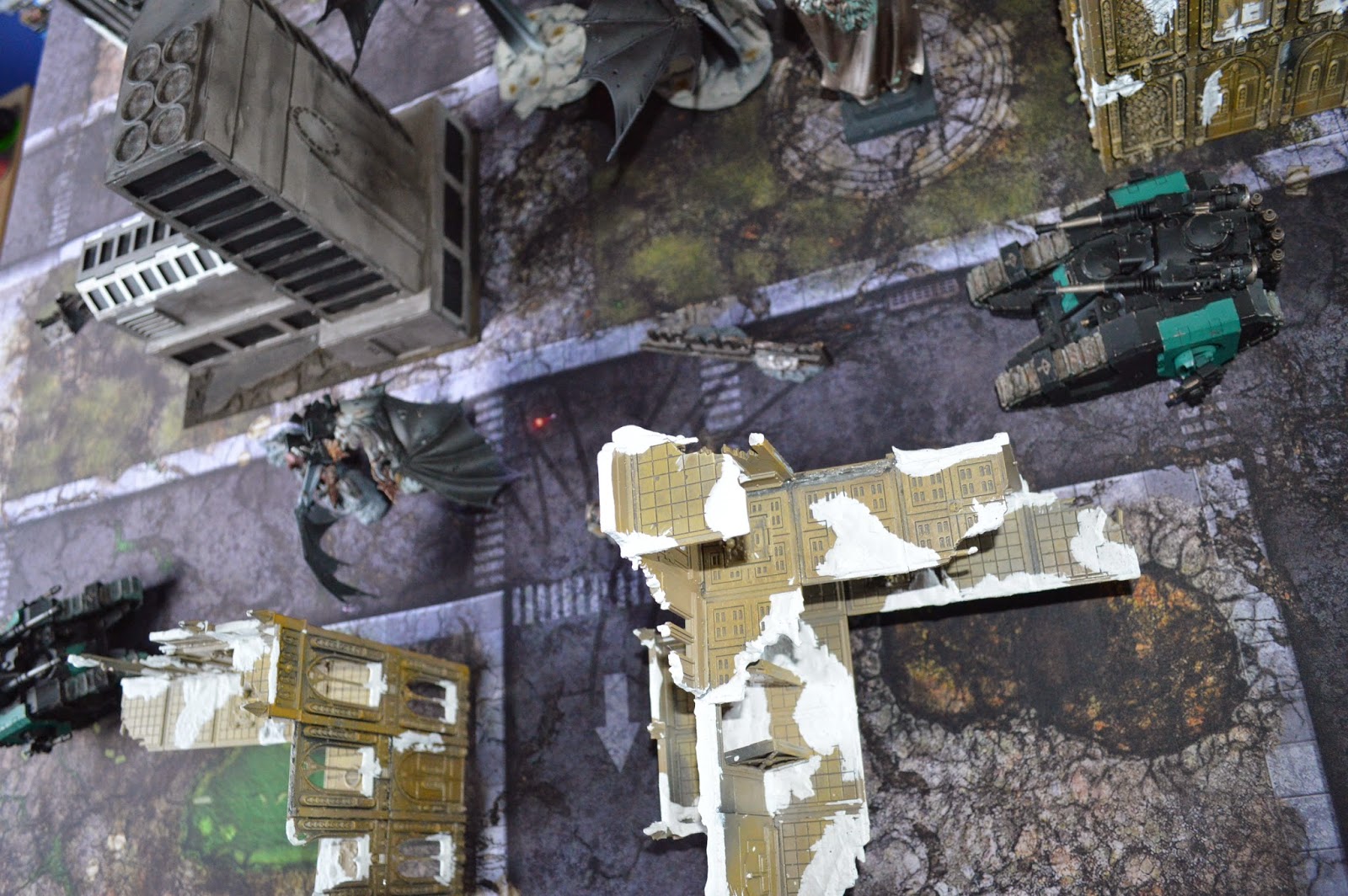 The 12 Termagants arrive whilst the Crone and other gants hang back in reserves . They go after the marines in the right hand corner. 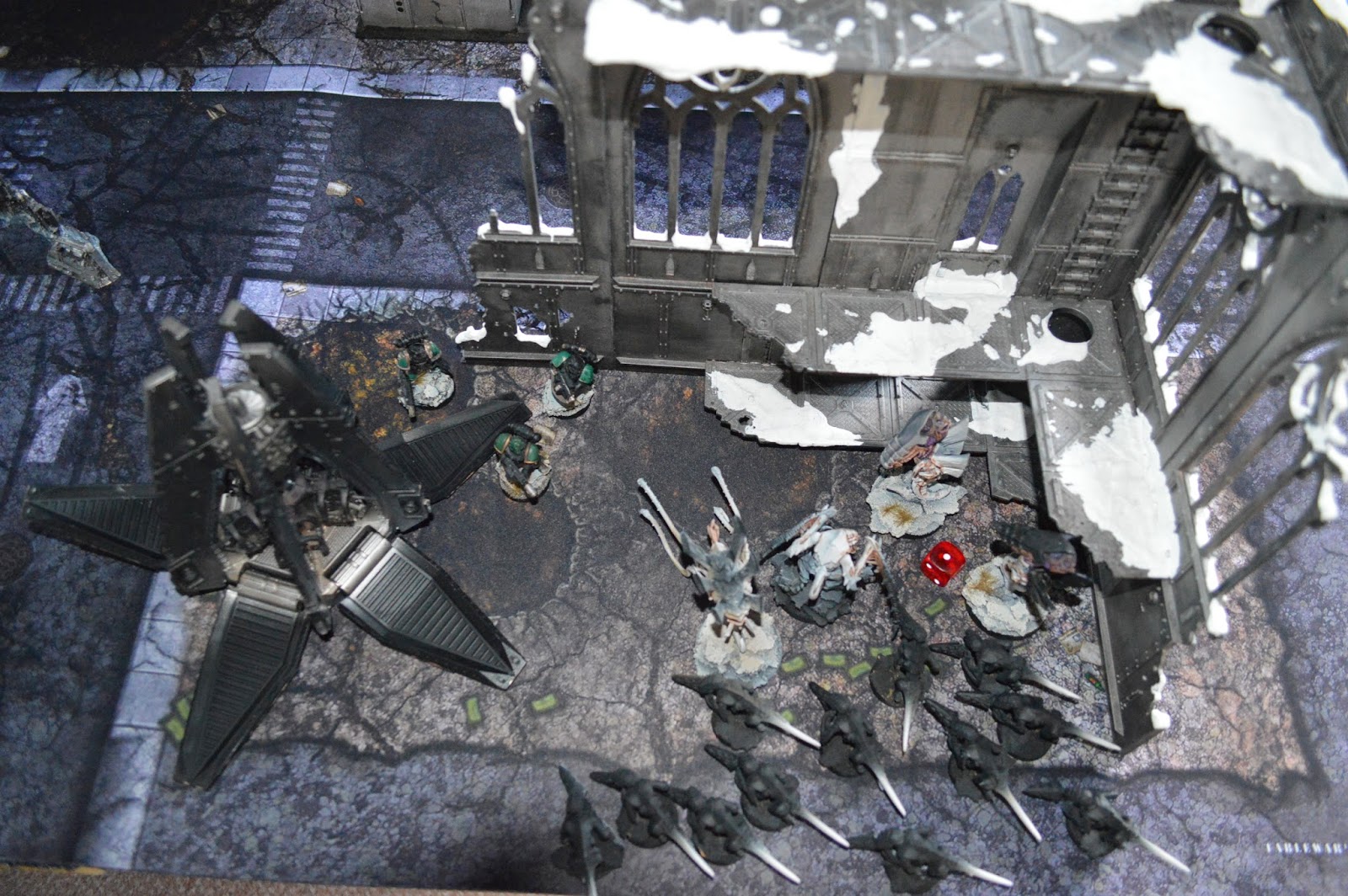 The Hive Tyrant Warlord goes for the rear armour of the Sicaran and KABLAMO!! 5, 6’s = One scrap metal heap! 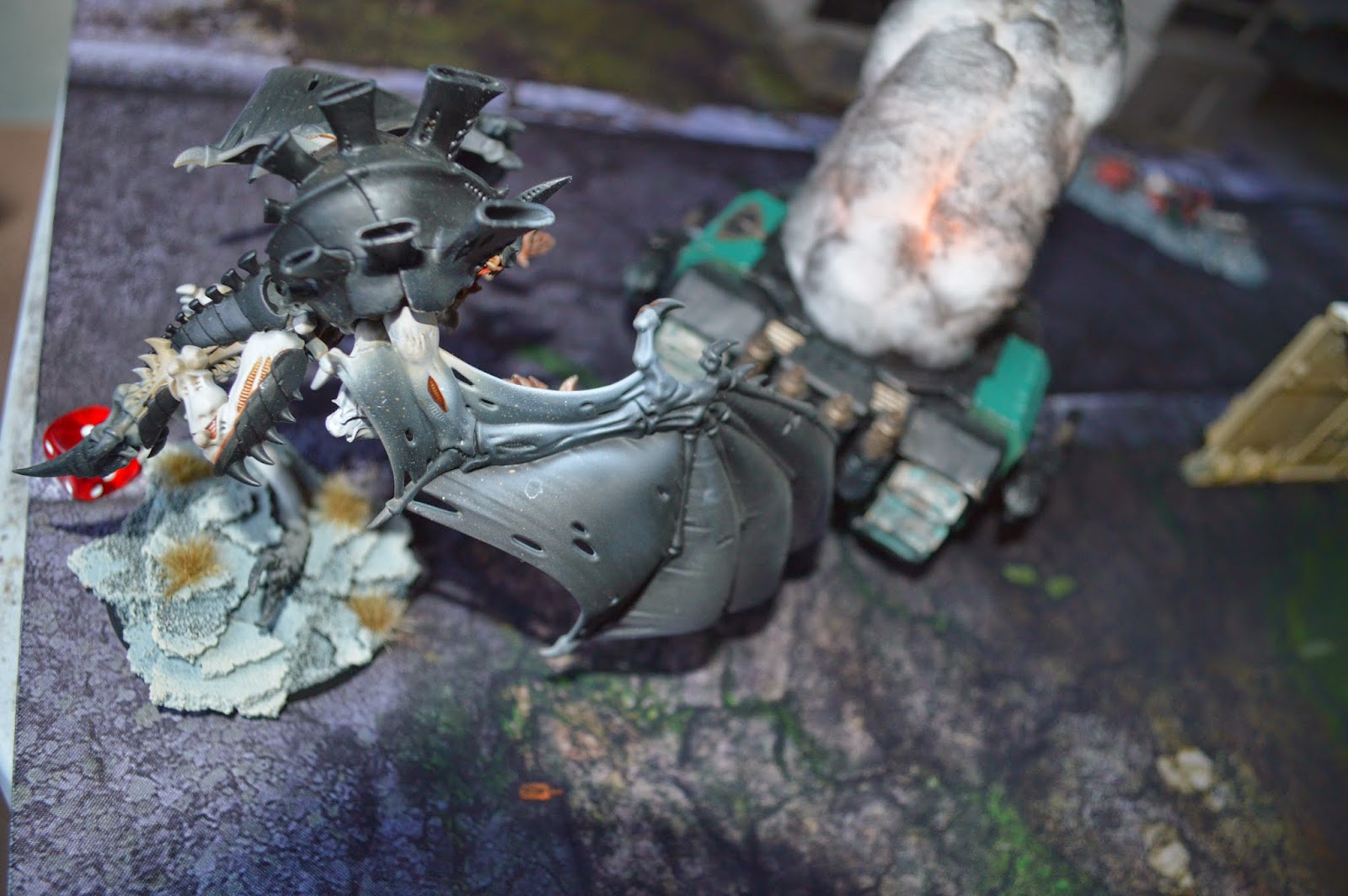 The other Hive Tyrant flaps over towards the Cerastus again but fails to get through it’s dang Ion shield.

Still the reserves do not arrive… A round of bolter fire and 2 scorching’s from the flamers could have scored an easy kill point against those termagants but never mind! Fight on! With the Left flank Sicaran down the other needs to start taking out threats ASAP. It homes in on the Hive crone and cuts it down to its final wound, it fails its grounding check but the S9 hit fails to wound! That is one lucky ( but sore!)  Hive Crone! The Cerastus marchers towards the Venoms, kills 1 with it’s shock lance but fails to assault! rolling only 5 when it needed 7! It then continues to fail its 2nd IWND role…Oh Cerastus, you suck today my man! 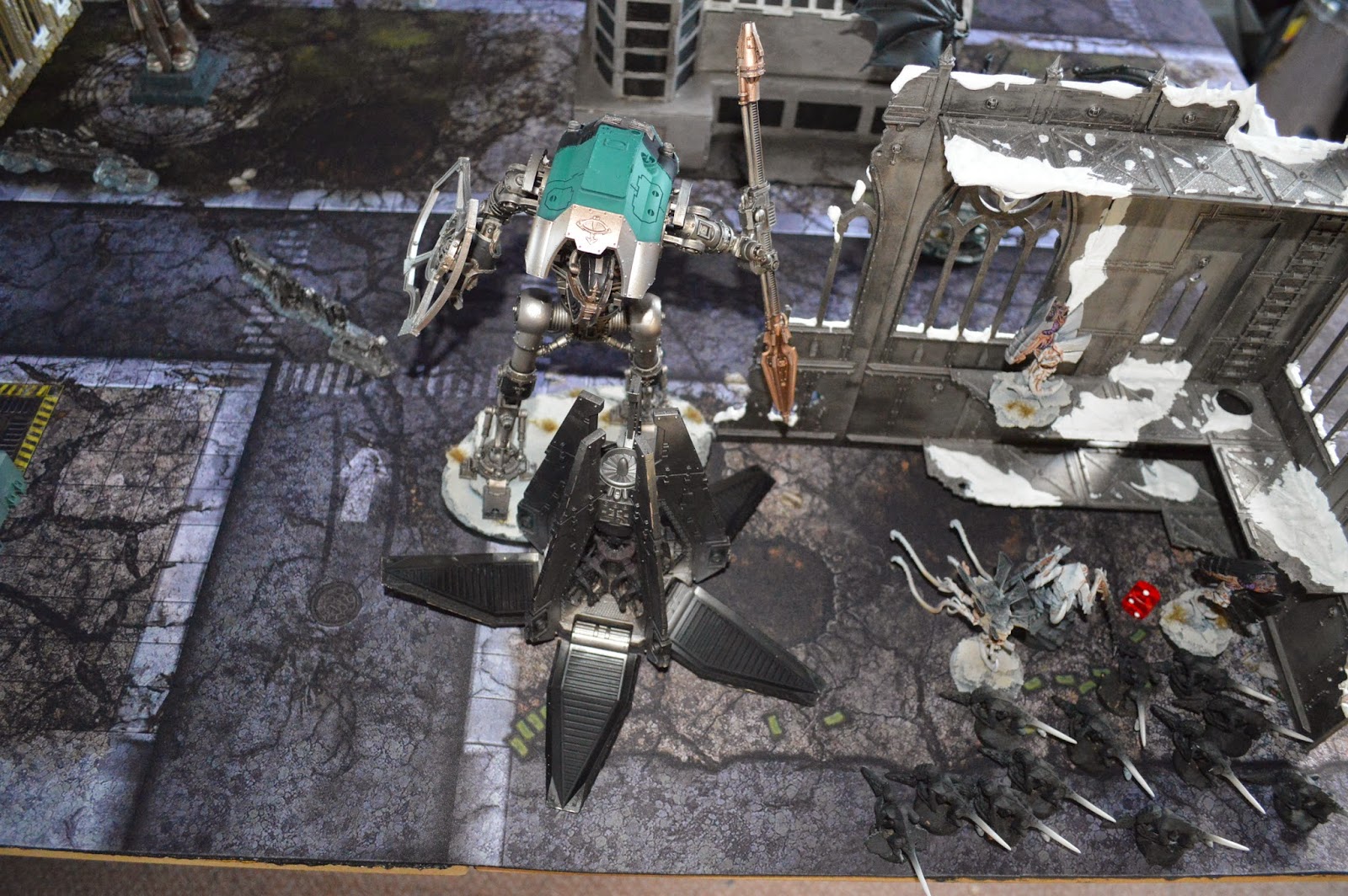 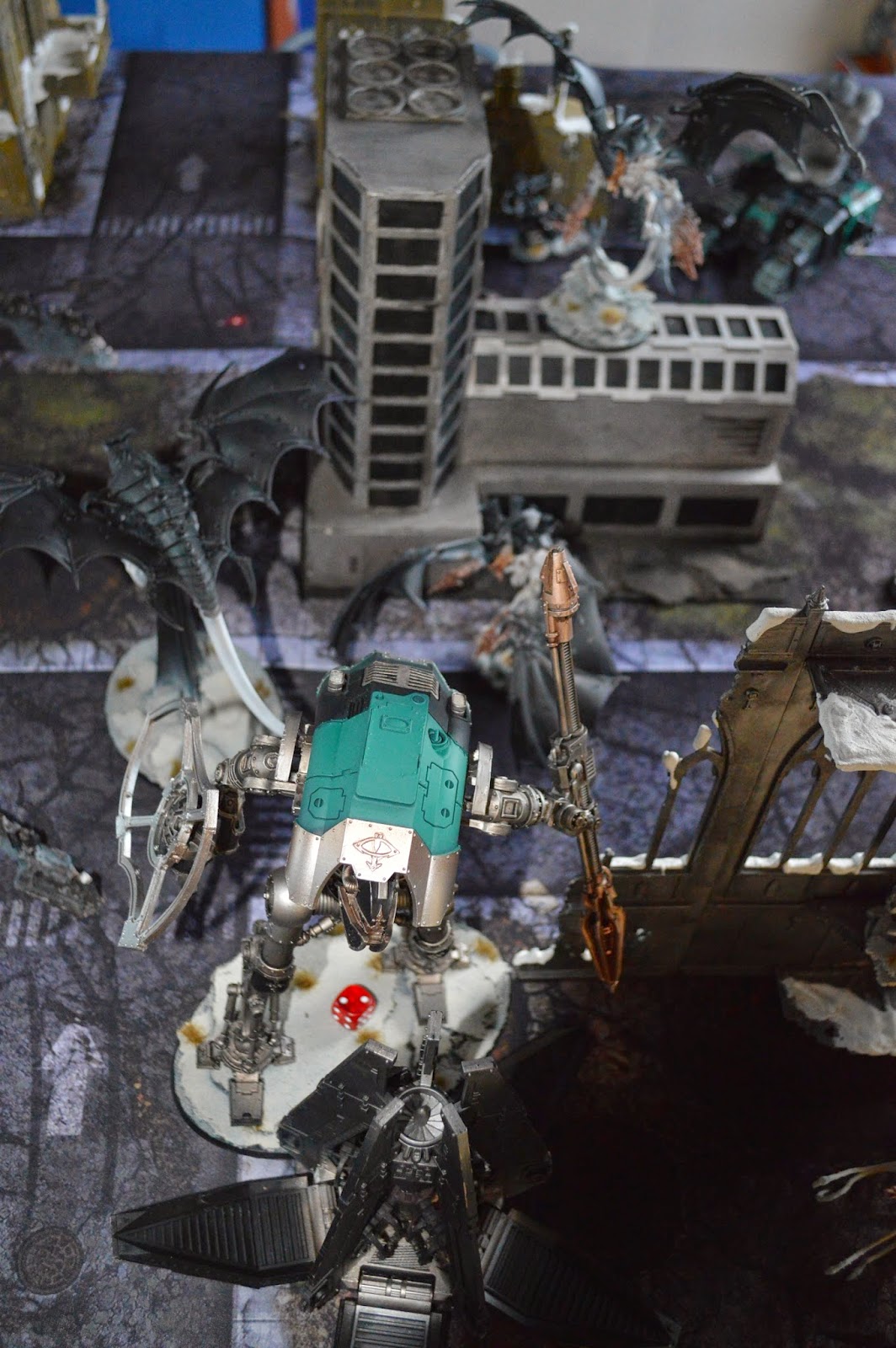 The Crone arrives while the Termagants stay back! Hoorah! It’s got it’s  beady little eyes on the prize and the prize is OH so big and shiny… (the Cerastus) The two other Crones leave the table while both Hive Tyrants go to finish their business with the Knight. The Psychic phase comes around and the Zoanthrope has the best day of its life. EVER. It suffers a perils on triple 6’s whilst casting Warp lance on the knight but successfully get’s it off. It rolls on the Peril’s table and scores a SUPERMAN’S 6! The God Emperor of Zoanthropes is born! He hits and pens the knight but sadly, it wasn’t meant to be as the knight passes it’s dang ion shield save again. The Two Hive Tyrants hit the unprotected rear armour of the knight and absolutely batter it. 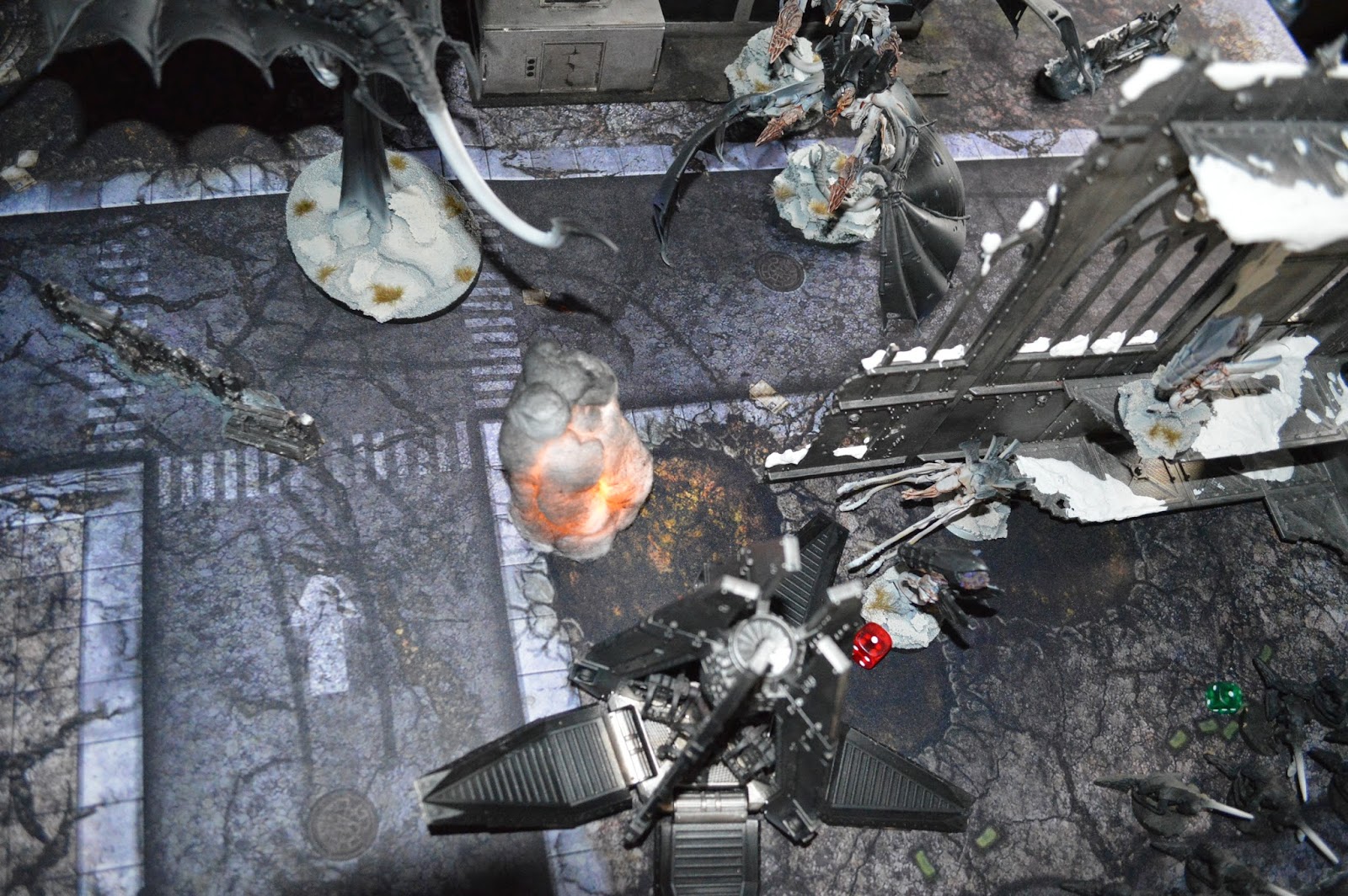 You know that sound of silence before the deafening wave of obliteration you hear when you’ve just been brutally exploded? No you don’t. But the knight does, or did. It Apocalyptically climax’s everywhere but thankfully only the God Emperor Zoanthrope is in range and passes it’s invulnerable. Cheeky.

The Sons are on their back foot now. With only the Master of the Forge, Sicaran and a few marines on the board left they need some serious luck or assistance from the Chaos gods. Thankfully reinforcements do arrive as it is turn 4 and they drop down right upon the Termagants and take them out with dual bug spray for an easy kill point. The Sicaran turns on the Hive Tyrant Warlord and strips it’s final wound ( + a few more!) scoring another point and Slay the Warlord! 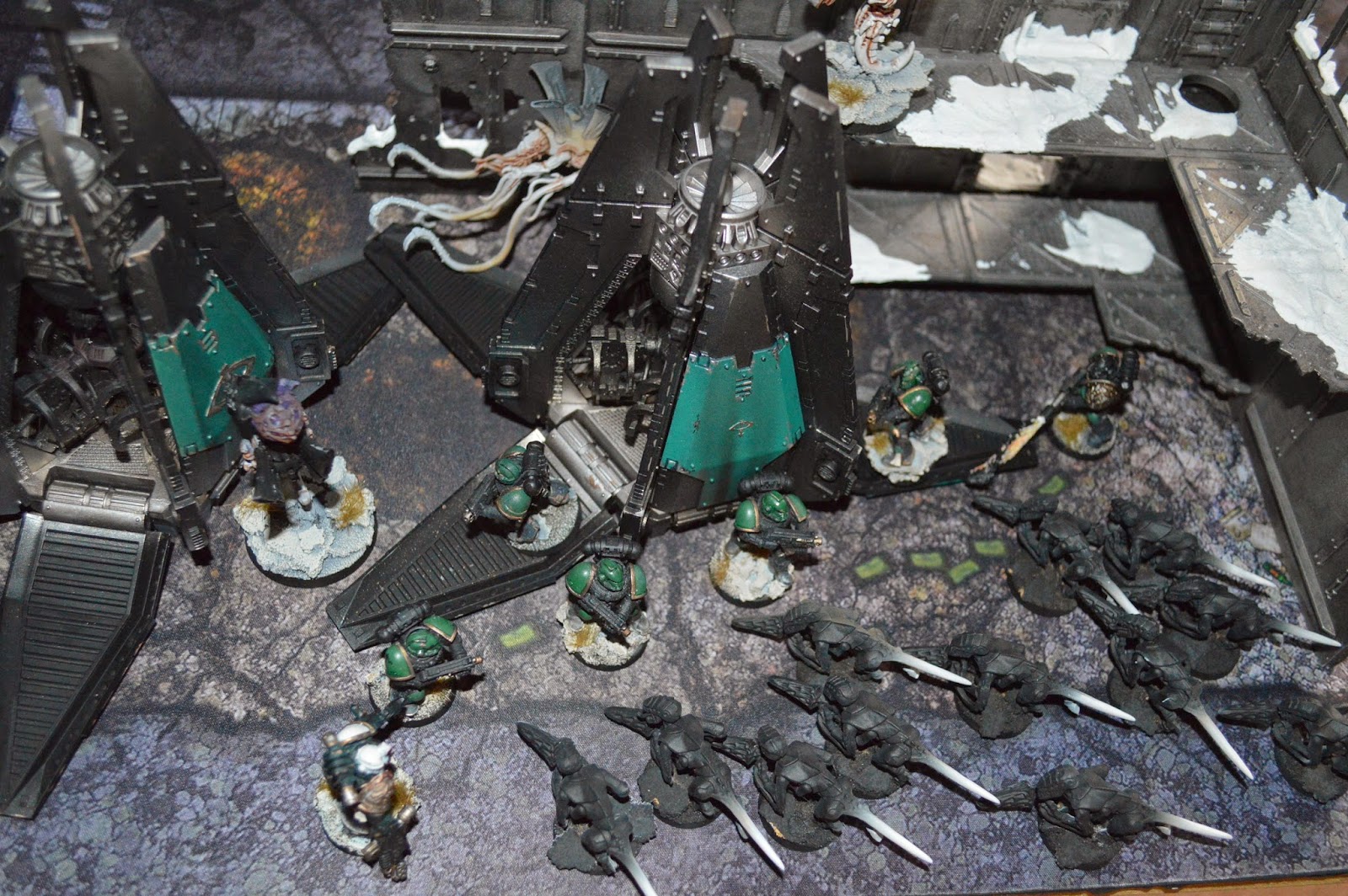 The Nid’s took a bit of a beating last turn  by losing the warlord but nothing to wave a white flag at. With the return of the two Crones and the arrival of the last 16 Termagants there is a strong sense of presence from the Xeno’s side.  The Crones Vector strikes the Sicaran and whips off one HP while the the Termagants sweep towards the remaining marines. 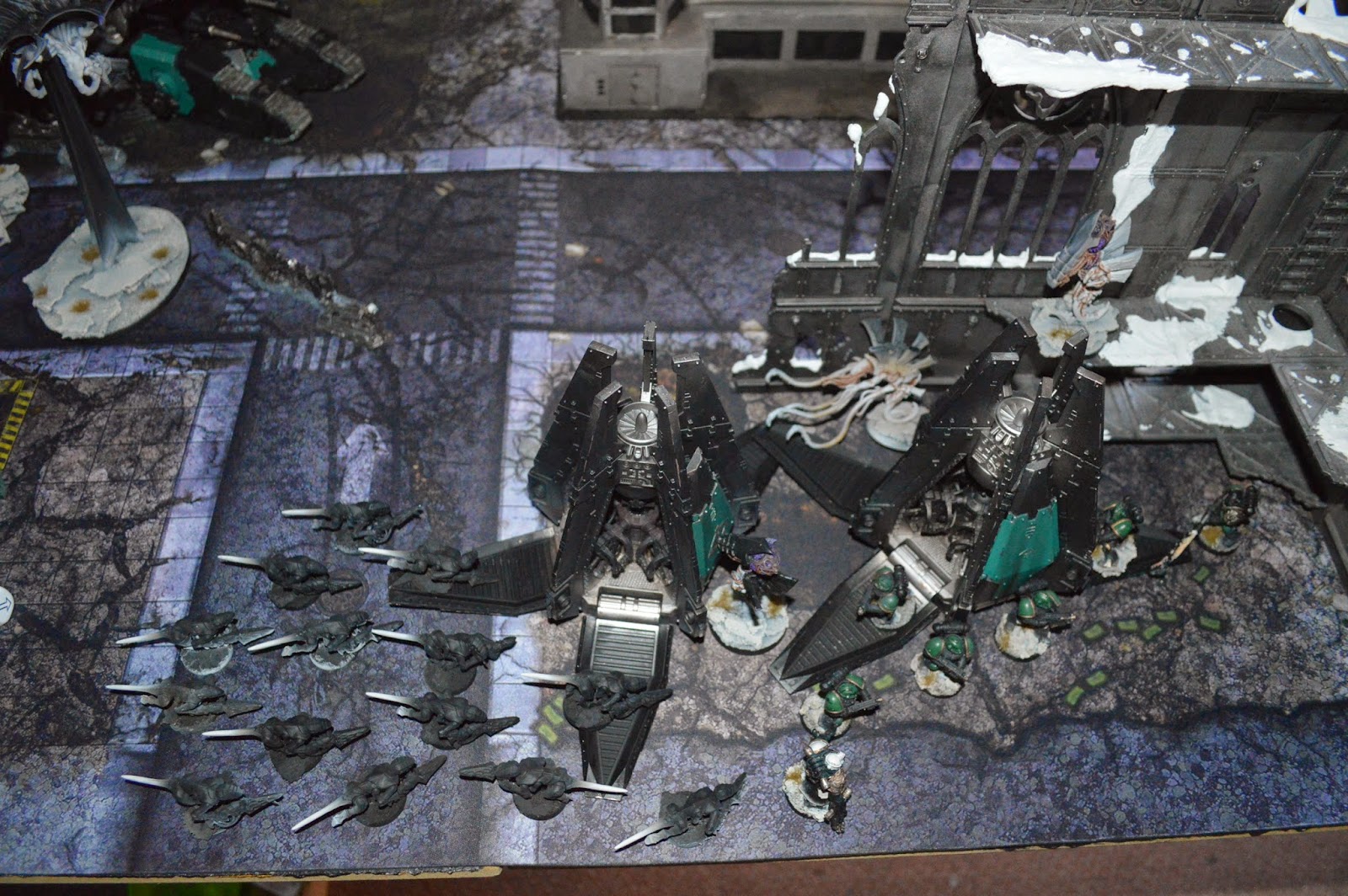 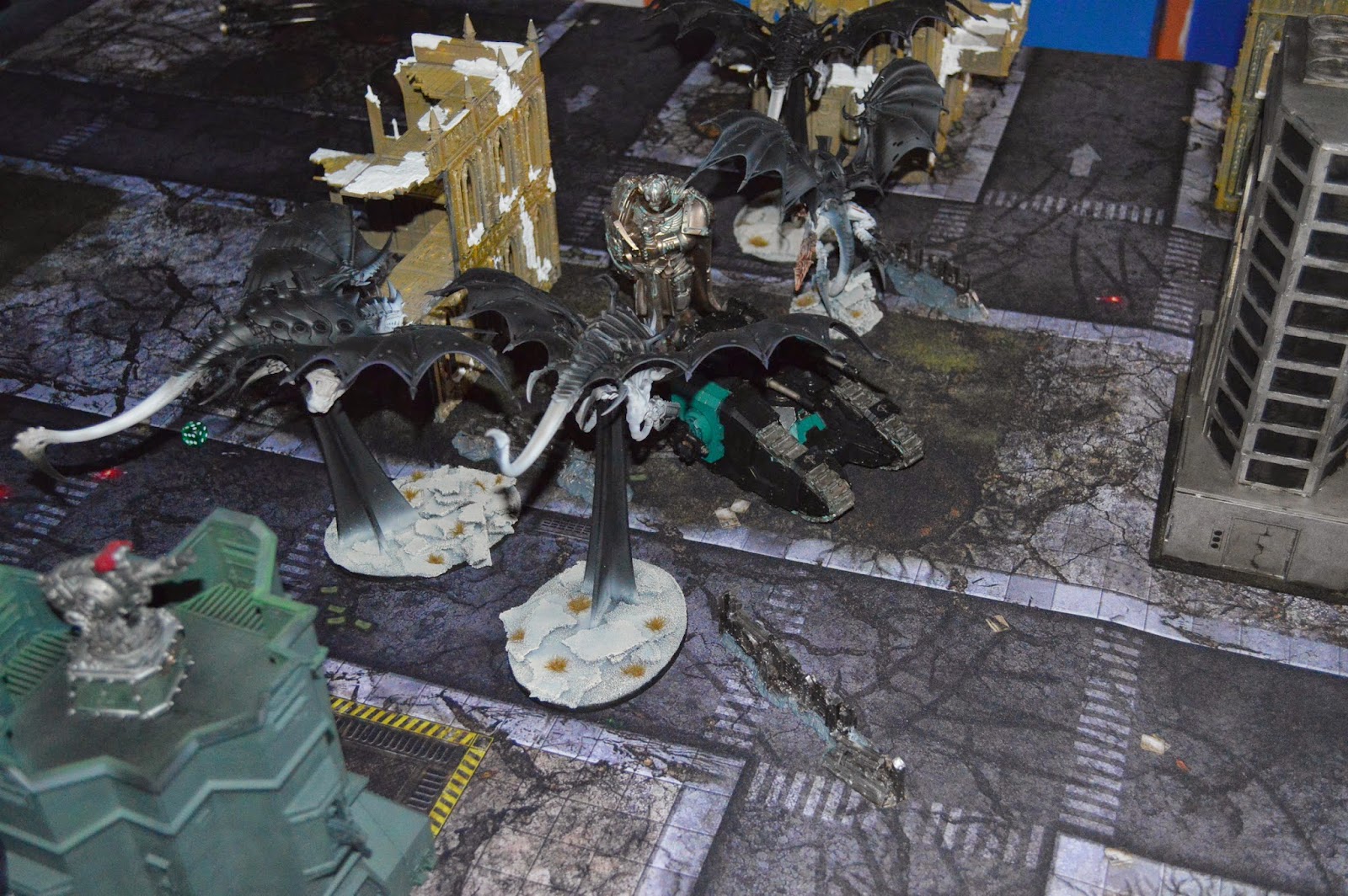 The Surviving Zoanthrope lances the Sicaran, penetrates and removes one of the many Heavy Bolters and then finally the Crone Swoops in and finishes it off by hitting it with a penetrating hit from a Tentaclid! Booyah! 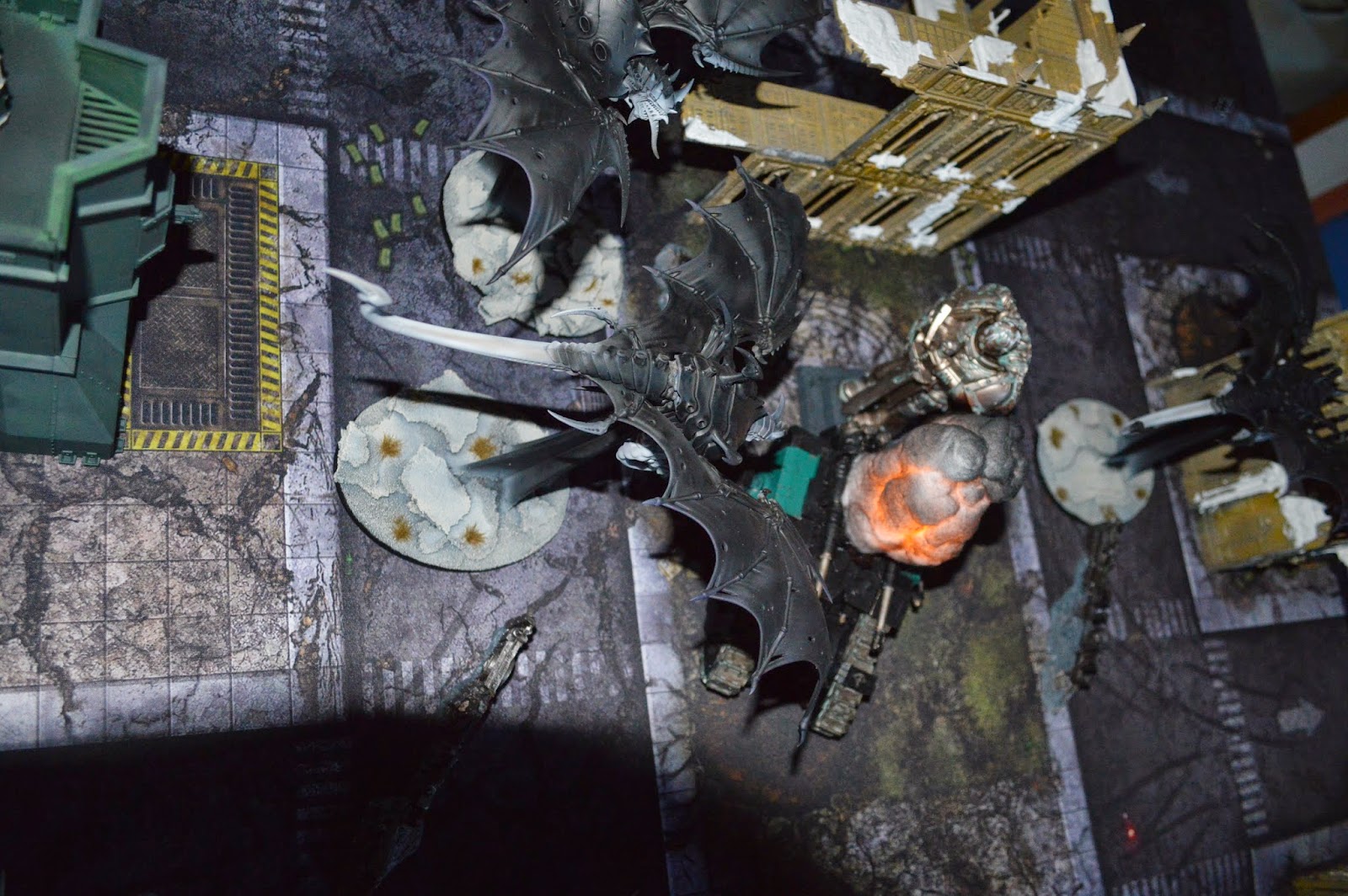 The Hive Tyrant Flies over towards the MOTF for a brutal showdown but as it cannot assault this turn it throws a killer amount of fire power into him and manages to inflict 1 wound leaving him on his last life.

The Venomthropes assault the marines but manage to get the tentacles BEAT! they die deservingly for being pathetic. haha! No Remorse! No forgiveness!

To the Bitter end.

The Marines run for the 2 Zoanthropes and multi assaults them. 2 Marines face the zoanthrope on 1 wound while 3 take on the fully wounded one. Combat is a lack lusting tie.

The Master of the Forge attempts to burn a hole in the Tyrant but fails to wound it with its plasma cutter and bolter so he throws all sense to the stars and heads full speed into it, Akira style – to which of course, the Hive Tyrant cut’s the MoTF into sushi which no amount of FNP saves can make…( I joke, he can make FNP – he just failed 2 out of 3 :] ) 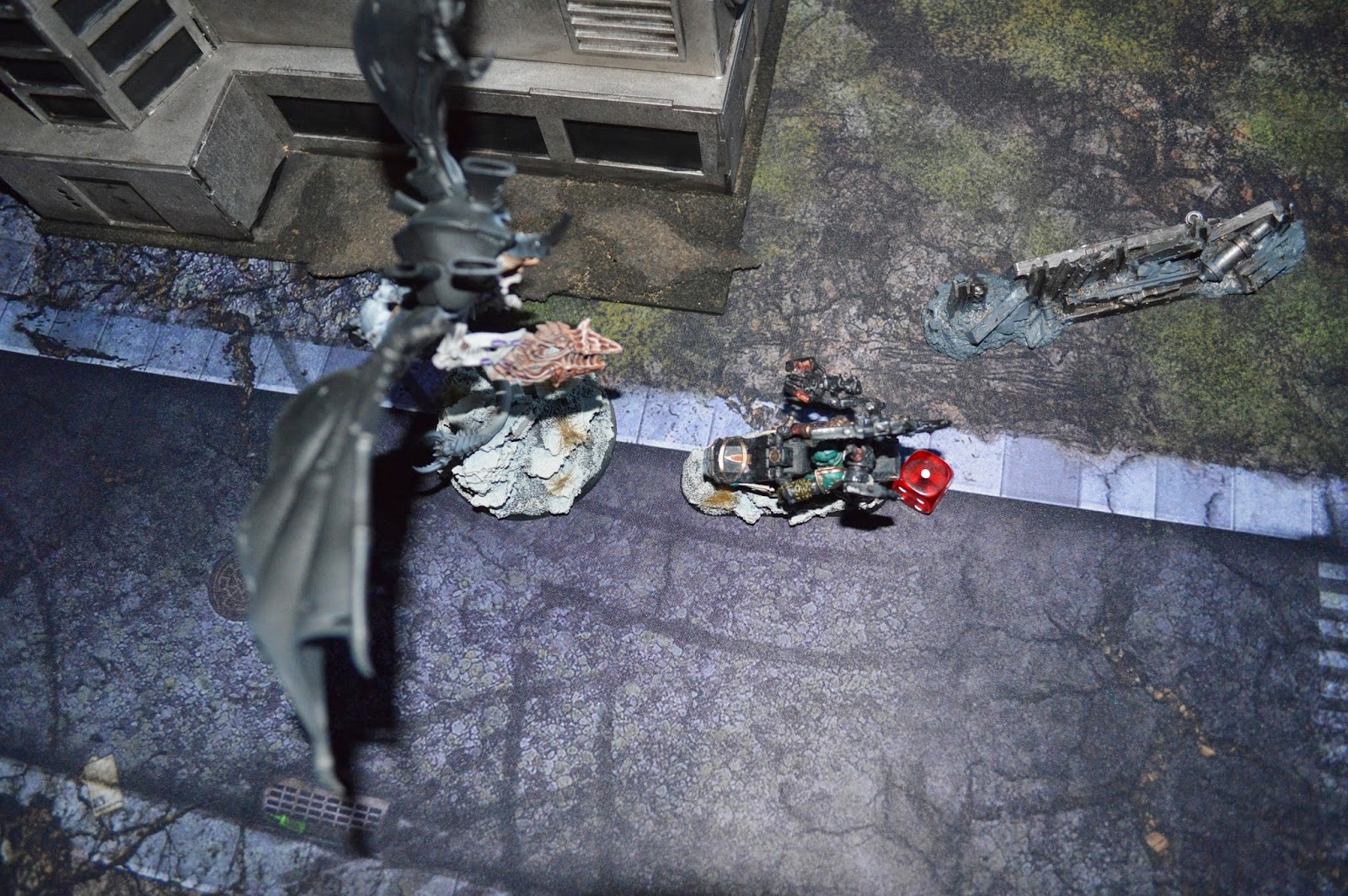 The game is called to an end as the Sons of Horus have been severely devoured by the Hive Fleet Nightmare and just cannot recover from the savaging they have received!
Final Score
Tyranids: 9
Sons of Horus: 5

I wonder how the game would have faired if the first turn had been more prevalent for the Sons of Horus. They had more than a few crummy turns – one of which was where the knight failed its assault on turn 3. I think if it had made it in, it would have stomped everything in that corner to goo. picking up 2 kill points for the zoanthropes, 1 for the venomthropes and 1 more for the Termagants. Also if the knight where to be locked down in CC it would have probably survived the bullying it received from… everything.

Big things are big targets and that is one of the reasons why you  I take super heavies! They soak up a lot of pressure and allow other less scary units claim the glory. Very happy for the Tyranid’s to come out on top – They earn their dinner tonight!

Anywho! I hope you enjoyed the game, i’ll have another report up this weekend facing off a Knight army with my Nids… Lets see how well that one goes!
Until the next time!

← I finally beat Tau with my Orks!
Is 7th Edition Balanced? →

17 Responses to “Guest Bat Rep: Sons of Horus vs. Tyranids”