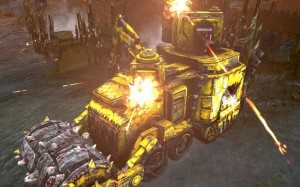 Had a game yesterday with my Orks vs. Raw Dogger’s new, nasty, Astra Militarum list featuring a Stormlord that he has been kicking butt with. I wanted to share some of what I had learned about the Blitz Brigade and Battlewagons in general. As always check out the Tactics Corner for more great reviews!

The Blitz Brigade consists of 5 Battlewagons, all which must take a Ram or Deff Rolla. As Deff Rollas got nerfed to high, holy hell, it will be all Rams, all the time. In addition, their special rule is that they all get Scouts, which is pretty fantastic.

I ran the following:

Let me preface this by saying I lost the game BIG. Like, severe ass whipping. But, to give an idea of what the game was like, my very first action of the game was to move my Battlewagon with Mad Dok over my own Aegis and rolling snake eyes to immobilize myself. 1/36 times, it happens every time! Raw Dogger only fired the Manticore twice, but he blew up 3 Battlewagons by the top or turn 2 with it as a lucky scatter on the second shot actually allowed him to clip two BWs, and then proceeded to roll a 6 every time on the damage table. Doh! Yeah, so it was that kind of game. That said, I see the potential in the Wagons and know what I would do differently, next time. Also, I immobilize myself all the time even with the reroll, lol, 3 out of the last 4 games I have done that! Que sad trombone. 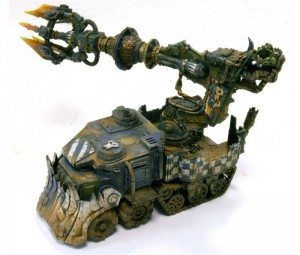 As for the Battlewagons themselves, they were excellent despite my bad luck. Grot Riggers on that many wagons is not needed. When your main goal is to assault, you only need to live for a turn or two, max. The riggers won’t really make a difference there. For the same reason, you don’t need the Meks, either. They work great on a Wagon that is hanging back to shoot, as with Lootas for example, but on an assault boat, keep it as cheap as possible as it is likely to get smoked. The Scout move was really awesome. Raw Dogger had Servo Skulls which largely kept me from getting too much closer, but he had an infiltrating unit with Meltas that would have been able to hit side armor on one of my Wagons turn 1, but I used my Scout move to redeploy laterally in my own deployment zone to get away from him. So, even without going up-field, it was still very useful. I could have Outflanked too, had I wanted to, but I like to keep all my assets in play if possible so I can overwhelm my opponent.

I stuck the Megaboss with the Lootas so they could move and shoot via S&P. First off, this is not the best idea if you want them hanging back and shooting as the Megaboss wants to go forth and stomp. A Megamek would be better here, with a KFF, too. The Lootas in the BW though, were hawt. They stayed safe and were pumping out fire power. This is the type of unit that goes well with Grot Riggers and Meks as it will be more likely to benefit from the repairs in a war of attrition. That said, if you do have to assault with them, they hit like Shoota Boys which isn’t bad, and if they have a S&P model with them, they can fire their guns and still charge (but lose Overwatch). 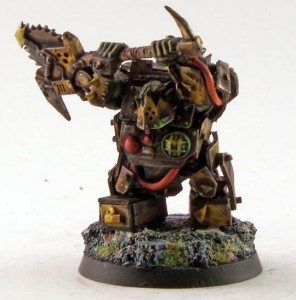 The MANz had terrible luck and their Wagon got blown up on the first shot of the game by a lucky Manticore volley, but as I had Scouted forward, they were still a big threat. They unfortunately died a terrible death before doing anything, but turn two they were still in Raw Dogger’s backfield despite their transport never actually going anywhere. That is one of the benefits of the formation: so long as your opponent can’t stop Scout moves, you are assured to be close to them even if the wagons getting popped early in the game.

The BIG downside to the wagons though, is that with the new Explodes! rules, a big unit of Boyz gets out where the Wagon was, in perfect blast/template formation. I had a Wagon explode, the Boyz inside took 6 casualties from the explosion and then get hit by a Wyvern which killed the remaining 14 Boyz in a single volley. Ouch! You really have to be mindful of that as it will devastate you. You don’t have much wiggle room when getting them out as the footprint of a BW is actually pretty small.

The Aegis did help to mitigate the direct fire weapons, but, the Manticore was what was busting my balls and an Aegis doesn’t stop that. Perhaps a VSG or even a Skyshield would be better. Or, nothing at all and save the points. Often with the Scout move, you will leave the static protection behind.

By the time I made combat, and I did eventually make it, I had too few Boyz left to do anything. Raw Dogger has a blob with a Priest and Coteaz who ate the Boyz that assaulted them for breakfast (Priests are amazingly good for 25pts, holy crap) and another unit killed a squad of Vets, but then were left in formation for Heavy Flamers and those Ork Mulching Wyverns to do their thing, and got obliterated.

The other weakness was that I had no support units at all. If I played an air force or flying circus, I would have had a rough go of it. 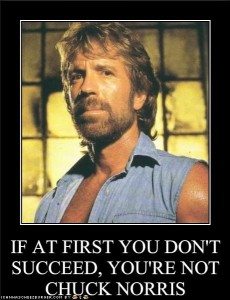 Giving it another go, I would make it very one dimensional: as many Boyz going up the field as possible, as cheaply as possible.

That’s a lot of bodies, klaws and AV14 going upfield with enough points left over to get some decent support units. It’s also 5 ObSec scoring units, too. You have enough bodies to take some pretty hefty casualties and still hit hard when you get there.

The other nice thing about this Formation is that with Scouts, you can risk not taking a Warboss for that awesome WAAGH!!. I would consider taking 2 regular Painboys in this list as very cheap ways to buff two of the units of boys and make them far more survivable.

That brings you to 1500pts. So, with that, I would look at filling some really important gaps. AA for one, and Traktor Kannons are amazing for that. A unit of 3 with 3 ammo runts works great and is only 129pts. Lobbas allow you to shred light infantry almost anywhere on the table, and run 105 for 5 with ammo runts. That puts you at 1734. 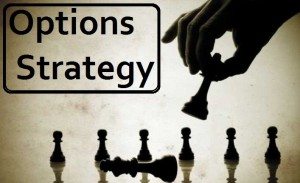 You have a number of options there, you could push some stuff around and add in a unit or Rokkit Buggies, take a Burna-Bomma, up-gun one of the Painboys to Mad Dok, up-gun one of the units of Boyz to Lootas, etc. You have some room to fine tune it to what you want, exactly. It also leaves you room to give one unit of Boyz Eavy Armor so that they can be the hardest Boyz around!

Alternatively, you could look at swapping a unit or two of Boyz for some Tankbustas. They run 35pts more for 15 than a unit of 20 kitted Boyz runs but, they pack a wallop. They will also have a huge target on their head and give you less bodies although they’re still Orks and hit like Shoota Boyz in an assault which isn’t bad. The ability to really smack a tank or 3+ save MC can be extremely useful though, so this option certainly bears consideration.

In all, I think the Blitz Brigade is a solid formation with a lot of potential. It is an extreme list though, that will often overwhelm someone who can’t deal with it, or get owned when someone has the right tools and a bit of luck as Raw Dogger did against me. I will certainly give it another go, I think it can be a really powerful tournament list for Orks and, it plays very fast, too as there are so few models on the table!