Mob Rule: One of the worst rules in 40K? (Updated) 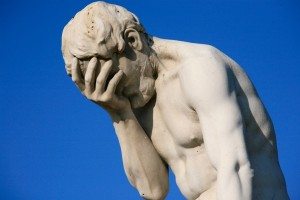 Sometimes a rule is so bad, it’s terribad. This article has been updated, some good conversation and a lot of questions came up, I wanted to address them.

I have absolutely no idea what anyone was thinking when this rule was written. I keep re-reading it hoping I missed something…..

So, what is Mob Rule? It is a rule that Orks have wherein if they fail a morale or pinning check, they roll on the Mob Rule table, and then see what happens.

Let’s recap, shall we?

Every single time you fail a morale or pinning check, you beat the crap out of yourself or run away/get pinned. Why is this so bad? With a 6+ save, any wound is basically a dead Ork. And, you can end up taking multiple morale/pinning tests a phase and watch your units destroy themselves. In my first game with Orks, I killed 22 of my own Boyz. That’s not including Boyz that got killed from exploding vehicles, that is strictly from my own guys killing themselves.

With average ld7, you have a 42% chance of failing a Ld test, roughly 1/2. So, each time you get Tank Shocked, you can test. Then, if you get hit by pinning weapons, you might test for each incident. Take 25% casualties? Test. In a vehicle that explodes? Pinning and possibly morale, too. Each time, you take D6 wound or just run away….it’s brutal, your units just melt. The best is when you are in a vehicle that explodes, you fail your pin check, kick your own ass, force a morale check, then kick your own ass again. I had one unit hit itself 11 times from a single exploding Trukk. 5 from the pin check, 6 from the morale check.

Routinely, after a Trukk exploded, I watched 6-9 of my Orks die. Losing the old Ramshackle, plus exploding vehicles getting more punishing is REALLY painful for armies with low armor like Orks.

There is no safety in big units either, you just become a bigger liability. 30 Orks get tank shocked? Might be killing some of your Boyz or even running away. These big units become more of a risk as you pour points into them.

Boss Poles let you reroll the Mob Rule result, but it doesn’t help a ton. The problem is the table itself.

I keep hunting for ways to get around it but there aren’t many. You can take a bunch of Warbosses in 30 man units to go for Ld9 which helps a lot but doesn’t fix the issue. It reduces the odds of failure but increases the penalty when you do fail as the unit has more points and HQ assets sunk into it. Plus, you use up all your HQ slots to buff only 3 units. You can take Ghaz making you fearless for a turn, which helps a bit but again, is no solution. Grotsnick grants Fearless to his unit and some of the Warlord traits help with leadership rerolls. If you take the Ork Warband formation and get lucky and roll a 1 on the Warlord table you can WAAGH! every turn and make everyone fearless, but that is hardly something to count on.

If we’re missing something, please point it out. But as it stands now, the easy button to defeating Orks is to just force them to take Morale checks. They die in droves just as before but no they don’t get Fearless over 10 Orks and help their opponent out by kicking their own asses. It feels like a HUGE detriment. It makes Synapse look like a walk in the park.

If the Boyz lost the old Mob Rule (and why in the blazes take it away? I don’t get it) why did they stay the same points or go UP with Shoota Boyz? Yes they gained Stikk Bombz (Assault Grenades), but who cares? They have very little to no practical impact on the game with a unit that is I2. I shudder to think about what an Astra Militarum army will do to Orks. Hiding in vehicles doesn’t seem to help as they explode and cause 1-2 checks, too.

And you HAVE to take Boyz or Grots as troops, there is no getting around it unless you go Unbound. You can’t take Nobz, MANZ or Bikerz as Troops anymore. They still have the rule but are more durable can can avoid some of the impact.

What do you guys think? Spot a loophole or work around that we’re missing? I am struggling to find the silver lining.