Rippers and Other Nid Hawtness

You are here: Home › 40K › Tactics › Rippers and Other Nid Hawtness

I’ve got bugs on the brain! Check out the Tactics Corner for more great articles.

I love my bugs. I can’t quite em. The Codex is still pretty disappointing, but, I am seeing a lot of positive in the 7th ed context.

So, the subtle changes to 7th ed have really impacted Nids, more so than many other armies, in my opinion. I have been talking about these and other changes quite a bit with other Nid players like inControl on our team, and we have noticed a lot of little but interesting changes that really impact the way you write your Nid list. 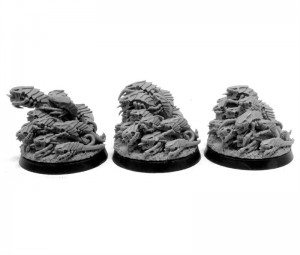 I think these little bad asses might be the new thing for Nids. Why? Several reasons. 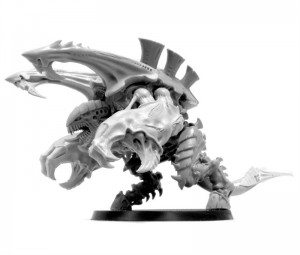 TMCs (Tyranid Monstrous Creatures) are relatively cheap and hit pretty hard. They are fairly fragile though. Toughness 6 and a 3+ save are really nothing special in the current meta. The answer then, is to go WWII Russia status! Quantity is a Quality all of its own. Plus, now they are scoring units. Nice!

Take LOTS of TMCs. As many as you can fit outside of the necessary scoring units and support units (which we will get to). I have found that that this works really well by simply overwhelming your opponent’s ability to deal with the volume of threats you present before you are into his lines. The trick is volume. Add in the minimum of upgrades to each TMC to enable them to perform their given role. The ABSOLUTE minimum. Assume each of the TMCs is going to die and that every point spent is a liability.

Dakkafexes (Carnifex with 2 sets of twin Devourers) are studs. For a meager 150pts, they give you a multi-role unit that shoots well and with twin link can take on air targets. Also, now that smash has gotten nerfed, they are fantastic comparatively at taking on armor with their base strength of 9 and D3 Hammer of Wrath attacks.

Tervigons as assault monsters. For some folks, this probably sounds like a no brainer as you have always done it this way. However, for me personally (and I am sure many others) I always used Tervigons as a resilient backfield objective scoring units and synapse providers. Typically with a ton of high threat units going up-field and the hard to kill status of a Tervigon, they often didn’t even get shot. However, now that the Tyranid paradigm may shift away from old style builds to all out offense I could see a Tervigon taken as an HQ choice with Crushing Claws whose primary role is to go up-field and fight, and secondarily to produce ObSec units if needed. Crushing Claws are amazing now as they give you +1 strength and armorbane and fill the gap left by the Smash nerf. They then become a blended role unit and when coming at you in an armada of other TMCs, present some very difficult target priority choices for your opponent.

Haruspex. I really didn’t give this guy a second look in 6th as he was just a bit of a wet noodle compared to all the other TMCs. However, in the context of an all out TMC rush, his position in the Elites slot and his coming with Crushing Claws and the ability to chew through infantry fairly well and is an absolute menace to vehicles. Give him Adrenal Glands for Fleet and Furious and he is a really solid TMC that blends like the Tervigon above, becomes one of many very difficult targets.

The usual suspects are solid, too, like the Flyrant, Exocrine, etc.

Venomthropes. They were damn near auto-include before and now that there is less Ignores Cover and better cover saves in general to be improved by Shrouded, yeah, I doubt you will see a serious Nid list without these guys. They are such tremendous force multipliers that they can’t be ignored. They make all your points invested into other units go a lot further. They protect your investment. Take them. Take two or more. Be careful with them though, as they can give up First Blood like no one’s business.

Hive Guard. Yeah, remember these guys? They’re going to be coming back. Mark my words. Despite the (totally unnecessary) nerf to them, Hive Guard still provide a vital role in a Nid army: they pop medium vehicles and transports. With Ignores Cover, and Homing (ignores LoS) on a strength 8, Assault 2 weapon on a T6, 2W platform, these are a solid unit. Plus, they Doo-Doo on one of the most under-priced, over-valued units in the game: the Wave Serpent. As vehicles–particularly transport vehicles–will be back with a vengeance, Hive Guard will have a niche in the new environment, too.

Biovores. Biovores are fantastic. They always have been but now especially in a meta that will be seeing an increase in MSU scoring units like combat squaded Marines, Jetbikes, etc. Biovores will find themselves in a target rich environment. I run them in the Living Artillery formation which twin links them, and yeah, they routinely cut a swathe through enemy infantry.

We’re not being smashed!

Multi-wound, mid range toughness models in general got a lot better in a gaming environment that doesn’t swim in Smashing Monstrous Creatures. Ogryn particularly jump out at me (but I digress). Raveners, Warriors, Shrikes, Lictors, etc. are all much more viable in this new context. While you will still have those games where you find Psyfilment Dreads, or Missile Launcher Spam, lots of Thunder Hammers, etc. across the table and your heavy investment into these medium bugs become a huge liability, they are MUCH better comparatively.

We were cool back in High School!

Poor Crones and Harpies. They get hit hard by the new rules. They aren’t bad by any means. But they are a lot less powerful than they were. If you have them, and they’re painted, rock it. They don’t suck at all. But they will see a fairly dramatic decrease in efficacy.

So there you go! I think that Nids still piss me off to high hell and back for the missed opportunities, but, their is a silver lining. I have been really enjoying playing the army a lot, and they have been winning me games. What do you all think?

50 Responses to “Rippers and Other Nid Hawtness”