Orks With Hammerhand and Other Feats of High (WAAGH!) Magic

You are here: Home › 40K › Tactics › Orks With Hammerhand and Other Feats of High (WAAGH!) Magic

Adam from WAAGH!! Drillteef is back with another article! Check out the Tactics corner for more great articles! 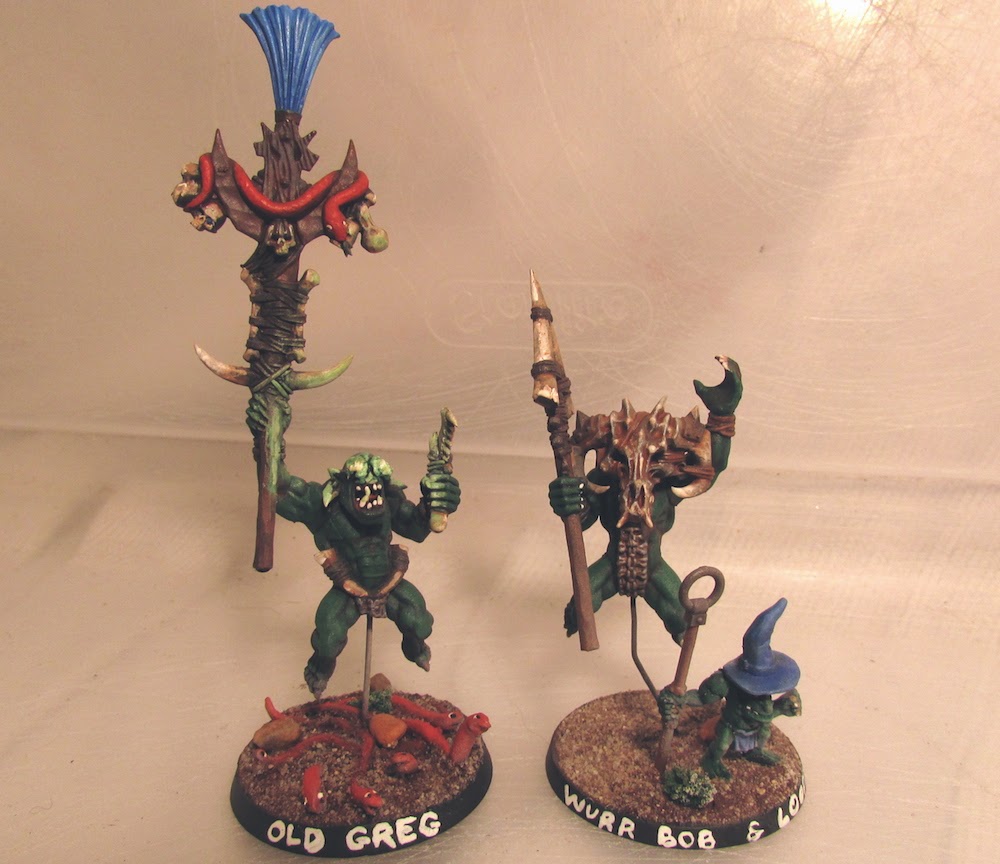 The title comes with apologies to White Wolf Publishing.

I attended a team tournament at Dirty Goblin Games this past weekend.  With a thousand points each, I brought my Star Eagles with six combat squads in Drop Pods and two Librarians.  My buddy, Skip, brought some of my Orks which were basically a Green Tide list with two Warpheads. 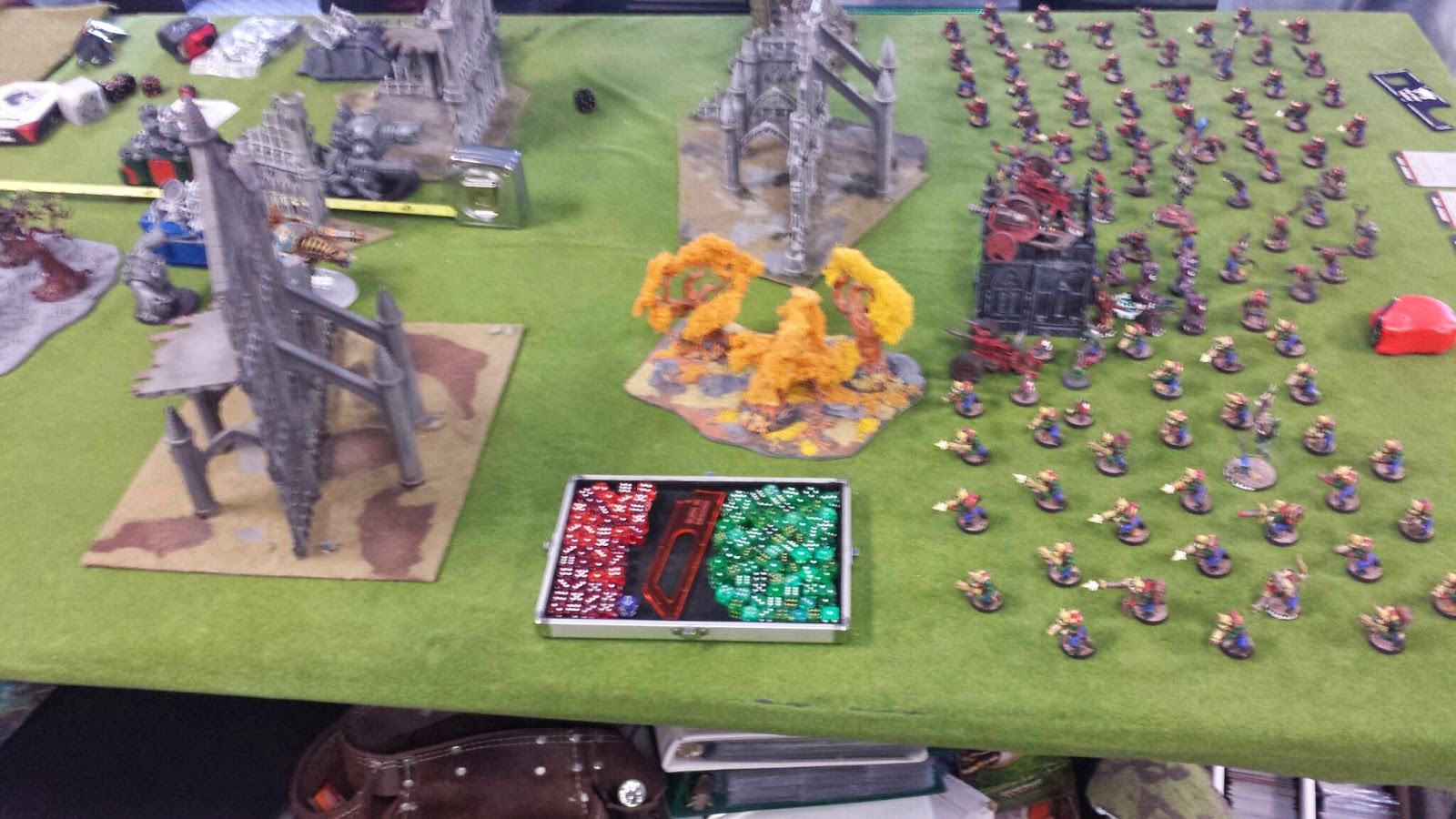 I was very keen to use the new Psychic Phase to see how it was in practice and Skip was acquiescent. So, we each had 4 Warp Charges plus whatever the die rolled.  The rules for that tournament were such that each player could only use his own Warp Charges, but could share the ones rolled on the die.

Some hullabaloo has been made of summoning Daemons and of how Orks have lost their wacky table of powers.  I’m not really going to speak to this very much because I, personally, find Sanctic Daemonology to be a very strong and fun Ork choice at least until we get our new codex.

Note that I am not blind to the fact that the danger of invoking a perils on any double can be quite daunting, but in all honesty, as Ork players, we should be used to our models vaporizing themselves into piles of ash and/or goo by now.

Let’s take a look at the list of powers, shall we?

The Primaris Power, while not particularly Orky, may end up being a workhorse of many psychic armies.  Even when you must take it in games where there are no enemy Daemons, there is a distinct possibility that some will be summoned throughout the game.  Keep this one handy because it’s quite possible you will not have enough dispel dice to stop every successful summon.  Also, I can imagine it’ll taste real good to use this on some of the meaner units in the game.

Hey, look! We still have ‘Ere We Go!  Use this as you would have used ‘Ere We Go in the past. Teleport scoring units onto objectives, or zoink 30-man Shoota Boyz squads over to the enemy and fill them with holes, or even teleport out of an impossible combat.  Whatever’s your poison.

So, here’s the thing.  Hammerhand on a squad of Boyz is so rad I can’t even articulate the feeling it gives me.  During the tournament, John’s Orks slogged through so many enemies, including the likes of Dreadnoughts and Forgefiends with sickening ease.  Think of the things this allows Orks to handle that we previously couldn’t without a klaw.  And the klaw!  A nob swings at Strength 10 whether he’s assaulting or not!  Also imagine how much this power helps mitigate the negatives of a disordered charge.  We can multi-assault vehicles again!

With this power, Orks with Cybork Bodies or a Kustom Forcefield (at least from a Morkanaut… we’ll see when the new Codex drops) will have a 4++ save.  This is a really nice bonus for boyz trying to slog across the field.  Just make sure to Place the Boyz who must be outside the KFF in the wake of the KFF because you want the ones with the 4++ to take the first hits.

This is almost exactly the same thing as Zogwort’s Curse except the enemy doesn’t get cool Squig model to play with and, sadly, Saint Celestine and Necrons can come back from it.  It’s also probably more useful because you can use it against any model you like, including that jerkface with the flamer or a single model trying to run and hide and isn’t in the unit you want to assault that turn.

Give the enemy a taste of their own medicine!  Of all the other powers, this is probably the least Orky. That’s fine.  It may help you even things out in a close combat which is going poorly for you.

If I have to tell you why I consider this power Orky, then I think you need your head examined.  It creates a vortex of power which jumps around the battlefield eatin’ gits left and right with impunity. Pure Orky joy made manifest.  The power also adds a lot to the Ork arsenal and creates quite a stir when you toss it into an enemy unit just before you assault it!

Yeah, well, it happens.  It doesn’t happen a lot.  Be smart with your casting.  Play up the spells you don’t want as badly.  Play down the ones you want the most.

But… Armies with 36 Warp Charges!

Yeah, well, that’s what DreadSock is for.

Anecdotal Evidence isn’t Proof Positive, but There’s Pudding to be Had

Though we did emerge the victors, this was, of course, just one tournament.  We’ll see how it pans out in the future.  I will be interested to see how it works for them when not allied with 1000 points of in-your-face drop pod Space Marines.   Also, things may be quite different when those two Warpheads have to help cover a full list instead of just half a list. 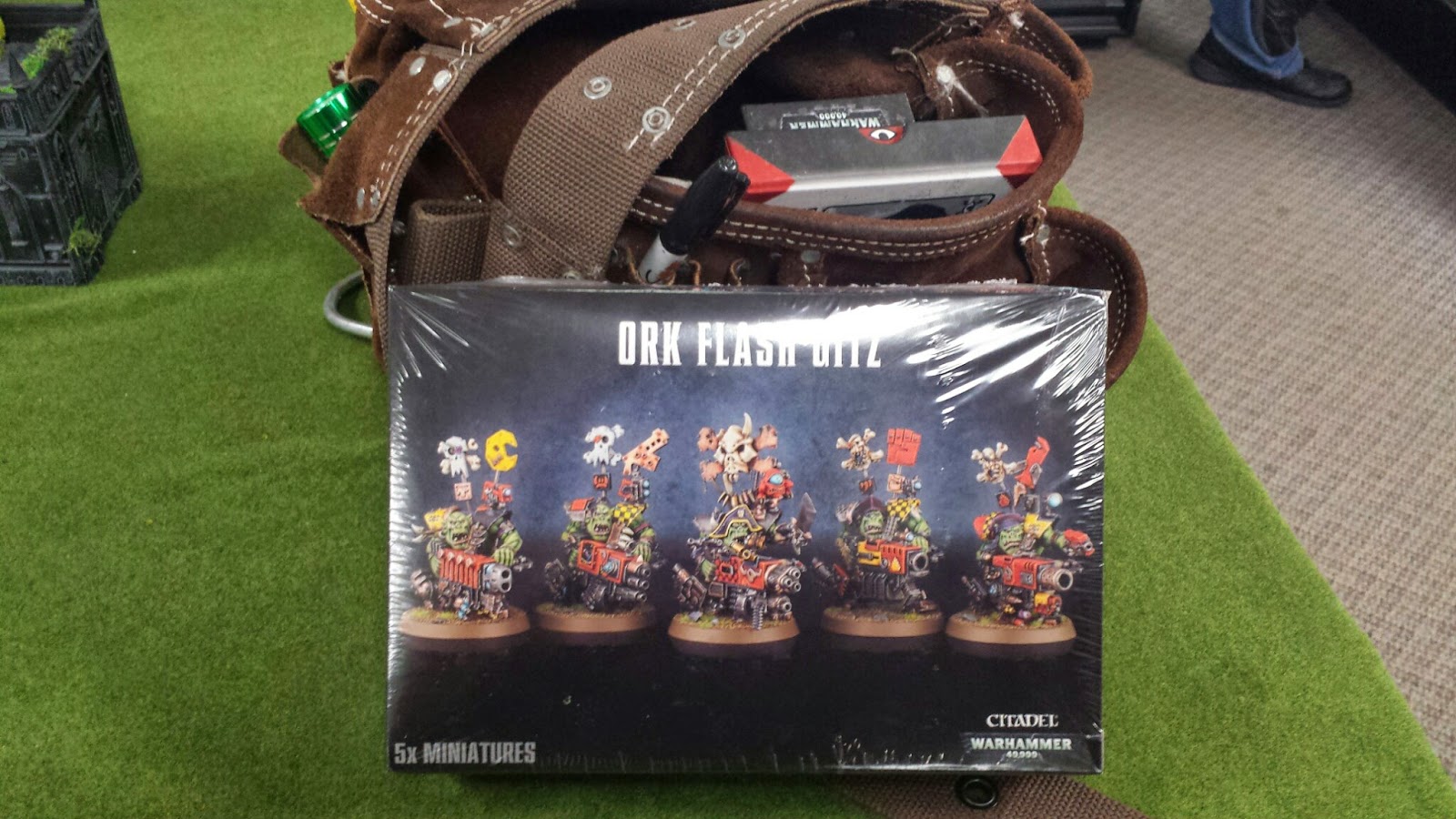 At any rate, I had a blast watching as the Orks tore through enemies with glee.  Sanctic Daemonology is VERY Orky and it isn’t chock full of Dispel bait the way Malefic is.

I can’t wait to see what we get in the Orks codex!

3 Responses to “Orks With Hammerhand and Other Feats of High (WAAGH!) Magic”