Lords of War, Are they Worth the Points? 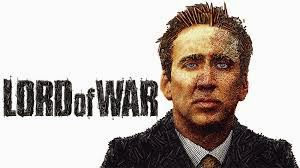 Reecius here from Frontline Gaming to talk about Lords of War in tournament 40K.

Lords of War (aka, Super Heavy Vehicles, Walkers and Gargantuan Creatures) are some of the most iconic units in the 40K universe. 7th ed is pressing the point on us that GW wants us to play with (and of course, buy) the big toys. I personally love the big models and always have. I personally own 5 (Revenant Titan, Stompa, Hellhammer, Baneblade and a Stormlord) 4/5 of which are fully painted. I rarely ever used them in the past though, because they were simply not used in “normal” 40K or just too powerful to make for a fun, fair game, IMO. Now that D weapons have been brought down to a manageable power level, the biggest issues with most LoW have been mitigated. For our upcoming Bay Area Open tournament, we ran a player poll (which you can read here if interested) and our event attendees voted to allow Lords of War into the BAO but with restrictions. Sweet! Time to see the big boys on the table and not have to worry about people having their game end up being no fun due to some crazy D weapons. 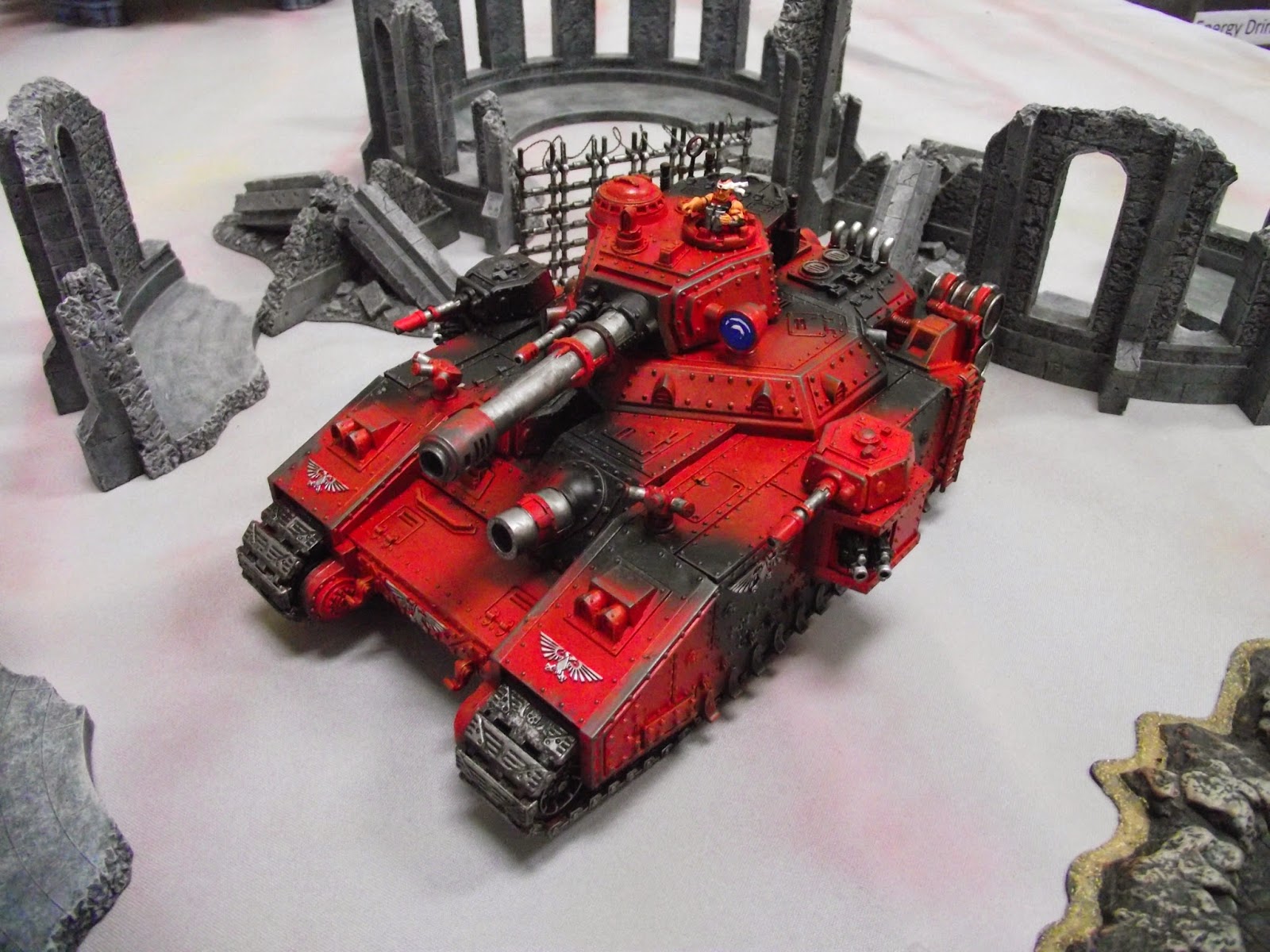 So, we decided to limit the Lords of War available per our attendee vote to keep the power level to a reasonable level. We decided to omit those that were just super powered like the Chaos Daemon Lords, and the LoW that have large, ignores cover blast or Hellstrom weapons as those are the ones that most often give the opponent that defeated feeling when they’re picking up handfuls of model with no recourse of any kind. We wanted to err on the side of caution in the BAO, which will be our first go with them in the new edition. We are also using the Escalation additional rules wherein a LoW gives up a bonus VP for every 3 HP or wounds stripped form it. We are also using the rule that if one player does not have a LoW and their opponent does, they get +1 to seize and can roll on the Escalation Warlord table. If this first try with the LoW goes well, we can look at opening up more of the options.

We always like to be as thorough as we can and have been play-testing LoW at the shop. With the restrictions outlined above, and in the context of our BAO 7th ed missions (we use Eternal War and a modified Maelstrom mission format) we have found the LoW so far to be very balanced and fun to use.

Now, let me qualify that statement a bit more. The LoW DEFINITELY bring a healthy dose of shock and awe to the tabletop and will be wrecking face if they have good targets to fire on. We recommend people get a game in with them before the BAO if possible just to get used to what they can do. But, when you have to focus on scoring objectives every turn, and maneuver around the tabletop is very important due to mission parameters, the LoW with so many points concentrated into a single unit can limit your ability to react to changing table top conditions. 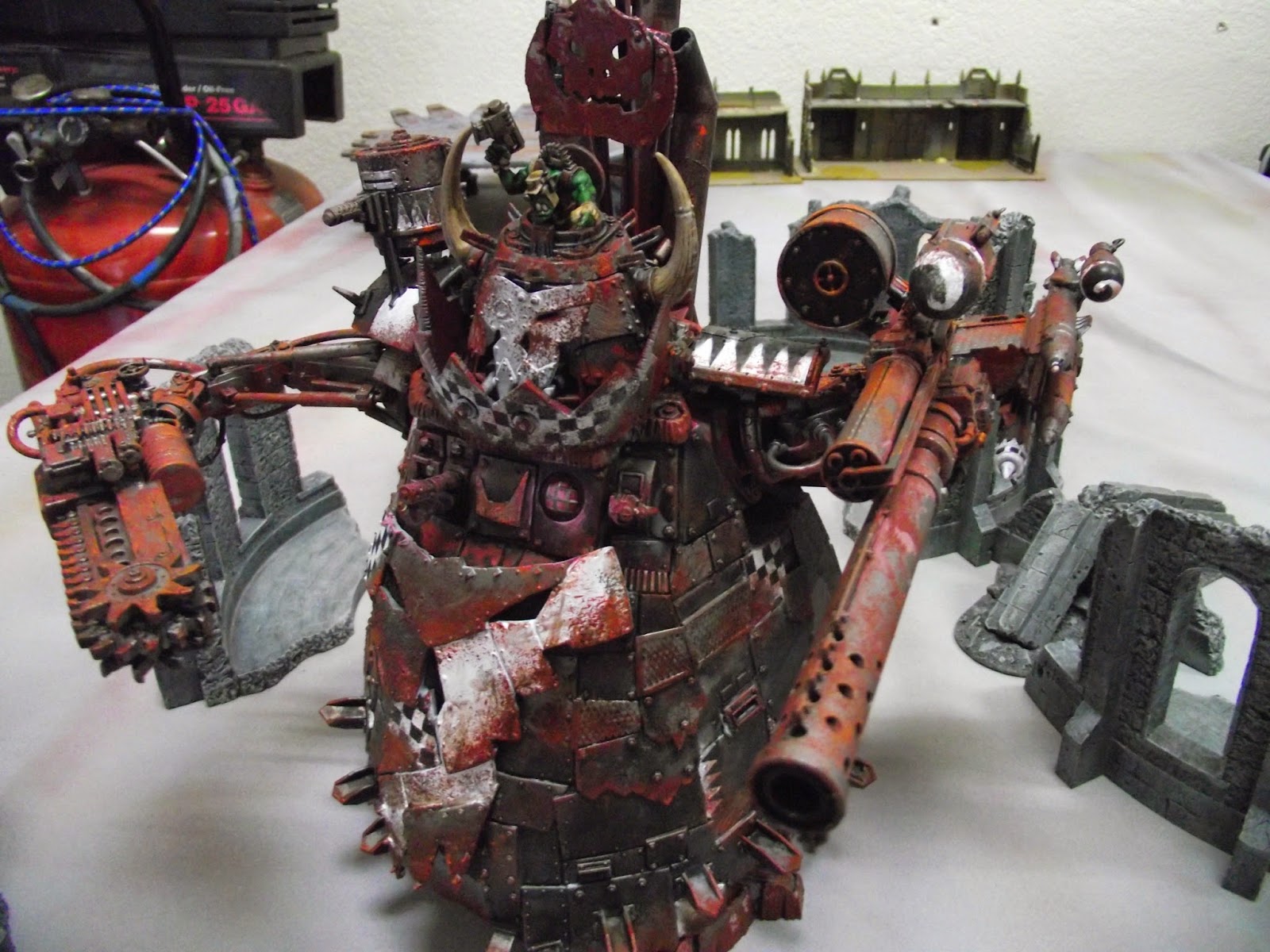 So far we have found that the LoW will bring the pain, but they limit your ability to win missions. We have tried playing a LoW focused army against armies designed to play to missions and the games have been fair and fun. A Drop Pod MSU ObSec Marine list vs. a Baneblade, Blob Sqaud AM list resulted in a great game that came down to the last roll of the dice and ended in a tie! The scoring Drop Pods were racking up Modified Maelstrom Points and while the Marines were getting owned by the Baneblade, they destroyed all of the AM troops before falling themselves! It was really dramatic and made for a great game.

In another game, an AM list built around a Stormlord vs. a balanced Necron list that played to objectives ended in a Necron victory as the metallic undead were able to contain the Stormlord and focus on racking up Modified Maelstrom points while tying down the AM scoring units in prolonged combat. Little 5 man units of Necron Warriors were free to stroll around the battlefield scoring points all game and taking end game objectives, too.

If you are using unrestricted LoW, standard  “score objectives at the end of the game” missions, and not using a healthy amount of LoS blocking terrain, you may find that LoW have a bigger impact on the game than we have. But, with progressive scoring as a part of the mission and plenty of good, LoS blocking terrain, they function well in the tournament environment we have found.

In the end the question to use a LoW comes down to whether or not you think the immense firepower is worth the immense points cost. They will drop a hammer blow on your opponent, but at the cost of multiple other units that could be winning you the mission.

What do you all think about LoW? Worth it, or no?

22 Responses to “Lords of War, Are they Worth the Points?”