Adam on Orks and Challenges in 7th ed

You are here: Home › Uncategorized › Adam on Orks and Challenges in 7th ed 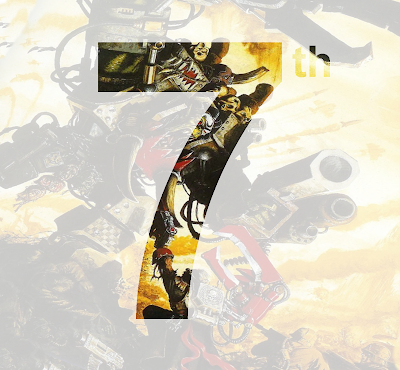 Adam’s back with another article on Orks and Challenges in general in 7th ed.
One of the most frustrating things about 6th Edition for Orks was the way Challenges worked.  Every once in a while, we could use it to our advantage, of course, by sacrificing a Nob or Mekboy in order to keep a unit alive for a turn, but at the end of the day a Challenge usually meant a dead Ork with no hope of retaliation.  Indeed, even if you packed two Power Klaws in the unit, the second Klaw was likely to be doubled out by Strength 10 precision strikes.
My friends, ring out the church bells and strike up the band because those days are over.

Challenges vs One Model

While reading through my 7th Edition book (painfully slowly due to being busy and passing out after reading two pages), I came across this:
Whilst the challenge is ongoing, other models locked in the combat can only allocate Wounds to the models involved in the challenge after all other enemy models that are locked in that combat (if any) have been removed as casualties, even if the models fighting in a challenge are the closest models.
What this means is that if you are fighting a single Monstrous Creature Character which challenges you, no longer are you just going to lose two power Klaws, then die.  Instead, you actually get a chance to get un-stuck from the son of a bitch.
This doesn’t stop two players from deciding to go ahead and do a single combat for thematic purposes, but this makes way more sense for the fluff of most of the armies in the game.  We aren’t all honorable do-gooders!

I thought this was nice and all, but it still wasn’t stopping precision shots from taking out Power Klaws in a denied challenge.  This was the real deal, here.  Being able to deny a challenge and still bring a Klaw to bear would be a true joy.
I was listening to the Overlords Podcast today and they mentioned something about Characters losing natural Precision Shots.  My brain said “Ha-whaaat?”, so I poured through my rulebook.
Nothing.  Nowhere to be found.  Indeed, there’s a “Characters and Shooting” section which simply states that Characters are treated like other models in the Shooting Phase, but usually have a higher Ballistics Skill.  I’m assuming that the authors added this as almost a pre-clarification on the topic.
My joy was swelling at this point and I just had to do an article on it!

Please also note that, now, you can’t duck out of a challenge by having your Character unengaged anymore.  I often left my Klaw 10″ away from the unit I was charging in the hopes that he’d be too far to be Challenged, but close enough to swing.  Now the language is clear that any “Locked” model may accept a challenge. Editor’s note: you still have to be able to swing to issue or accept a challenge, pg. 101 BRB.
Just like in 5th, you must try to pile your character into base contact.  I’m pretty sure this was omitted in 6th.  Now you’ll have to use the same shenanigans you did before to keep your Characters safe, but this is very manageable by handling the Movement Phase with intelligence.
I hope that brightens some Orky spirits out there.  It’s not great, but it sure is good and I, for one, am very pleased at this turn of events.  It is not only more fair and probably a lot more fun, but also a lot more thematic.
It’s a win for everyone.
Except stupid Monstrous Creature Characters, of course, but no tears are being shed on this side of the keyboard, I’ll tell you that much.

Posted on June 6, 2014 by Reecius in Uncategorized

6 Responses to “Adam on Orks and Challenges in 7th ed”