Let’s Get Ready to RUUUUUMBLE!! (Update 5 with two short podcasts) 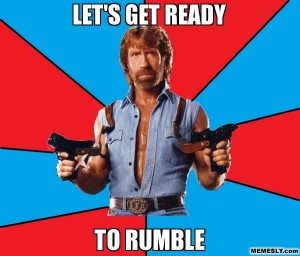 Well, today’s the day! We’re already pouring through everything, so be ready to get updates on the new edition of 40K! This post will be updated as we go!

So after about 5 games and seeing how the new mechanics play out my overall impression of the game is that we will have to rewrite a big chunk of the game in order to play it in tournaments. The game as it is right out of the book is borderline unplayable. They fixed a lot of the little problems, but the new problems they made break the game without some changes. For example, unbound armies, multiple primary FoC, using the mission cards without restrictions, etc. are not conducive to a fair game.

Some changes that will probably me needed: limits on FoC. Taking an army with one daemons, one grey knight and one Tyranid detachment is incredibly stupid. Beyond creating crazy combos, it’s just not fun. Or, more mundane, but equally fun killing, an army of all daemons heralds that summon thousands of points of daemons in one turn. Also stupid. Limits on warp charge. Unlimitted warp charge creates comically unbalanced situations wherein one player has over 30 warp charge and the other has 5 or so. It means one player essentially has no psychic phase. The mission cards on their own are incredible unbalanced. You often end up with situations where one player draws a good hand and the other doesn’t, and then the game is already decided.

We will also have to limit some of the powers possibly. Limiting warp.charge may solve it, but the malefic powers are crazy.

Invisibility is nutso. That and the fact that the 2+ reroll save didn’t go away means deathstars are better than ever in many ways. Again, we have to limit warp charge to begin to stop this or the game is going to degenerate into combo units again.

More play testing is needed but so far the game as is, is about 100 times worsethan it was for tournament play. With limitations on the crazy stuff, the are tighter in many ways.

I would say on first read through that this is more of an FAQ than an edition change. Now, the changes are subtle but mostly all good in terms of helping to fix things that were annoying which I like. There are some big changes in terms of how you make your army but honestly, most of those will be ignored in organized play as they are incredibly over-powering. The psychic phase is the real change to the game and it is useful in that it makes psychic powers less reliable. However, the game is like 90% exactly what it was before. I like a lot of the changes and you need the book to play the game so that is reason enough to buy it, but this is a pretty minor set of changes in total. The changes that are there largely fix some of the weird rules inconsistencies, some issues didn’t get fixed that needed to, and some loopholes seem to already be rearing their ugly heads.

The art book is pretty, but has very little content.

The fluff book is cool, especially for a new player, but for us older players it is all stuff we already know. I may have missed some new details but it is largely the same fluff as always.

← An Ork Song About Allying With Yourself!
7th edition Warhammer 40K Review: the Good, the Bad and Solutions. →

160 Responses to “Let’s Get Ready to RUUUUUMBLE!! (Update 5 with two short podcasts)”