You are here: Home › 40K › Editorial › Just Because The Sky Isn’t Falling On You, Doesn’t Mean It’s Not Falling On Someone 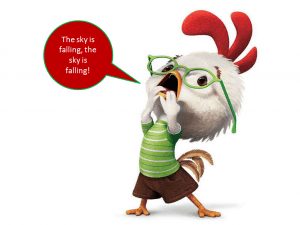 Having seen some of the reactions to the ‘unbound’ army lists reported to be allowable in the forthcoming 7th Edition of Warhammer 40k, a lot of people are saying one of two things. An Editorial by Tim Kaye.

On the on hand, you’ve got the people saying “The sky is falling, it’s going to be the end of 40k for me”, and on the other hand there are those who say “This is not the end, it’s getting annoying hearing that the sky is falling”. Now, this has got me thinking: why do people find themselves in one camp or the other on this?

Then I had a brainwave which made me see the whole thing in a different light: it’s entirely subjective how you see the potential outcome of getting rid of the force organisation chart. Imagine you’re a relatively new player, you started 40k a year or so ago. You have a Space Marine army based around the Battleforce box and another tactical squad kit,say maybe a couple of units of elites, a nice basic HQ and a couple of tanks. A basic ‘starter army’ of 1500 points.

Only trouble is, you don’t live in a big city or somewhere with a big gaming scene. There is your local store, but the last time you went in there, some guy who said “You should be honoured, kid, this is my Tournament list I’m letting you play against here”, then proceeded to put three Riptides down on the table, along with some other special Tau battlesuits which didn’t seem to actually do anything except help those Riptides eliminate half your poor Space Marines in a single turn. You’ve been there a few times since and it seems all the guys who go there on games night are equally hardcore.

All you want to do is play some games where you actually have a reasonable chance of winning. Your cousin sometimes comes to visit and brings his 40k stuff and it’s great fun. You both have a blast forging a narrative and you each win as much as you lose. You save up your money and buy yourself a new kick-ass unit and a super-awesome HQ. Next month in the store you actually do it, you squeak out a narrow victory against Mr ” Oh, no, I don’t play ‘normal’ lists”. You feel great, you know that with a little planning, strategy and luck, you can win against these guys. Things are alright.

Then you hear the news: there is a new edition on 40k coming out and they’re going to let people use whatever units they want. In two months time, that guy could have six, or even more Riptides on the table. How can you possibly compete with that? You have no interest in playing tournaments, but no other place to play. Is it really worth bothering with, just for the few times you and your cousin can have your awesome ‘floor wars’ in the school vacation? It just doesn’t seem fair.

These are the people I really empathize with. These are the people for whom it really must feel like the sky is falling. Like getting your driving license and then discovering that everyone is switching to driving backwards! I consider myself to be extremely fortunate. I am spoilt for choice when it comes to gaming clubs and groups in my local area and I have the opportunity to play all sorts of types of games of 40k, from testing my mettle against tough tournament lists, to custom narrative scenarios with fluffy, balanced lists and everything in between. I feel very fortunate because even if the sky is falling, It won’t hurt me. Not everybody is so lucky though.

← Interview with Hawk Wargames and Faeit 212
Signals from the Frontline: Warhammer 40K and General Gaming News, Rumors, Tactics and Comedy! →

58 Responses to “Just Because The Sky Isn’t Falling On You, Doesn’t Mean It’s Not Falling On Someone”