TinBane on the Dropfleet Commander Anouncement

You are here: Home › Dropzone Commander › TinBane on the Dropfleet Commander Anouncement 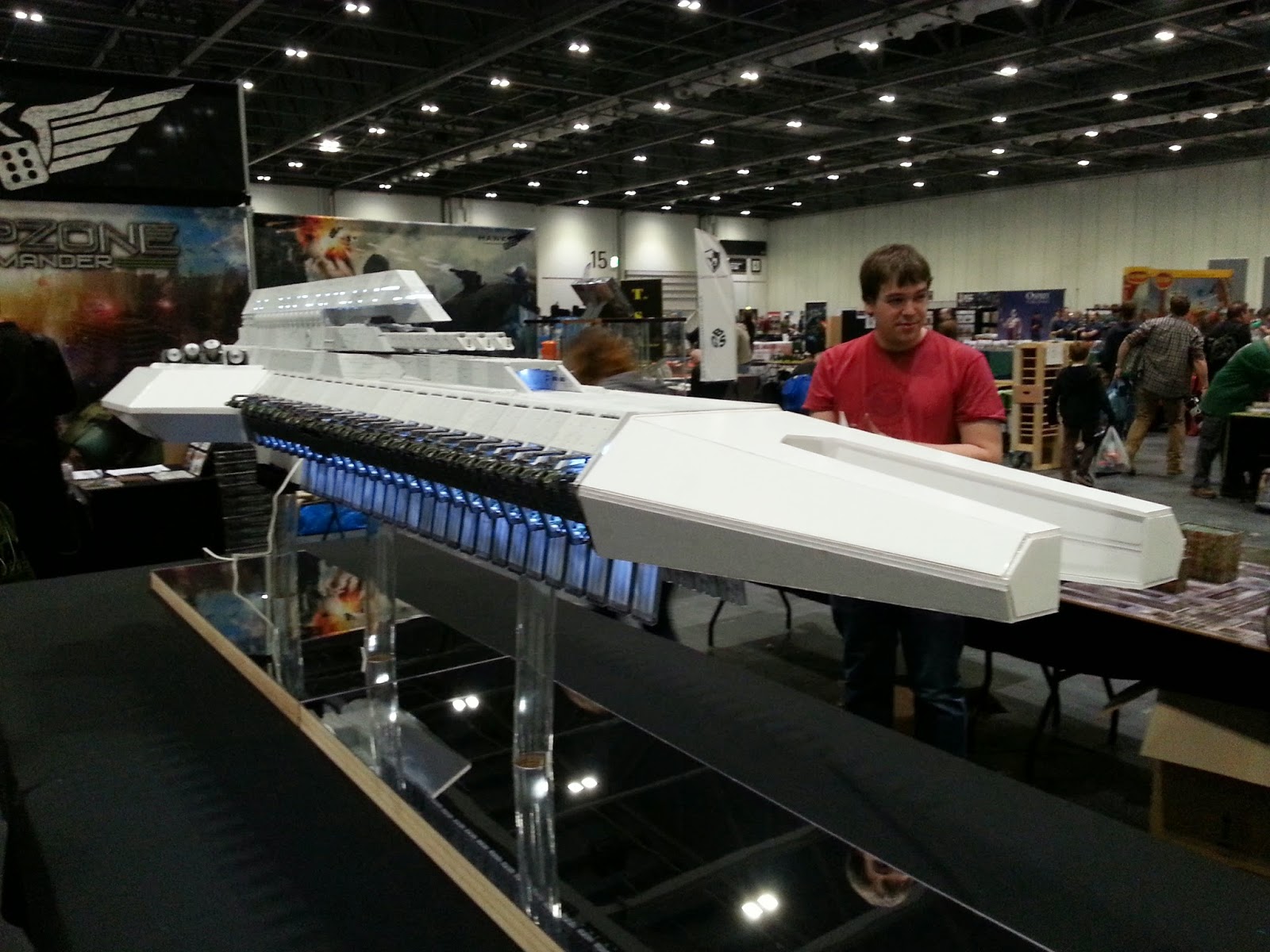 At salute 2014, Hawk have announced Dropfleet Commander. And they did it in style, with a full 10mm scale strike carrier. According to Dave, this is only one of the smallest units in the new game. Also announced is that Andy Chambers (of Battlefleet Gothic fame) will be designing the game. To say I’m excited is no under-statement, and here’s why.

The first pillar is the talent :

Andy Chambers produced what is in my opinion one of the finest tabletop games ever made. While Battlefleet Gothic was never perfectly balanced, it was well balanced (until someone else wrote the rules for Necrons which ignore core mechanics without the penalties Eldar ships take). His ability to write good rules when given a free hand, is pretty well undisputed. His writing style is great, and most importantly his name being attached to a tabletop fleet project, is the closest thing you can get in this industry to a guarantee of success. And being based in Australia, if a game isn’t successful then no matter how good it is, I won’t buy it. Because there’s nothing like having a great game, but nobody to play it with!

Dave made his own miniatures company from scratch, and kicked off development in a pretty much new scale, with a fresh background, great design, and using a new material to boot. He did everything himself, and without a Kickstarter to help him on his way. I personally believe that Dave is a rising star in game design, and the best is yet to come!

Simon was Dave’s first hire, and brings with him not only first class customer service, but the kind of mind that loves to break rule sets for the fun of it. Obviously the success of DzC and related games in a competitive sense at least on part, sits on Simon’s shoulders, as well as Dave’s.

Lastly Patrice is the newest addition to the Hawk creative team. He’s going to be producing the stunning artwork and fluff for future hawk publications. And his work so far has been nothing short of amazing. The artwork for the newly mentioned Dropzone Expansion is fantastic!

The Next Pillar is the DzC setting itself:

DzC is much “harder” sci-fi than many other settings, but to an acceptable level. Now, it’s always quite a personal taste, but I find a lot of hard sci-fi annoying. I also find the laxity of some other design studios at times frustrating. Hawk are not the kind of outfit to produce a new APC that is supposed to be very fast, on a series of small treads rather than wheels. There’s a reason you only see those kind of small-tread systems on very big machines, and in snow etc. It’s nearly always better to produce a big track (assuming the vehicle isn’t super-long) or stay on wheels. Small treads are slow, wear out, are difficult to repair, are less manoeuvrable and break (or get thrown) easily at speed. Not to mention that small tracks reduce ground pressure by less, and don’t help manoeuvre as well on uneven surfaces. Several small tracks is pretty much a retrofit option for use in environments like snow/low traction… ahem.

Anyway, it’s sometimes helpful to at least have some idea of actual industrial design/engineering when designing things for a sci-fi setting. And so far, Dave hits the mark. The setting involves five races (so far) of varying technology levels (although I doubt we’ll see the Resistance in fleet commander) with very different ways of doing things, and this frees a game designer to introduce interesting mechanics.

The Last Pillar is the technology:

This model looks amazing, of course it’s lacking detail, being much more about asserting an overall style and scale, than about final design with full detail. From the look of it, it’s sports several “orbital defense lasers”, which I’m imagining would be a somewhere between a “light” armament and point defenses. On it’s dorsal surface, it appears to have some kind of large kinetic gun, possibly a fleet rail-gun.  This vehicle is described as being the largest vessel capable of entering the atmosphere for the UCM, which possibly means that this is a very light carrier with a very specific role (pretty much a mission ship). Being atmospheric capable weight will be a MASSIVE issue, so it’s likely to be relatively light in armour and armament vs pure spacefaring vessels. I imagine whatever armour or protection it would have, would be focused on it’s ground-facing surfaces. I imagine these would work by swooping “through” the atmosphere, as the energy involved in taking one of these things (540M-ish long) from the ground to the air would be massive, let alone the stress on the structure.

Check out the hawk newsletter here for information on the new DzC expansion (Reconquest), a photo of a Resistance battle tank (looking very modern-soviet in design – lovely!), the release of scenery packs, 30mm prints (for painting and collecting I imagine) of DzC units, and more information on the Avenger.

Posted on April 23, 2014 by Reecius in Dropzone Commander

10 Responses to “TinBane on the Dropfleet Commander Anouncement”