You are here: Home › 40K › Tactics › My Homey, Commissar Yarrick 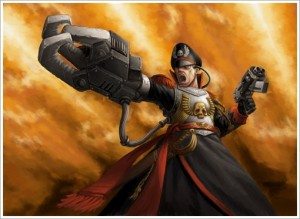 Hey everyone, Reecius here from Frontline Gaming to talk about the old man himself: Commissar Yarrick! Check out the Tactics Corner for more great reviews!

Commissar Yarrick is an iconic character in the 40K mythos, and one of my personal favorites. He’s a grizzled Commissar, the hero of Armageddon, Ghazzy’s foil, and a tough old koot! He’s also become the go-to HQ choice in the IG codex for me. 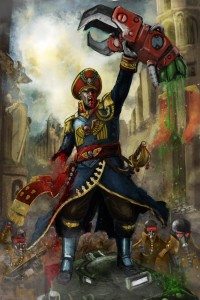 Yarrick gives you the best of a Commissar and a Company Command Squad in addition to being good in a fist fight and a tough SOB to put in the dirt. He’s also REALLY cheap for what he gives you, weighing in at 5pts less than 3 Platoon Squads. Yarrick is an all around exceptional choice for Warlord.

Yarrick really is the man that can do it all. I used him in for-fun games all the time in the old book and always enjoyed him quite a bit. Now, however, he is the stand out choice as Warlord, IMO. Be aware that there is a typically confusing, sloppy GW rules paradox in that he has both the Chain of Command rule (can’t be Warlord if any model has Senior Officer) and the Senior Officer rule which by RAW would cause him to stop himself from actually being able to be the Warlord even if he is your only HQ, but that is silly. He comes with a Warlord Trait, so intent is obvious and I know how we will rule it in our events. So, that aside, he makes for a great Warlord choice!

He has all the goodies you want from a Lord Commissar (Ld buffing), and a CCS (orders). The new Astra Militarum Orders are absolutely amazing and Yarrick can issue two, including Senior Officer orders. These make units like Blob Squads (or any unit, really) so much better than they were. However, unlike a CCS that consists of 5 squishy models, Yarrick is a tough old bastard with a 4++, EW and gets back up on a 3+! He also has the IC rule which just begs to have him slapped into a blob squad. That means he both buffs his and surrounding units tremendously but also remains safely hidden in a comfy meat shield of Guardsmen. This means he is absolutely fantastic for Warlord denial to your opponent as he is hard to get at, out of harm’s way, hard to kill, and can come back if killed.

Yarrick also packs a decent punch. It always cracks me up how absolutely armed to the teeth the Old Man is. He has three different guns, two different melee weapons, and 2 different grenades. The dude’s ready for anything! This means he can take pot shots with his Storm Bolter, shoot someone with his laser eyeball, swing his Klaw in assault, or go old school and bust out his Pistol and CCW if he wants more attacks or to not kill his opponent to prolong a combat. He is also good in a challenge as his Power Klaw gives him good punch, and his EW, 3 wounds and 4++ (particularly backed up with some rerolls from the Blob Squad cheering him on) means he will typically survive to swing. His BS5 means he is a great choice for a Quad Gun or Icarus Las Cannon to compliment the weapons in his Blob Squad. That combined with his orders means he can be murder against flyers (Ignores Cover or Tank/Monster Hunter are brutally good on a BS 5 model).

Yarrick also keeps units from running away with his amazing Warlord Trait. Stopping units from taking break checks in a 12″ bubble from 25% casualties is just incredible. Low leadership IG units often run for it when they take casualties, but Yarrick keeps them steady to the last man. Even in assault, granting his Ld10 helps a ton to units he is not directly attached to. If his unit does find itself on the losing end of a combat, he can always opt to use his Summary Execution rule to auto-pass a failed test. As this rule only applies to Astra Militarum units, you can attach allied units to the squad without fear of getting a head shot from Yarrick to rally the men! An Inquisitor is an obvious choice here as they further buff leadership (Stubborn) and grant Divination powers on Ld10 in addition to their myriad other  benefits.

Be wary of attaching a Primaris Psyker to Yarrick’s unit though, as if they Perils, he will smoke them. I attach them to nearby units to benefit from his buffs, but to avoid his wrath! The other benefit of this tactic is that the Primaris will boost the Ld of their unit in regards to Orders.

Yarrick is an all around amazing HQ. While I think he is best used a primarily a buffing/defensive Warlord to boost the anvil portion of your list, he can be used in a more balls out role, leading Bullgryn, assault Blobs, etc. at the enemy. Yarrick is going to be leading many an AM list, and adding to his legend as a mainstay character in the 40K universe.

Here’s a video bat rep with Yarrick at the helm!

17 Responses to “My Homey, Commissar Yarrick”