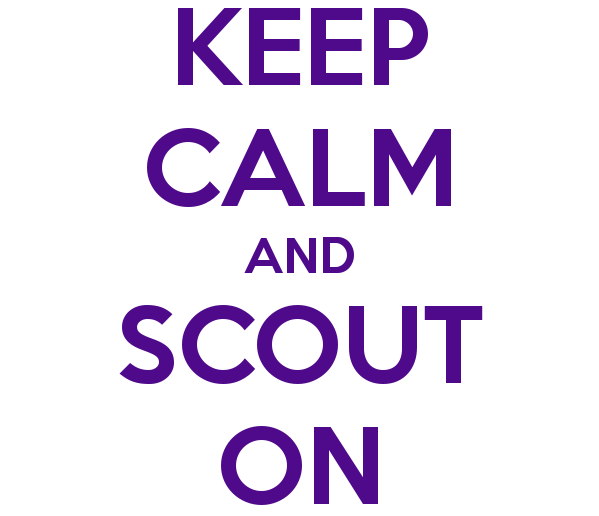 Hey guys, I’m Stephen (with a ‘V’ not an ‘F’, my parents didn’t phonics) and I play at The Gamer’s Haven in Spokane, WA. Last night I had the guys over for some beers and gaming and I played the first in a series of test games with a Dark Angels scout list. I stole the idea after I read Reece’s article about his Adepticon scout list and I thought the old Dark Angels could get it done even better! Check out the Tactics Corner for more bat reps!

Some caveats: I play Space Wolves with varying ally support, I’ve never been to a tournament (yet), and this game was my friend Will’s first game playing with his new Tyranid codex. In spite of all that I think the scout list would be a great way to play Dark Angels competitively and if anyone wants to steal this idea and take it to awesome new levels, I’d love to see it! Oh and if you like what you read, check out my blog here. I like to write about and discuss all aspects of the hobby. 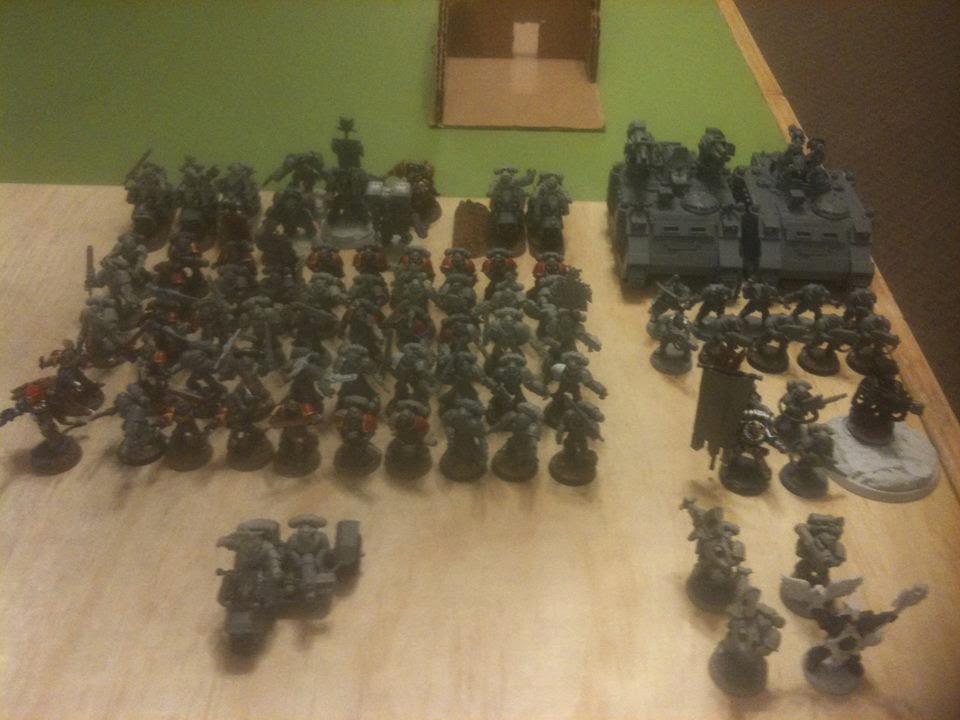 None of this is proxied at all. 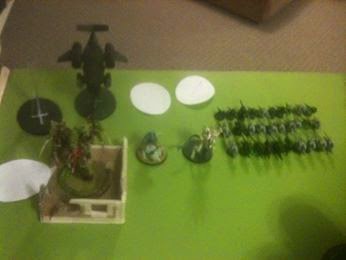 No proxies to see here.

Our Warlord Traits actually made a difference in this game. Will got Heightened Senses which let his bugs see in the dark, and I got Strategic Genius which let me re-roll my reserves. The mission we rolled up was Purge the Alien on a Hammer and Anvil deployment with Night Fighting on Turn One. Will won the roll-off for first turn and I decided to deploy conservatively and I didn’t use Coteaz to try and seize. Will kept his Tervigon and Gants in reserve and I reserved the Veterans, 3 Scout squads, and the Deathwing Knights. We’re goin’ in dry! 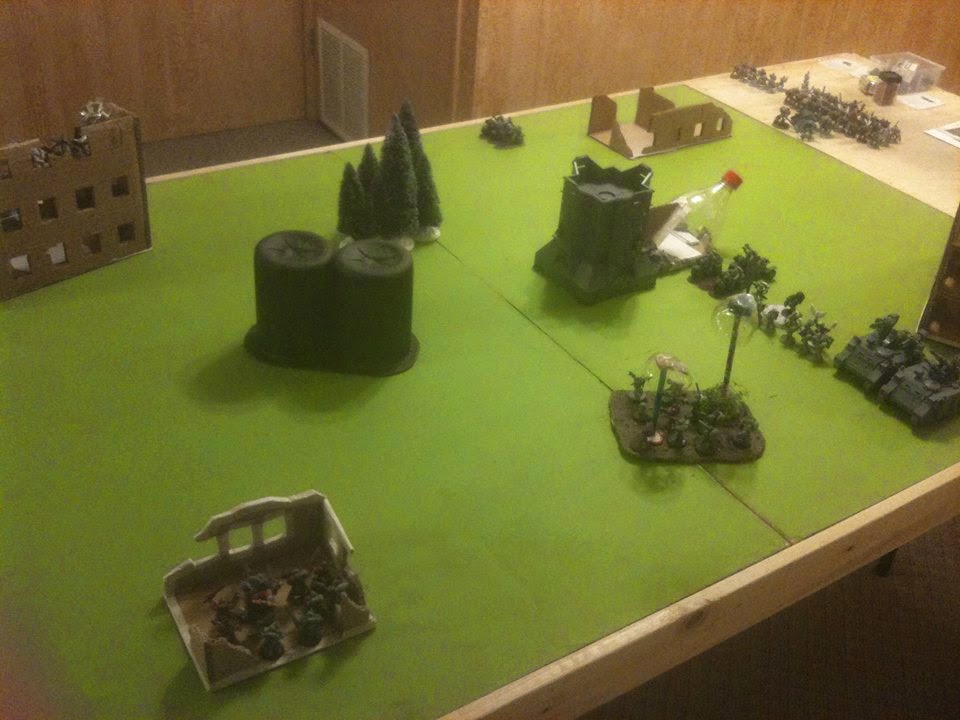 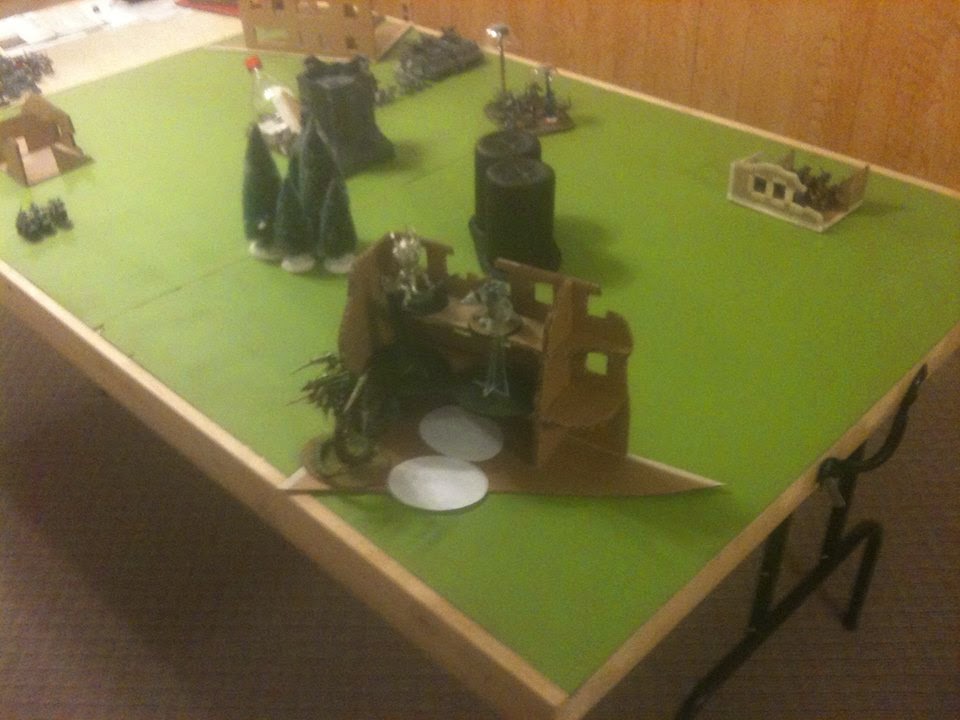 Here is what things look like before Turn 1 starts.

As you can see, I’ve laid a cunning trap for Will! He is using the LoS blocking terrain and the cover to keep his bugs hidden for the moment, but those scout squads over in the small ruins opposite all the bugs sure look tasty! I’m trying to lure him out where my little fire base can have a go at him while my bikers get up there and bring the pain!

On Will’s turn the Hive Tyrants move out towards the scout squad in the ruins but the Hive Crones decided to stay put in the building and stretch a little more before all the physical activity they’re about to put their old bones through. The Zoanthropes moved up taking advantage of the terrain to hide themselves from most of my fire base. The Tyrannofex moved out toward the lone squad of Black Knights coming down the right flank. The Hive Tyrants shot and scored an 8/10 on the Scouts in the ruins. To my surprise, the Zoanthropes were in range to cast a psychic blast power and completely erased my Ravenwing Command Squad and my Banner from the field. First Blood!

My turn. I backed off my remaining Black Knights from the Tyrannofex but kept them just within range to shoot him. I sent my Librarian off to hide in a closet and cry beside the Bastion for his fallen brothers and decided it was time to return fire. The CCS shot an artillery barrage and a mortar at the Zoanthropes and killed one. The Hydras shot at a Hive Tyrant, did a wound, and grounded it while the Scouts in the mushroom forest shot at the second Hive Tyrant and managed to ground it.

Turn 2. Unfortunately for Will, his Tervigon and his Termagants came on from reserve and moved on from his right side of the board. The Tervigon prematurely blew its load but it spawned 15 more Gants. Next time buddy! The Hive Tyrants moved up near the Scouts in the mushroom forest and the Hive Crones flew over beside the bastion. The Tyrannofex went off to play hide and seek behind the trees and the Exocrines moved out to get into range. The Termagants killed the remaining Scouts in the ruins and the Hive Crones and Hive Tyrants managed to glance one Hydra to death.

Two of my Scout squads and the Veterans came on from reserves and the Scouts outflanked. One squad ended up in my back field with the Veterans and one ended up on the hot side of the battle next to my fire base. I deep struck the Deathwing Knights at this point out next to his Exocrines. My remaining Hydra shot at the Hive Tyrant warlord and did a wound, but it took two full Scout squads’ shooting to ground it. Coteaz’s Perpetually Prescienced Plasma Cannon squad finished it off. The CCS shot and killed 5 Gants and the Black Knights put 2 wounds on the Tyrannofex. 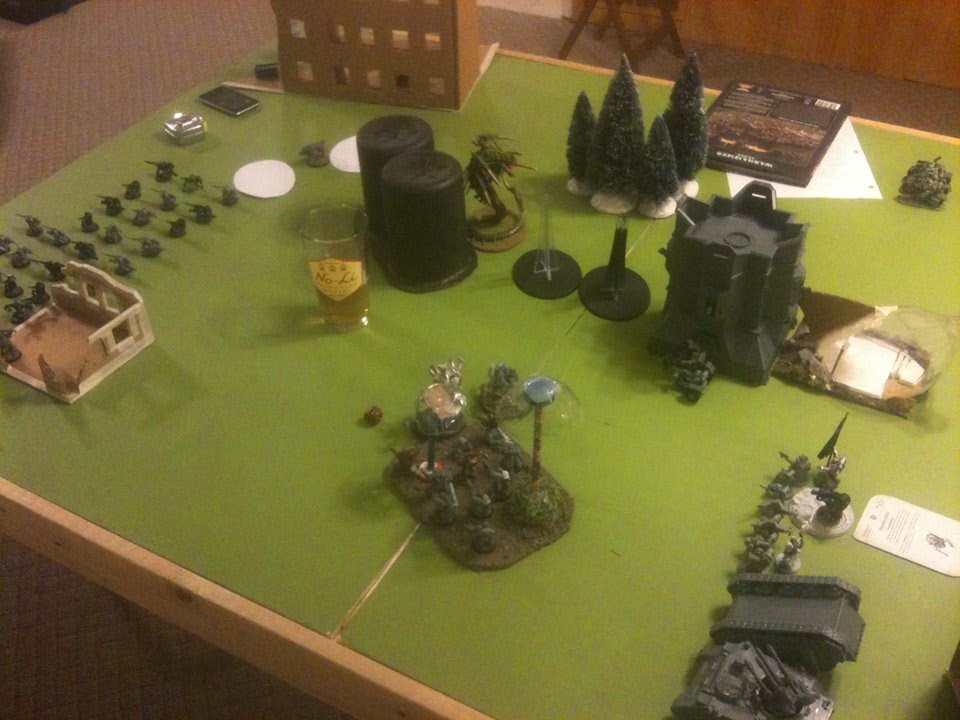 The Hive Crones and the remaining Hive Tyrant moved up to the Hydra and the Gants continued forward. The Hive Tyrant glanced the Hydra to death and the Exocrines and Zoanthrope shot at my Deathwing Knights but only killed one. I was rolling some hot 3+ invulns here. The Hive Crones drooled all over my Scouts in the forest and did a few wounds.

My last Scout squad came on and I moved the Veterans into the ruins on my back field. I shot all 3.5 squads of Scouts at the Hive Tyrant and did nothing. The Black Knights put 4 wounds on the Tyrannofex and Davey the Havoc, my emo Librarian, managed to get off Psychic Shriek and killed the Tyrannofex. Coteaz’s servitors and the CCS shot and blew up another 11 gants. The Deathwing Knights assaulted an Exocrine and dealt 4 wounds to it. The Hive Tyrant flew off the board and killed two scouts with a vector strike. The Hive Crones followed and killed another 4 scouts. The big squad of gants charged into combat with the Exocrine and the Deathwing Knights but the Knights put down the Exocrine and killed 4 Gants.

Davey the Havoc moved to the back field to try and deny a warlord kill. The Ravenwing moved up to fire at the remaining Exocrine and my weak Scout squads moved as fast as they could to the back field to try and deny some kill points while I moved the strong squads up to replace them. The CCS and Coteaz’s squad shot at the spawned Gants killing all but one of them. The last one ended up running off the board later. The Ravenwing shot at the Exocrine and put 2 wounds on it. My Deathwing Knights squished some more Gants.

I didn’t move anything at this point (which was a mistake) because I thought the game was pretty much over, but my Deathwing assaulted and killed the last Exocrine. To my surprise, the dice said the game was to go on. Turn 6 and 7 was a mad rush to get/deny as many kill points as we could. Will managed to rack up another 2 during this time. The final score was 8-6, a Dark Angels victory.

I definitely liked playing this list, it has a lot of versatility for an almost pure infantry/foot army and its dramatically different from what I normally play. It took a little getting used to though and I think its power was hampered by the deployment and the kill points mission. Not going first threw me off a bit too and I had to quickly come up with a second turn strategy for an army that is designed to alpha strike. I’m sure I’ll get better with it the more I play it but I’d love to hear your feedback, suggestions, and comments. Let me know what you think! A big thanks to Will for playing last night, it was a great game and we both learned a lot.