Reecius here from Frontline Gaming to discuss the list I was going to play at Adepticon: a competitive Scout based army. As always, check out our Tactics Corner for more great tactics articles!

I love Scouts. They are one of my favorite part of the 40K setting. Space Marines are iconic, awesome shock troopers, but the stealthy SpecOps style of the Scouts always appealed to me more. I like the idea of units of highly trained Scouts operating behind enemy lines using guerrilla tactics and trickery as much as brute force. I have always wanted to play a Scout army but as I am primarily a competitive player, that has always been tough to do as Scouts tend to struggle a bit in that regard.

However, in 6th ed a lot of factors have changed in the environment of the game to alter this.

For one, being a Space Marine doesn’t count for a whole lot anymore. Your basic Marine who in the fluff is depicted as shrugging off almost any damage, die in droves in the face of the firepower of most factions in the game. Unless taken en masse, Marines will drop like flies to concentrated firepower. Heldrakes, Riptides, Broadsides, Grav Centurions, etc. all make you pick up your super space warriors by the handful. Don’t even bother comparing them to Deathstars, whose points efficiency is so out of whack with their points cost as to be comical.

That is where the humble Scout comparatively rises in value as their lower point cost but similar abilities and stats mean that while yes, they will also die in droves, you are losing a smaller percentage of your army per casualty. So, assuming that you accept my first premise that a Marine really isn’t that durable anymore, Scouts are more points efficient defensively than Tactical Marines. Meaning, an equal amount of points spent on Scouts will typically last longer and be more durable than an equivalent amount of points spent on Tactical Marines. 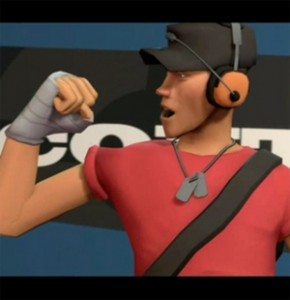 Tactically, Scouts also offer you a LOT of utility in great USRs. They have (obviously) Scouts, which is great for the pre-game redeployment. They also have Infiltrator which when combined with Scouts, means they can start 12″ away from your opponent which is HUGE. You save points on transport vehicles and start out in a position to inflict maximum damage right away. It also means you get to deploy after seeing where your opponent deploys, even if you are going first which is also a big advantage. Both of those USRs also allow you to Outflank for further deployment flexibility. Scouts also have Move Through Cover to keep them quick in broken terrain and the all important And They Shall Know No Fear. Probably one of the best rules in the game. Finally, Combat Squads means you can double your number of scoring units if you desire to do so. I Combat Squad my Scouts almost every game. The reason why is that not only do I have more scoring options but also due to the fact that in the face of all of the units in the game that can obliterate 10 Mariners in a single attack with ease, splitting your units into smaller sizes effectively halves the amount of potential kills your opponent can get in a single attack. It also doubles the amount of units you have for things like soaking up Overwatch (declare a multi-charge with a sacrificial unit to clear the way for their comrades), force Grounding Checks, etc. MSU is also great to counter Deathstars as they can often only kill one unit a turn and if you present them with 20+ cheap units, they will run out of game turns before they can take out all of your assets.

Offensively though, there is no question that Scouts don’t compare to Tactical Marines. They have lower BS and WS and fewer options for the special and heavy weapons which end up doing most of the damage in a unit of Tactical Marines. They do still have Frag and Krak grenades which are HUGE for these little guys, particularly now that they can be thrown and work on Monstrous Creatures in assault. However, Chapter Tactics is what really helps the Scouts. Chapter Tactics like Hit and Run from the White Scars makes assault Scouts so much better. 6+ FnP from Iron Hands, etc. all help to give Scouts a nice boost. The one that grabbed me through, were the Sentinels of Terra Chapter Tactics (Imperial Fists supplement). They get a number of benefits, but the primary among them is Close Ranged Bolter Drill which let’s you reroll misses at half range with Bolter Weapons. That is SO GOOD. Scouts go from a 50% chance of hitting to 75%–better than a Space Marine. You also get other nice benefits like Devastator Centurions in Elites, freeing up your important Heavy slots, but the main bonus is the twin linked Bolters.

When you combine that with their advanced deployment through Scouts and Infiltrating, you can get into double tap range turn 1. What this means is that if you go first, you get to see where your opponent deploys, counter deploy your Scouts, and then hit them with 120 twin-linked Bolter shots as your opening salvo. It is absolutely brutal. On average dice, that is 45 wounds to T4 targets. I have wiped out Deathstars on turn 1 with these little bad asses in practice games. The look on the other guy’s face when their Deathstar gets vaporized by Scouts is worth making the army alone! 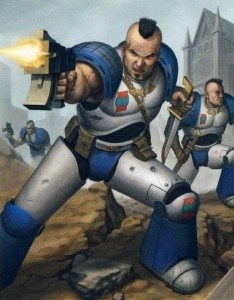 The combination of deployment options, defense through numbers (MSU tactics), ATSKNF to ensure you are a threat to the last model (and I often have a single Scout fall back after his unit gets damaged to go camp an objective and remain a vital tool to me), grenades to hurt nearly any target, Combat Squads for flexibility and twin linked shooting to shred infantry, MCs and to ground FMCs has proven to be an excellent combo that is also a blast to play.

My list starts with 6 units of 10 Bolter Scouts, Melta Bombs on the Sarges, and a Heavy Bolter (also twin linked at half range). The nice thing is that these units are dirt cheap, too! Only 123 points a pop that gives you potentially 12 scoring units!

From there, you have a lot of options to fill out the list. I have tried a ton of variation but I have found that Coteaz is essential to stop the seize if you go for the Alpha Strike. I typically bring another 3 units of Henchmen for a crazy 15 scoring units to overwhelm my opponent’s ability to stop me from winning objective based missions.

From there, you can fill out your list with some support units. I go with 2 Stalkers for AA. I prefer these to Storm Talons as they start on the table and give you better defense and kill power against FMCs which are harder for me to deal with than true flyers. I take a T-Fire Cannon to give me that all important Barrage weapon, and a unit of Bikes with Grav Guns for AA and AMC that the Scouts can struggle with. I also take a hard hitting unit in a Drop Pod to add additional pressure turn 1. Often this will be Sternguard or Grey Hunters with a Rune Priest to provide Jaws and a 4+ to deny powers in their backfield, possibly with some Long Fangs for ranged firepower. The other nice offensive bonus the Scouts bring is that they can dog-pile on MCs to pin them down and wear them down with grenade attacks. I routinely dog-pile Riptides, Wraithknights, Imperial Knights, etc. and eventually destroy them but more importantly, take them out of the game for several turns.

My Warlord is a Telepathy (usually) Librarian on a bike.

From there you can fill out the list to suit your taste, but that covers all of your bases. 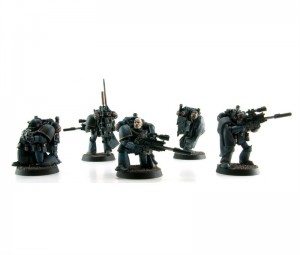 So far, the list has done extremely well for me against very competitive lists. I have taken down 4 Riptide lists, 3 Riptides with Missileside support, Seercouncil with Servo Skulls, Centurionstars, Serpent Spam, White Scars Bikers and Daemons. I have lost 3 games so far, 2 of them came to the last roll of the dice. 1 was against a TAC Marine list that seized on me when I had deployed for the Alpha Strike (and even taking a massive hit turn 1, it still came down to the last armor save of the game). Another loss came against Taudar where I made a tactical error and lost a close one. My biggest loss was against FMC heavy Tyranids where I went for a huge risk to win the game early that didn’t pan out, leaving my exposed and I ended up losing by a large margin. However the vast majority of my games, the massive pressure the list puts on and sheer volume of dice it throws out is too much for most players to handle.

You also have to be careful in Kill Point missions. When you flood the field with units, you are playing at a disadvantage in these missions. They aren’t insurmountable by any means, you can choose not to Combat Squad, but they are the hardest mission. So long as you play in an area where they follow the book ration for KP missions (1/6) and the missons are layered to allow multiple paths to victory, you can play around that set-back with clever tactics.

The army is also very flexible. If you don’t go first, you can scatter and play to objectives. If you find yourself facing counter-infiltrate tactics, it actually isn’t that bad. I find that I can slip between gaps in the Servo Skulls or just deploy behind them in the enemy deployment zone if they aren’t very careful with model placement. Either way, your ability to put a big chunk of your army anywhere on the table forces your opponent to change their normal deployment strategies to react to you.

Most importantly, the army is fun! I love the Scouts running around and my opponents enjoy it too as stuff is dying left and right. I really enjoy playing it and think I will stick with it for the rest of the year in tournament play. I think you can play it with Assault Scouts, too, if you want a different spin on the theme and try it for yourself.