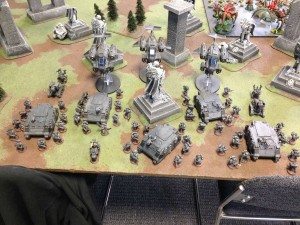 Cyle Thompson is here to relate his best general performance with Ravenguard at the Dark Star GT, an 1850pt, 74 man event! As always, check out the Tactics Corner for more great tournament report. 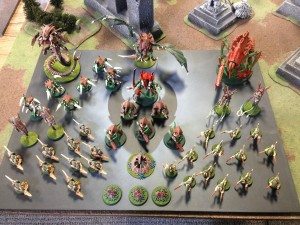 Game 1: ‘Nids.  Flyrant, walking Hive Tyrant with guards, 3 shooty hive guard, Tfex with S10 gun, 2 venomthropes, 2 zonethropes, ~40ish gaunts in 3 squads, 6 Raveners. He deploys in a block to my center-right.  I scout hard to the left, he goes first.  He doesn’t do much turn one, stripping a few hull points and moving up the raveners and the flyrant centrally towards my thunderfires. I go melta down a few raveners, then charge them with the chapter master, wiping them out and put two wounds on the flyrant. He goes knocks out a rhino, shakes another but doesn’t land his flyrant. I go and only one of my fliers comes in (and I had to use my 1/game reroll to make it happen) but I kill the flyrant and move forward setting up bolter fire into gaunts.  I thin the herd out and drop my orbital bombardment on the pack killing both zones, a venom, and a hiveguard.  He goes and does some minimal shooting and is setting up some charges but nothing makes it.  I go finish off a gaunt squad, his hive guard, his venom, and fail a charge into his now solo hive tyrant.  He goes moves onto objectives with the remaining gaunts, blows up a rhino with the tfex and charges into my chapter master with the tyrant.  The chapter master punks him out on his turn.  I go, clear the gaunts and charge the tfex (who is the only model on the table) and kill him on the top of 5. 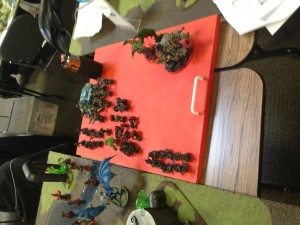 Game 2: CSM. Huron (rolled 2 infiltrating units), 35 cultists, heldrake, landraider with 10 marines, 2 rhinos with 10 marines, maulerfiend, 5x spawn.  He went first, infiltrating forward to get the relics and got both of them with the cultists.  The spawns and mauler come up and open a rhino.  I go, dump some thunderfires into the blob but down do too hot since he rolled the FNP power.  Eventually I said fuck it, dropped the orbital bombardment on Huron, did 3 wounds, he failed LoS and his Invul. I charged in anyway and took out the champ and had them wrap up.  He goes and the mauler and spawn catch some marines and the landraider blows up a rhino that pushed forward and the dudes inside get charged. His dragon came on and roasted a squad. I go, do not blow up the dragon with my airplanes, instead just doing a hull point. I kill the mauler, demech and pin some marines and force some wounds on the spawn and then blow up the dragon with a snap firing multi melta. He goes and does some damage, some cultists walk on and his spawns break out and his cultists run but don’t get swept.  I go, kill a group of marines a turn with the chapter master (challenge out the power fist, sweep them on his turn), grind though the spawns with thunderfires and airplanes then focus down the cultists who walked on.  At the end he had 2 marines from an outflanked rhino at the top of 5 and I went second. 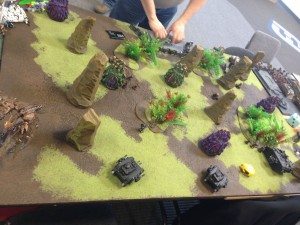 Game 3: Black Templar. Chapter master with thunder hammer termies in a crusader, 2 laspreds, 5×5 lasplas crusader squads, 2 deep striking MM landspeeders, stormraven.  This guy actually beat my teammate’s seerstar because he didn’t roll fortune.  I go first, scout up on him which blew his mind how far I could get up, move six, hop out six, and blow up a pred and put some wounds on marines. He has to spend several turns getting his thunderhammers into position while I chop/shoot though his back line and keep him hemmed in from the objectives.  My chapter master died pretty early after he swept a squad and got plasma’d down but other than that it was me having multiple bubble wrapped marines standing on objectives. This was my scariest game because killed non-hq non-vehicle units would go into normal reserves and would walk back on.  If I pulled riptides or wraithknights here I would have got owned. But most of his shooting was in tanks so I just had to pop them and I won.

Day 2 Game 4: Necrons. Zandrack, Oberon, 3x Spiders, D. Lord all hanging out, 2 A. barges, 3 airplanes, 3×5 wraiths.  Another weird match where the objectives didn’t matter and it was a “nominate and kill one unit.” When I play tested I figured it would come down to first blood.  I was right. He lets me go first and I scout left to unload on the wraith unit I nominated and kill it. He goes and catches the CM+dudes in combat with his D.lord who split off and takes out a few rhinos.  He failed a ~6” charge with the spiders/Zandrack/Oberon block into my dudes out in the open. I go and my airplanes come on hovering and kill another squad of wraiths while I shoot the deathstar to pieces. He goes and uses wraiths to catch my rhinos that are in his backfield and opens them up and assaults the contents, the deathstar open another rhino and kill some marines. My CM and the one dude he was hanging out with (meltagun) break back 11. I go shoot down an airplane and start working the deathstar getting everything down to one wound. He goes, shooting down all 3 airplanes and charges the CM with his D.lord who dies to overwatch meltagun. I go have the CM bailout the unit that got charged by the deathstar, challenge out oberon, he loses combat and they get swept.  He throws in the towel on 4 since he looked over the mission and realized he could not win.

Game 5: Eldar. Block of guardians, 2 lances, 2 farseers, 2 wraithknights, 2 waveserpents, 3 warwalkers, 2 jetbokes, warp spiders and another block of guardians in reserve. This was a “kill all of your opponents HQs.” I went first and scouted up, put 4 wounds on a wraithknight, and pinned the guardian block. He goes kills a couple squads of marines (I didn’t realize he had the plasma cannon thing). I go, kill a wraithknight, thin out the guardians, and pull a gun off of a wave serpent. I charge the guardian block with the CM and don’t do well because he kept declining challenges and kept making leadership 7 saves. He goes and tries to shoot down the airplanes not doing much and the wraithknight gets stuck in combat. I kill his wave serpents, then his spiders, then his warwalkers, tank shock his second guardian block off the table, when they come on and I add more dudes to the guardian fight. Eventually he bails out the guardians with the knight and kills my CM on the bottom of 4. Top of 5 I position everything to nuke his 2 farseers and double them out with the thunderfire. He threw in the towel since I had linebreaker and 3 table quarters (the second mission) and all he had was the wraithknight with 4 wounds and a unit of bikes, while I still had the majority of my shooting available.

Awesome job dude! Loved to see my beloved Ravenguards still able to rock it in this edition.

I was literally just telling someone on Dakka that Ravenguard Rhino spam was going to win a GT soon.

Thank you for making me a psychic. Oh, and congrats on your win!

I’ve been running a Rhino rush list with Ravenguard here at the shop and done quite well with it, too.

Hey awesome work Man! Our group all placed in the top 15! Representing Grand Cities Games like a pro.

Huh. I wonder if my old Rhino Rush Blood Angels would fair alright? Blood Angels Rhinos are so freaking fast. I’ll have to bring them out again. Especially with Baal Pred support and some Death company in a Drop pod.

Good job man! Love that you went heavy on the tac marines. I think people underestimate tac marines these days. What was integral to your list? It seems like your support units did a lot of heavy lifting. Also..how did that Chapter Master fair? Seems like he went and stomped through a whole lot of enemy units without being brought down!

I’ve been using Rhino Rush lists and doing very well with them. You should try it out.

Yeah I think I will. Assault Marines are so lack luster with out old school furious charge. I’d rather be able to roll up on an objective crazy fast, hop out and dakka dakka. Or just hide in my tin cans 🙂

THe big thing that I think alot of people miss is the power of that much Scout in an army. Those Mulit-Meltas can all be setting in range on turn 1 with ease and if you need to you can be in people’s grill (if your going first) literally standing on their Deployment line on turn at the end of turn 1.

By the way, Stormtalons do work on these new Nid FMC’s. The Flyrants are a bit harder Crones get eaten by AP4.

Yeah, Storm Talons will obliterate Crones and Harpies, but, a Crone will do the same to a Storm Talon. It’s all about who goes second!

You basically summed up 40k right there, lol. Game might as well be called “second turn wins” I wish 3 hour games were feasible at tournies, that would fix some of the 2nd turn advantage.

True story. I go second damn near every game, except with my new list. With that, iborefer first turn.