Raw Dogger on Corbulo. Reader be ware! Raw Dogger is rude, crude and funny as hell, just be aware that he writes for an adult audience. As always check out the Tactics Corner for more great tactics and videos. Also, check out raw Dogger’s blog, Kimchi Games for more of his antics!

Long time no talk, drunken readers!  Apologies but life has once again reared it’s ugly head and I’ve been unable to fit in gaming hobby time as of late.  I wanted to quickly talk about one of my go-to models when putting together a Blood Angel’s army in 40k 6th edition, the ultra-hunky Brother Corbulo. 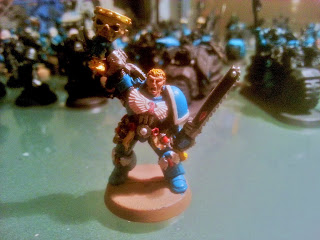 Corbulo is is the High Sanguinary Priest of the Blood Angels.  He’s basically an Apothecary that gives off a 6″ Furious Charge bubble and comes in at the price of a Librarian with a Melta Bomb.  He basically has the stats of a Space Marine with one less Wound and Weapon Skill.  Corbulo also comes with a couple of war gear items and a special rule that rocks a lots of cocks [citation needed].

Heaven’s Teeth:  A chainsword that gives Corbulo +1 Strength (5) and has the rending special rule.  Seeing as how he come with 4 attacks base and he is usually hitting on 3’s you have the potential to do some damage to high armor foes or medium armored vehicles.

The Red Grail:  As stated above, Corbulo is an Apothecary that grants any unit within 6″ of himself Furious Charge and Feel No Pain.  As an added benefit his pimp chalice grants Corbulo a 2+ Feel No Pain.  Awesome pizza sauce.

The Far-Seeing Eye:  Once per game Corbulo can use his super powers to divine the strands of fate.  What the fuck does that mean?  He lets you re-roll one dice per game.  This can be any roll of the dice, including the role to seize the initiative.  This has gotten me out of a jam more times than I care to admit.

So, now that you know about this hunk how the hell do you use him?  I’ve been having a lot of success plopping him down in a Drop Pod with a unit of Sternguard with combi-plasmas.  He sits in front of the unit and tanks wounds with his 2+ Feel No Pain while the Sternguard do what they do.  Corbulo isn’t too bad in combat and gives the unit a 5+ Feel No Pain and Furious Charge bonus, which is great for the Get’s Hot nature of combi-plasmas.  Another great way to use him is in a Storm Raven with a unit of Thunder Hammer/Storm Shield Terminators.  They will hit like a ton of bricks and if the 5+ Feel No Pain really helps if the damn funky chicken explodes before they get to their destination.

All-in-all Brother Corbulo really helps the struggling Blood Angels in the 6th edition.  So, what are your coolest moments using the hunky Hercules?

8 Responses to “Raw Dogger on Corbulo”