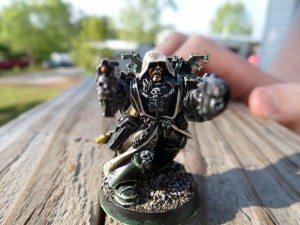 Cypher. One of the most iconic and enigmatic characters in the 40K mythos is back on the table with a set of rules via a Data Slate. As always, check out the Tactics Corner for more great tactics and videos!

So who is Cypher anyway and why should you care?

Cypher is the most mysterious of a mysterious sub-sect–the Fallen–of a mysterious chapter: the Dark Angels.The Fallen were those Dark Angels that during the Horus Heresy turned to Chaos. They were ultimately defeated and the survivors were scattered through space and time forever to be hunted by their loyalist brothers.

Cypher, as his name would suggest, is an ambiguous character whose true motives are a mystery. He carries a blade that is believed to be the Primarch Lion El’Johnson’s own blade but for what purpose is unclear. He never draws the blade either, but instead uses his twin pistols, john Woo style!

Whether he exists for good or evil is unclear and he can be seen working with and pursued by forces from all corners of the Imperium. He seems to have a destiny of some sort and always stays one step ahead of those who would capture him. No matter what his true purpose may be, he is undeniably cool!

As for his rules, well, he is alright. He himself isn’t much of a powerhouse but he is a serious force multiplier.

The other cool thing about him is that he can be taken be a LOT of armies! Space Marines of all flavors (except Dark Angels, duh!), Inquisition, Sisters, IG, Chaos Space Marines or Grey Knights. He gets around! He is also not a cheap date, weighing in at 10pts less than 2 Thunderfire Cannons.

He is included in the primary force org but does not take up a slot, and can never be the Warlord and further, he lowers the Warlord’s LD by 1. Interestingly though, as pointed out to me by Adam from the Dice Abide, this seems to cancel out with VtotLW, so you could still have a LD10 Warlord with Chaos.

He has impressive stats. Think a Space Marine Captain but with WS7, BS10 and I8. Pretty solid. He does not however, have an invul save. Boo. That means he is fairly squishy, even with EW.

He does though, have an alphabet soup of special rules!

Soooo yeah, wow, he has a lot of special rules! But, before we go further, let’s cover his wargear, too.

Cypher has a lot of rules and wargear which means he has a lot of depth and potential combos but also is a bit confusing. His rules pretty clearly reflect his fluff though, which is cool. He is a dual pistol wielding, shadowy, slippery character. His pure damage output is middling at best though, for his price point, and he is a bit of a putz in close combat but that isn’t why you take him. You take him because he adds so much to a unit he joins and because his “out of the FoC” status opens up a ton of combos without having to commit to an ally. For example, you could use him to get H&R without having to take White Scars as an example.

Cypher is a classic force multiplier. With Infiltrate (which most tournaments do interpret as transferring to a unit the IC joins), Shrouded, Hit and Run, ATSKNF, increased overwatch defense and decent firepower, he really buffs a unit. By sticking him in with some heavy hitters either in a dedicated transport (Rhino, Land Raider, etc.) to outflank or on foot to Infiltrate forward, he really increases the options with deployment.

Hit and Run at I8 also means that he has great odds for keeping himself and his unit mobile and hard to hold in place in an undesirable combat. Shrouded is a nice defensive buff too, when it works.

His shooting is OK, nothing too crazy and his HtH is actually pretty crappy, even with his ability to shoot the Plasma Pistol a few times in combat. Lacking an invul save really hurts, even with EW.

Where I see him really kicking ass though, is with a unit like an IG Blob Squad, big unit of Sisters, Paladins (or any big Grey Knight unit, really) or, especially, a big unit of Chaos Marines of some variety. Where IG can team up with White Scars and get almost all of the same benefits for less points, Chaos really lack a lot of this. Huron can do some of it, in some ways better, but Cypher brings ATSKNF and DOESN’T have the retarded Champion of Chaos rule that hamstrings CSMs so much. He allows a unit to reliably advance up the field, hit and run out of crappy combats, not get run down, and perform much better in general. They essentially become loyal Marines. Yay!

I would take a unit of 20 CSMs, possibly with Bolters and CCWs, 2 Special Weapons (probably Plasma Guns), and Cypher. That becomes a very reliable scoring unit that has good firepower. Cypher+2 more Plasma Guns compliment one another well, and his Bolt Pistol compliments the Bolters. The unit has lots of deployment options, won’t get run down, is mobile, shrouded and in general does everything CSM do, better.

The unit typically doesn’t want to be in assault, but if it does get there, it won’t get run down, can absorb some casualties, and then has great odds to get out of dodge after.

Or, I would take him in a unit of 10 Paladins or GK Termies to give them all of his special rules and slight increase in damage output. H&R + Infiltrate +Shrouded on 10 Pallies with Draigo is gross. In the same vein, he with 6 Centurions and a psychic buffing unit is equally gross.

Plus, secondary buffs and combos such as taking him in a SM force and then allying with Tau, for example, opens up a host of new craziness such as attaching him to a Riptide, or Broadsides, etc. Taking him with another model that grants Stealth is also a crazy way to buff units. Rules interactions like this will yield really crazy top end power combos that will take time to discover.

That said, is he worth it? Eh, for his high points cost, low durability and fairly limp-wristed offensive power, probably not in a truly competitive list. However, I think that with all of the potential rules interactions you could pull out of your hat with this guy there may be some surprises in there we aren’t seeing yet. Plus, if you want to take CSMs that actually do something besides suck terribly, he can help a lot. He and Huron Together could make for some pretty interesting lists, actually, that could be surprisingly powerful. As stated, he also makes already powerful units even more powerful, which can be fun but it comes at a high price point.

I think Cypher is a fun, characterful model that lacks the punch to be considered truly powerful.

← Why We Game
Can Orks Still Compete in the Current 40K Meta? →