Ryan “The Betrayer” is back with part 4 of his ongoing Warmahordes starter article series! Be sure to check out the Tactics Corner for more articles and videos, and to leave him some feedback! 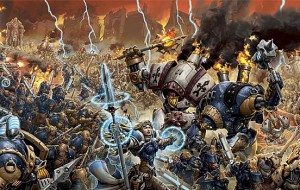 This is the fourth article in a series of eight that will cover:

A defining characteristic of Warmahordes as a competitive (and casually fun) game is the steamroller packet.  Privateer Press produces the steamroller scenario packet once a year; steamroller 2013 can be found here (http://privateerpress.com/organized-play/steamroller-tournaments).  Warmahordes is meant to be played with a scenario; the game can be played without one, but it’s not as good.  A scenario simply sets out a set of objectives, zones and/or flags to be controlled and/or destroyed through the game.  Control and/or destroy enough and you can win the game.  Scenarios are very easy to set up, so all but the newest of new players should be playing with a scenario every game.  The annual set of steamroller scenarios is a really smart way to approach the game, because the way a game plays out is dependent on the scenario and the ability for Privateer Press to change that up every year is great.

One thing that is often discussed in 40k is the amount of terrain on a table; specifically line of sight blocking terrain.  Want to nerf gun lines, use los blocking terrain.  Well, Warmahordes sort of does this via scenarios.  Scenarios are often designed to force players to have a presence in the center of the board.  If you want to sit in your deployment zone and shoot people, well you will lose on scenario, as scenarios are counted at the end of each players turn and not just at the end of the game.  Scenarios can even go as far as to reward and punish army composition.  Some scenarios benefit the players that wants to spread out, others benefit a small brick army, as an example.

The Steamroller format is used in both small local events and at large national conventions.  The steamroller packet above has some different options that are included and adopted to make for a slightly different event.  A standard steamroller event will require two army lists, but sometimes three lists are used.  Another format known as hardcore requires just one list and your army MUST be fully painted.  Hardcore is specifically interest because there are four winners to the tournament, each for being the best in a specific are in the tournament.

Competitive Warmahordes on a national level occurs across many large tournaments and conventions around the country.  An important thing to know about Warmahordes events is that they feature multiple tournaments.  A three day con will generally have about six tournaments and organized casual play.  This makes Warmahordes events a lot of fun for both competitive and casual players.  Casual play is usually organized around the “Iron Arena” and this format awards players points for playing casual games.  At some point during the con, a player can exchange points for prizes.  Regarding the tournaments, the fact that there are multiple events also allows for great variety.  If you really like a specific format, you can play in just that and then Iron Arena for the remainder.  If you are just a super competitive player, there is a main event on Saturday and usually a Master’s even on Sunday.  For a Master’s tournament, players must qualify by placing well in one of the tournaments earlier in the weekend.  The winner of Master’s is said to win the event.  Think of it like playoffs after the regular season. Some of the larger events are as follows:

Templecon occurs in February in Rhode Island… yup Rhode Island in February…  Despite weather, Templecon is the first event of the year and has been a VERY popular spot for competitive Warmahordes.  Privateer Press attends the event and often makes announcements for the upcoming year at this event.

Lock and Load is held in Seattle in June and is hosted by Privateer Press.  This is their con and they do a great job.  While there is a ton of Warmahordes to be played here, this is the best con to attend if you want to learn more about fluff, painting, modeling or just anything in and around the game.

There are a ton of other events other than the above, but they are the primary events.  Big tournaments can also be found at: Las Vegas Open, Nova Open, Adepticon, Kingdom Con, Gencon and Wargamescon, among others.  A good place to learn about events is the Warmachine Weekend website where they show what events are qualifier tournaments.

Posted on November 30, 2013 by Reecius in Editorial, Hordes, Warmachine