The Betrayer Speaks: A Warmachine and Hordes Starter Guide Part 3

Ryan “The Betrayer” is back with part 3 of his excellent Warmahordes starter series of articles! As always, check out the Tactics Corner for more articles and videos! 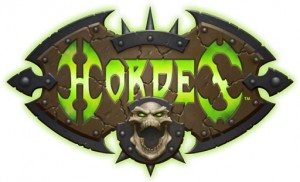 This is the third article in a series of eight that will cover:

Hordes is based around Warlocks, warbeasts and the fury mechanic and contains the following factions: Circle Orboros, Legion of Everblight, Skorne, Trollbloods and Minions.

Warlocks use “fury” which is sort of the inverse of focus.  Focus is generated by the Warcaster every turn and then allocated to warjacks.  Fury is generated from warbeasts every turn and allocated to the Warlock at the beginning of each turn.  Fury can also be used to cast spells and if not used, a Warlock’s fury may be discarded to transfer damage to a warbeast instead of the Warlock taking that damage.  Given that fury is generated by warbeasts, it tends to be a much more plentiful resource than focus.  Given the strength of fury, Hordes runs a lot of warbeasts compared to Warmachine and warjacks.  Many Hordes lists will run 3-4 warbeasts and will go higher on a regular basis.  So, if you prefer the strength of a few ferocious beasts at your side, then Hordes is for you! 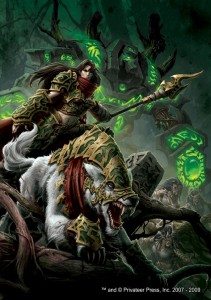 Circle Orboros is a faction of Druids, wild persons, stone golems and werewolves.  Circle is also the tree-hugging faction, so if you are into that sort of thing then read on.

Circle is a very fun faction to play, especially if you like a highly mobile force that is not predictable.  Positioning against Circle is rather difficult, because you never know where exactly their models will go and where they will end up.  Circle’s great movement comes from their generally high speed characteristics, their ability two teleport from the aid of shifting stones and a few spells that further augment movement.

Circle is a bit of a glass cannon faction, but not too bad.  They do hit hard and they can be hard to hit, but once you get your hands on them, it’s bad news for Circle.  As a faction, Circle’s strength is in its warbeasts, though they do have some very good units to round out the faction.  All in all, Circle is a lot of fun, very mobile and melee oriented. 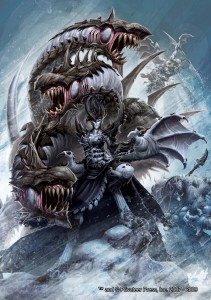 As part of the larger Warmachine and Hordes story, there are various dragons that exist and in this world, the dragons are able to taint the land and its inhabitants near to where the dragon is.  Well, the dragon Everblight decided he wanted to hang out near a group of elves call the Nyss.  Nyss + taint = Legion of Everblight, the blighted dragonspawn faction.  Yup, dragons, you like dragons, don’t you? 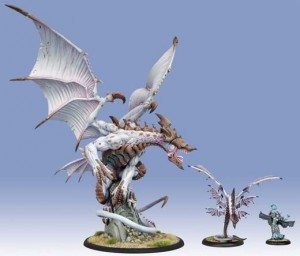 Legion is a very popular and very good faction.  They are also up there with Cryx as far as being one of the factions that everybody loves to hate.  As a faction, Legion, like Circle, is a bit of a glass cannon and tends to be rather quick on the table.  Unlike Circle though, Legion packs a lot of range attacks, in addition to a solid melee game.  Legion can shoot with both their warbeasts and their infantry.  Legion does tend to rely more on its beasts than its units, so look to them as the general backbone of a list.

A defining characteristic of Legion is in two abilities that can be found on their warbeasts: pathfinder and eyeless sight.  People often tend to summarize these abilities and says that “legion just gets to ignore the rules of the game.”  The 40k equivalent of these abilities would be move through cover and the ability to ignore cover.  With a very solid range beast in the ravagore, eyeless sight becomes an amazing ability and with a great melee beast like the scythean, pathfinder helps them cover more of the table. 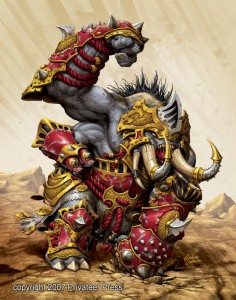 The Skorne Empire lies to the east and is largely a desert based faction that values the strongest of warriors as its leaders.  The Skorne also make good use of slave labor and driving its warbeasts to be absolute monstrosities in combat by abusing them.

Skorne can make good use of infantry, but the faction really finds its strength in its warbeasts.  Additionally, Skorne has one of the two strongest units in the game in their beast handlers; they rea the reason that Skorne beasts are dialed up to 11.  The bronzeback is widely considered to be the hardest hitting model in the game and is one of very few models that is likely to kill a huge bas model in one round.  Skorne also manages its fury very well, which allows the faction to use a lot of beasts in a list.

Skorne is largely a melee faction, though they do have some access to guns.  Skorne is also a fairly durable faction and has the best base defensive stats of any heavy warjack or warbeasts in the game (non-character).  This durability and the hard hitting nature of the faction gets the job done once they get there. 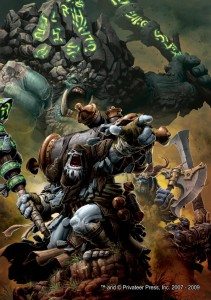 Trollbloods are one of the most appealing factions visually.  A troll player will often tell you they picked the faction for the models; it’s a great line.  Beyond the models, Trollbloods tend to be a balanced faction offensively and possibly the most durable faction defensively.

Trolls are unique as they are a medium base faction, are all tough and tend to have more hit points than their counterparts in another faction.  Trolls also have the Kriel Stone, which provides an armor buff to anybody within some distance to the stone.  This all combines to create a very durable army that is not particularly fast or maneuverable, but knows how to take one to the chin and then still be able to punch back.  Watch out for those tough rolls, sometimes they skew one way or the other and it can really change a game.

Defense aside, Trolls pack a fair punch as a faction and tend to rely on stacking buffs to help get the job done.  Troll animi are great for increasing offensive capabilities, whether the need is infantry clearing or the removal of a heavy, their animi can make all the difference.  Trolls are a melee faction, but are able to bring enough guns to count as more of a balanced faction.  If you like a durable faction and you like the models, then give Trollboods a try. 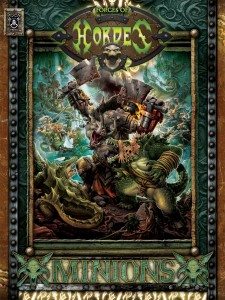 Oh Minions… if there were one faction that lacked model variety, it would be Minions.  Moreover, Minions are split into two sub-factions: Farrow and Gators.  Minions are always a dark horse option and although they are limited, they are a lot of fun to play.  A great faction for any player that really wants to avoid the mirror match.  I don’t know a lot about Minions, so the below will be short…

Gators are the more popular of the sub-factions and recently received a fantastic upgrade in their newest warlock: Rask.  He is just a boss and makes his army much much better.  Gators are also known for their principal unit, the gatorman posse.  These medium base beaters are one of the best melee units in the game and given the limited models within the faction, gator players tend to spam this unit.  If you want to play gators, you better love posse.

Farrow, I don’t really know much about farrow here.  I know that Gators are the stronger sub faction, but a stronger steamroller pairing will probably draw from Gators and Farrow for each list.

Posted on November 26, 2013 by Reecius in Editorial, Hordes, Warmachine

← Something AWESOME This Way Comes….
Signals from the Frontline: Warhammer 40K and General Gaming News, Rumors, Tactics and Jokes! →

4 Responses to “The Betrayer Speaks: A Warmachine and Hordes Starter Guide Part 3”