You are here: Home › 40K › News › Guest Review of Codex Inquisition by MadCowCrazy 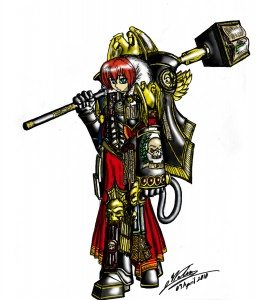 Hey everyone, Reecius here sharing a quick and dirty review of Codex Inquisition sent to us by our friend, MadCowCrazy.

figured I’d drop down a short rant about codex Inquisition. I will mainly focus on the problems with the codex so you know about them when you make your own reviews. This is mostly a copy/paste from my comment on Faeits youtube video, why rewrite it when I can just copy/paste the stuff….a theme these digital codicies all share…

The big question is if this book is, is it worth the money?

The book is riddled with problems, continuity errors and feels extremely cheap.

All Inquisitors are copy paste from codex GK

No update from codex Adepta Sororitas on Death Cult, Crusaders and Arco Flagellants.

What this means is that they are both the exact same but the AS one is cheaper, it also has A4 as it has 2CCW. Some could argue the =][= one has A5 as arco flails are technically 2CCW but it’s not listed that way. Why else would it cost more? Because all they did was copy/paste from the GK codex and didn’t bother to update it.

Priests got updated to be exactly like from codex AS, so why wasn’t Deathcult, Crusaders and Arcos updated?

They have the new Condemnor Boltgun stats from the updated AS codex so they were obviously reading it.

Banishers are missing for some reason, guess it’s because no one would be willing to spend the points for a single model with an Eviscerator if they updated the Eviscerator points cost.

I still think it’s retarded to have Eviscerators cost so much, on a S4 model I could see it but not on S3.

But Smash makes priests S10 Ap2 Armourbane with an Eviscerator! Well a Canoness doesn’t and she still has to pay the  for one as well.

Orks, DE, E and Tau should have been Allies of Convenience. We are talking about a group of people who are willing to do anything (if radical) for the betterment of the Imperium and they having picked up a few allies along the way from different races isn’t unlikely.

Desperate allies with Necrons, Chaos and CSM isn’t too unlikely either if you are using a radical Inquisitor.

All in all a very poorly put together book, they could have made it really awesome but it was nothing more than a copy/paste with a price sticker slapped on.

There was obviously no proofreading or balancing put into this codex, whoever put this together has no knowledge about the game or simply doesn’t care. This is the kind of thing I’d expect an intern to produce as a schooling project handed to him by staff.

The good stuff? Well you can field extremely cheap units in almost any army now. Almost all armies in the game now has access to Valkyries and Land Raiders. I am curious to why they are Come the Apocalypse with Orks, I do recall Inquisitors working with or hiring Freebootas or whatever the mercenary ork faction is called.

My army is based around a Hereticus Inquisitor and I was really looking forwards to this book but there was just no effort put into it what so ever. If this is the standard we can expect in the future then it’s a really shitty standard.

I guess we will be seeing a codex freebootas once the Ork codex comes out and it will be able to ally with almost anyone, except Nids ofc…

This is my rant on the codex Inquisition. No one expects (effort put into) the Inquisition!

14 Responses to “Guest Review of Codex Inquisition by MadCowCrazy”