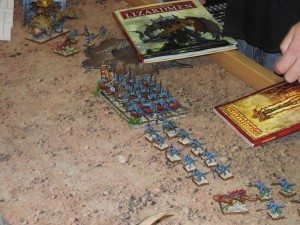 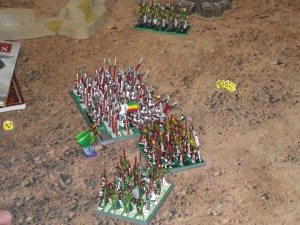 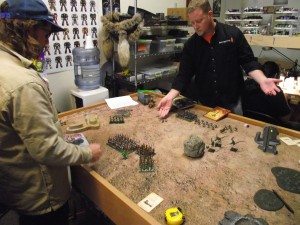 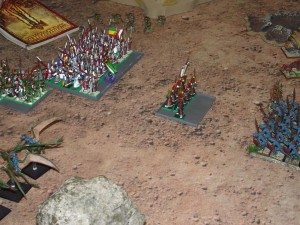 (from memory, probably upgrades and some numbers off on this)

Lizards rolled up Wildform and Amber Spear for Spells and the Elven Mage got Shem’s Burning Gaze.

Elves set up 1st with 3 blocks in the center with the Mage tucked just behind them solo.  HE Calvary on the right flank.  Lizards set up left to right Terradons, Salamander, Skinks w/ Priest, Saurus block, Salamander, Bastiladon.  The Camo skinks set up on the HE line on the right flank near the HE Calv.  The terradons vangaurd move up a bit take some cover from a big rock.

HE get turn one and the Calv march forward advancing toward the Bastilidon but wheel a bit so they can also shoot the Camo Skinks and manage to still kill 3 but they make LD and hold.  The other blocks move up a bit.  His seagaurd shoot at the Terradons and down one, but they make their LD test.  His magic phase and the mage Irrisistable Forces Shems gaze but only takes a wound, and manages to kill two Sauri.

Lizards turn one and Terradons move over the seagaurd and drop rocks killing a few and are now behind them.  The left Salamander advances and misfires and eats one crew.  The skinks and Sauri advance a bit (close enough to be a really long charge range for HE).  On the right the Camo skinks, Bastiladon, and Salamander are able to kill all but one HE Calv who runs away.  In Magic the Amber Spear was shut down and Wildform failed.

HE turn two and the Seagaurd turn to face the Terradons but with no Musician can’t fire!  The two blocks advance a bit and the mage joins the Sword Masters.  The Spearmen mach forward.  In magic the Mage Irresistible forces again this time going to Lvl 0 and forgetting the spell, but kills another 3 Sauri.

Lizards turn 2 and the Terradons fly a bit away from everything.  Skink block backs up and Sauri hold for an incoming charge.  The left Salamander kills a few Sword masters as does the Amber Spear.  Wildform is shut down.  The Camos, Bastiladon and Salamander fire into the Spearmen and kill some but there are lots more!

HE turn 3 and Spearmen charge the Salamander but fail so only move up 5″.  The Sword Masters Charge the Sauri.  The Sea Gaurd start wheeling around.  Combat goes pretty terribly for the Swordmasters and only kils 5 Sauri.  The Lizard’s on the other hand with the choppy Oldblood kill 9.  The HE fail their LD and route directly into the Spearmen.  The Spearmen also break and flee a bit.

At this point the game is pretty done and the Saurus are a 3-4″ charge from wiping the Sword Masters and Mage and the 6 Camo Skinks can charge about 2″ into the huge block of Spearmen destroying them (not sure how that happens in reality but them be the rules).

This game had some terrible luck for the HE and the Lizards making a few cold blooded rolls and watching the HE dice gods abandon them!

Posted on October 28, 2013 by Reecius in Battle Report, Fantasy