You are here: Home › 40K › Editorial › What I learned from the CFO of Enron about RAW and RAI 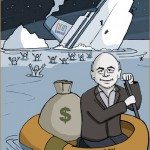 Team Zero Comp member, Vidar, writes us about an experience he had while studying for his MBA and how it relates to 40K rules interpretations.

Tonight,  I listened to Andrew Fastow describe his part in the Enron scandal a few years back.  I should probably try to stay more focused on grad school but halfway through his speech, all I could think about was the RAW/RAI debate.

For those of you who don’t know the Enron fiasco, let me recap.  Enron was an energy consortium that was named “Most Innovative Company” in the US 6 times.  Andrew Fastow won the award for Best CFO.  Then he went to jail for that same act.  What did Enron do?  Well, they looked at the rules that governed corporate accounting and circumvented them.  Teams of Alpha-male, and female, problem-solving, competitive gurus (top lawyers, auditing accountants and management) found any way possible to maximize their profits by creatively working around the rules.  In the end, many of them were convicted and jailed.

So, how does this relate to tabletop wargaming and 40k in particular?  Well, listening to Fastow, I heard things that echoed from my times playing 40k.  When asked why they did it, he stated that they were, “Just following the Rules as Written.”  No not really, but what they really said was damn close and for all intents, the same.  Am I likening RAW folks to Enron management?  Yea, I guess I am.

Now, everyone who follows the rules is not a RAW guy/gal.  Certainly not!  Why then, you couldn’t get through a game at all.  You have to follow the rules and cheating is so…lame.  No, it’s the person who uses a poorly written rule to gain an advantage over his opponent in an exploitive way.  It is the person who looks for that poorly designed rule and bases their strategy around it. Enron management acted to technically comply with rules and not consider the underlying concepts at stake.  Those concepts were good governance and ethical

“How do you know what you are doing is wrong when everyone around you says it’s ok?”  Enron management acted to technically comply with rules and not consider the underlying concepts at stake; the “Intent,” you might say.  Those concepts for Enron were good governance and ethical business.  I know, I know: ethical business, big joke.  But they translate to the gamer in the form of respect for your opponent and good sportsmanship.

GW doesn’t write its rules to leave gaps for player exploitation.  There is an underlying Intent in their rules.  The Intent is usually understood by the masses, even if the rules as written allow the circumvention of that intent.  Take the argument that “Ignores Cover” doesn’t work on vehicles because it references wounds and vehicles don’t take wounds.  Now I think that it’s fairly understandable that the intent was that shooting that ignores cover, ignores cover regardless of the target type.  Not too tough of a stretch I think, but GW issuing FAQs is like the US government in closing loopholes; slow to produce and they can’t see how creative winners will break their system until long after it’s broken.

Now there is a subjectivity in RAI application.  We all know it but that’s not what is at stake here.  What’s at stake is the integrity of the game.  Some might think this a silly game but it’s as competitive as chess and as narratively deep as any novel.  It’s a great game, and if you’re reading this for this long it means something to you.  Don’t sully it.

The decision is not what’s in the rules but what they should say.  Even if breaking the RAI because the rules–through a labyrinthine logic chain–allow them to be broken; it doesn’t mean they SHOULD be broken.  In the absence of an over-arching authority in the form of well-written and clear rules, TOs are the front line in this battle.  They have to be the local arbiters.  For the most part, I have seen a great job from these folks in preempting exploitive RAW with Tournament FAQs.  That is fine but this is really a notice to those of you who find that RAW scenario and build it into your strategy.  Consider if you SHOULD use it against your opponents.  Maybe you and Enron management are closer kin than you thought.