Up for review: Servitors! The under-appreciated, lobotomized servants of the Space Marines! As always, check out the Tactics Corner for more in-depth reviews.

Servitors are serfs and slaves of the Imperium, their minds wiped of all but the most rudimentary intelligence, tasked with menial and dangerous labor. They also accompany Techmarines into battle to assist in combat repairs and provide protection and fire support to their masters. 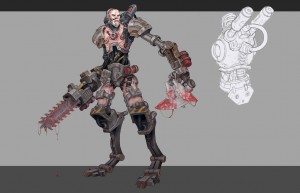 Servitors are pretty simple fellows. They can be taken as a unit for each Techmarine or Master of the Forge in your army and do not take up an FoC slot. They have middling stats, only slightly better than an Imperial Guardsman, wtih options for rather powerful weapons. However, they’re far from a competitive choice and will usually only be seen in a fluff list or for highly specialized roles in a list. That said, they can be useful when played creatively. They are also dirt cheap costing 4pts less than a Tactical Marine and pack a wallop in HtH….if they survive to swing!

Servitors are cool models, characterful, but really not that great. They do hit REALLY hard in combat for their points with a strength 8, ap1 attack each, but at toughness 3 with a 4+ they in all likelihood won’t survive to swing against the vast majority of enemy units in the game. Even Tau and IG stand good odds of taking these out before they swing with their unwieldy weapons. At their low cost though, you can stick them with a MotF or Techmarine to either serve as ablative wounds or he can tank the wounds for them, allowing them to punch something in the face. They will also take a vehicle apart like nobody’s business if they can get their greasy little paws on it!

The shooting versions suffer from BS3, although they are extremely cheap. The Plasma Cannon version isn’t a bad idea as blast weapons are impacted by crummy BS less than direct fire weapons, and if the unit overheats and dies, you really didn’t lose much. Pair them with a Master of the Forge with a Conversion Beamer and you have a decent shooting unit although the Conversion Beamer wants to be further away. They could give you some cheap firepower to protect a Techmarine or MotF who is dedicated to repairing vehicles in the backfield as well.

In a themed list, you could take 2 MotF and Techmarines and 4 units of 2 Plasma Cannon Servitors for not a bad addition of firepower for a low points investment. Just bare in mind they have to be babysat or potentially do nothing at all. In the right list, it could work but I wouldn’t take it to a tournament, personally.

That is about all there is to say on this unit. It is straightforward as all get out and while there is room for some shenanigans, not much.

← Warhammer 40K Tips, Tricks, and Dirty Tactics: Mobile Rhino Wall
What I learned from the CFO of Enron about RAW and RAI →