At last, we’ve reached the last of these battle reports! Captn Dees’ game 6 report of his GT winning performance at the Feast of Blades 40K Open! Check out the Tactics Corner for more in depth articles, reviews, tactics and bat reps!

Wait what?  IF w/ BA on the top table?  Come again?  What madness is this? 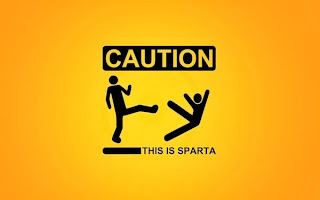 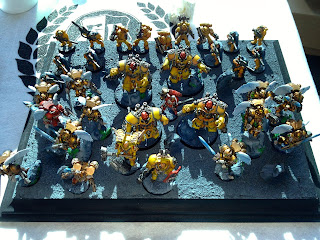 So major props to Michael for having a very unconventional army and doing quite well with it!  His only loss had been to my early opponent Ken and his “I Can’t Believe Its Not Brotherhood” Grey Knights.

Now there is some trickery going on with this army.  There is essentially a hammer and anvil to the army.  The Anvil is Lysander, Corbulo, and The Centurions.  They basically can march up the field just shredding most units (two with the Omniscope).  Lysander can tank wounds he wants to take, or for small arms fire he can Look Out Sir to Corbulo.  Corbulo has a 3+ save and 2+ FNP for himself.  So those shenanigans can tank a lot of wounds!

Then you have the hammer.  One Sang squad with Dante and the Commander and the priest.  This unit can drop down, fry something, then can again be resiliant due to EW commander for tough shots or Look Out Sir to Sang Gaurd who will have a 2+ save and 4+ FNP.

So you drive your anvil forward and your hammer comes down turn 2 (one hopes) and you smash the enemy in between them.  Now mix in some scouts in cover, another mobile Sang squad, and Tank hunting flier killing devastators and you’ve got a pretty good thing going.

Then you look at an army of Grav bikes and you cringe.  This army has a LOT of 2+ saves, and a lot of those have no Invul save.  FNP is great but you eventually fail a few of those.

So Michael’s looking over and laughing knowing this is probably not going to go terribly well.  He’s hoping a few other people do poorly and maybe he can score a few points to stay in at the top of the leader board.  I tell him we can grab a beer once the game is over!

We wins the roll to go first and it is also nightfight.  He puts one unit of scouts back on the back edge of a hill as far away from me as he can.  The Centruion anvil is right in the center ready to advance.  There are ruins on his right and he’s got his other scouts and Devs in there so everyone has got some nice cover saves for the first turn.

I put both my Thunderfires in fortified ruins in my deployment.  I line all my bikes on the line, with the Command squad in the center, 3 grav units on the left and one grav squad and the flamer squad on the right.  I infiltrate my scouts a bit ahead of that right flank in another bit of area terrain.  I scout my command unit to be behind the center hill so he’d have to work hard to see me with the Cents.  I scout my right bikes up by my scouts to start harrasing his devs and scouts turn 1.  I send the left flank scouting up behind some other hills.  This pulls them a bit far to be effective on my turn but I want that cover save from the hills.  His Centurions could seriously mess them up turn 1, so I want to try to keep them alive.

Then I steal turn 1. 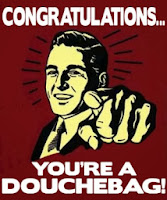 I kinda feel a bit crummy now.  I think on paper this game can’t possibly have been lost by me (not to sound arrogant or like a jerk), but now I’ve stolen and it is like insult to injury.  Michael’s laughing and being a good sport so we shake hands and get into the game.

My turn one and I figure I will just trubo boost that whole left flank further and deeper into his deployment.  Now I’m running 3+ cover (plus nightfighting) so they are not great targets for the Centurions.  I scoot my command squad just a bit on the hill, also minor turbo for cover.  My first Thunderfire shoots at his scouts on the left and just maims them.  I think I killed all but 1, and they broke off the board.  I think my other one shot at his devastators along with one bike squad on the right.  I ended up killing 3, and again I think he failed his LD and ran off the board.  My scouts and last bike squad shot at his other scouts killing a few if I recall.

In short a great use of the seize and terrible start for Michael.  Maybe I am just a jerk!

Michael’s scouts shoots some bikes and maybe manages a wound.  His Centurions pretty much advance up and split fire at my Thunderfires.  The one that is only shot by the sarg makes all his 2+ saves, but the other is blown away by all the firepower poured into him.

My turn 2 and both my Storm Talons come in and gun for his anvil.  Likewise my 3 units of grav gun bikes on the left flank all close into 17.5″, and my command squad pops over the hill with Prescience to be about 4″ away from the anvil as well.  My right flank basically closes in on the scouts, and not surprisingly wipes them.

So it basically comes down to this shooting phase at the anvil.  My orbital bombardment is dropped on Corbulo and scatters, but rerolls to hit for 4 wounds.  He Look Out Sirs them all to Lysander, but poor Lysander fails 3 3++ saves!  My Grav guns light up the Centurions, and as I’m getting his flank he can’t LOS the first batch that down the first Centurions.  Then Lysander tanks a few wounds before dying.  Then the second Cent goes down.  And finally with the last bit of shooting Corbulo bites it as well.

So at this point all he has are two Centurions who make LD and are 4″ away from being charged by the commander.

Now Michael is all smiles, but he says ‘Yep that is the game’ and it is hard to argue.  My command squad probably makes assault and kills the Centurions.  Even if they don’t make the assault the two Centurions can put the hurt down on one unit, then get smoked by Grav guns or the command squad on my turn 3.

Of course he still has his hammer and his other Sang gaurd squad as well.  The problem is they will be only shooting, and again at best they can damper two squads with shooting.  AT BEST lets say he’s wiped out 3 grav gun units to the man.  My command squad can probably duke it out with the Centurions and his Hammer at this point, and my last two bike units can probably ice the other sang gaurd squad.

I think we could have played it out and it could have been close.  That’s almost 1000 pts that is going to drop that is not to be taken lightly.

I probably would have made assault with the Centurions making one less threat on his turn 2.  There is no guarantee he would have gotten both Sang squads, but with BA it is likely.  And the chances of him really killing 3 bike squads on the bottom of 2 were pretty slim.  As it was I had first blood and warlord and it would be a miracle to not have line breaker, let alone table him.

SO we shake and I buy us a round of beer in the hotel bar.  We talk 40k, how fun the event was and Michael was a great guy to hang with for a bit.  The whole game took about 45 minutes so we had plenty of time, turned in our sheets and walked around checking out the other games. 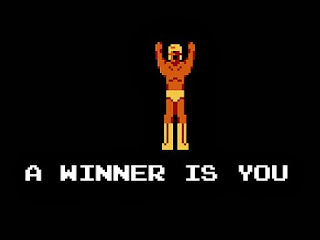 That’s how the games went down, I won this GT, and had a great time.  All of my games were all fun and all my opponents were good dudes I hope to play again!

Ed who I had the draw with in round 5 ended up beating Ken to also remain undefeated.  So he took 2nd and grabbed the ‘Best General’ with me taking ‘Best Overall’.  Which is only a little funny because we had the same record, same sportsman score, and he had better paint.  So in some ways he was I think better ‘overall’.  I on the other hand had 4 Massacres to get full points, so the more appropriate title would have been ‘Best General’.  But of course overall was decided by battle points so that’s just the way this worked out which is fine and was laid out from the start.

You can see the full results over at the Torrent of Fire site, which has some great data you can look at for this and other events.

That’s it, we’ve made it to the end of these reports!  I hope they were entertaining and informative and hope to see you all on the tabletop!